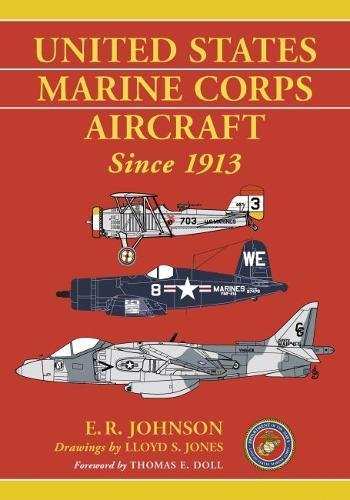 The latest aircraft reference book from E.R. Johnson is United States Marine Corps Aircraft Since 1913, published by McFarland. The breadth and depth of its content will be familiar to you if you have seen the author's American Military Training Aircraft: Fixed and Rotary-Wing Trainers Since 1916 (see https://thanlont.blogspot.com/2015/05/american-military-training-aircraft.html), American Military Transport Aircraft since 1925 (see http://thanlont.blogspot.com/2013/04/american-military-transport-aircraft.html), or United States Naval Aviation, 1919-1941 (see http://thanlont.blogspot.com/2011/06/united-states-naval-aviation-1919-1941.html). In this case, it is a 7" x 10" soft-cover 580-page book that is encyclopedic in coverage.

One of the benefits of having this book in your library is that it not only replaces but also updates some classic USMC references such William T. Larking's U.S. Marine Corps Aircraft, 1914-1959. While the only color provided is on the front cover, the reproduction quality of the more than 500 gray-scale photos is more than adequate for a book of this type. Consistent with Johnson's past practice, the photo captions add value, providing useful information.

The text begins with a relatively short history of U.S. Marine Corps aviation followed by three very lengthy sections describing, in turn, Fixed-Wing Tactical Aircraft; Fixed-Wing Transport, Trainer and Utility Aircraft; and Rotary-Wing Aircraft. If Johnson missed describing (specification, summary description, usage, Lloyd S. Jones multi-view drawing) any one of these, it would be very obscure indeed. Coverage is complete up through the Lockheed Martin F-35B and includes the still-borne McDonnell Douglas A-12.

Eight appendices provide summaries of Unmanned Air Systems; Aviation-Related Ships; Aviation Installations; Aircraft Squadrons and Aircraft Assignments,;Aviation Unit Organization; Organizations of Expeditionary and Amphibious Operations; Aircraft Weapons and Tactics; and Aviation Designation, Terms and Abbreviations. A very useful Glossary and Index are included and in the event that the reader wishes to delve more into the subject, there is a very lengthy Bibliography.

USMC Aircraft since 1913 can be ordered from McFarland's website (www.mcfarlandpub.com) or by phone (800-253-2187. It is also available as an ebook from all major ebook providers. See https://mcfarlandbooks.com/customers/how-to-buy-ebooks/ for a list.
Posted by Tailspin at 5:28 PM