Early on, even before there were ejection seats in jets, the U.S. Navy established a relationship with Martin-Baker, a company located in England and dedicated to the development of the ejection seat. Two of its officers went there in 1945 to witness ejection seat testing. Although the Navy continued to rely on its airframe contractors to supply ejection seats when required, its specifications favored the Martin-Baker design philosophy of face-curtain activation of the seat.While it didn't buy Martin-Baker seats for various reasons at the time, it did purchase a trainer/test rig from M-B and required their airplane contractors to furnish seats that were fired with the M-B type face curtain (the Air Force used triggers located on the seat's arm rests). 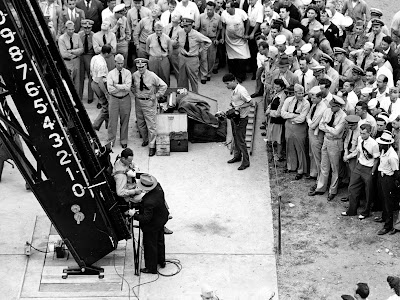 The man in the fedora is James Martin, later knighted as Sir James, visiting the Philadelphia Navy Yard in August 1946 where the Martin-Baker test rig had been installed.

The early ejection seats were simply bailout assists. Even after features like automatic seat separation were added, a survivable ejection had to be initiated at least 500 feet above the ground, much more if the airplane had a high sink rate. Ejection during takeoff or final approach was not an option.

Martin-Baker was dedicated to improving the seat capability and in the mid-fifties succeeded in qualifying a seat system that resulted from a survivable ejection on the runway at speeds above 100 knots. In 1956, BuAer contracted with Grumman to install the new Mk4 M-B seat in an F9F-8T for a demonstration. Flying Officer Sidney Hughes, RAF, successfully ejected from it at Patuxent River in August 1957 while on the runway at 120 kts. 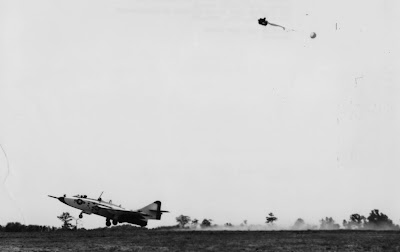 This successful demonstration resulted in a Navy contract with Martin-Baker for the Mk5 seat, which was a strengthened version of the Mk 4 from a crashworthiness standpoint. (An actuator loop was also added at the front of the seat pan to expedite ejection if required, such as an emergency during catapult launch, or when g-levels made reaching the face-curtain loops difficult.) Most in-service Navy fighters with ejection seats were changed over to the new seat, either in production or as a retrofit. It took a few years because each installation had to be developed and certified by Martin-Baker. The seats were somewhat tailored to each aircraft type and therefore identified by a prefix letter, e.g. H5 for the F4H, F5 for the F8U, and P5 for the F4D (shown here). 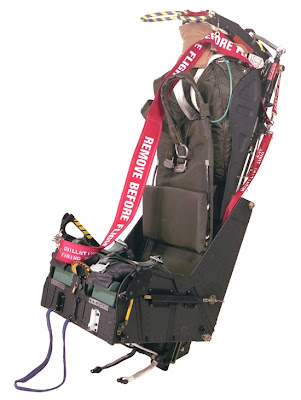 The changeover appears to have begun with the single and two-seat F9F Cougars in the training command.  The first F9F-8T ejection on Martin-Baker seats was in September 1958. The first Cougar ejection was in November.

Martin-Baker seats were installed in F3H BuNos 146709-146740 at the factory. The first ejections using a Martin-Baker seat from the F3H reportedly occurred in March 1958 with the last in a McDonnell seat in November 1960.

The F-4 Phantom first flew with a McDonnell seat but it was quickly supplanted by the M-B Mk 5 seat in production, probably in 1960 with the second block of production airplanes. (For more detail on the change to Martin-Baker seats in general and the F4H in particular, see http://phantomphacts.blogspot.fr/2013/10/f4h-phantom-ii-ejection-seat-history.html.)

Vought was reluctant to admit that the M-B seat was better than its own (although they did install a M-B seat in the third F8U-3 which flew in late 1958). Its seat was a modification of the Douglas Escapac seat which also provided survivable ejection on takeoff and approach. However resistance was futile. M-B Mk-F5s were installed in F8U-2s toward the end of their production run and retrofitted to surviving F8Us.  (Contrary to some reports, a cockpit console width change was not required, only different rails and catapult fittings plus stiffening of the bulkhead;  M-B assembled the F5 with a narrower seat pan.)

LTjg John T. Kryway cut it a bit fine with the M-B seat but survived after his hard landing on FDR in October 1961 necessitated jettisoning his F8U-1: 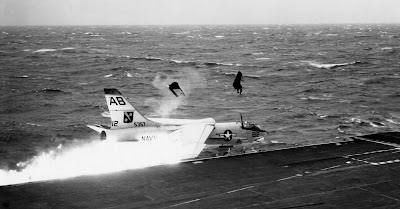 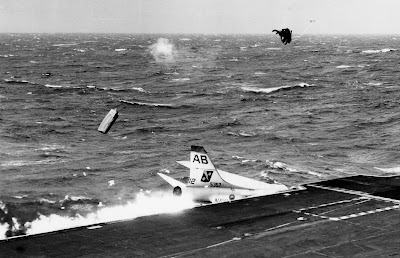 The North American FJ-4s appear to have begun to be switched over in early 1961 at the first or second major overhaul after late 1960. The first reported ejection using the Martin-Baker seat was in September 1961. If you don't have a photo of the specific aircraft being modeled, the best bet is the original seat. The earliest example that I found of a MB seat in the FJ-4 is VA-144's 3rd deployment, November 1961 to May 1962. However, there is a picture of a reserve FJ-4B dated July 1963 with the original seat.

No M-B seats appear to have been installed in F4Ds during production at Douglas, but most survivors were eventually converted to the Mk-P5 during an overhaul.

One notable exception to the changeout to M-Bs was the F11F Tiger. A quantity of 201 seats was procured for the Tigers but they were not installed, with the exception of two F11Fs subsequently pulled out of long-term storage for an in-flight thrust reverser program.

Martin-Baker demonstrated its zero-zero seat in 1961, with the Navy procuring it in 1965 as the Mk7. The performance increase was accomplished by the addition of a rocket. 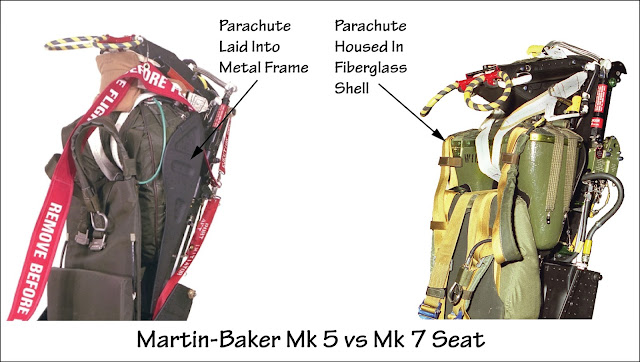 There were however, many detail differences in the headrests, ejection-initiation handles, seat cushions, straps, among the seats installed in different aircraft, services, and countries. For example, the Martin-Baker seat in a U.S. Navy F-4 was not identical to the one in a U.S. Air Force F-4. The one in the British Phantoms (the right one in the illustration above) was a third configuration.

The changeover to the Mk 7 seat in U.S. Navy fighters began in late 1967 or early 1968 with Mk 5 seats being modified to the Mk 7 configuration. The first F-4Js were produced with Mk 5 seats (deliveries with Mk7s reportedly began in December 1967) and then retrofitted, as were F-4Bs; the changeover was reportedly complete by 1970. (The last RF-4Bs were reportedly delivered with the Mk 7.) The F-8J conversions from F-8Es included the installation of the F7 seat. The Hs (rebuilt F-8Ds) after mid 1968, and all Ks (rebuilt F-8Cs) and Ls (rebuilt F-8Bs) models were also delivered with the F7 seat.
Posted by Tailspin at 12:04 PM 1 comment:

The Conception of the F8F Bearcat

The interweb would have you believe that the F8F Bearcat resulted from a Grumman evaluation of the Focke-Wulf Fw 190 accomplished in early 1943, possibly even at Grumman's facility at Bethpage on Long Island, New York. 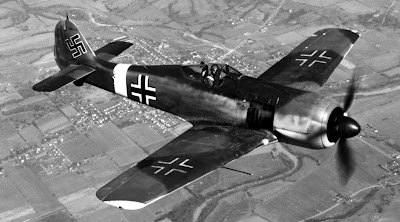 There is a report of a captured FW 190 arriving at Wright Field, Ohio in August 1943. However, it seems very unlikely that it would have passed through Bethpage first for an evaluation by a Navy contractor, although I'm sure that it would have been a closely held secret if it did.

As best I can determine, the F8F originated with a memo from Roy Grumman to Chief Engineer Bill Schwendler dated 28 July 1943 requesting a predesign of a small fighter built around the most powerful R-2800 engine available and providing some additional guidelines. It was reportedly the result of previous discussions between those two dating back to at least late 1942.

A predesign drawing by Dick Hutto dated 20 August 1943 indicates that the basic size and shape, including a bubble canopy, of the Grumman G-58 were well established by then. 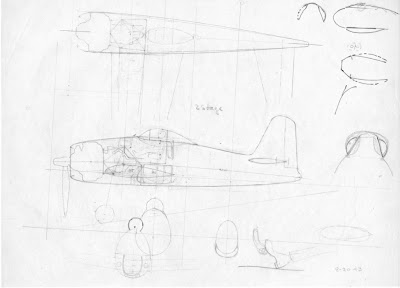 The story that seems more credible (and supported by contemporaneous documentation) is that Grumman's Bob Hall and Bud Gilles went to England in September 1943 to fly a captured Fw 190. I haven't seen Hall's report, but they were undoubtedly impressed by its speed and maneuverability. It seems likely that they would have returned to Bethpage with the intent to match, if not exceed, its  performance and handling qualities with the new Grumman fighter that they had already envisaged.

It therefore seems almost certain that the basic philosophy that shaped the F8F was not the September FW 190 flight evaluation but the result of 1942 combat experience in the Pacific vis-a-vis the Mitsubishi Zero, the need for what amounted to a fast-climbing interceptor, and the requirement for a fighter the size of a Wildcat to operate from the small decks of the newly created escort carriers.

The Navy ordered prototypes of the G-58 in November 1943 and designated it the F8F. The first one flew only nine months later, in August 1944. Deliveries of the first production aircraft were made in February 1945.

However, the first air group equipped with F8Fs arrived in the Pacific just days too late to participate in the war. (In fact, it was first Navy carrier-based aircraft initiated after Pearl Harbor to get that far; most were canceled before reaching fleet squadrons.)  Within a few years, it was supplanted by jet fighters and relegated to a training role.