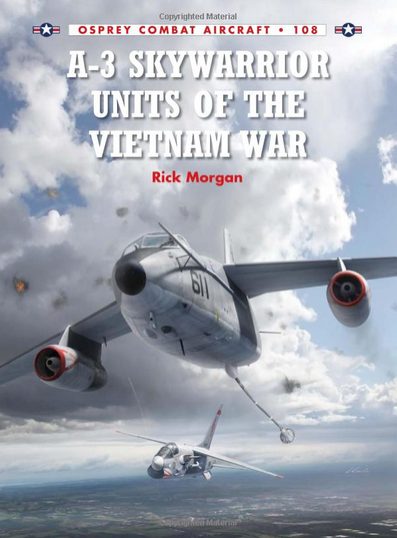 If you have any interest in Whales, naval aviation, or the Vietnam War, you should buy this book. While the title seems to limit it to the Vietnam War, Rick also summarizes the airplane's origin story and post-Vietnam career. For more of what it includes and some five-star reviews by people who know what they're talking about, look it up on Amazon.

Posted by Tailspin at 1:35 PM No comments:

On 25 March 1955, the Vought F8U-1 flew for the first time. I almost missed joining the celebration. For an excellent and well-illustrated example, see here: http://voughtworks.blogspot.com/2015/03/xf8u-1-crusader-at-60-part-v.html

The milestone was even more significant because it included breaking the sound barrier. First flights are usually planned to minimize risk, with the primary objective being photos, not envelope expansion. And in this case, supersonic flight was not only not a sure thing but the ability to do so, somewhat of a concern.

Richard Whitcomb of NACA experimented in early 1952 with reducing transonic drag by what he described as the area rule. The concept was that an airplane's total cross-section (area), including the wings and empennage, needed to smoothly increase and then decrease along its length. Because even a swept wing resulted in a fairly abrupt increase in cross section, that meant that the fuselage cross section had to decrease to compensate. He published a confidential paper on his theory and wind tunnel test results in September 1952.

Grumman engineers had already postulated the same theory and applied it to a fighter design study in late 1951. Note the distinctive fuselage "Coke-bottle" shape.* 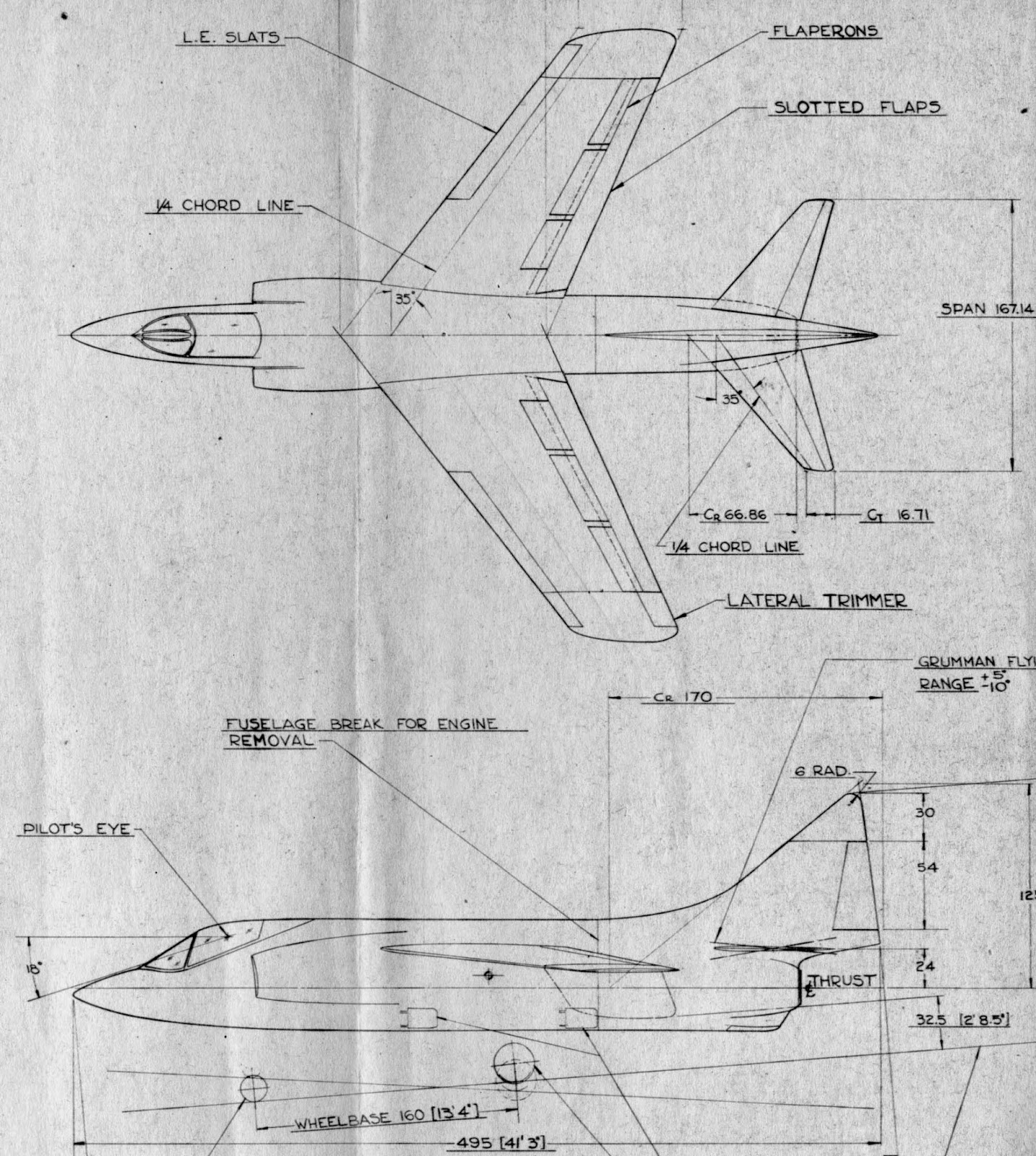 The unsolicited proposal included the following illustration, clearly a representation of the area rule:

Convair was in the process of designing a new delta-wing fighter, the F-102, for the Air Force in 1952. Their wind tunnel testing indicated a significant drag problem at transonic speed that proved to be correct in flight test in 1954. As a result, they had to delay flight test and production in order to reshape the fuselage in accordance with area ruling to reduce drag. 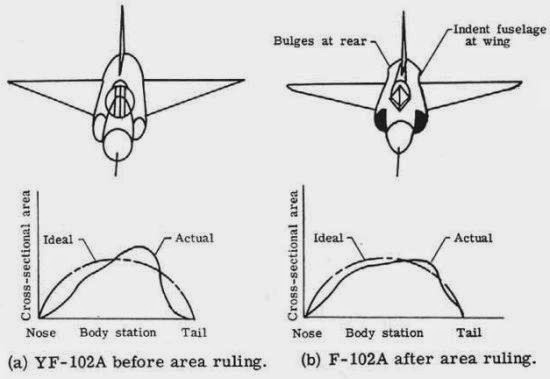 The delta wing created a large peak in the overall cross section near the wing's trailing edge that had to be offset by indenting the fuselage and adding bulges aft of the wing to more smoothly taper down the cross section.

Vought won the 1952 competition for a Navy day fighter with an innovative design that included a variable-incidence wing. It did not take into account area ruling, which at that point was still a theory backed up by wind tunnel test of notional models. 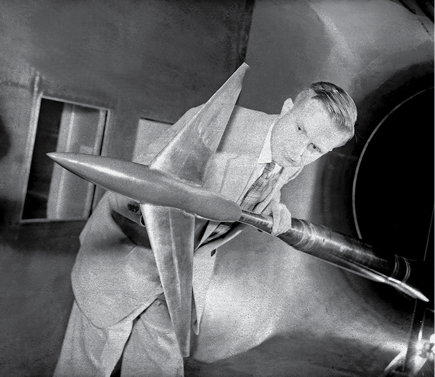 The Navy awarded Vought a contract for the F8U in mid-1953 and encouraged the company to consider incorporating the area rule. After careful consideration and evaluation of its wind-tunnel test predictions, Vought was not inclined to do so. The necessary shaping of the fuselage cross-section was onerous from a weight and manufacturing cost standpoint; it also affected the internal volume needed for fuel. NACA tentatively agreed that the high fineness ratio of the F8U and its relatively thin wings probably sufficed from an area-rule standpoint.

In late 1953 and early 1954, however, the results of NACA wind-tunnel and rocket-propelled F8U model testing at transonic and supersonic speeds indicated that drag was likely to be higher than Vought had projected. 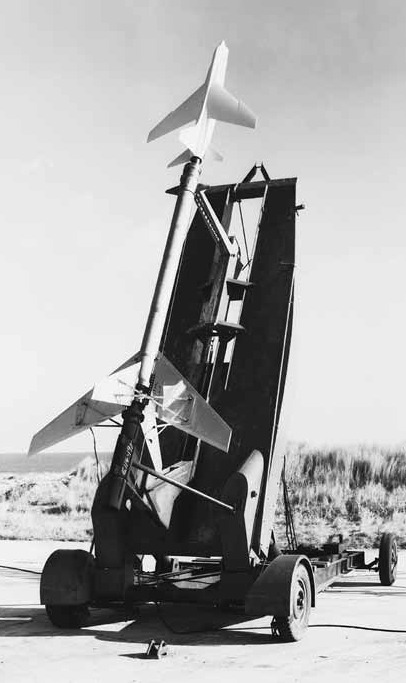 Vought began to take the problem seriously and define changes to take area rule into account, but like Convair, successfully lobbied to not make major changes in the prototype in order to fly on schedule. According to a NACA memo, these would be evaluated in wind-tunnel test with the intent  of incorporating them in production at ship #75.

Before first flight Vought was able to sharpen the forward fuselage by extending the nose cone about three inches (it had become shorter and more bulbous than shown on the mockup), reducing the size of the canopy, and incorporating a sharper inlet lip.

(It's not clear when the cannon were relocated aft; that may have occurred before the area rule improvements, possibly for weight and balance.)

The aft fuselage was reshaped and extended as well to smooth the decrease in cross section.

As it turned out, the NACA test results were pessimistic and these initial changes proved to be all that were necessary, along with the fact that the combination of long slender forward fuselage of the F8U, lack of bubble canopy, and the close coupling of the empennage to the wing resulted in a shape not far from the ideal one. The additional changes were cancelled.

Vought management and engineering must have been greatly relieved, particularly after Convair's struggle with the F-102's excessive drag. Ironically, the competition, Grumman's beautifully area-ruled F11F Tiger that resulted from its 1951 design study, lacked both performance (it had a less powerful engine) and also enough internal fuel, unlike the F8U. (Also see http://thanlont.blogspot.com/2009/02/area-rule.html)

Vought learned its lesson about area rule, however. When incorporating the camera installation in the photo-reconnaissance variant, F8U-1P, it was taken into account. See http://tailspintopics.blogspot.com/2013/12/photo-gator.html

* A "Coke bottle" shape is aptly descriptive to those of us of a certain age: 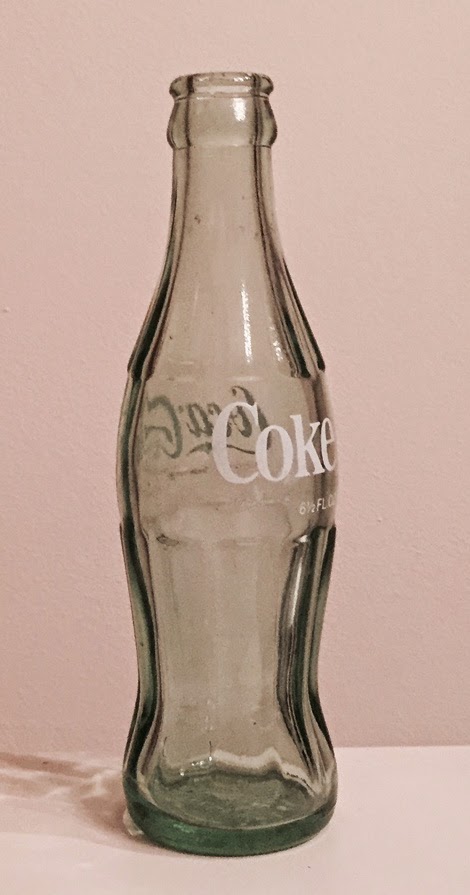