In November 1944, the recently commissioned Shangri-La was used to conduct carrier evaluations of three aircraft, a Grumman F7F-1 Tigercat, North American a P-51 Mustang, and a North American PBJ-1H Mitchell. Click here for one report on the trials of the F7F and PBJ: http://steeljawscribe.com/2007/10/05/flightdeck-friday-more-oddities. Click here for my post on the Navy's involvement with the P-51: https://tailspintopics.blogspot.com/2011/06/seahorse.html

The otherwise stock PBJ-1H was modified to have a tail hook, catapult provisions, and main landing gear struts that could be swiveled 90 degrees so that it could be lowered on the deck-edge elevator and rolled sideways into the hangar. 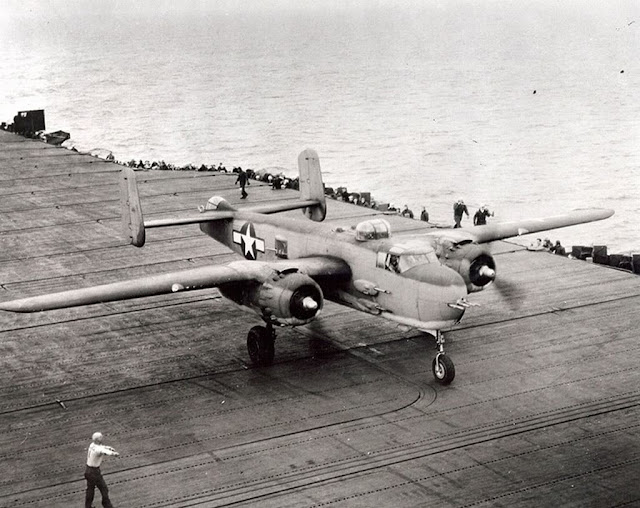 Contrary to the "more-oddities" post, the PBJ did not have an SBD tailhook, per se. It would have been too short and possibly under strength. For some reason, the Mitchell's tail skid was deleted when the hook was added.

Catapult provisions included the standard hooks and hold back attachment:

Although the "more-oddities" post states that it was an additional evaluation of the carrier suitability of a tricycle landing gear airplane, my guess is that it was an improvement on a plan to use PBJs for close air support of landings on the Japanese main islands. The concept was to launch them from an aircraft carrier, à la Doolittle, and have them land back at an airfield for turnaround and to be craned back aboard an aircraft carrier to repeat. For one thing, an evaluation of carrier takeoff and landing suitability did not require a demonstration of the ability to strike a dud below deck.