The rise and fall of the Westinghouse Aviation Gas Turbine Division is a fascinating story, worthy of being a Harvard Business School case. I posted a summary here: http://thanlont.blogspot.com/2011/03/from-hero-to-zero.html and have also written about it in my books, Air Superiority and Strike From the Sea. However for the complete story on the fiasco that was the Navy's J40 engine program, this is the book, available from Amazon where you will see two five-star reviews and also at Barnes & Noble as well as overseas distributors.: 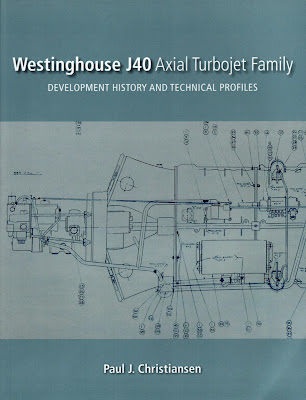 Fair warning: it's detailed, technical, and comprehensive even by my standards, literally a blow-by-blow description of the engine and its development, down to the level of individual parts. There is relatively limited discussion of the airplanes it powered and the difficulties it caused in their development.

Nevertheless,  if you have significant interest in early 1950s U.S. Navy jet fighter programs, this is a book to have. I particularly appreciate that—unlike the usual publication for aviation enthusiasts that relies on the content of previous books and articles on the subject and obvious (and too frequently wrong) internet posts—Paul has taken the time and trouble to find and incorporate information from primary sources at the Smithsonian Air and Space Museum, the National Archives, and the Hagley Museum and Library, among others.

My understanding is that Paul is currently writing a similar history on the Westinghouse J46, which was only marginally more successful than the J40. I look forward to it with great anticipation.
Posted by Tailspin at 12:37 PM 1 comment: