This is a work in progress...

The carrier plane-guard role dates from the very first operation of airplanes from ships. The destroyer Roe was reportedly assigned that duty for Eugene Ely's takeoff from Birmingham on 14 December 1910. 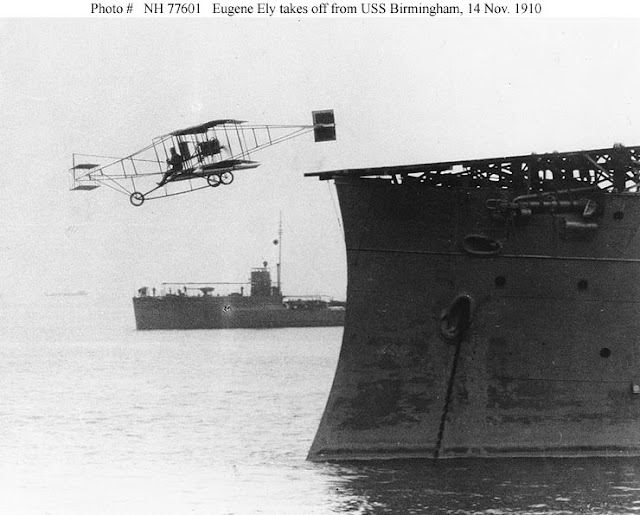 The plane-guard ship trails and/or leads the carrier in order to be into position to heave to and lower a boat for pickup of an airplane's crew when a crash occurs. Here, an OL-8 is landing aboard the first Lexington in 1929 with the plane-guard seen maintaining station in the lower right-hand corner of the picture. 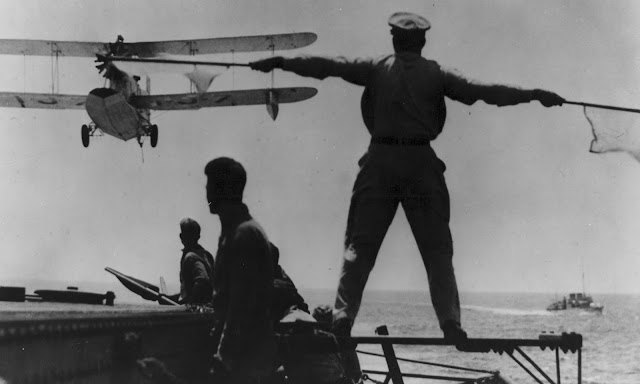 Even experienced aviators occasionally had need of rescue. Here, LCDR Lindsey, CO of VT-6, has crashed his TBD Devastator while attempting to land on Enterprise on 28 May 1942, just prior to the Battle of Midway. The plane guard, Monaghan, is maneuvering into position to launch a boat to pick up Lindsey and his crew.

What is surprising is that it took so long for the Navy to realize that the helicopter was a much better solution for plane guard. Sikorsky had already added a rescue hoist to one of its helicopters in 1944. Igor himself was one of the first to evaluate it. 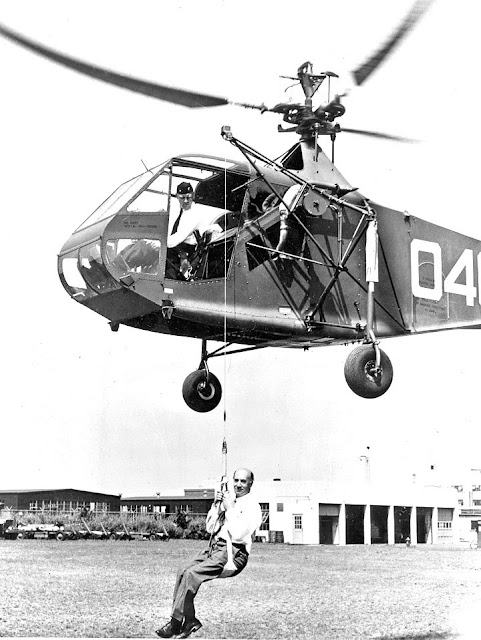 On 29 November 1945, a hoist-equipped Army helicopter piloted by Sikorsky chief test pilot Dimitry D. (Jimmy) Viner and crewed by Army Captain Jackson E. Beighle was used to make a daring rescue of two crewmen in stormy conditions from a barge aground on a reef off Fairfield, Connecticut. 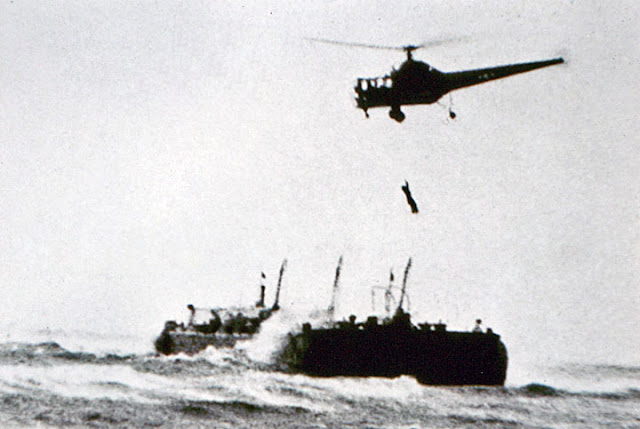 The Navy did buy and utilize these early helicopters immediately after the war for utility missions but these did not include plane guard. Sikorsky finally volunteered the use of one of its new, civil-registered S-51 helicopters piloted by Jimmy Viner for an at-sea trial. 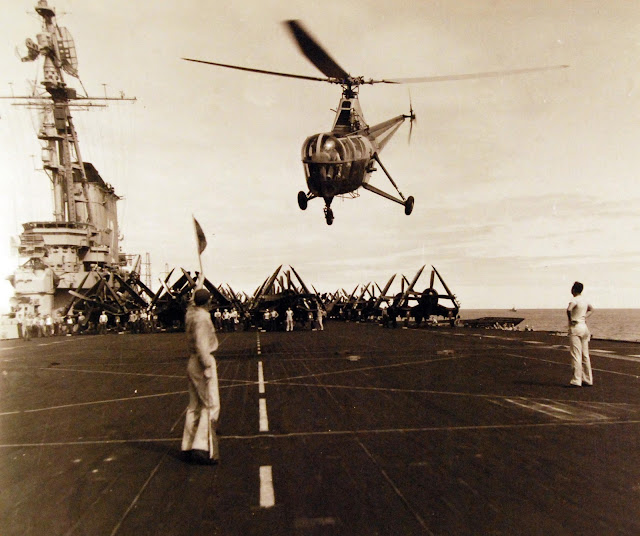 His first rescue was of LT Robert A. Shields on 9 February 1947, after he had to ditch following the failure of his SB2C's engine. A second rescue was required when Viner was flying plane guard and an SB2C crashed on approach to Franklin D. Roosevelt. Two more rescues would be accomplished before the end of the month.

After that, virtually every Air Group Commander wanted an HO3S, the Navy designation for the S-51, assigned to his carrier for plane-guard duty. However, the HO3S was constrained both by payload and center of gravity limitations (its cabin was well forward of the rotor) for the role. As a result, the Navy had a competition for a bespoke plane-guard helicopter that was won by Piasecki with a variant of its two-rotor configuration. It was designated HUP. 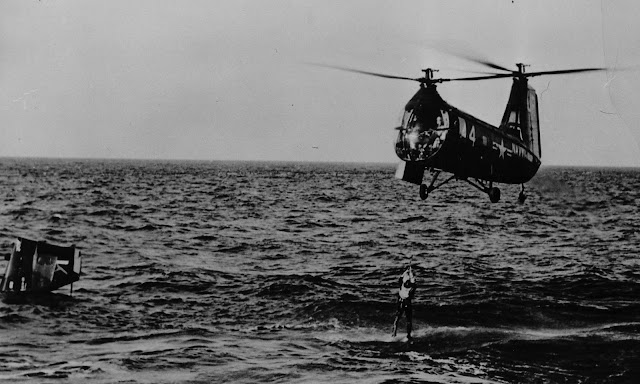 For a hoist, the right seat was removed the hatch below it opened through which the rescue sling was lowered and the rescuee was retrieved. 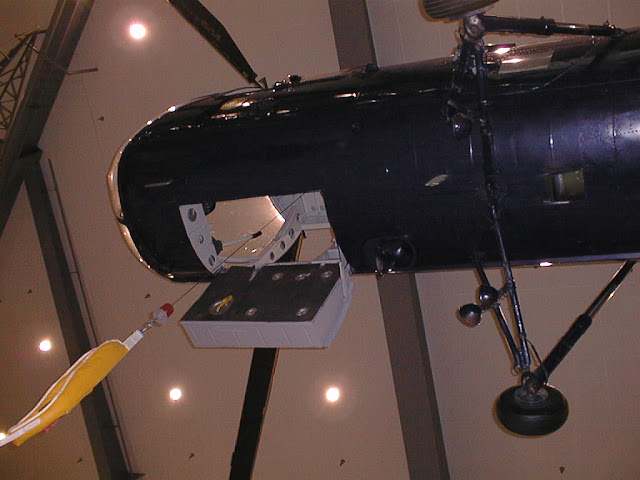 The crewman stood ready to assist the rescued man into the helicopter and keep him from grabbing the engine controls on the center console.

As Alex noted in his comment below, the Kaman HUK (UH-43C) was also used occasionally for plane guard. 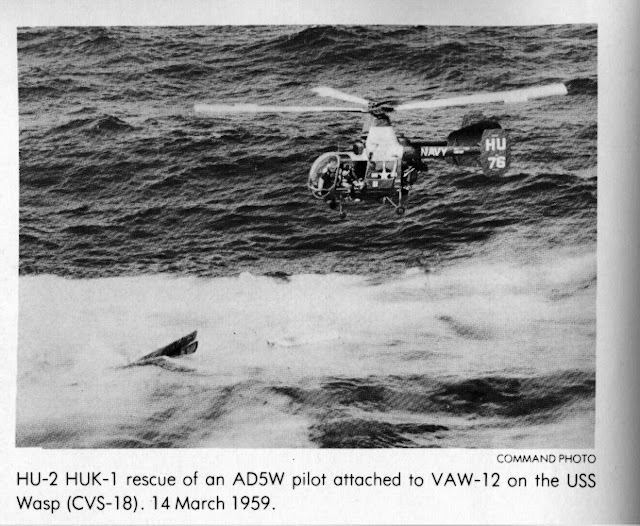 Its intermeshing two-rotor system provided the benefits of the twin-rotor helicopter (excellent hover efficiency and indifference to wind direction) but was much more compact.

As Alex also noted in a comment, the ASW air groups would use one or more of their helicopters for plane guard, since they could be readily equipped with the requisite hoist. This is an HO4S hovering for a pickup in a training/familiarization exercise. Note the dye marker in the water and the smoke float in the background to indicate wind direction. 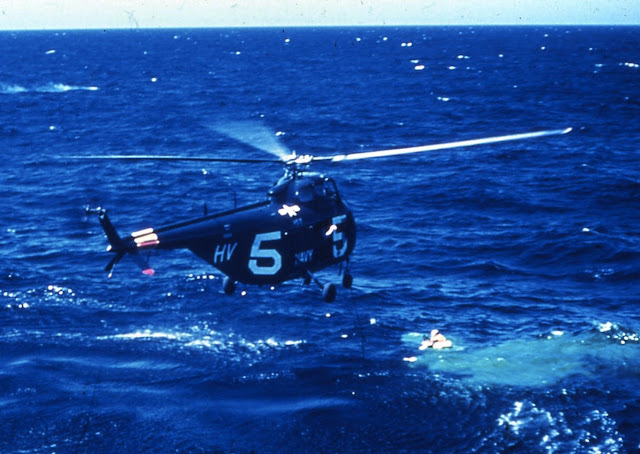 When the HO4S was replaced by the HSS in the ASW helicopter squadrons, it was similarly utilized. Note the large warning to "Abandon Chute" under the cabin door. 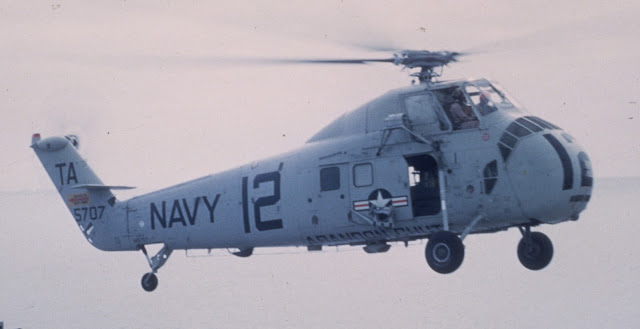 This was dictated after a failed attempt to hoist a pilot after his parachute inadvertently deployed. 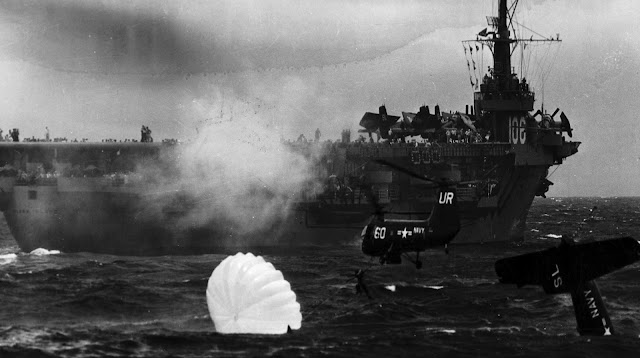 The pilot either released himself from the sling or got pulled out. He was subsequently rescued by a whaleboat from the carrier.

Even without the pull of an open parachute, the HUP was underpowered. What's worse, what power that there was provided by a former tank engine that was failure prone. The ultimate solution for the helicopter in general and the plane-guard helicopter in particular was the turbine engine. It was light relative to the piston engine and small, which allowed for the cabin to be located directly under the rotor, eliminating the center-of-gravity concern. Kaman won that competition with its first single-rotor design. It was designated the HU2K, which in 1962 was changed to H-2. 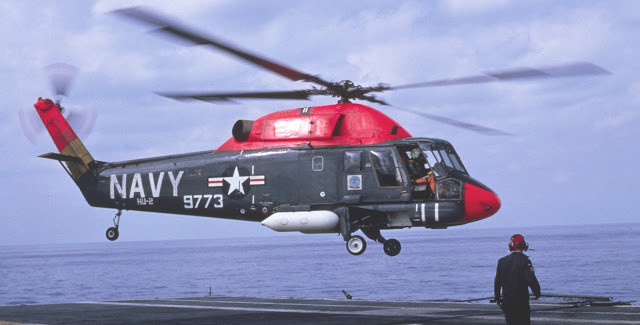 It was sleek and fast, with a retractable rescue hoist in the cowling above the cockpit. One innovation, which did not prove lasting, was a boom-deployed rescue net for scooping up a rescuee. 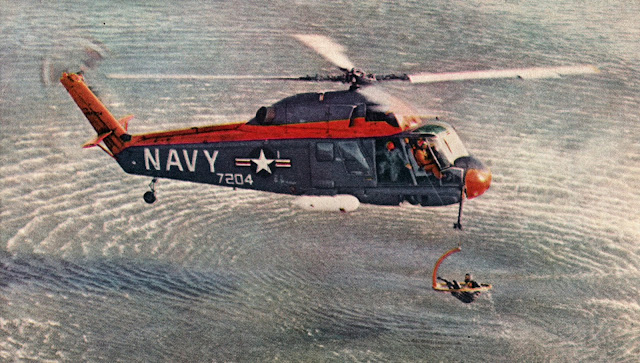 Although there were teething problems, these were overcome and the Seasprite eventually was powered by two engines. However, the elimination of the ASW-dedicated aircraft carriers resulted in the addition of ASW helicopters to a big carrier's air wing. Since the SH-3 came with a rescue hoist, the HS squadrons were assigned the collateral duty of plane guard, resulting in the retirement of the H-2s. 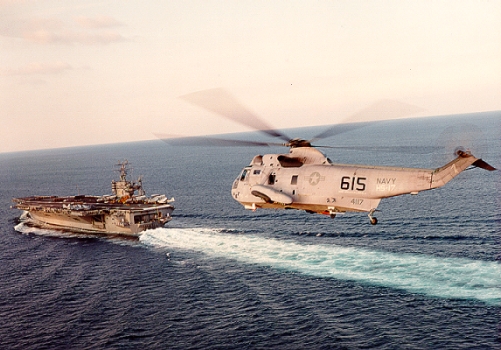 The H-3s, in turn, were eventually replaced by multi-mission Sikorsky H-60s. 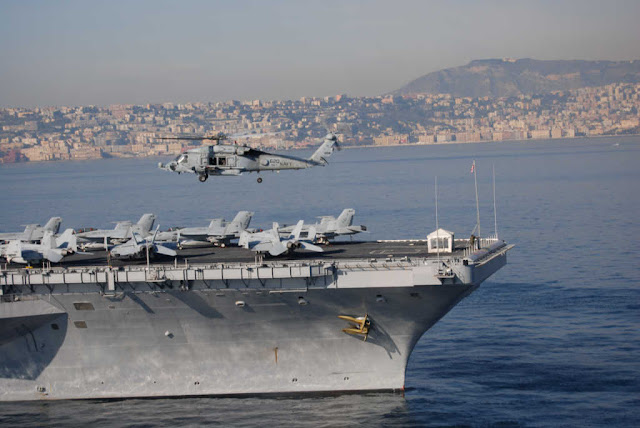