In it, I mentioned the TF-1, which was the Carrier On-board Delivery (COD) derivative of the ASW S2F as the WF-2 was the AEW derivative of the S2F. I also wrote about the TF-1 in my summary history of COD, http://thanlont.blogspot.com/2011/05/carrier-onboard-delivery.html 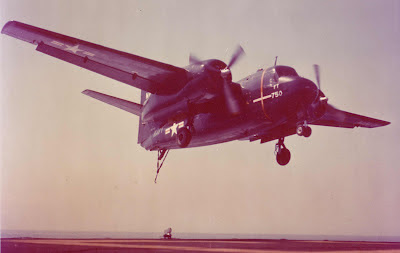 It turns out that for some reason, the Navy decided that it would be designated a trainer. And of the five missions listed on the TF-1 SAC, three are training, including the first two:

Of course, it would have been a lot cheaper to build S2Fs without the mission equipment and designate them S2F-1Ts. It would have (and eventually did when the early S2Fs were replaced with more capable S2Fs) been capable of all those missions, albeit with less volume for cargo/passengers and a cabin door smaller than a car's. It wouldn't, however, have been capable of resupplying a carrier with a nuclear weapon the size of the Mk7, which if I remember correctly, was the actual raison d'etre of the TF...
Posted by Tailspin at 3:55 PM 3 comments:

This post is the result of a question posed to me by Angelo Romano, which was both surprising and pleasing. Normally it's me asking Angelo for something and I appreciated the chance to return the favor.

The request was to identify the unit to which this SB2C-4E was assigned. The picture was reportedly taken after the war, possibly at NAS Atlantic City in 1947.

Via Steve Eisenman
It has been published in various places and the aircraft (or one numbered 47) has even been the subject on decal sheets for modelers, with the assigned unit either identified as VS-31 or stated to be unknown.

The camouflage and markings are unusual. First, it is one of the two so-called Atlantic schemes for ASW aircraft commonly seen on TBF/Ms, SBDs, and FMs but almost never on an SB2C. Second, there is that "XVF" marking on the side, where a unit designation would sometimes be at the time.

The unit to which it was formerly assigned was almost certainly VS-31, with the S at that time standing for Scouting, not ASW. (ASW squadrons then were typically designated VC for composite, meaning they operated more than one mission type of aircraft.) VS-31 was an inshore patrol squadron and did not deploy on an aircraft carrier. According to author Marc Frattasio, "VS-31 flew SB2C-4Es from NAS Squantum from the end of 1944 through May 28th 1945. During that time the squadron operated detachments at NAS Atlantic City, NAS Norfolk, and possibly other locations. Previously, the squadron had operated a detachment at NAS Brunswick. To the best of my knowledge VS-31 was the only unit to operate SB2Cs in the Atlantic ASW color scheme." (Marc literally wrote the book on NAS Squantum: see http://www.gis.net/~fm/squantum.htm)

That, however, does not explain the XVF marking. It turns out that on 15 June 1945, the "Navy established Experimental Development Squadron Two Hundred (XVF-200) and Experimental Utility Squadron Twenty Five (XVJ-25) at Naval Air Station Brunswick, Maine, to provide, under the direct operational control of Commander-In-Chief (COMINCH), flight facilities for evaluating and testing tactics, procedure, and equipment for use in special defence tasks particularly those concerned with defence against the Kamikaze."

XVF-200 was assigned F6F-5s and F4U-4s. One might wonder why no Goodyear F2G Corsairs were assigned, since it was purportedly developed specifically to counter the Kamikaze. As it happened, the F2G program began before the Kamikaze tactic became evident in late 1944 so that wasn't its raison d'etre, at least originally. (My tongue-in-cheek explanation is that someone in BuAer wondered how fast a Corsair would go when powered by the humongous P&W R-4360.) And only a handful had been built and flown at the time, whereas the fleet needed to deal with the threat with what they could had or could get right away.

From the collection of Joe Genne via Rob Mears

(Rockland was NAAF Rockland, Maine. At the moment, I don't know what a WF6-3 is; it's apparently not a typo because there were about 450 in the replacement pool on Guam...)

It would appear that at least a few of the SB2C-4Es were transferred to XVJ-25 from VS-31 when that unit was disestablished.

At some point in late 1945, certainly by 25 January 1946, the date of the USN Aircraft Location Report that Angelo provided to me,  XVF-200 was relocated to NALF Fentress, Virginia and XVJ-25, to NAS Atlantic City

Sometime before the date of that report, possibly as a result of that relocation, XVF-200 had also been assigned 12 SB2C-4Es in addition to those being operated by XVJ-25. It is likely that one of these, a former VS-31 airplane, is the one in the picture.

According to Angelo, who has better and more organized files than I do,  XVF-200 was subsequently disestablished on 15 March 1946 so strictly speaking, if the picture was taken in 1947, it wasn't at the time assigned to XVF-200. (The snow also suggests Maine in late 1945 or January 1946 although it's not unknown in New Jersey.) XVJ-25 was redesignated VJ-20 on 7 March 1946 and and eight days later, became VX-2. That caused me to correct my blog post on VX squadrons (http://thanlont.blogspot.com/2010/07/vx-squadrons.html).
Posted by Tailspin at 5:27 PM 3 comments:

A doomed VT-8 crew taking off on a one-way mission to attack the Japanese carriers off Midway on 4 June 1942.

Once upon a time, a friend loaned me a computer game that replicated, in some detail, the battle of Midway. I played it several times, me controlling the U.S. forces and the computer, the Japanese. Even knowing the initial disposition of the Japanese forces, which the U.S. Navy had to determine by scouting, I got my butt kicked every time. The superior range of their scouts and strike airplanes was one of the deciding factors. And yet the Americans prevailed in the battle, arguably the turning point of the Pacific war. I put it down to mostly luck but there was more to it than that. Here is an excellent synopsis of some of the other factors if you don't have time to read a book like Shattered Sword..
Posted by Tailspin at 9:22 AM 2 comments: