The Way It Was 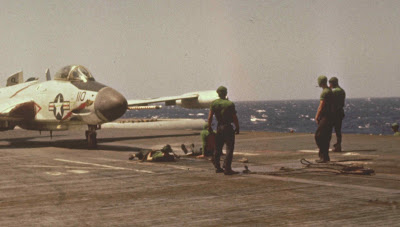 The bridle is already positioned on the catapult shuttle and two green shirts are waiting for the F2H to taxi forward into position for hookup. The catapult hooks are located on each side of the fuselage just aft of the engine inlets at the juncture of the fuselage and engine nacelle. The two green shirts lying on the deck have the holdback pendant. The Banshee taxis over them to be in position for the hookup on the aft fuselage. After the green shirts connect the bridle and holdback to the aircraft, they will stay there until the shuttle is tensioned to insure that the whole lash up stays in position, as shown here on an A3J-1.

Posted by Tailspin at 9:15 AM No comments:

Up until the early 1960s, catapult launches were accomplished by connecting the aircraft to the catapult shuttle with a heavy cable, called a pendant or a bridle depending on the hookup configuration. A separate hookup held the aircraft from moving even under full power until the catapult fired and a weak link in the holdback failed with the increase in pull.

This was hard, dangerous work. The cables were heavy and the hookup point on the aircraft generally uncomfortably close to the jet engine inlets or the propellers. The holdback connection was under the aft fuselage, just forward of the jet engine exhaust, a dark, dirty, noisy place, usually requiring a very low squat to access the fuselage hookup point.

The replacement was the addition of both the catapult and holdback hookups onto the nose landing gear. Grumman developed the concept and introduced it with A-6 Intruder and the E-2 Hawkeye. The launch bar was located on the front of the nose gear strut and could be raised and lowered by the pilot; the holdback connection was on the aft side of the nose gear strut. 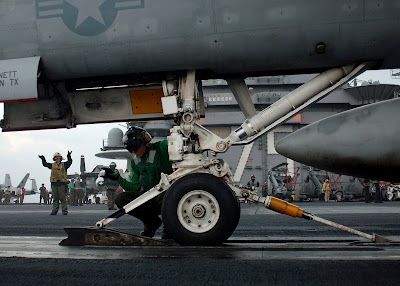 The pilot simply taxied forward onto the catapult hook up point and lowered the launch bar. The green shirts then attached the holdback bar (color coded for each aircraft type) to the aircraft and the deck and signaled for the shuttle to be moved aft until the front end of the launch bar was positioned in the cavity at the front of the shuttle. The shuttle was then moved forward to fully engage the launch bar and establish tension. Once the pilot was ready; full takeoff thrust applied; and final checking accomplished, the catapult was fired; the holdback connection released (leaving the holdback bar on the deck); and the aircraft was on its way.

The two different launch hookups coexisted for a time, since retrofit of the concept would have required extensive structural modification to the aircraft. Eventually, however, the last of the pendant/bridle-launched aircraft was retired.
Posted by Tailspin at 12:04 PM No comments:

Ramp strikes occur when a pilot gets too low on an approach to the carrier and hits the round-down at the aft end of the deck. Many end very badly unless it is just a hook slap. Rare now, they occurred more frequently before the advent of the angled deck as pilots were concerned about landing long on an axial deck and crashing into the barriers that protected the people and airplanes forward. The landing signal officer will call "power" if the approaching airplane begins to sink below the proper glide path. 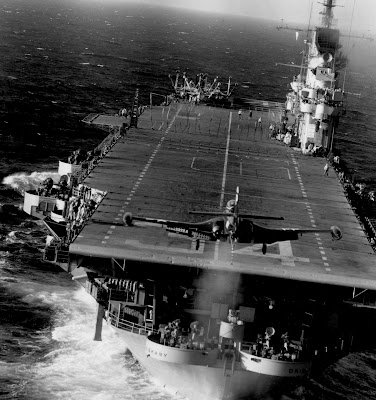 Several years ago, I spent a day and a night as a guest aboard the carrier Eisenhower off Norfolk while it was being used for carrier qualifications by F-18 Hornet pilots. Day landings were straight forward, with few bolters, fewer waveoffs, and an occasional desultory call by the Landing Signal Officer for "power". Night landings were entirely different. Frequent waveoffs and bolters, and often the call for "Power, Power!, POWER!!" After one of these, the LSO went so far as to call the pilot on his downwind and say, "When I say Power, you add Power. Don't second-guess me. Do it again and I'm sending you to the beach."
If you click on the picture*, you should be able to read the warning on the ramp... 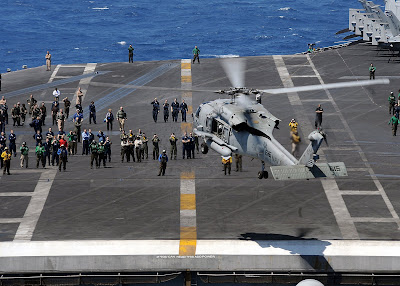 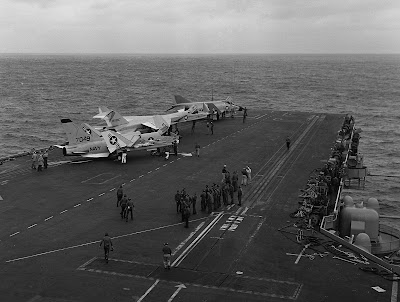 On 1 November 1960, give or take a day or two, Forrestal was being borrowed by NATC for additional carrier trials of new aircraft about to be delivered to the fleet: the Vought F8U-2, the North American A3J-1, and the McDonnell F4H-1. They have been positioned for a launch event on a gray day in the Atlantic. Each will be started and taxied back for launch from the starboard bow catapult. This route involves both turning out of and into the strong wind over deck that might be needed for launch, a check of braking and steering capability.

The requisite bridles/pendants to attach the airplanes to the catapult and holdback pendants to restrain them until the catapult has begun to stroke are piled along the starboard side of the deck. These predate the nose gear-mounted hardware that will be introduced with the next generation of carrier-based airplanes to simplify the process.

I believe that the photo was taken by Pete Bulban, an Aviation Week writer for many years. In any event, it was in his collection that was obtained by Jay Miller.
Posted by Tailspin at 1:16 PM No comments: 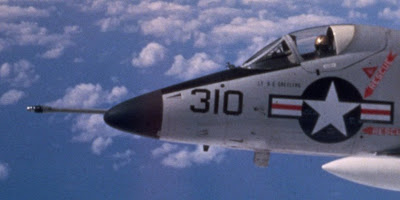 To provide a modicum of all-weather capability to the Skyhawk, Douglas added a small radar to the nose of the A4D-2N. This was to provide terrain clearance during a descent in instrument conditions to 1,000 feet above ground level, where the pilot was hopefully in visual flight conditions. (A simple autopilot was also added to reduce pilot workload when he was on instruments.) The attack still had to made visually as the radar provided no means for targeting. According to the service acceptance trials report, "It must be recognized that the capability is marginal and requires highly trained pilots thoroughly qualified in radar navigation techniques."

Note the anti-flash hood behind the pilots head that he would pull over the cockpit during the bugout after delivery of a nuclear weapon to reduce the risk of injury and damage from the thermal effects of the nuke's detonation.
Posted by Tailspin at 10:50 AM No comments:

Say Hello to My Little Friends 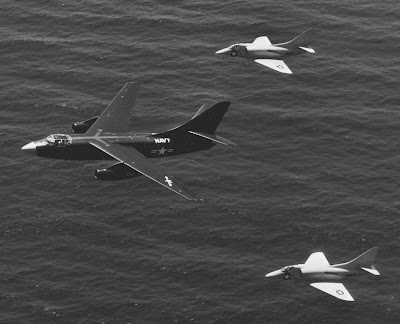 Between the Korean and Vietnam wars, one of the primary missions of the U.S. Navy attack carriers was the destruction of Chinese and Soviet military bases with nuclear weapons if the cold war became hot. In order to increase the number of nukes that could be delivered in the first wave, the A3D Skywarrior fleet was to be augmented by a squadron or two of diminutive A4D Skyhawks.

The Skyhawk was point designed to be as small as possible, so more could be accommodated on each carrier. One fallout of its minimum size and weight was the absence of a radar that would enable more accurate navigation at night or in poor visibility conditions.

A tactic to reduce the likelihood that the Skyhawk pilots would get lost en route was to have them fly on the wing of an A3D, which was not only equipped with radar but carried a crewman trained in the art of celestial navigation. The A3D crew would lead them to a visible landmark, at which point the A4D pilots would break off and all would continue independently to their assigned targets.

The capability was futher enhanced by the addition of aerial refueling equipment to the A3D as a tanker and the A4D as a receiver, thereby extending the Skyhawk's range. Nevertheless, its pilots still referred to their mission as one man, one bomb, one way.
Posted by Tailspin at 10:51 PM No comments: