The A-12 Avenger II Program: The End is Near

It's hard to believe that it has been more than two years since I last updated the status of the A-12 Avenger II program and its termination is still not yet complete from a financial standpoint. See http://thanlont.blogspot.com/2011/05/12-it-aint-over-until-its-over.html

For a prior post and links to four (!) more on the A-12 in this blog, see http://thanlont.blogspot.com/2011/01/gift-that-keeps-on-giving-final-chapter.html

The program was, of course, canceled back in 1991, but like Jarndyce v. Jarndyce in Dickens' Bleak House, it has lingered on as a lawyer's dream.

However, according to an online Aviation Week note dated 21 May 2013:

In a sign of movement in the epic legal battle over the A-12 Avenger II, the Obama administration is asking Congress to allow the Navy to accept a settlement in the case.

In a letter outlining amendments to the administration’s fiscal 2014 request for appropriations, the Pentagon is seeking legislation that would “authorize the Secretary of the Navy to accept and retain in-kind goods and services in lieu of monetary payment, for the purposes of a settlement of the A-12 aircraft litigation.”

More importantly for aviation history, the A-12 mockup has finally been moved to the Veterans Memorial Air Park in Fort Worth, Texas.

The Air Park is a nice little (and growing) aviation museum north of town and just south of Meacham Field with several aircraft on display outdoors. It's well worth a visit. See http://www.veteransmemorialairpark.com/home1.aspx

The full-scale mockup was displayed at an open house in 1996 at Carswell Air Force Base.

The mockup looks a lot better than I thought it would after more than two decades of storage, mostly outside, and hopefully the museum can refurbish it and provide a suitable venue for its display.
Posted by Tailspin at 12:52 PM 2 comments:

Dana Bell has teamed up with Classic Warships to produce a series of Aircraft Pictorials on U.S. Navy Airplanes. Three have been published so far, covering the SB2U, OS2U, and F4F. See http://www.classicwarships.com/aircraft_pictorial/aircraft_pictorial.html

These are affordable, well-researched, copiously illustrated monographs. The production quality is excellent. Dana has spent a lot of time on what I call an Easter egg hunt in the National Archives, among other places, and found pictures, drawings, and information previously unpublished and that sometimes contradicts or expands on what we know about a particular airplane type.

Dana is currently sifting through boxes and boxes of 1940s documentation on the F4U-1 Corsair. One of his discoveries is that the F4U-1A designation of what the Navy called the "raised cabin" Corsair was never officially assigned. (There are more revelations but those will have to wait until this next Aircraft Pictorial is published.)

His assertion has generated some debate. After looking at some of my stuff that dates back to 1943 and 1944, I agree with Dana that the Navy did not officially recognize the raised cabin F4U-1 with a designation change.

In the process, I got interested in the Navy's use of letter suffixes to aircraft designations. As a result, I'm pretty sure that the early (through say, 1942) and subsequent meanings have been inadvertently conflated in a confusing way.  For example, in explanations in books and on line, you'll find that the letter suffix A stands for many different changes. After examining several examples and in particular relying on an explanation in Introduction to Naval Aviation (NavAer-80R-19) published in January 1946, it appears to me that up through about 1942 there were very few letter suffixes that were related to specific applications or capabilities. (One was P for Photographic.) "A" simply meant the first "minor modification not sufficiently important to change the modification number or where the airplane has been diverted to another service or for a special purpose".

It took a while to find an example of a "B" for a second minor modification that substantiated my thesis, which was the Consolidated NY trainer. 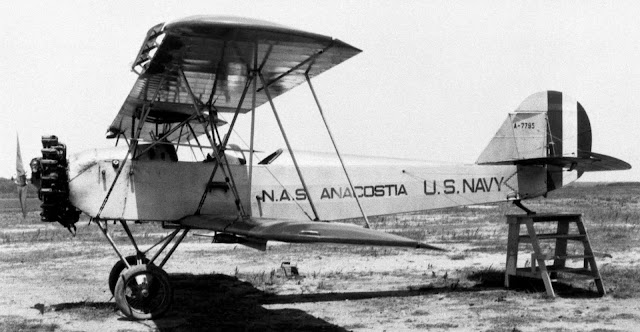 The above is an NY-2 modified with leading edge slats that was being evaluated by NACA in 1928. Consolidated Aircraft* won a 1925 Navy competition for a trainer that was then designated NY-1 (N for trainer, Y for Consolidated, no number between the type letter and the manufacturer letter because it was Consolidated's first trainer for the Navy). According to the interweb, the NY-1A was a modification for gunnery training with a machine gun mounted in the rear cockpit and the NY-1B was an NY-1 modified with the bigger wing and more powerful engine of the NY-2.

At some point early in World War II, however, the use of A appears to have acquired a specific connotation, possibly used only to differentiate a Navy airplane built for the Army, e.g. SB2C-1A. "B" similarly became associated with a Navy airplane that was to be provided to the British, as in F4F-4B. As a result, the first minor modification was now recognized with a "C" suffix and the second, with a "D". This led to the TBF-1C (wing guns and more fuel), the TBF-1D (ASB radar), SB2C-1C (cannon), F4U-1C (cannon), F4U-1D (multiple improvements), etc. Note that "C" did not, in this instance, stand for "cannon": it was a coincidence that the first minor change was to cannons. Thinking that D stood for droppable fuel tank in the case of the F4U-1D was even more fanciful; the F4U-1 had provisions for a droppable fuel tank.

Shortly after this philosophy change, however, mission-specific suffixes began to proliferate and the use of a generic suffix progression in alphabetic order beginning with C was abandoned.  One of the early additions was "N" for a "night" fighter (as an indication of the designation system development in progress at the time, the radar-equipped fighter version of the F4U-1 was designated F4U-2; the equivalent F6F-3 modification was the F6F-3N.) But I can't yet say whether a particular suffix used in the mid-1940s was the result of the alphabetical approach or the implementation of specific letters for particular mission capability modifications.  "C" was eventually used to designate a land-based airplane that had been adapted to be carrier capable but it's possible that the SNJ-3C was so designated because it was a first minor modification of this trainer. Similarly, "E" came to mean an electronic modification, but the TBF/M-1E might very well have simply been the third minor change of the Avenger.

Consistency in designations was not a Navy hallmark in any event. For example, the modification of the Douglas Devastator to add floats was designated TBD-1A. A similar evaluation of the Vought Vindicator was designated XSB2U-3...

Another divergence was the designation of successive variations of the North American PBJ, which for all intents and purposes was a US Army Air Forces B-25 Mitchell. Although the Navy did redesignate it as the first Patrol Bomber that they procured from North American (J), the suffix letter for major derivatives was consistent with the Army designations, e.g. the B-25H became the PBJ-1H.

*Consolidated Aircraft was merged with Vultee Aircraft in 1943 to become the  Consolidated Vultee Aircraft Corporation. After the war, the company adopted the brand name Convair. It subsequently was acquired by General Dynamics but as a named division. In 1994, GD eventually sold that portion of the division still based in San Diego to McDonnell Douglas Aircraft and the remainder that had been developing and building airplanes in Fort Worth, Texas to Lockheed.

I've written a couple of posts on the F8U-3 and a monograph for Steve Ginter. 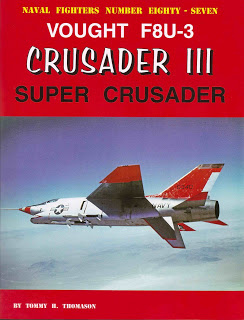 The monograph is pretty good, if I do say so myself, but if in doubt you can read reviews of it on Amazon http://www.amazon.com/dp/0984611401 and then order it if it appeals

Whether or not you have the monograph, this is a pretty good Vought sales pitch for the airplane, emphasizing the fact that a radar operator wasn't necessary for the successful interception of an attack: http://www.texasarchive.org/library/index.php/F8U-3_Weapons_System

Unfortunately, the admirals didn't agree, opting for the two-seat F4H instead...
Posted by Tailspin at 2:32 PM No comments: