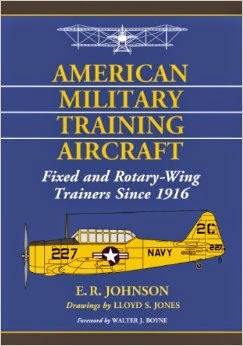 This latest book from E.R. Johnson, published by McFarland, is a comprehensive encyclopedia for aviation enthusiasts of U.S. military trainers, including gliders and helicopters. While perusing its 480 pages, you’re pretty much assured of coming across more than one aircraft of which you were previously unaware. In the event that you hear or read about a trainer with which you are unfamiliar, you’re almost certain to find a summary description of its career—however short or even non-existent—along with a data table, at least one photograph, and a multi-view drawing (by Lloyd S. Jones) of the type in this book

Like Military Transport Aircraft and United States Naval Aviation, it is soft cover and there are no color pictures. It does include an appendix describing the U.S. military trainer designation systems, which changed over time. There is also a very useful glossary and a comprehensive index, which will be invaluable in a search for a particular type covered by the book.

Try as we authors might, it’s virtually impossible to have a book published without error or typo, particularly one of this extraordinary breadth. For example, I only recently realized that the T (for trainer) designation of the Grumman TF (C-1A) Trader was based on its original justification in large part as a trainer rather than being “anomalous” as Johnson reports. See http://thanlont.blogspot.com/2012/06/designation-story-redux.html. Jones’ drawing labeled as the T-37A has tip tanks that were only present on the T-37C (procured by foreign governments but not the USAF) and the A-37A and B Dragonflies, which were not trainers, per se. Hopefully these slips are few and far between. I believe that they do not detract from the overall usefulness of the book. (I was particularly pleased to note that Johnson avoided a common error by not ascribing dual controls to the Douglas A3D-2T (TA-3B).)

McFarland's website to order books is www.mcfarlandpub.com; the order line is 800-253-2187. American Military Trainers is also available from Amazon both in hardcopy and as an ebook (see www.mcfarlandpub.com/customers/ebooks for other providers).
Posted by Tailspin at 1:31 PM No comments:

All U.S. Navy carrier-based airplanes being developed at the beginning of World War II had folding wings and there was only one exception thereafter, the A4D Skyhawk; its span was specifically limited to the maximum dimension generally acceptable for a folded airplane. See http://thanlont.blogspot.com/2012/12/fitting-in-iv.html

There were, however, airplanes with specific limitations or issues that meant they weren't always folded at all times on deck. For example, the McDonnell F2H-2 (and reportedly the -3 and -4) Banshee's wings could not be folded or unfolded with full tip tanks. As a result, they had to be spotted with the wings unfolded for fueling before flight if the tip tanks were to be filled.

In order to minimize weight, the North American AJ Savage's wings and vertical fin could only be folded after the deck crew bolted a hinge to the fold joints along with a folding device, hydraulic for the wings and manual for the vertical fin. As a result, they weren't often folded. 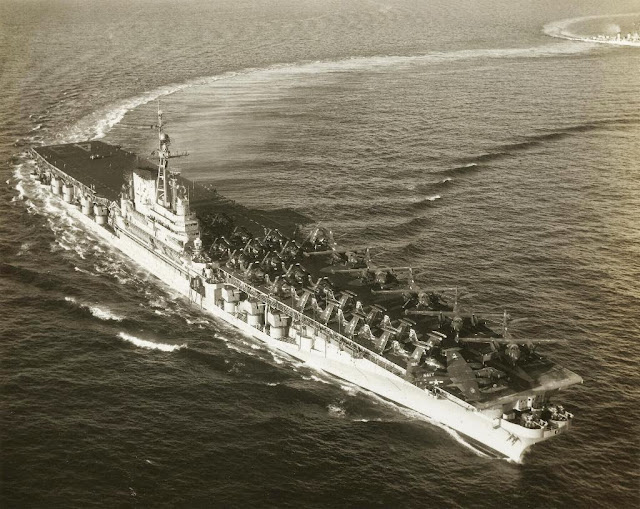 Although the Douglas AD Skyraider's wings could be loaded with bombs and rockets when folded, it was sometimes more convenient to arm one with the wings spread. 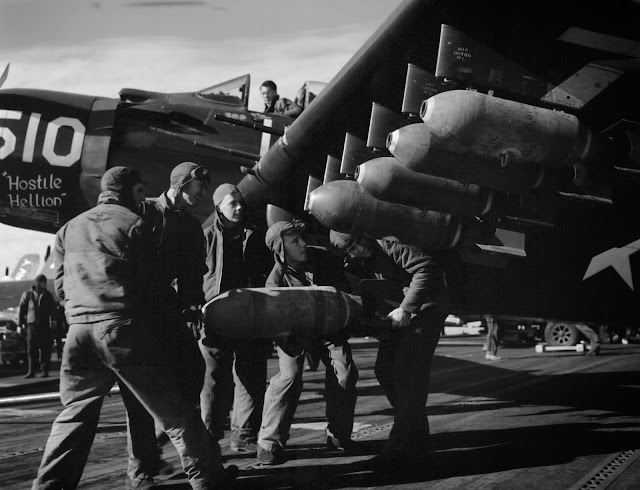 Carrier Landings: Visibility Over the Nose

One of the differences between a land-based airplane and a carrier-based one is the need for over-the-nose visibility down and to the left. In the beginning, it was to be able to see the Landing Signal Officer (LSO) on the approach until the cut or wave off. 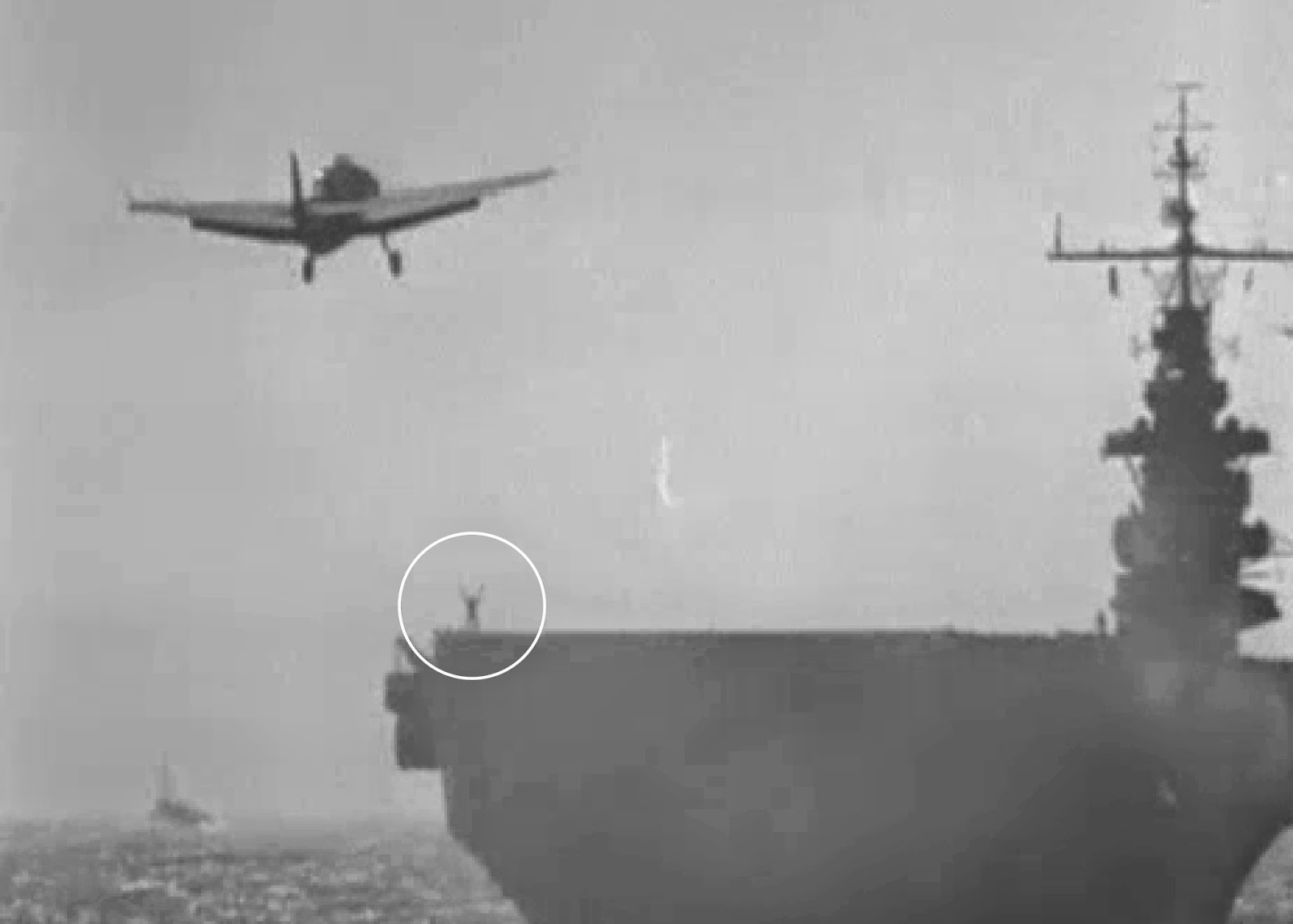 Here, the LSO is either signaling high or wave off (for the signals, see http://thanlont.blogspot.com/2012/11/waving-them-aboard-lso.html

There was a more relaxed approach to the requirement when airplanes were pulled by propellers. Douglas stuck an antenna mast squarely in the pilot's line of sight to the LSO on the SBD. 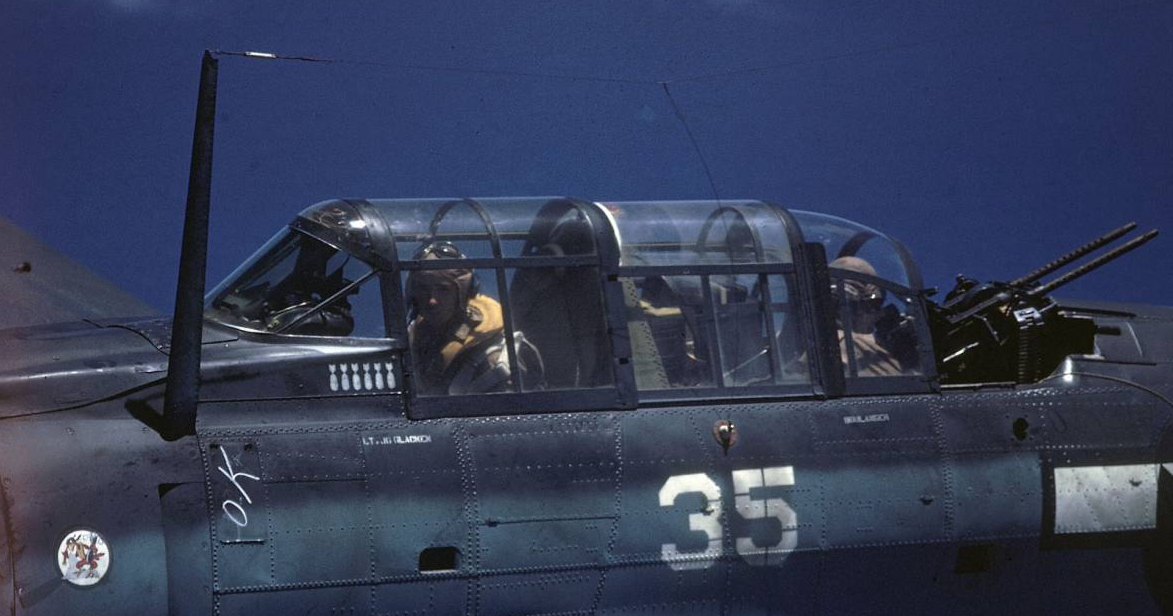 When Vought moved the F4U Corsair's cockpit back in the production redesign, the loss of visibility was significant. 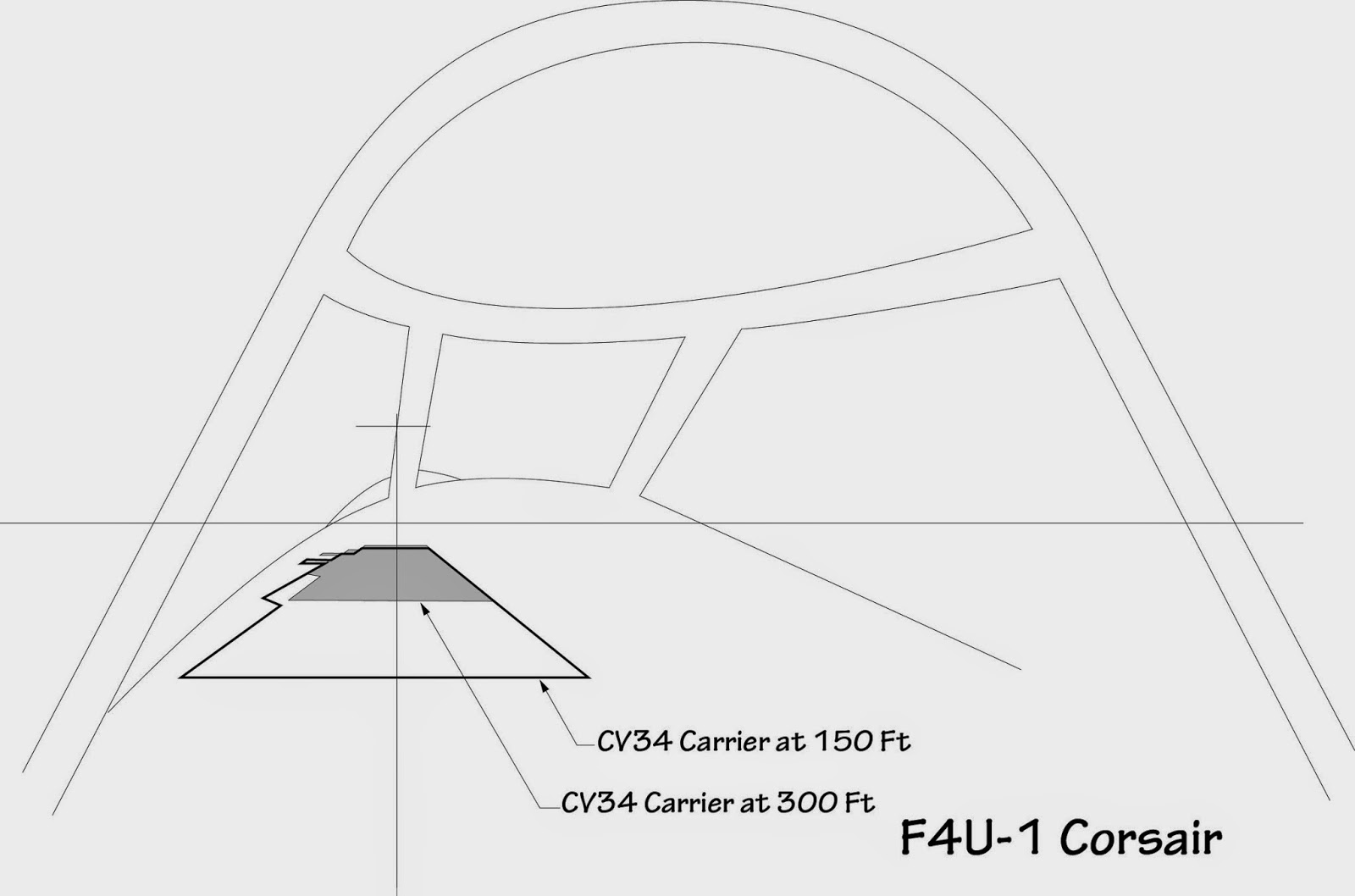 Pilots, however, coped by approaching the carrier in a turn, only straightening out when the LSO would stay in view. 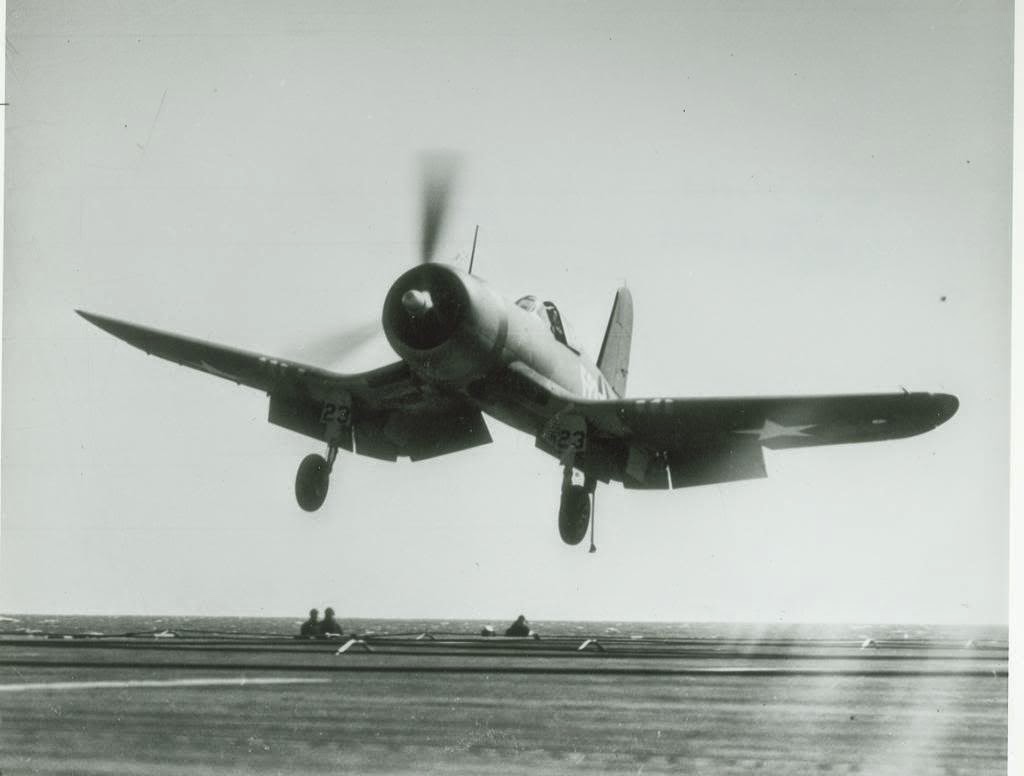 Jets approached somewhat faster than propeller-driven fighters so a visibility requirement was instituted. It failed to take into account the extreme nose-high attitude required at slow speed by the F7U Cutlass, since it could not have flaps. 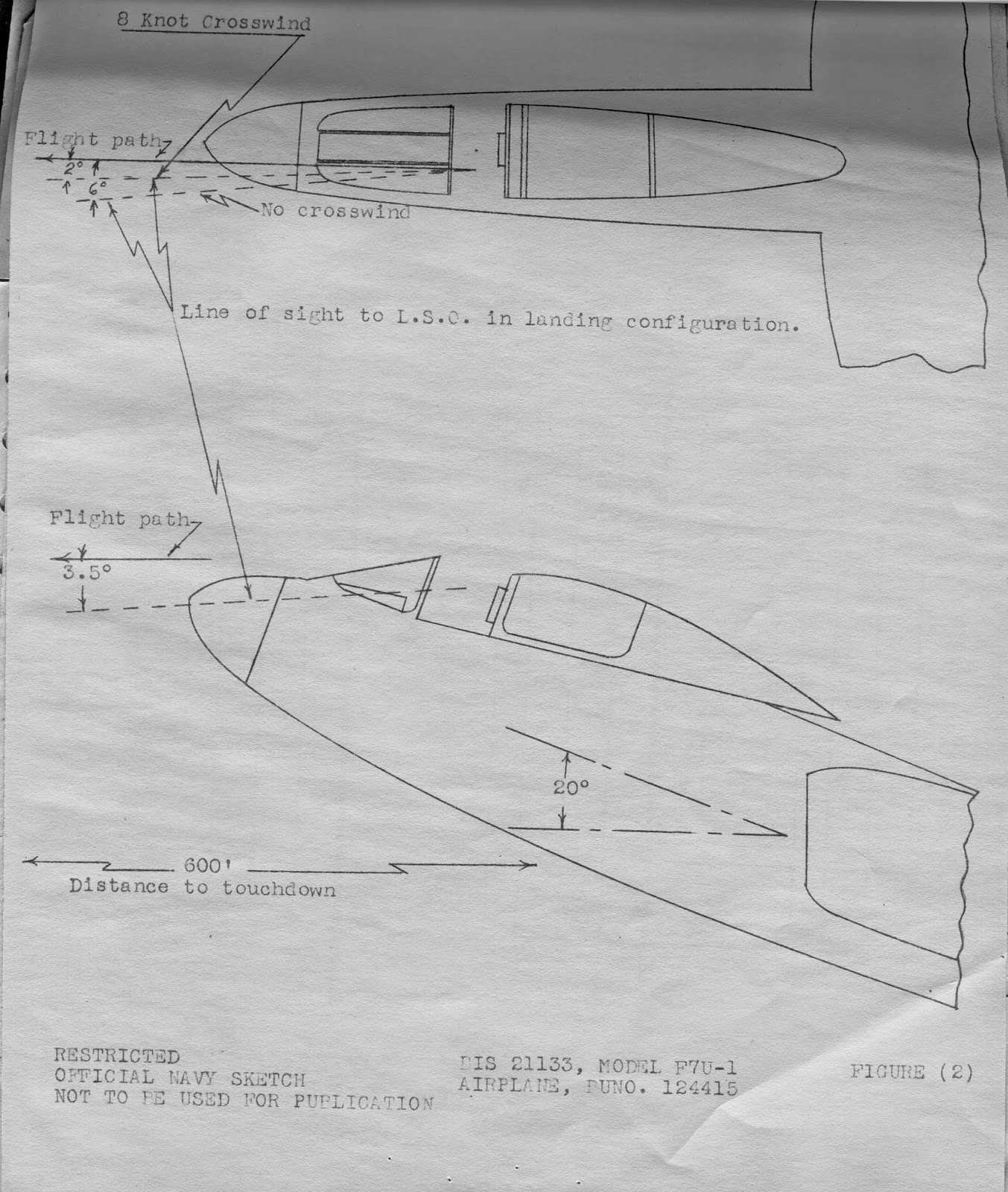 The lack of visibility was recognized early on. 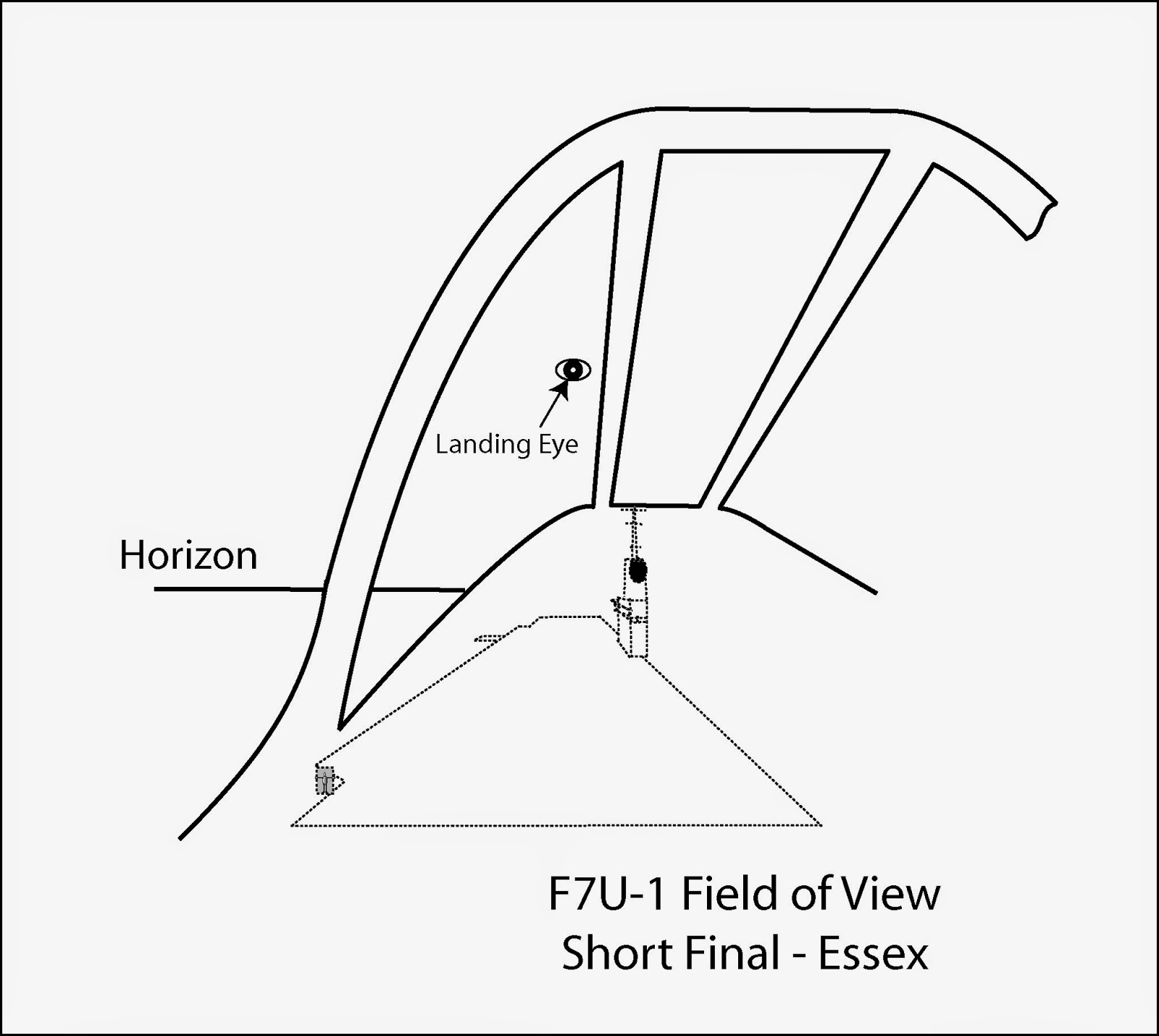 Nevertheless, the Navy proceeded with at-sea trials, which were accomplished by using a side slip on a straight approach. (The LSO is signaling high.)

As a result of the experience, a redesign of the F7U's cockpit and forward fuselage was required.

The first version was also deemed to be unacceptable, requiring another redesign of the cockpit, canopy, and radome before at-sea trials. 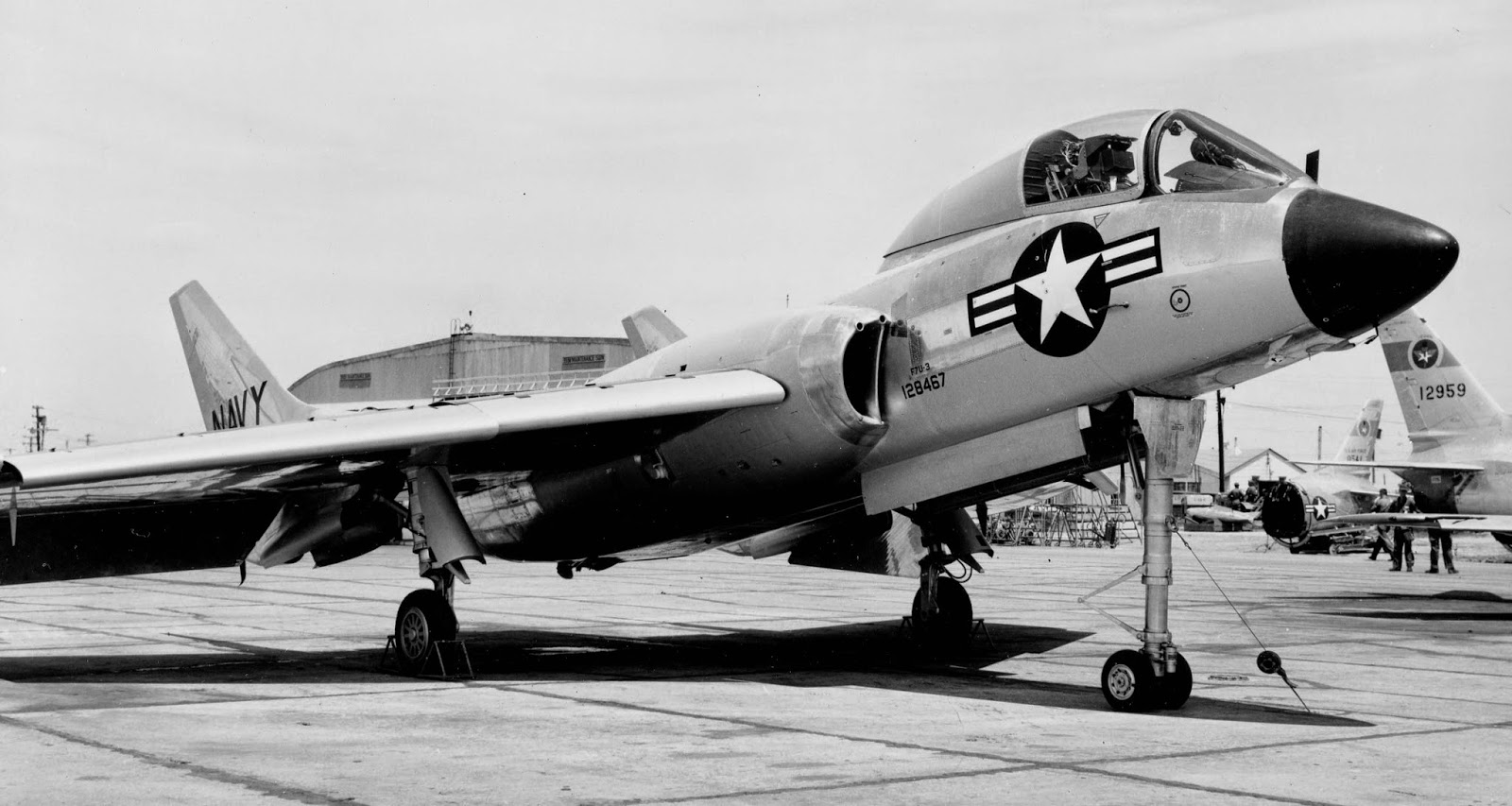 Douglas almost made the same mistake with its F4D but recognized it before beginning detail design. A quick and dirty modification of the mockup was evaluated.

When the Navy was forced by the delays in its fighter development programs to adapt the Air Force's F-86 to the carrier-based FJ-2 Fury, BuAer stipulated "that the angle of the approach sight line with the airplane in the static attitude not be less than 17 degrees below the horizontal with the seat in the full-up position." This required a redesign of the windscreen. 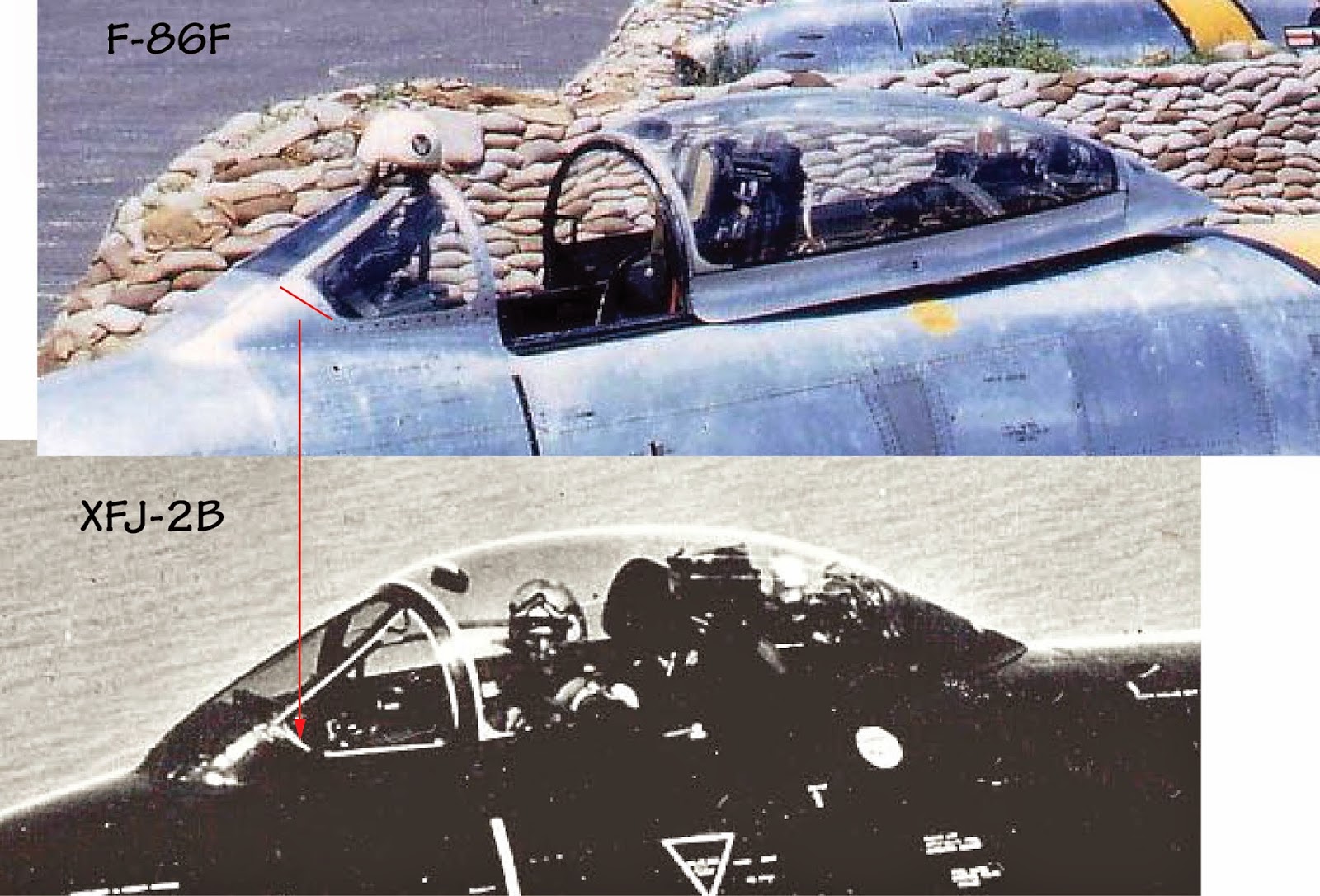 This change proved to be inadequate during the at-sea trials. 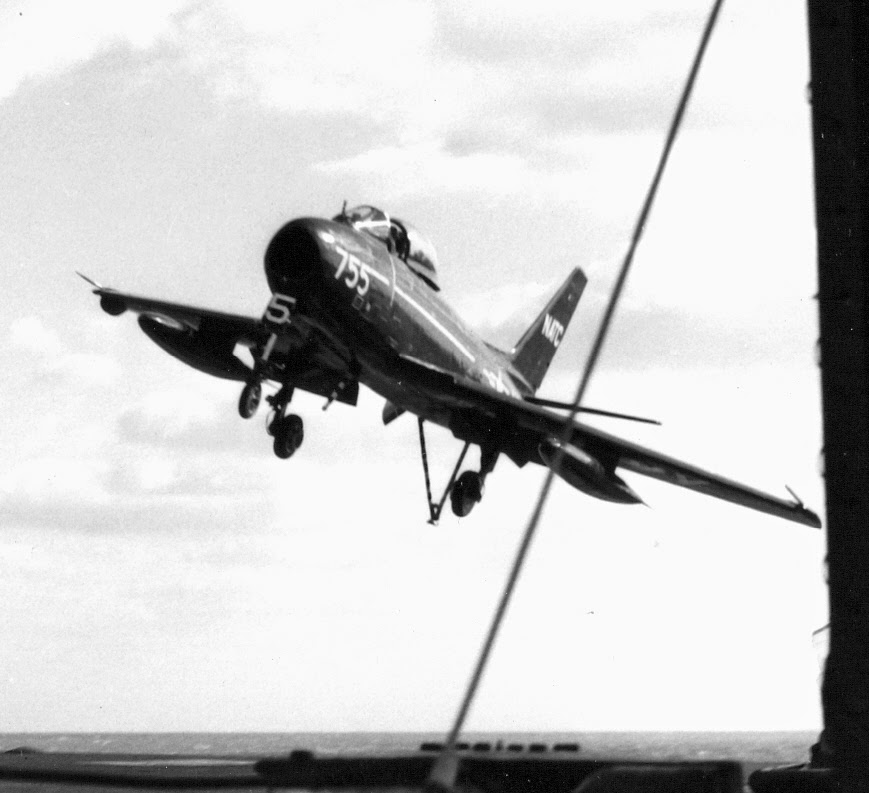 As a result, the windscreen was redesigned for production. 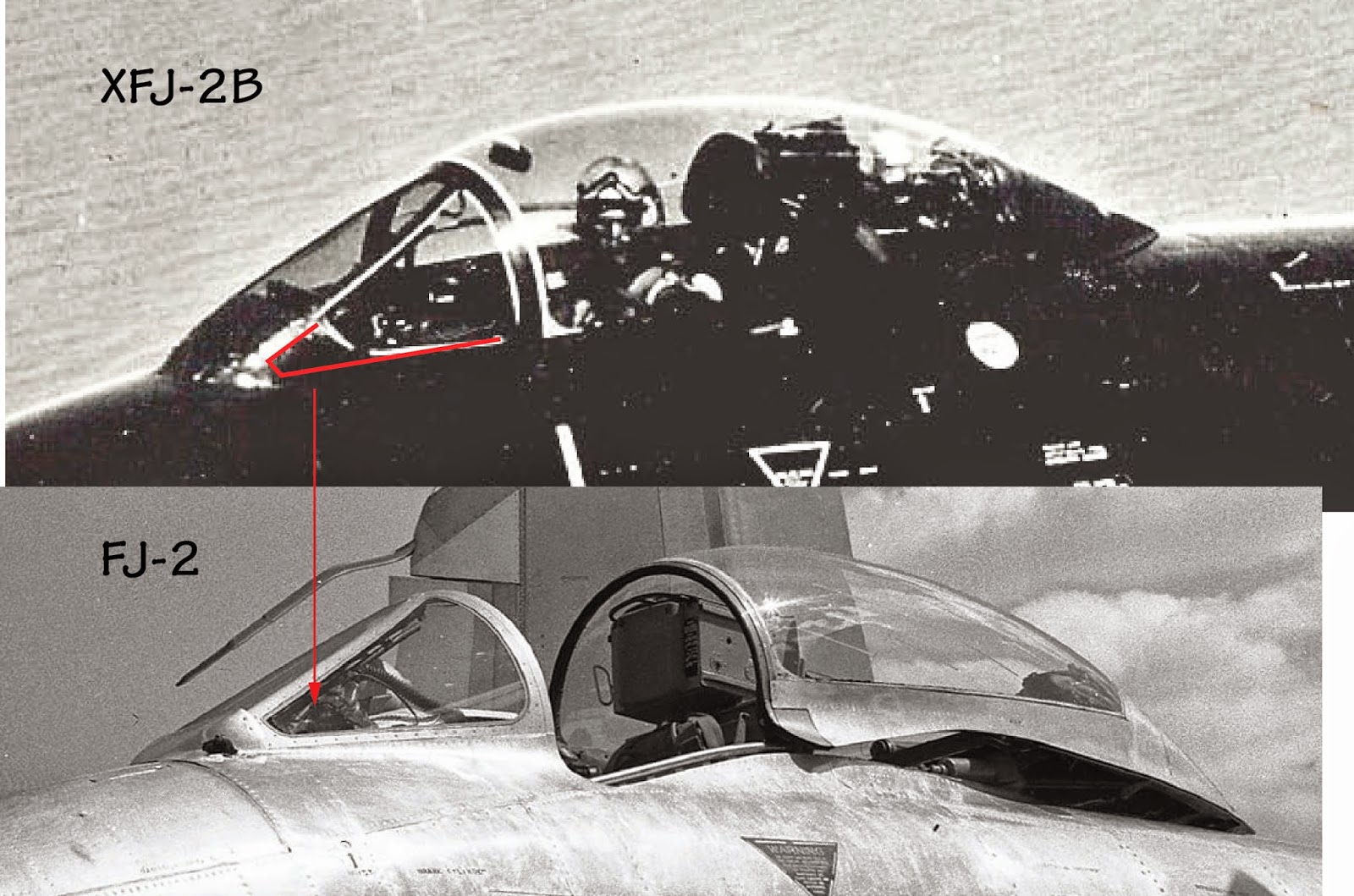 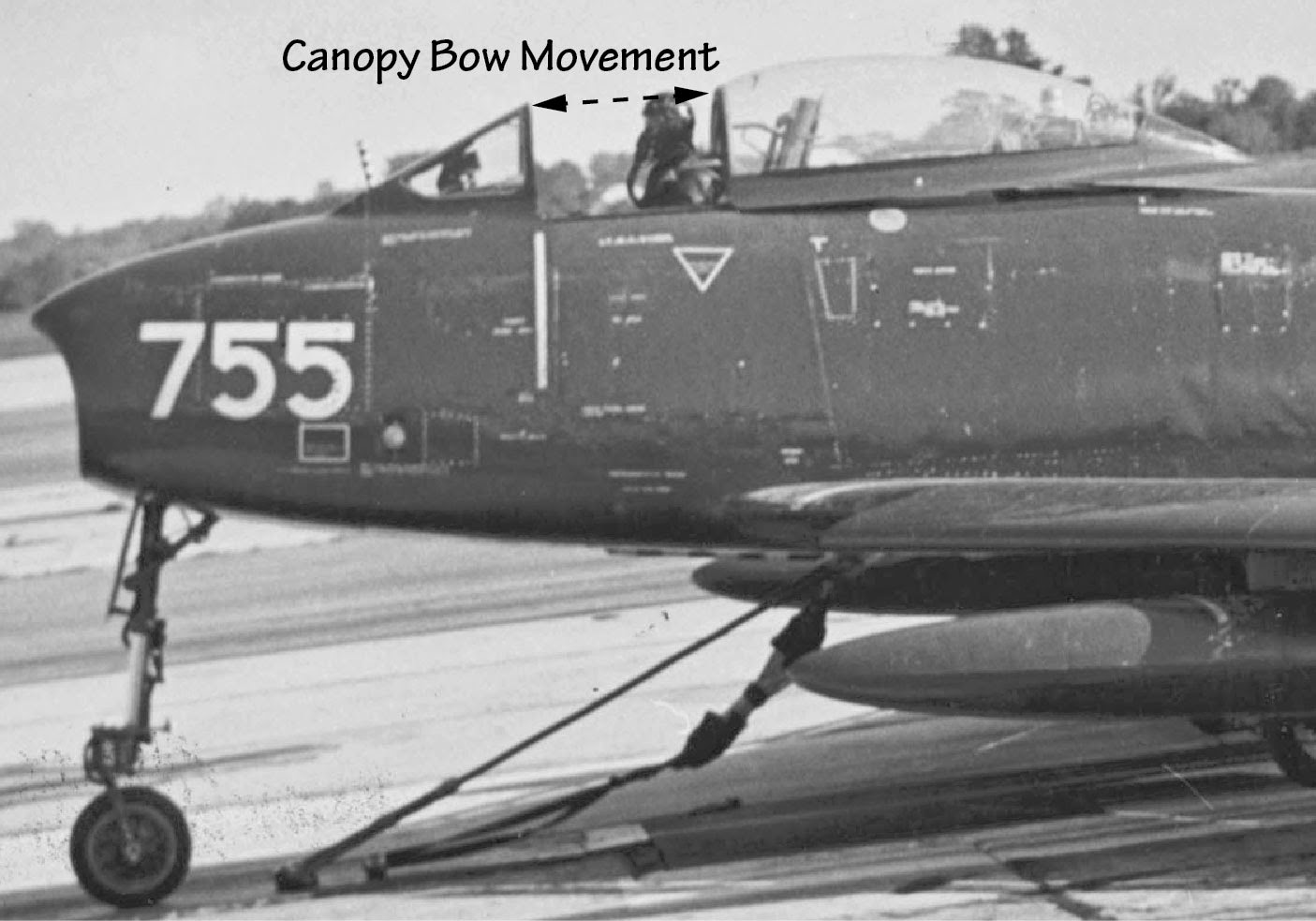 For production, the first two feet of the canopy movement was angled upward, providing for a higher seat position that did not require the pilot to duck his head when the canopy opened and closed.

This change further improved over-the-nose visibility and was continued forward to the FJ-3.

Perhaps the ultimate in over-the-nose visibility in a carrier-based fighter was achieved by McDonnell with its F3H Demon. 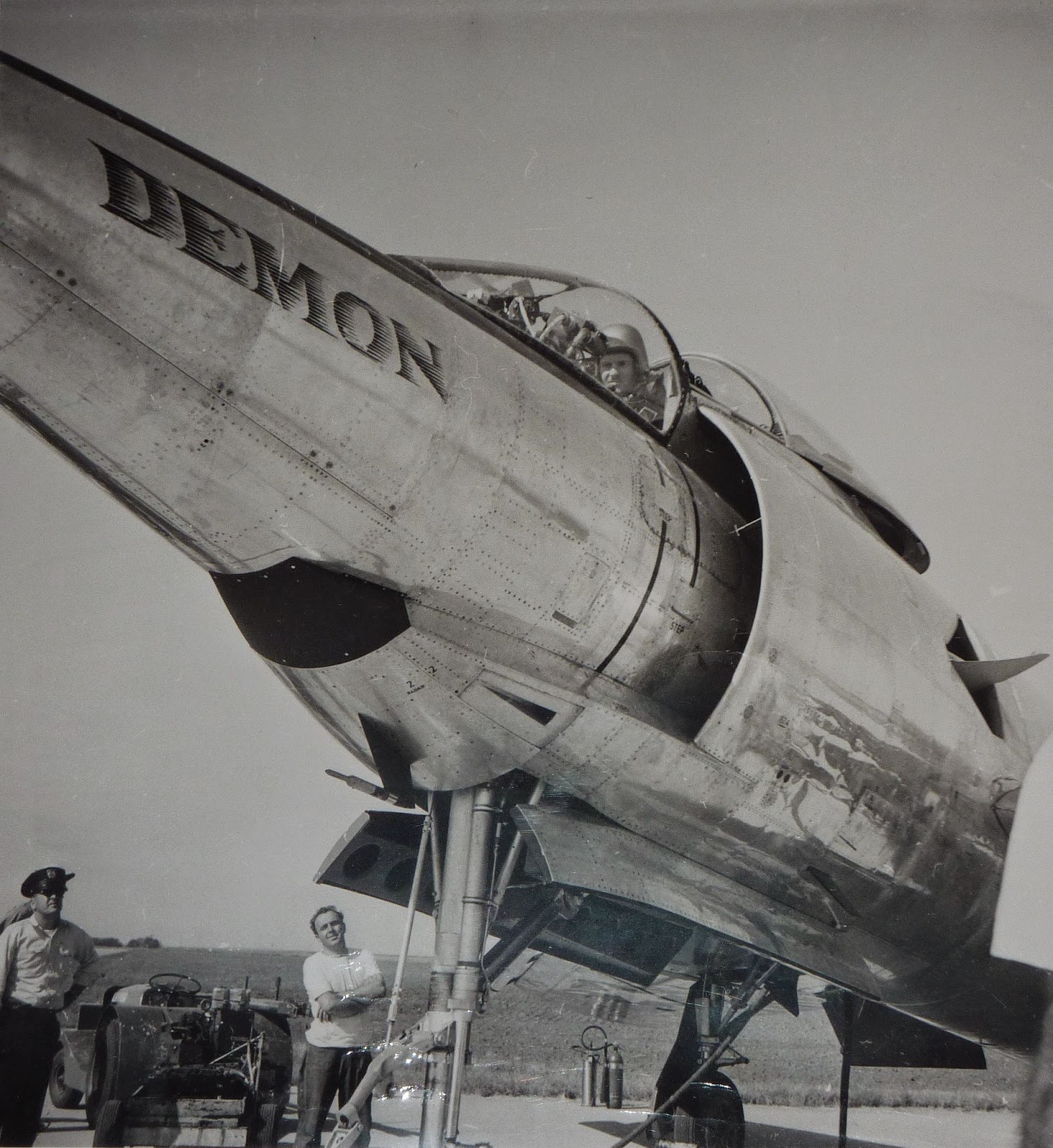 Posted by Tailspin at 8:07 AM No comments: