It takes all the running you can do to stay in place... 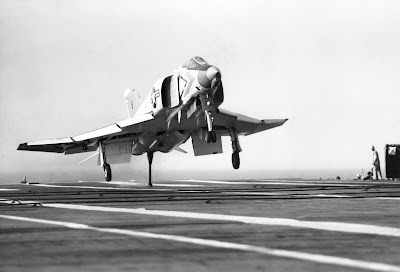 Early in the F4H Phantom design, it was determined that more lift was needed to achieve the approach air speed required. The solution was the addition of an inboard leading edge flap and boundary layer control over the other leading edge flaps and the trailing edge flaps. This required postponing carrier trials from the 4th airplane to the 6th, since low rate production was already under way by the time the redesign was released. 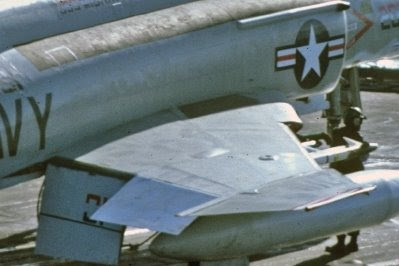 Even more lift was required by the time the F-4J was ordered, which was accomplished by drooping the ailerons along with the flaps. The resulting increase in nose-down pitching moment proved too great for the existing stabilator. Locking up the inboard leading edge flap to increase stabilator effectiveness might have been enough but it was decided to also add a fixed slat to the leading edge of the elevator. The package of changes was made to F-4Bs then in production and retrofitted to surviving Bs.
Posted by Tailspin at 1:38 PM No comments: 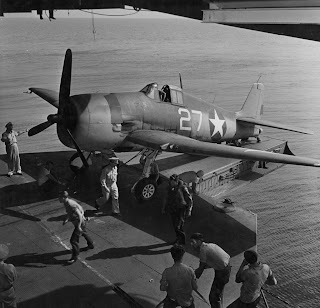 In 1928, catapults on the flight deck were considered obstructions by some but hangar deck catapults were of interest. Aircraft could be launched during recoveries and more aircraft could be launched during a shorter period of time. In order to maintain maximum freeboard at the bow and keep water out of the hangar deck, the launch had to be made sideways. or athwartships. One such catapult was installed on Yorktown. To provide enough length for the launch, the airplane was positioned on a outrigger on one side of the ship. like the early production Hellcat shown above, and then catapulted through the hangar deck and out the other side of the ship as shown here. 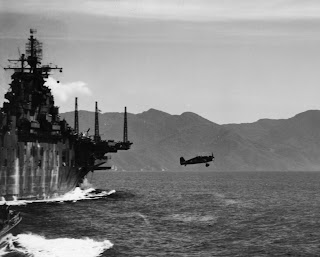 This concept and the installation of arresting gear forward for landings from the bow aft as well as from the stern forward were operationally evaluated and then removed as not being as worthwhile in practice as they had seemed in theory...
Posted by Tailspin at 4:39 PM 1 comment:

Most Accurate Aviation Movie Ever?

Faint praise perhaps, but The Bridges at Toko-Ri has to be in the top three. It was based on a slim novel by James Michener, who was embedded on aircraft carriers in action early in the Korean War.

The only major license taken in the book and repeated in the movie was the use of glamorous jets (Banshees in the book and Panthers in the movie) to drop the bridges. They and their puny bomb/rocket loads would have been used for anti-aircraft defense suppression instead, with Skyraiders doing the heavy lifting. Oh, and the F9F-5P shown here is an F9F-5 with a camera window painted on it - the real F9F-5P nose was 12 inches longer and didn't have four 20mm cannon sticking out the front of it.

Another is a very minor marking error on the actual F9F Panther used in the final scenes. The aircraft number is 209 but the number on the vertical fin is 4. It should be 9. (I checked the airborne footage before the crash landing; it doesn't appear that any number is on the fin of the aircraft being filmed.) 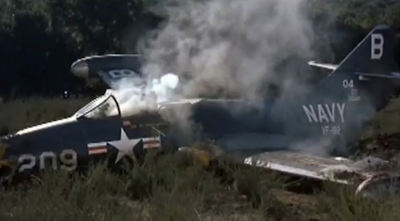 However, in this scene of CAG's crash in 21PP, they've taken the trouble to include Davis barrier straps being dragged as shown in the real barrier engagement of 109D shown above in black and white. In exterior closeups of the cockpits during the landing approach, the barrier engagement post in front of the canopy is extended. Compare it to the following picture, which is of an actual incident (the pilot caught one of the last wires and the barrier operator chose not to lower it). 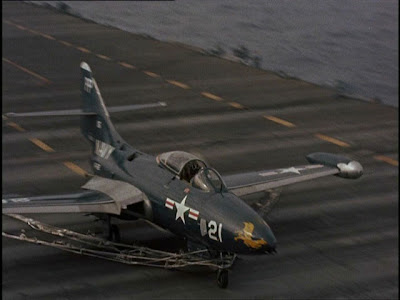 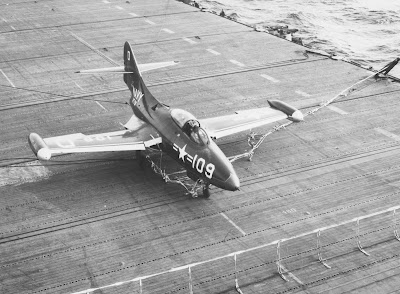 It would appear that all of the scenes with airplanes were shot specifically for the movie, with no stock footage of the GB crash or other foolishness. It isn't immediately obvious that the scenes done with models weren't the real thing and they were good enough to win the 1955 Academy Award for Best Special Effects - no CGI back then. And I'm sure that most fighter pilots' wives look like Grace Kelly.

If you haven't seen it or seen it in a while and have any interest in carrier-based Naval aviation history, I suggest that you go buy the DVD from Amazon. Only $10. For men of a certain age, like me, it's also a great movie.
Posted by Tailspin at 9:20 AM 2 comments: 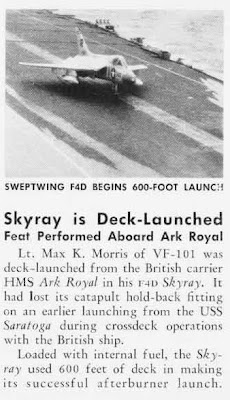 That is, if they are flying a fighter with a low wing-loading and a high thrust to weight like the F4D Skyray and they want to go back to home plate...

From the January 1958 issue of Naval Aviation News. The incident occurred in October 1957 during Operation Strikeback in the North Atlantic, with the takeoff on 13 October.
Posted by Tailspin at 7:06 PM No comments: