Strike from the Sea Errata

Sometimes—in spite of my best efforts and those of the editor and layout artists—something goes clang instead of click. In this case, it was a picture on the upper right side of page 207. The original one was deemed to have too low a resolution so I came up with a Plan B, while lobbying for the original, since it tied in with the F-35 cockpit pictures on this and the facing page. As luck would have it, the original picture was used, but with the Plan B caption. Herewith the picture of Ensign Robert Bennett that goes with that caption. 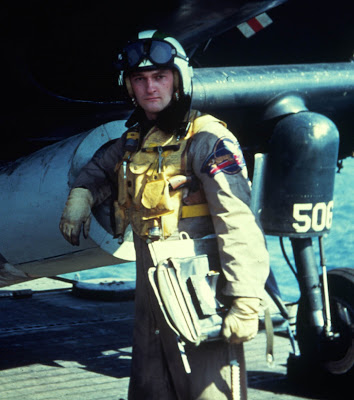 The caption that goes with the picture in the book is:

This AD Skyraider pilot’s attire, modeled by Ens. John Higgins in 1951, was typical for the Korean War. Except for the protective shell over his cloth helmet and the exposure suit necessary for survival in the frigid sea off Korea, the wardrobe wasn’t far removed from that of World War II.

My apologies to both John Higgins and Robert Bennett.
Posted by Tailspin at 3:08 PM No comments:

The Other Aircraft Carrier 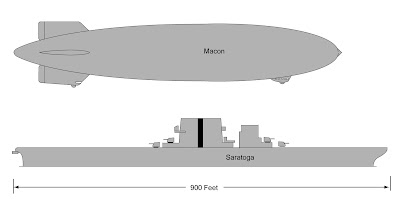 The Akron and Macon were huge dirigibles flown by the Navy in the early 1930s to evaluate their utility for very-long-range reconnaissance over the ocean. Each incorporated a hangar and operated a small contingent of tiny Curtiss F9C Sparrowhawk fighters, primarily to increase the scouting capability but also for self-defense. The fighters were launched and recovered from a trapeze that lowered from the hangar bay. The capability was evaluated in fleet exercises with mixed reviews. Unfortunately, the airships proved vulnerable to stormy weather conditions and both crashed, the Akron in the Atlantic off Barnegat Inlet, New Jersey in 1933 and the Macon off Point Sur, California into Monterey Bay in 1935. Although the Navy continued to operate lighter-than-air aircraft through the early 1960s, none were this large, much less capable of carrying airplanes. 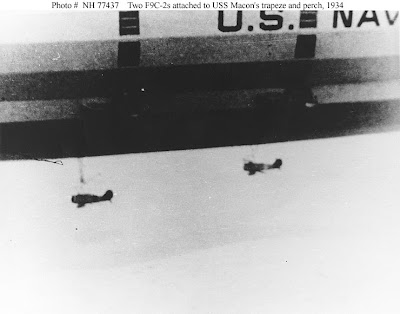 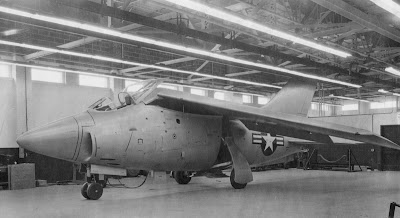 At one point during Grumman's long and ultimately futile first attempt to provide the Navy with a swept-wing jet fighter, its XF10F Jaguar sported a two-position variable-incidence wing. When this mockup was constructed, the design also featured a low(ish) horizontal tail. The final configuration was the equally radical variable-sweep wing, combined with an attempt at creating a horizontal tail control system that eliminated the need for a hydraulic actuator. Ironically, it was the latter and not the former that proved almost as troublesome as the J40 engine. Grumman did a design study substituting the J57 but by then both the Navy and Grumman wanted to move on. However, if 1) Grumman had stuck with the variable-incidence wing and what was to become the preferred location of the stabilizer in supersonic flight and 2) the J57 had become available to replace the wretched J40, the Jaguar still wouldn't have been as fast as the Crusader because the basic airframe shape was the antithesis of area rule...
Posted by Tailspin at 7:42 PM 2 comments:

At some point, the compactness of a folded carrier-based airplane became determined by the number that could be "spotted" on the Essex-class hangar deck and flight deck, while leaving enough space on the latter for landing one more airplane. This number was determined by placing templates on a detailed top view of the hangar and flight decks, maintaining a minimum of one-foot clearance between adjoining aircraft and between an aircraft and ship structure. Another ground rule was that each aircraft had to be readily towable out of the spot onto one of the elevators (note the forward one) without undue jockeying. The position of the wheels was marked on the templates, because airplanes on the flight deck were allowed to be parked with noses, wings, and tails extending out over the sea.

The hangar was clearly the more complicated of the two decks to spot because of all the extraneous structure there, including the two portals between the three hangar bays. The maximum folded span (for all but the A3D Skywarrior ) was 27' 6", apparently because in the narrowest sections of the hangar, this was the maximum span that would allow two aircraft to be parked side-by-side if that was necessary to maximize the number that could be accommodated. (As I subsequently discovered, the limit established by the hangar was 25' 4"; the 27' 6" appears to have been set by the SCB 27A elevator. See Fitting In III, July 14 2010.

The example above* is an operational spot of the Hancock, as opposed to a spotting factor exercise. The aircraft shown are the A4D Skyhawk, AD Skyraider (including a representation of the propeller), F11F Tiger, and F4D Skyray.