My latest book, Scooter!, has yet to get many reviews on line or in periodicals (actually only one so far, from an on-line friend) but what I really appreciate are the complimentary and congratulatory emails from individuals, particularly those who bring something more to the story.

For example, Larry Blumenthal provided the following, scanned from FDR's 1960 cruise book picture of tied-down A4D-2s with protective covers in place, including specially created GSE for the Tinkertoy: 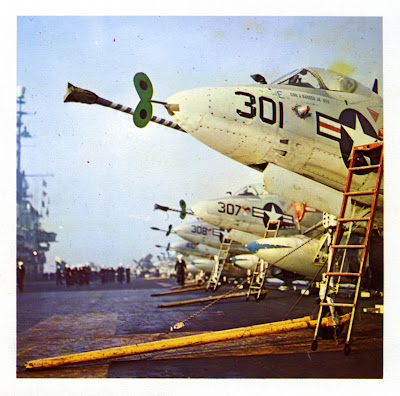 T.J. (Jeff) Brown provided a summary assessment of the A-4 versus the A-7 for the book, but he had more to add:
There is one thing that I forgot to mention in my submission that you might include, should you ever do a reprint. The A-4F nose struts that included the nosewheel steering (NWS) feature did not hold up well under the punishment of repeated carrier landings and leaked hydraulic fluid profusely. When a strut failed, there was no indication to the pilot except his repeated pushes on the stick button were doing nothing, and this detraction with his head down in the cockpit sometimes caused late brake applications when exiting the arresting gear. This caused great concern to all who might be in charge of flight operations, namely the Air Boss and the Skipper, especially if foul-deck waveoffs resulted. The nosewheel steering was also not accurate enough to keep from sliding off the side of the "turtle back" on the catapult (that held the bridle) that the airplane had to go up and over, either, and this operation had to be done with a Blue Shirt on the deck with a nosewheel tiller bar. This was dangerous for the Blue Shirt if the a/c had an operative nosewheel steering, since if it were engaged with the tiller bar connected, it could cause anything from broken bones to his being tossed over the side. For these reasons, most A-4F squadrons (as we did in Air Wing 21) replaced the Foxtrot nose struts with Echo struts. Problem solved, and we operated as had A-4 units since time immemorial: take the trap at 100%; on the pullback, simultaneously pull the power to idle, retract the speedbrakes, raise the flaps and hit the left brake, causing the aircraft to cock to the right since it was being pulled aft by the arresting cable; then smartly taxi out of the gear, pleasing all hands.

In the Training Command, it would not have been practical to do this with the T-birds, since carrier landings were few and some of the students needed all the help they could get anyway. Instead, the LSOs just put the Fear of God into them NOT to touch the NWS while on the ship and the tiller bar was connected (hand signal: index finger placed alongside the nose, and clearly acknowledged by the pilot).

Us Old Salts endured the inconvenience of not having NWS on the beach, since it would be a major job for Maintenance to change the struts all out and back on a short turnaround, which we usually had. All this taken into account, the A-7 always had NWS, since there was no turtle-back on the nose-tow cat system, and the NWS was much more accurate and easy to steer onto the nose-tow box. This is my story and I'm stickin' to it! :-)

Jack Anderson provided more color as well from his experience:
Reading (Scooter!) brought back a lot of memories that had been dormant about flying the the first A4D-1's. We were so pleased with them after flying F7U-3s that we just enjoyed the simplicity, reliability and the performance of them. I had forgotten about the engine problems and the mandatory safety inspections. One of those occurred while we were at sea doing our first carquals.
In a clean configuration we could exceed Mach one in a 30-degree dive. It performed well up to 35,000 ft. As it passed through 40,000 ft it was getting very sensitive. I once nursed one to 49,500 ft but it took a lot of work and required a step climb from about 43,000 ft. One my squadron mates said he made it to 50,000 ft by doing the same technique. We could out dogfight anything at Cecil Field except the F8U-1. The roll rate was spectacular and the throttle response was very good. The aerodynamic slats could flip you upside down in a high-altitude dogfight especially above 40,000 ft if you pulled too hard in the turn. I don't remember too much trouble with fuel shift in the wings on the dash 1, probably because of our nuke delivery mission and the requirement for a lot of low level nav practice.


Walt Fink, another contributor to Scooter!, and a long-time acquaintance, had his memory jogged as well:
The photo of the EPI on page 63 brought back a couple memories. The little windows for fuel pressure and oil pressure were flip-flop things with two readings (when powered), NORM and OUT, or something like that. We discovered, after a couple of unnecessary aborts by some of our more senior aviators, that the oil pressure flip-flop would show OUT when in reality the oil pressure was high. Apparently the circuitry inside it just recognized the normal range and anything above or below it defaulted to OUT. Since the J-65 was built around an oil leak anyhow, that did result in a couple moments of panic and high pucker factor.
That little quirk caused the Navy to retrofit the airplanes with what we called a "nickel gauge" for direct oil pressure reading. So-called because it was the tiniest little gauge in the airplane, only about the size of a nickel.

Jim Rotramel, my go-to guy for external stores and F-111 stuff, took the time to go through the book and provide corrections and additions to the captions for pictures that I hadn't shown him before going to press:
Pg 130: Mk 81/Mk 14 Snake Eyes, not Mk 82s. The Scooter was so small that Mk 82s looked enormous on it. The key thing to look for was that you couldn't carry a fully loaded MER/TER of Mk 82s, while you could with Mk 81s.

Pablo Calcaterra sent me this picture of an Argentine pilot attacking HMS Glasgow on 12 May 1982. The picture was taken from the deck of HMS Brilliant and is indicative of the height of the A-4 on the run-in: 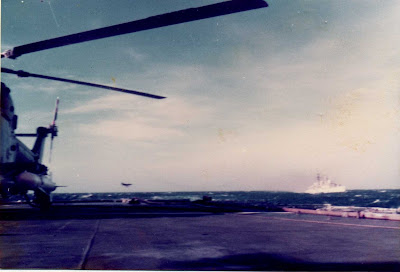 A better reproduction of Captain Carballo's and Lt Rinke's attack on Broadsword on 25 May and a painting by Carlos A. Garcia are provided here: http://thanlont.blogspot.com/2011/09/scooter.html
Posted by Tailspin at 1:00 PM No comments: