Much of this post was taken from Naval Fighter Number Eighty: Grumman F8F Bearcat, an excellent monograph on the Navy's last and arguably best propeller-driven fighter from the standpoint of air superiority.* 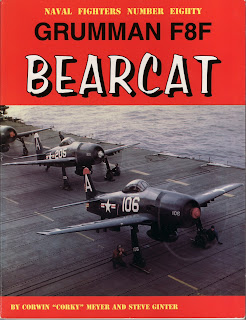 In 1943, Grumman engineering was struggling to meet the weight goal for their new high-performance air-superiority fighter that was intended to replace the F6F Hellcat. In the process, they came up with a gimmick that would have been expected from their across-the-Sound rivals, Vought, but not from what was fondly referred to as the Grumman Iron Works.

The primary structural design requirement is specified as a limit load in gs at a design gross weight.  For fighters, the design gross weight was approximately the same as the combat weight, which was the operating weight (empty weight plus trapped fuel/oil, fixed armament, pilot, removable equipment, and other odds and ends) plus bullets and 60% of internal fuel. Application of the limit load was not to result in a permanent deformation of the structure. There was also an ultimate load requirement, which was expressed as a percentage of limit load, below which the structure might be permanently bent but would not break. If it was subjected to something greater than ultimate load the designer was no longer responsible for what happened.

At the time, according to Corky Meyer,  a longtime Grumman test pilot and one of the coauthors of the monograph, the limit load requirement was 7.5 gs and the ultimate load almost twice that, 13 gs. To minimize weight, the Grumman innovation was to have the outboard three feet of the wing, including that portion of the aileron, break off at 9 gs, which would allow the remaining, less-leveraged wing structure to sustain an ultimate load of 13 gs. The weight savings was 230 lbs, a significant reduction for an airplane with an empty weight of only 7,600 lbs.

The weak link, so to speak, was just outboard of middle hinge of the aileron so adequate roll control would still be available in the event that both tips broke off, which was the expectation. The concept was successfully tested in flight using an F4F Wildcat modified with breakaway wingtips. F8F flight tests were subsequently accomplished by Corky himself to include landings with only one wingtip broken off to demonstrate controllablity in the asymmetric condition. Demonstrated and proven, the safety tip was standard on production Bearcats. 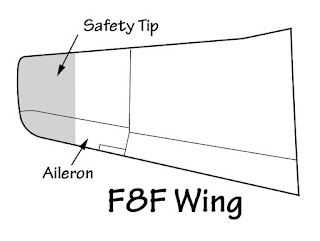 It also worked in service, with pilots even landing on carriers after they had parted company with their wingtips by overloading their airplanes. "I made a wide gentle pass—had 100 knots at the 90-degree point. The pass felt very little different, just a little fast. The landing was normal with quite a bit more shock on catching the wire."

There were, however, fatal crashes associated with the breakaway of only one wingtip. One was a Blue Angel who failed to pull out of the downward finish to a Cuban 8 at an airshow in September 1946. Another was during pullout from a dive-bombing run. The resulting sudden roll reduced the effectiveness of a pullout to less than that needed to avoid hitting the ground.** That only one wingtip came off instead of both was ascribed to variation in manufacturing tolerance (size of rivet holes, clamp-up load, skin thickness, etc) in the structure and a difference in the weakening over time of the weak-link structure in each wing caused by carrier landings and buffet during high-g maneuvers.

The response was to add a ballistic backup to the weak link to insure that both tips came off at the same time. Primacord (a thin plastic tube filled with explosive) and a microswitch were added to the break point and the installations on each wing were connected electrically. If the microswitch opened on one wing, indicating that the wingtip had separated, a circuit would close to detonate the Primacord on the other wing, insuring that its wingtip separated as well.  Corky demonstrated the removal of one wingtip ballistically in flight. 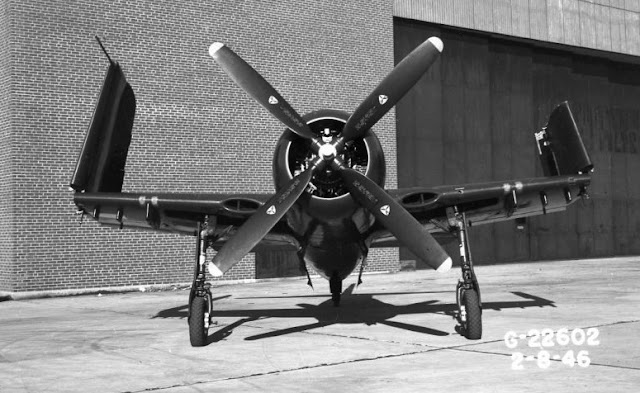 If there was understandable nervousness about bombs embedded in aircraft structure, it wasn't enough to insure that adequate safety measures were established or observed although the installation was identified with a red line on at least some Bearcats. 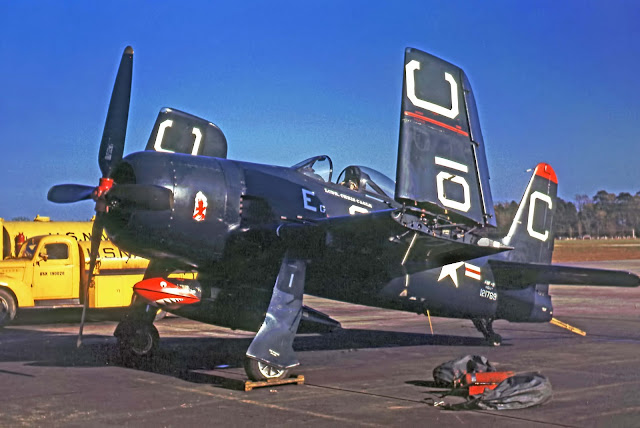 It was therefore probably inevitable that a short circuit during maintenance on an F8F caused the wing tip to separate, killing a sailor. According to the Flight Manual "it has not been possible to make and maintain a continuously reliable installation of the explosive wing-tip-shedding device in service airplanes." The result was an airframe change in early 1949 to delete the Primacord installation and eliminate the weak link with a structural beef-up of the wing.

* A somewhat different story of the genesis of the Bearcat than the one provided by Corky in his monograph can be read here: http://thanlont.blogspot.com/2011/02/conception-of-f8f-bearcat.html

** Contrary to what you might think, the loss of lift from the wing tip was usually accompanied by a net increase in lift from the rest of the wing rather than a decrease. The nose-down pitching moment of the wing was reduced by the loss of the wing area but the nose-up pitching moment of the horizontal tail remained the same, resulting in an increase in the angle of attack of the wing at the amount of aft stick when the tips came off. If the increase didn't exceed the angle of attack for stall, lift would therefore increase.
Posted by Tailspin at 12:44 PM 4 comments:

All this time, I had misidentified the jet engine under the F4U at Patuxent River in 1944 as the Westinghouse 9.5-inch engine instead of its original 19-inch Yankee engine. I'm not sure why I didn't compare it more closely to the airplane's tires to establish its diameter. However, it's clear to me now that it was the bigger Yankee engine so I've revised the post accordingly: http://thanlont.blogspot.com/2011/03/from-hero-to-zero.html
Posted by Tailspin at 11:20 PM 1 comment: