Once upon a time, when I was a preteen, I lived with my mother and stepfather in the Philippine Islands. He was assigned as the Assistant Public Works Officer at Naval Air Station Sangley Point, which was on a small peninsula located on the south side of Manila Bay adjacent to the town of Cavite. The runway had been built in early 1945, following the retaking of the area from the Japanese in World War II. It wasn't a very big air station, with almost 50% being the runway, taxiway, and parking areas... 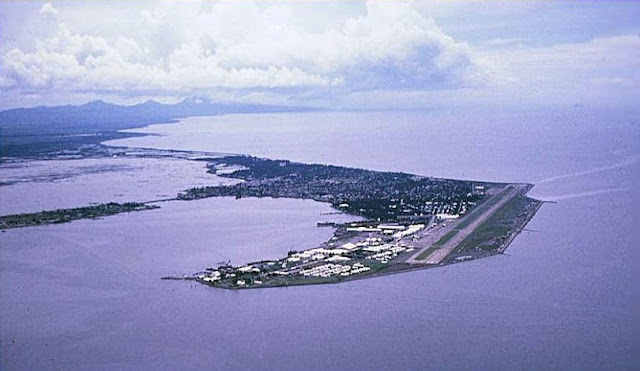 In addition to having a runway, Sangley provided a base for Navy seaplanes that patrolled the area.

Sangley provided tow-target services to ships and airplanes of the Seventh Fleet operating near Manila Bay.

Another valuable service was providing temporary parking at Sangley's west end for the air group of a carrier when it visited Manila Bay for R&R. This freed up the carrier's deck and hangar for maintenance and cleaning, in addition to providing more room for maintenance on the airplanes themselves, albeit al fresco in most cases.

(When we first arrived at Sangley, there were many French Corsairs parked in the west end, having been ferried in from Vietnam following the fall of Dien Bien Phu in early 1954. A French aircraft carrier eventually showed up to take them away.)

Navy aircraft carriers would also offload airplanes at Sangley that were too badly damaged for repair aboard. These would come in by lighter for temporary storage until a ship came by that was headed back to the states.

I spent many happy hours watching the Cougars, Skyraiders, Banshees, etc. taking off and landing since the runway was only a few hundred feet from our house and no one seemed to care if I sat in the grass 50 feet or so off the taxiway. One memorable occasion was when Princeton parked many of its VS-21 S2Fs at Sangley in early 1956 for a week.

I made friends with one of the pilots and got to sit in an S2F with my mother. 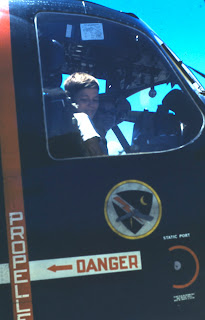 Equally memorable was that I got to fly an S2F, a Turbo Firecat conversion with turboprop engines, almost 40 years later courtesy of the great folks at Conair. (See http://www.cascadeaerospace.com/products/Turbo%20Firecat/)

You probably haven't heard of NAS Sangley Point. While my stepfather was stationed there, NAS Cubi Point at Subic Bay was established and Sangley became a Naval Station in accordance with a treaty with the Philippines that stipulated there would only be one Naval Air Station, per se. It continued to be an active and important U.S. Navy base until it was turned over to the Philippine government in 1971.

Although I had been enamored with airplanes since I could remember, the two years at NAS Sangley between 1954 and 1956 (and one of the great airplane movies, The Bridges at Toko-Ri) convinced me that I wanted to be a Naval aviator, even if it did mean dying in a ditch in Korea. That, alas, was not to be because of my poor eyesight but I did the best I could under the circumstances.
Posted by Tailspin at 3:28 PM 6 comments:

One of the many interesting presentations at the Joint Fighter Conference held at NAS Patuxent River, MD in October 1944 concerned the Navy’s upcoming transition from the .50-calibre machine gun to the 20 mm cannon for fighter armament. It was given by Commander J.P. Monroe, head of the armament branch of the Bureau of Aeronautics.

A dive-bomber, the SB2C Helldiver, was the first U.S. Navy carrier based airplane to become operational with cannon, two replacing the four .50-caliber machine guns. 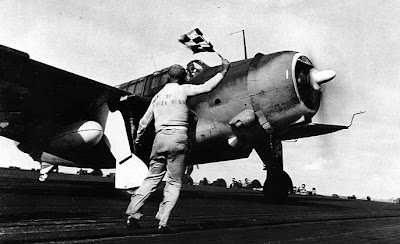 There were teething problems but none were serious relative to the perceived benefits of the larger round and firing mechanism. The Navy was also procuring the F4U-1C with four 20 mm cannon (the “C” suffix probably did not stand for cannon armament per se but was simply the next designation change letter; see http://thanlont.blogspot.com/2013/06/navy-aircraft-designation-suffixes.html). 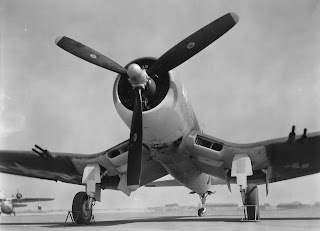 Commander Monroe noted that, from a gun “horsepower” standpoint, one 20 mm cannon was equivalent to three .50-caliber machine guns. “The 20 will go through .75 inch of armor at 500 yards, while the .50 cal will go through only .43.” He also noted that the cannon barrel was not as susceptible to being damaged with long bursts like the machine gun’s.

There were disadvantages, of course. He noted that the time of flight of the 20 mm shell was longer, .75 second for 500 yards as compared to .62 second for a .50 caliber bullet. The 20 mm installation was also heavier, “one half as much ammunition for the same weight.” The standard of 400 rounds of ammunition for each gun (30 seconds) could therefore not be maintained so only 200 rounds of 20 mm ammunition could be provided per gun. Nevertheless, “The 20 is lethal enough to get far more results out of that 200 rounds than the .50 ever will get out of the 400 rounds.”

Only 200 F4U-1Cs were bought and the F4U-4 retained the six .50-caliber armament configuration, primarily due to ongoing reliability problems with the original Hispano-Suiza cannon. However, the problems were corrected so a handful of F4U-4s were produced with cannon as the F4U-4B (the suffix now designating an armament change, not built for the British) and cannon were standard on the F4U-5. 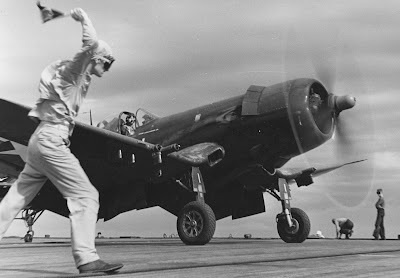 The Navy’s last propeller-driven fighter, the F8F Bearcat, was initially produced with only four .50-caliber machine guns. However, during production of the -1s, the armament was changed to four 20-mm cannon. The change was externally evident by the longer barrels and the bulges required over the chambers. The cannon were standard on the F8F-2 so no B suffix was required. 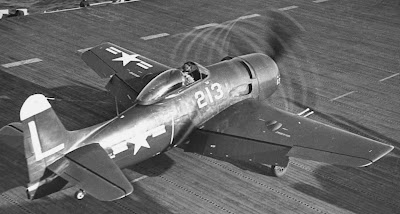 The Navy’s first jet, the McDonnell FH-1 Phantom, was produced with four .50-caliber machine guns. The North American FJ-1 Fury was delivered with six. However, the Navy's third jet fighter, the Vought F6U Pirate was armed with four 20 mm cannon, as were all subsequent Navy fighters up through the Vought F8U Crusader. 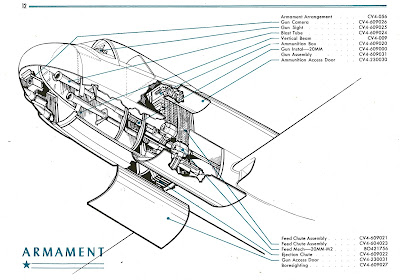 When the Navy procured the North American F-86 Sabre as a carrier-based fighter, it required the substitution of 20 mm cannon in addition to the changes required for operation to and from aircraft carriers. The armament change was evaluated in the one-off XFJ-2B BuNo 133756, the B suffix again denoting an armament change.

Note that the airplane had nothing in common with the two XFJ-2s other than F-86 parts. It was basically an F-86 with four 20 mm cannon, a Navy gun sight, and a modified windscreen.

The Air Force somewhat belatedly realized the need to transition to 20 mm, a change accelerated by combat experience during the Korean War.
Posted by Tailspin at 9:07 PM 3 comments: