In early 1953, Lockheed proposed its Model L-242 in response to the Navy's requests for proposals meeting its Outline Specification 130. 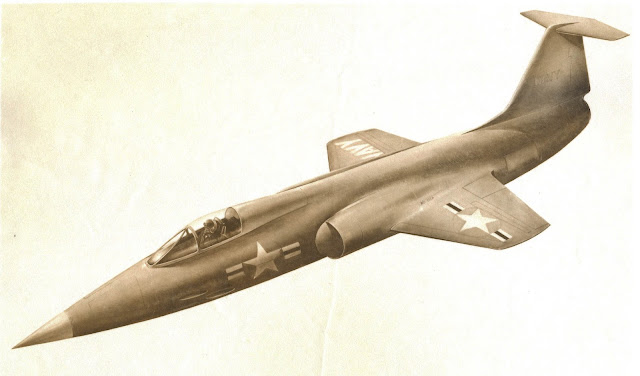 The design was similar to the Model L-246, which won the USAF competition for an F-100 day fighter replacement and was designated XF-104. Lockheed projected that it would easily meet or even better all of the Navy's requirements, including takeoffs from and landings to an aircraft carrier. With the same wing area (not much) and thickness (three inches) as the Air Force's version.

One reason that this was plausible was that the original XF-104 had a shorter fuselage that the production F-104 overlay shown here in gray, which reduced empty weight. 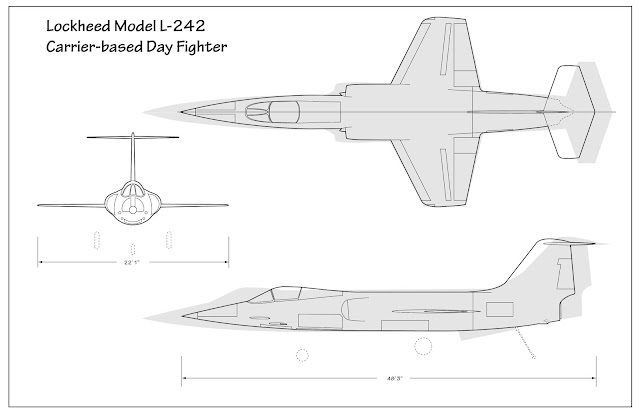 Another was that what little wing there was had features to maximize lift. Spoilers were the primary roll control with the inboard segment of the full-span flaps doubling as roll trim. A new low-speed lift concept, boundary layer control, was also incorporated to increase trailing-edge flap effectiveness.

Although the proposed design had zero dihedral,  subsequent wind tunnel testing would have resulted in five degrees of anhedral.

It was of course, very unlikely that the Navy would have trusted Lockheed, which had essentially zero carrier-based fighter experience (there was a modified P-80 that was evaluated at-sea*) with a contract for one even if none of its favored suppliers bid. As it happened, Vought won the competition with what was to be the F8U Crusader. And that bet was hedged by contracts to North American for the FJ-4 Fury, Grumman for the F11F Tiger, and Douglas for the F4D-2 (F5D) Skylancer. Only McDonnell was left out, which was worrisome for a time in St. Louis, but the consolation prize led to the F4H Phantom.

One footnote to the Navy Zipper (the sound and impression it made on a low, fast flyby) story was a modeler's April Fools article about the Navy modifying two F-104s for carrier operation, for which photos of two F-104s being used to test the Sidewinder at China Lake (or maybe just to get some flight time in one) added plausibility.

That sucked in more than one publication. For an example: http://www.warbirdsnews.com/warbirds-news/fun-facts/lockheeds-navy-f-104-u-s-navy-markings.html