Your Speed May Vary

Once upon a time, the U.S. Navy and Air Force vied with each other and the military services of foreign countries to set aircraft performance records in speed and altitude. Attempts at surpassing the existing records did not always reflect operational capability although the record-setting aircraft usually bore a much closer resemblance to their counterparts on the flight line than say, some of the air racers at Reno to their original configuration.

For example, in the days before jets had enough power to exceed the speed of sound in level flight and the attempt had to be made at an altitude just above the ground, the venue for the record attempt was increasingly someplace hot. The limit on speed had become the abrupt change in drag with Mach number. Mach number varied with air temperature. Higher temperatures meant a higher Mach number and therefore the airplane could achieve a higher speed over the ground.

However, the record aircraft were almost never stock. Engines vary more than you might think in terms of horsepower and thrust even before being tweaked for more. Engine and other limits were routinely exceeded at the expense of durability and safety. Removal of nonessential stuff, e.g. military equipment, to reduce drag and weight was a standard practice. (If guns and ammunition were carried, the fact was always worthy of note in the press release announcing the record.)

I was recently reminded of a couple of examples of somewhat more extensive modifications. The thrust provided by the J79 engines in the F4H-1 that then LtCol Robert Robinson (USMC) used to set a speed record of 1,606 mph in December 1961 was augmented by water injection.

Robert F. Dorr Collection
If you look closely at the aft cockpit of the record setting airplane, you'll see what appears to be the water tank.

Note also the non-standard reinforcement of the windscreen. According to Robbie, the windscreen over-temperature light was on for most of the speed run, warning of imminent failure.

Needless to say, Phantoms in the fleet were not capable of anywhere near 1,600 mph.

Even more extensive modifications were made to a Navy HSS-2 in pursuit of a helicopter speed record. In February 1962, it was used to set a record of 210 mph versus a fleet Sea King's top speed of not much more than 150 mph. 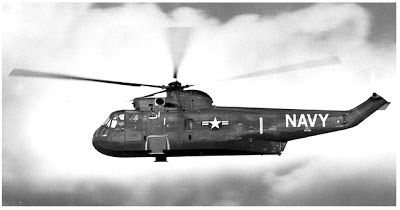 The most significant modification was the replacement of the landing gear with skids. It was also lightened as much as possible and tape and filler applied to reduce drag. For more on that project, see http://www.thisdayinaviation.com/5-february-1962/

Unofficial speed records were even more likely to approach bogus. One example is the well- publicized report that the XF4U-1 had demonstrated a speed of 400 mph. For a discussion of the unlikelihood of that, at least in late 1940, see http://thanlont.blogspot.com/2008/10/400-mph.html.

Sometimes the false claim was at least somewhat inadvertent. On 17 June 1980 during envelope expansion with a full load of research instrumentation and no particular attention paid to drag reduction, the Bell XV-15 tiltrotor research aircraft achieved a measured true air speed in level flight of 301 knots as first calculated by engineering. 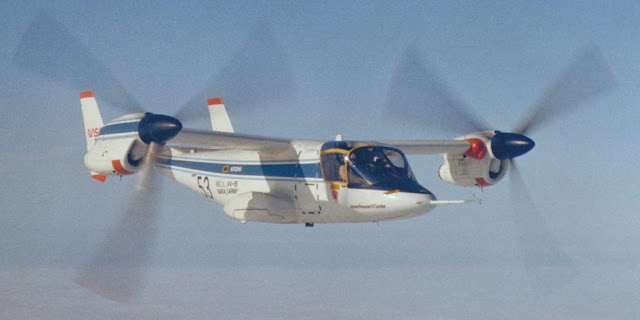 Much celebration ensured and a press release immediately issued by marketing. As it turned out, the initial calculation failed to take into account the correction required on the outside air temperature measurement, understandably because it is negligible at the speeds that helicopters normally achieve. When recomputed correctly, the actual speed was a few knots less than 300. Bell management chose not to update the number since it had already been promulgated worldwide. In any event, the milestone did not have the expected impact because 301 knots—while roughly twice that of a helicopter not tricked out like the HSS-2—was half that achievable by a jet-powered VTOL like the Harrier. Not until the XV-15 flew at the Paris Air Show in 1981 and it was subsequently flown by guest pilots did the operational benefit of the tiltrotor concept become apparent to prospective customers.

Carrier Onboard Delivery (COD) is normally provided by an airplane that utilizes the arrested landing gear and catapult to arrive and depart. Shore-based helicopters sometimes deliver or pickup personnel and packages when a carrier is not too far away. Because of the drag of the rotor, helicopters have half the range or less of an airplane of the same size. (These CH-53Es are actually landing on Truman to refuel on their way to Kearsarge.)

The tiltrotor is an aircraft that combines the hover capability of the helicopter with the speed and range of a turboprop airplane. The Bell-Boeing V-22 is the first operational tiltrotor, initially assigned to Marine Corps for troop transport and logistics. Recently, VMX-22 conducted an evaluation aboard Bush of the V-22 as a supplement to the existing Grumman C-2 COD capability. One benefit is that the V-22 does not require the use of the catapult and arresting gear so it can takeoff and land regardless of the status of the spot aboard the carrier or existing flight operations. 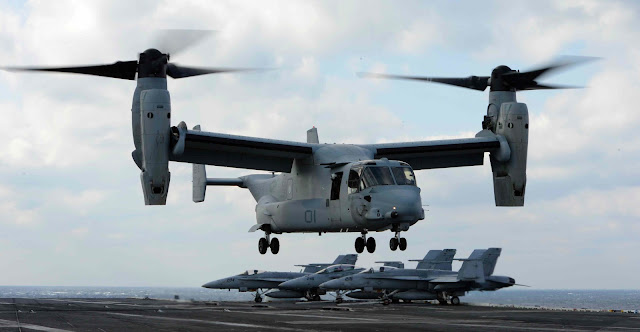 Following the evaluation, the V-22s were loaded with Marine Corps and Navy personnel and their personal equipment for the flight back to the Marine Corps Base at Quantico, Virginia.

This is a picture taken a few years ago of V-22s in airplane mode used for enroute cruise. 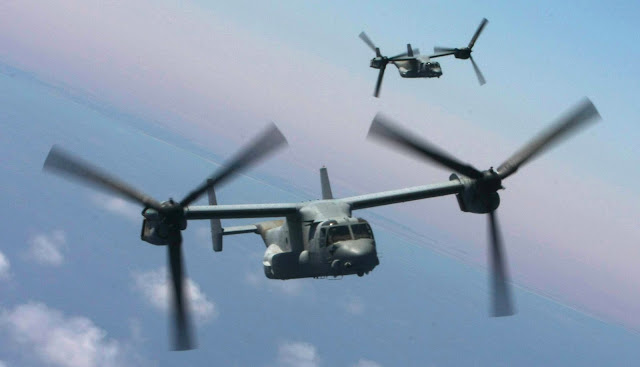 This were not the first evaluation of the V-22 aboard an aircraft carrier. This picture was taken of a V-22 aboard Bush in March 2012, when night operations were part of the testing. An at-sea evaluation has also been accomplished aboard Truman. 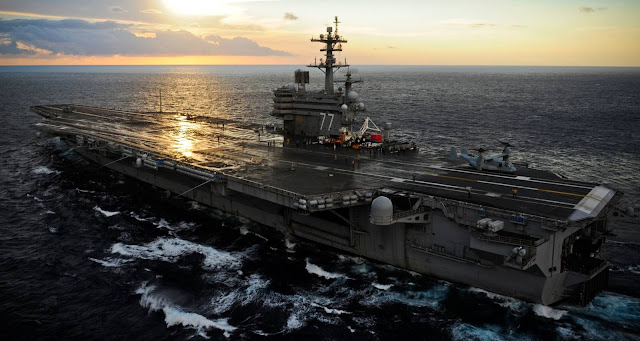 Posted by Tailspin at 6:29 PM No comments: