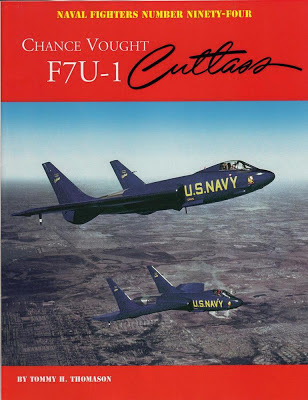 After I finally decide that I've found everything I'm going to find about a subject and my monograph on it is published, somebody shows up with something. In this case, it was the F7U-1 and Rick Koehnen. He was looking through the photos on the Flicker photostream of the San Diego Air & Space Museum (http://www.flickr.com/photos/sdasmarchives/) and saw some photos of an F7U-1 in flight. 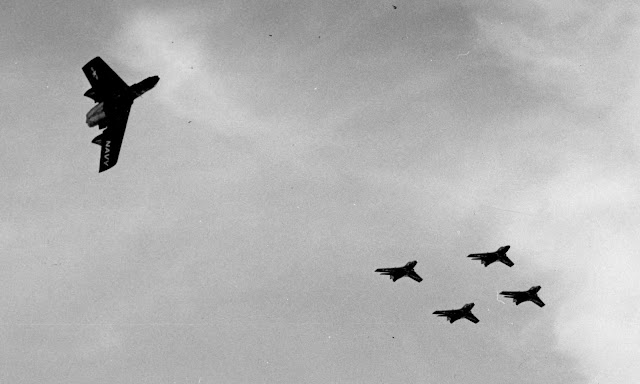 I had guessed from the following picture that the F7U-1 assigned to Pt Mugu had participated in an air show, based on the fact that there were Air Force Thunderbird F-84Gs in the background.

I'm certain of that now. Another picture taken at the same event shows the Point Mugu markings on the fin.

The venue was probably the first air show to be held at NAS Miramar, California in October 1953, based on the fact that the Thunderbirds had just come into being in June. The diamond formation of F9F-6s in the air with the F7U-1 are the Blue Angels.

For much, much more on the F7U-1 and the transition to the F7U-3, buy my monograph that is available from Sprue Brothers (http://store.spruebrothers.com/product_p/gin094.htm), the publisher (http://www.ginterbooks.com/NAVAL/NAVAL.htm), and Specialty Press (http://www.specialtypress.com/vstore/showdetl.cfm?Product_ID=2537&DID=8). See Amazon only for the reviews: http://www.amazon.com/dp/0984611479
Posted by Tailspin at 11:32 PM 1 comment:

Click HERE
Posted by Tailspin at 1:05 AM No comments: