Before the advent of computer-aided bombing, it wasn't easy to hit a target with a bomb even if the intended target was not maneuvering. In order to account for the ballistic drop of the bomb after release, the bomb had to be dropped at a specific combination of airspeed, altitude, and dive/descent angle. Because of the degree of difficulty in having all three nailed at the same time as well as having the target centered in the sight (particularly while being shot at), the pilot had to drop at a higher altitude if he was a little fast and at lower a lower one if his dive was a little shallow. And if the drop was a fraction of a second late or early, the accuracy decreased. Not to mention the presence of wind aloft that would affect the fall of the bomb.

It was therefore necessary to practice. Since prewar carrier-based airplanes were intended to carry heavy bombs in order to do the most damage to an enemy ship or shore installation, only three bomb pylons were generally provided. To get the most effective training from a flight, practice bomb dispensers were therefore developed. These were the original Multiple Ejector Racks. The Mk 42 was a plate on which three practice bombs could be loaded. The more widely used Mk 47 was a streamlined dispenser that was about 40" long.

The practice bombs were electrically dropped one at a time, separation aided by a spring. A small black-powder spotting charge was incorporated so the impact point could be easily seen. The bombs were also reusable. For more on them, see http://www.nebraskaaircrash.com/practicebombs/anmk43.html

Navy fighter planes have always been used for bombing as well. The number of aircraft that can be loaded on a carrier is finite so it is important that fighters can  drop bombs if necessary. Fighter pilots trained with the practice bomb dispensers as well (this one on an early Corsair looks like it might have only had six compartments).

Rockets were somewhat easier to aim, easier even than guns or cannon because they were propelled in flight and therefore did not go ballistic after being released. As a result, a pilot only needed to fire a few at the expected airspeed, altitude, and descent angle to be used in combat and note where they hit relative to his aiming point. Accuracy was affected of course by the wind, any sideslip (if the airplane wasn't heading the same way it was going, the rockets would tend to align themselves with the relative wind immediately after launch), and any damage to or misalignment of the fins. The Sub Caliber Aircraft Rocket (SCAR) was developed for training to reduce the cost of expended rockets.

It was 2.25 inches in diameter and about 29 inches long with a tail-fin span of 8.3". It could be configured to imitate either the 3.5 inch or 5.0 inch rocket with the result that some were about six inches longer. Adapters were provided for the different rocket pylons that were used. 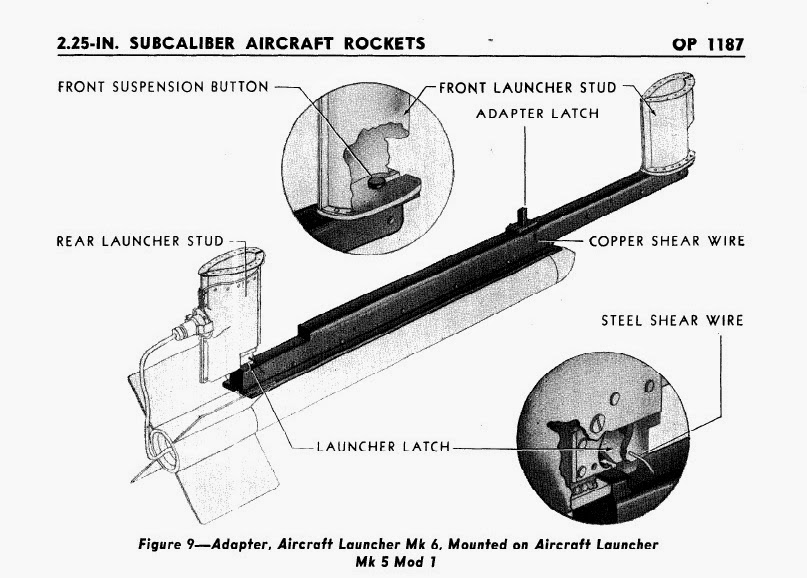 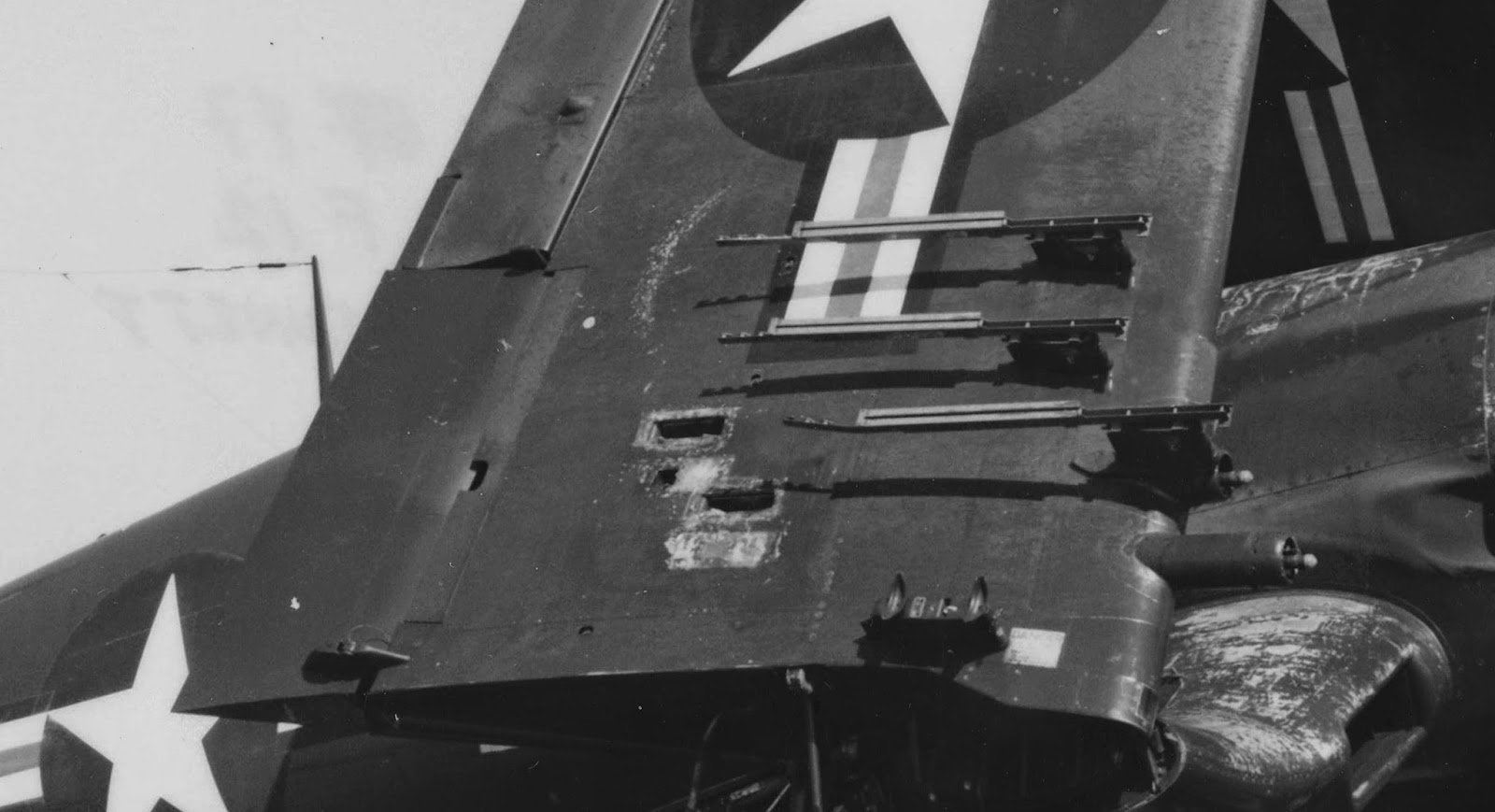 A rather bulky camera could be mounted externally on the aircraft for training flights to provide feedback to the pilot on his technique and accuracy. This was particularly useful for torpedo bomber pilots who couldn't make multiple drops on their training flights (or any drops at all due to the expense of torpedoes). 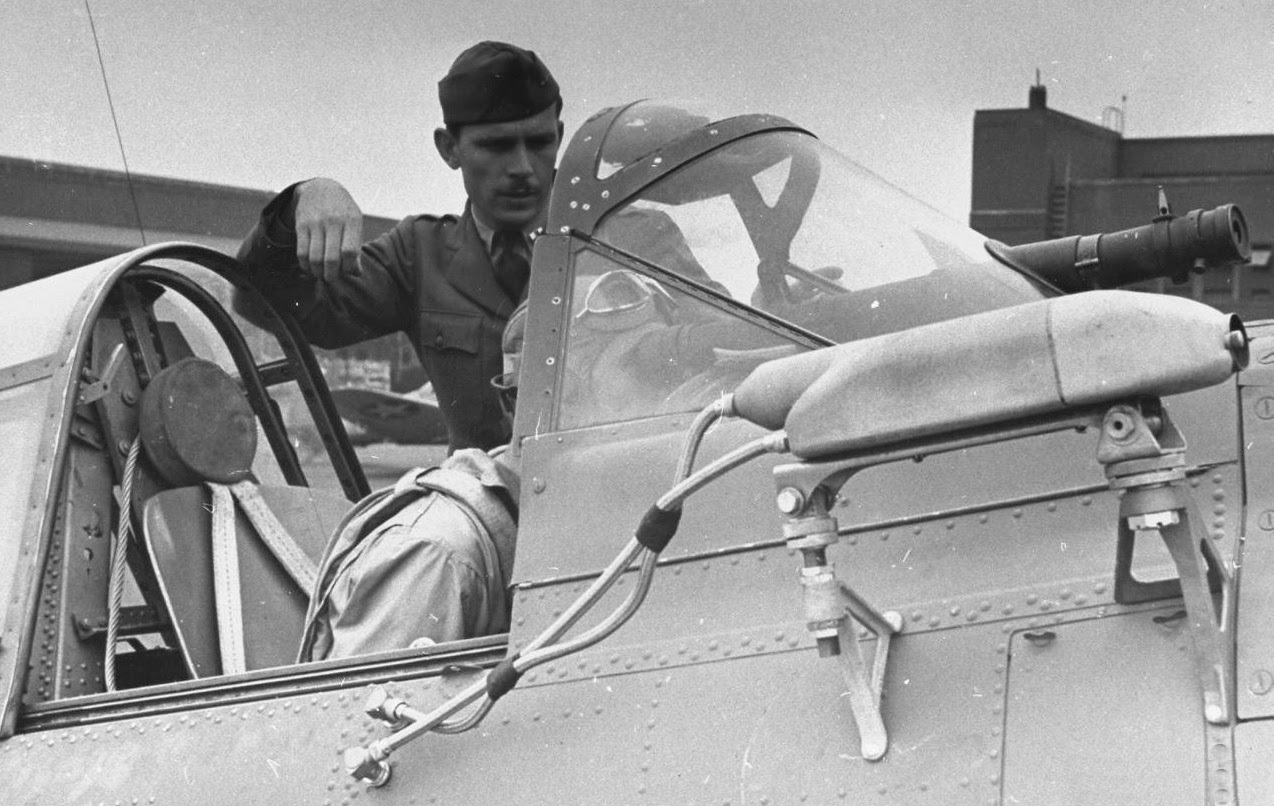 Thanks to David Collier for suggesting the topic.
Posted by Tailspin at 5:53 PM No comments:

No matter how hard an author tries, errors sometimes go unnoticed. New information often becomes available after a book goes to press. Here are some corrections and additions to my book, U.S. Naval Air Superiority. 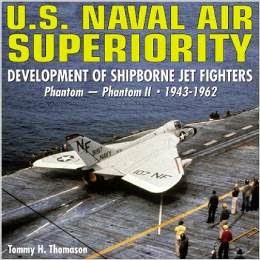 Page 71: The first paragraph in the left-hand column has been misread to mean that an unswept inboard section was added. For clarity, the first two sentences should have been: The wings were P-63 outer-wing panels mounted to sweep aft from the P-63's existing inboard-wing section. Retaining this unswept section was an attempt to correctly position the swept-wing's center of lift with respect to the aircraft's center of gravity without making major changes to the structure.

Page 72: The caption for the lower left picture refers the reader to Chapter 11, page 80, for a picture of the crash. The page is actually 180.

Page 119: At the end of the second full paragraph in the right-hand column, the implication is that the landing weight was limited to 23,500 pounds for the rest of the F7U-3M's operational career. In his book, The Wrong Stuff: Flying on the Edge of Disaster, John Moore apparently misremembered the results of the F7U-3M carrier-qualification testing. According to the F7U-3M Service Acceptance Trials dated 30 November 1956, the gross weight limit for axial deck landings (flat approach) was 23,000 pounds but for mirror approaches (descending to an angled deck), the limit was raised to 25,300 pounds.

Page 147: The caption for the upper picture incorrectly states that the original F4D tail hook arrangement did not survive to the prototype. It was in fact present on at least one of the prototypes. However, the Skyray that was used for the initial carrier evaluation had an A-frame type tail hook.

Page 191: The text does not mention the development of deck and approach lighting to provide better lineup visualization of short final in low-visibility conditions and at night as these were introduced at the end of the period covered buy the book. For example, the drop line or drop lights were added to the fan tail, along with the first sequenced-strobe flashers, in 1964.

Page 231: The caption for the two-position Crusader wing actuator picture states that "the center of lift was behind the pivot point." This was not true for all speed and g conditions but when there was a tension load, it was relatively low and well within the actuator capability. There were inflight structural failures where the Crusader wing came off, but the first component to fail was never the actuator itself.


Page 237: D'Oh! Two different months are given for the McDonnell AH letter of intent in adjacent columns. For the record, it was dated 18 October 1956.

Page 238: Cdr Noel Gaynor should be CAPT Noel Gayler and he was representing DCNO (Air Warfare) not BuAer.

Page 248: Fifth line in the left column, delete the word "but" so the sentence reads, "Not only was it positioned high on the vertical fin, but when it was generally accepted that..."

Page 258: I failed to mention that the F8U-2NE, F-8H, and F-8J could be armed with the AAM-N-7 Sidewinder IC (AIM-9C) semi-active radar homing (SARH) variant developed to provide true all-weather capability for the Crusader. According to the January 1969 Ault report, however, it added "only marginal Fleet capability...because of performance limitations at altitudes below 10,000 feet, lack of user confidence and interest, and deteriorating logistic support." It was subsequently withdrawn.

Page 267: In the first sentence of the second complete paragraph, the Lockheed/Vega PV-1 was the Ventura, not the Hudson. The Navy did operate a few Hudsons but they were designated PBO-1, signifying that they were produced by Lockheed Burbank. (Thanks to Lee Griffin for identifying that error.)

Chapter 13: After Air Superiority's publication, thanks to Jared A. Zichek, I became aware of a day-fighter proposition from North American, a General Electric J79-powered "FJ-5" derived from the F-107, a bigger and J75-powered USAF fighter-bomber. 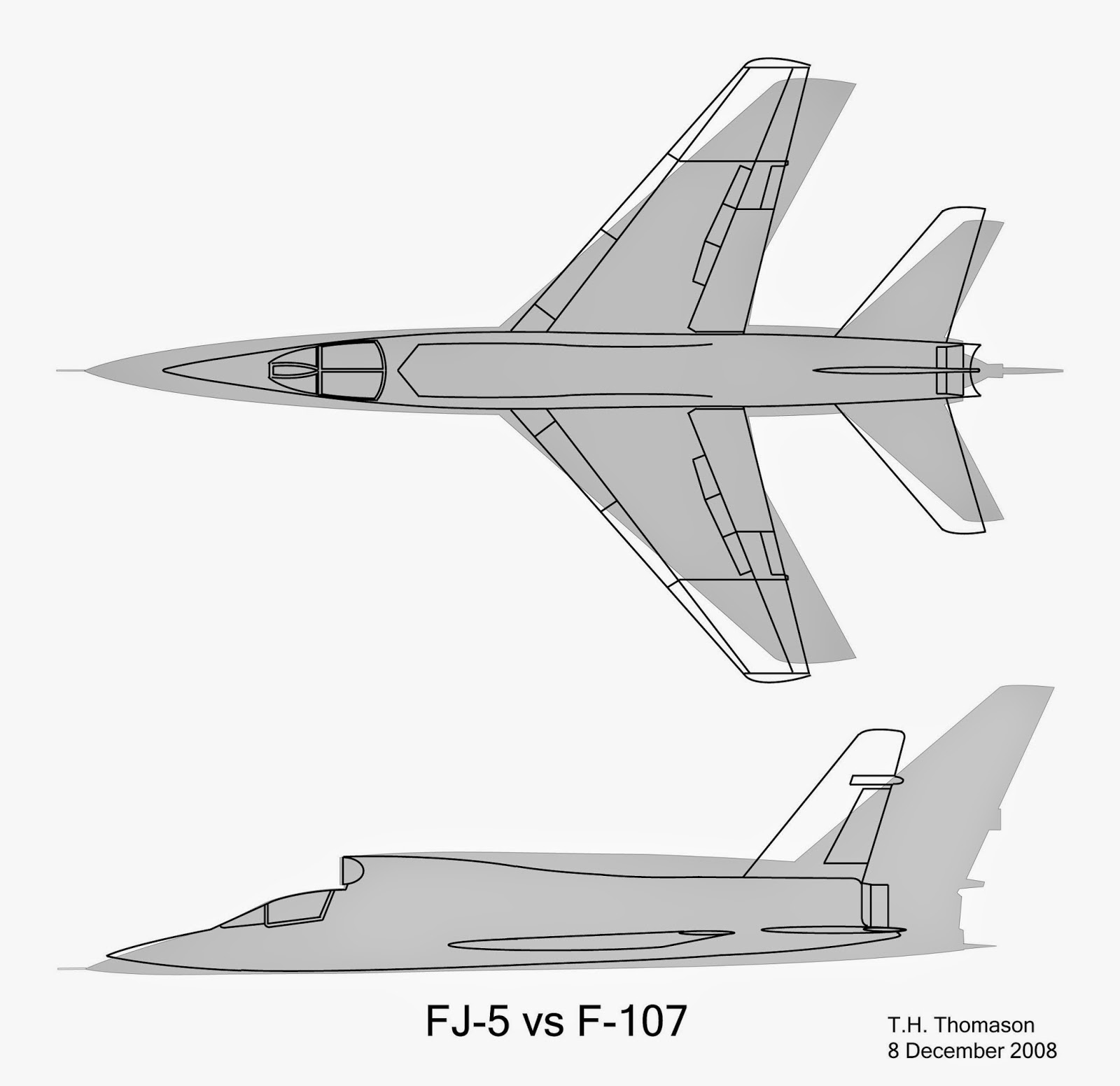 Here's how it tied into the Vought F8U, Grumman F11F, and North American FJ-4 programs:

The Super Tiger (the real F12F; see http://thanlont.blogspot.com/2008/09/is-this-grummman-f12f.html) and the FJ-5 were attempts to compete with the F8U from a performance standpoint using the thrust-to-weight and SFC advances provided by the new J79 engine with variable inlet guide vanes. Once the F8U went supersonic on its first flight, neither proposition had any chance of being bought by the Navy. Grumman at least got to demonstrate what the F11F would do with the J79 because the Navy wanted some flight experience with the new engine before the F4H flew.

For a link to buy Jared's monograph on this airplane, click HERE.
Posted by Tailspin at 5:16 PM No comments:

A Brief History of the F-111B Flight Test Program

I thought I had posted this before but I can't find it. 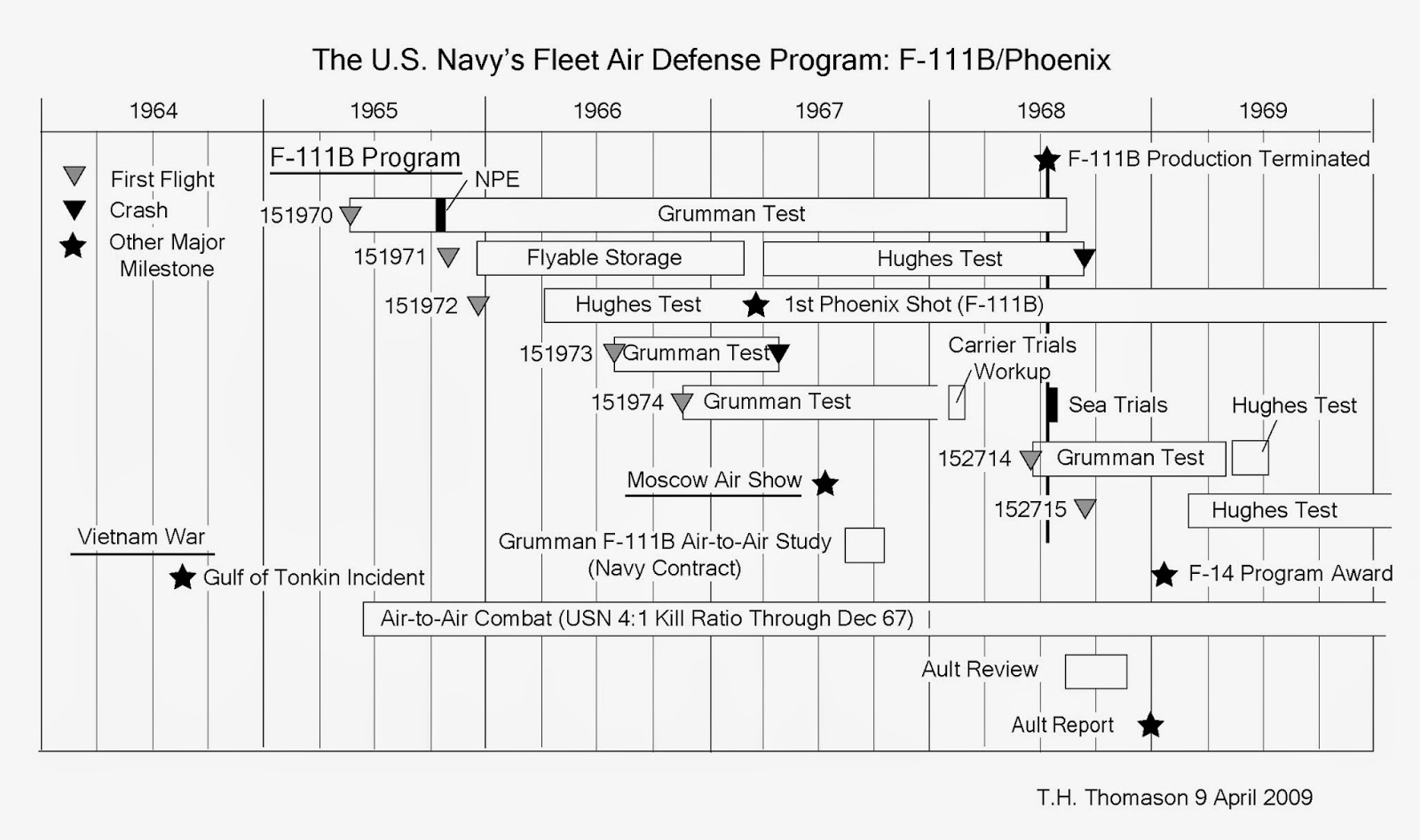 151970 Stricken Dec 1969.  Stored at the Naval Surface Weapons Center, Dahlgren VA for vulnerability testing. Transferred to Pax River for potential display at the museum. Subsequently sold to a scrap dealer in the Washington, D.C. area and destroyed in 2000.

151971 crashed Sept 11, 1968 off California coast, reportedly due to a component failure or disconnect in the rudder control system. Test pilots Barton Warren and Anthony Byland killed.

151972 Ferried to NAS Lakehurst NJ in late 1971. Stricken in Dec 1971.  At least the fuselage was shipped to China Lake for vulnerability testing and remains there in outdoor storage.

151974 transferred to NASA Ames for wind tunnel testing following at-sea carrier trials aboard Coral Sea  off the west coast, based at Point Mugu, CA. Ferried to Moffett Field from Point Mugu on Oct 10, 1968 and stricken the next day. Following the wind tunnel test, the wings were removed to be used as the test article for a jet/deflected flap concept. The fuselage was trucked to China Lake, where it was stripped of usable parts for the ongoing Hughes test program and the carcass eventually scrapped.
152714 ferried to Davis-Monthan AFB from Hughes and stricken on 25 May 1971. It was shipped to McClellan AFB, California for potential use in battle-damage repair training. (McClellan was the Air Force repair depot for the F-111.) It was eventually sold to a scrap dealer and for several years the fuselage resided in a junkyard two miles east of Mohave, California. It was acquired by the Cactus Air Force museum and is now located at Silver Springs, Nevada near Reno.
152715 ferried to China Lake from Hughes in April 1971 for desert exposure testing and stricken in May 1971. It still resides today.
Posted by Tailspin at 3:56 PM 1 comment: