The A-12 Program is History

For my previous posts on the tortuous path of the settlement through the courts and negotiations:

For a Naval Aviation News article on the A-12 Avenger when it still had a bright future, albeit for only a matter of weeks, see:
http://www.history.navy.mil/nan/backissues/1990s/1990/nd90.pdf

This is an illustration from that article: 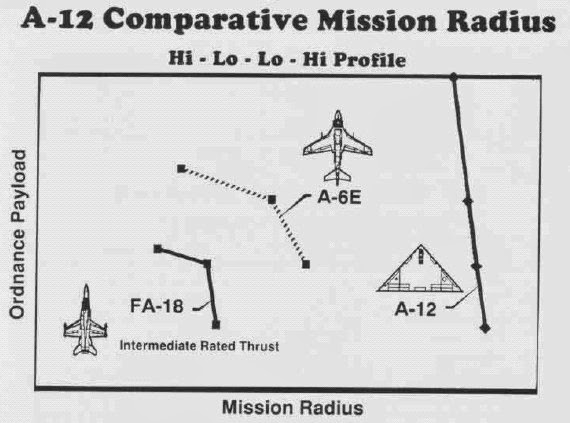 Unfortunately, the Navy lost credibility with the Secretary of Defense with respect to the program's cost and schedule and the airplane's weight and capability, which resulted in its cancellation in early January 1991.*

Instead of this great leap forward in carrier-based strike, the Navy eventually decided to buy the F-18E/F and a player to be named later, UCLASS (Unmanned Carrier Launched Airborne Surveillance and Strike).

*For a very detailed account of the A-12 program's rise and fall, see The $5 Billion Misunderstanding by James P. Stevenson. For a much shorter and more readable one, buy my book, Strike from the Sea (see the sidebar).
Posted by Tailspin at 5:56 AM 2 comments:

Anybody can find their way nowadays with GPS, even back to a carrier far at sea, never having caught sight of land. It took considerably more skill in World War II, although the naval aviator was provided with electronic tools to do so.

For more on each of these tools, see http://tailspintopics.blogspot.com/2014/01/world-war-ii-navy-carrier-airplane.html

However, if all else (or simply the electricity) failed, the pilot had a fallback, his plotting board. (The pilot also needed to be sure that he didn't fly farther from the carrier than he had fuel for the return; none of his electronic aids provided that information.) 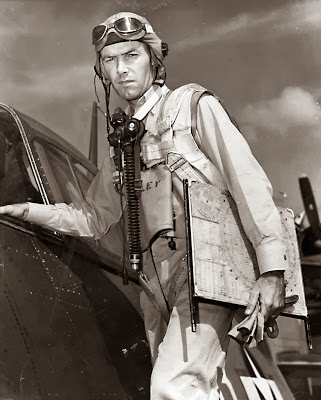 This is famed Jame H. Flatley Jr., about to man his F6F with his plotting board under his arm.

It was removable, like a kitchen drawer, sliding in and out of a slot in the lower side of the instrument panel. 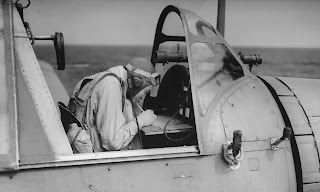 A circular slide rule, fondly known as a whiz wheel, was mounted in the lower right-hand corner of the plotting board. This was used to calculate ground speed, fuel burn, etc. The big circular grid was used to plot the carrier's projected track and the airplane's actual track. A plastic cover allowed the pilot to mark on the board and erase it for subsequent use. 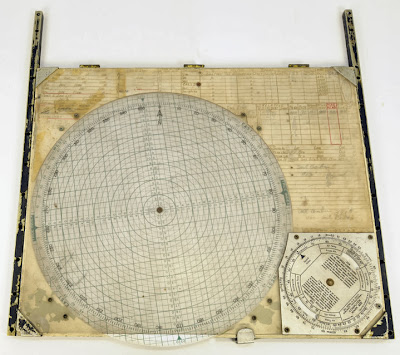 Before takeoff, the pilots would be briefed on the carrier's intended course and speed and the forecast wind aloft at various altitudes. Since missions might last three hours or more, the carrier might be long gone and out of sight relative to its position at takeoff. Wind aloft was also critical because airplanes, like balloons, drift with the wind and do not necessarily go in the direction that they are headed or at the speed being flown through the air.

After takeoff, the pilot could resort to the same navigation technique of captains on sailing ships in centuries past, keeping close track of airspeed, heading, and time at the different speeds and heading, the manual equivalent of an inertial navigation system. Wind aloft then had to be factored in to determine the ground speed, track, and distance made good. (Pilots were taught how to estimate the strength and direction of the wind from various clues like the appearance of the waves.)

The result was a continuous record of the approximate position of the airplane relative to that of the aircraft carrier. When the time came to return, a course back to home plate could quickly be determined.

Of course, the pilot might not know exactly where he had been, since a lot of maneuvering might have been involved so his plot was not complete or accurate, the wind might have been different from forecast and checking it not possible, etc. The carrier also might not have made good its intended plan of movement. So if the carrier was not in sight when he got to where he thought it was, he would execute an expanding square search.

The Brits considered the workload and degree of difficulty in finding the way back to the carrier to be so high that their front-line fighter at the start of World War II, the Fairey Fulmar, had a two-man crew, pilot and navigator.

On or about the time that jets were introduced, the plotting boards were removed and no longer required in favor of knee boards and presumably an increased reliance on the electronic aids.
Posted by Tailspin at 11:55 AM 2 comments: