Development of the Davis Barrier 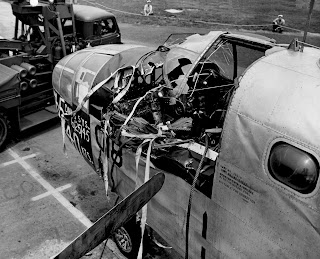 The Davis barrier was created by the Naval Aircraft Factory to replace the conventional barrier that was satisfactory for stopping single-engine propeller-driven airplanes that didn't pick up an arresting cable with the tail hook but not for twin-engine ones like the F7F Tigercat. The problem was that unlike the single-engine situation, where the propeller hit the barrier cable at a very shallow angle and wouldn't cut it, the nose gear of a twin-engine airplane would pull the cable out and forward, so when the propellers got to it, the cable might be at enough of an angle for it to be cut.
This wasn't exactly the situation here, but demonstrated the problem. In this test, the Davis barrier used a one-inch steel cable to actuate the retarding cable that was to snag the main landing gear. Fortunately the PBJ (U.S. Army Air Forces B-25) was unoccupied for the test, because a prop cut the actuating cable and flailed the cockpit with it. This resulted in the actuating cable becoming a canvas strap.
Posted by Tailspin at 2:47 PM No comments: 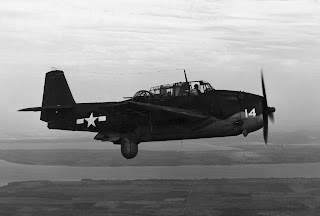 Although it worked, the Navy fighting the war in the Pacific would have nothing to do with it. At the insistence of the Navy in Washington, the Special Unit involved was finally allowed a 30-day trial in late 1944 against Japanese targets on and near Bougainville and Rabaul that arguably demonstrated the effectiveness of the concept. It was then summarily withdrawn and disbanded. (It's not clear whether the beyond-visual range capability was utilized.)

For a good summary of the TDR (the very similar TDN wasn't used in combat), see http://evanflys.com/tdr-1

Is This The Grumman F12F?

In a word, No. The F12F designation was assigned to a derivative of the F11F Tiger that was to be powered by the new General Electric J79 engine. It's not clear if a contract was ever issued but two Bureau Numbers were assigned. The program was canceled in January 1956.  The effort to evaluate the F11F with the J79 continued, however. The first of two F11F-1Fs flew in May 1956.

Pictured is the Grumman Design 118 proposed to the Navy in late 1955. It and a single J75-powered alternative were rejected in mid-1956 in favor of the Vought XF8U-3. It is unlikely that the Navy ever considered it seriously enough to assign it a designation since the McDonnell F4H was already on contract. Somebody subsequently and erroneously concluded, because of the concurrency of the projects, that it was the D 118 that received the F12F designation. Someone else has speculated that it would have received the popular name "Lion". Officially it never did and I've seen no evidence that Grumman referred to it internally as that.

Note that since enthusiasts continue to insist that it was the F12F,  I've updated this post with more information on the actual F12F program here:  http://thanlont.blogspot.com/2018/02/one-more-time-grumman-f12f.html
Posted by Tailspin at 10:30 PM No comments: 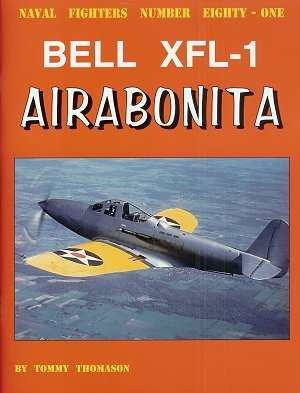 I have this weakness for unappreciated "failures" (see Bell HSL and Grumman/GD F-111B below). My latest attempt to provide a nuanced and balanced account of a little known or notorious aircraft program is the one-off Bell XFL-1, a navalized version of the much more successful but frequently maligned P-39 Airacobra.

Next, I plan to write a monograph on the XF8U-3, which actually enjoys a great reputation, possibly because it was canceled after initial envelope expansion and before its development was complete and operational evaluation had been accomplished.
Posted by Tailspin at 9:47 AM No comments: