It Seemed Like a Good Idea at the Time V

The Vought F7U-1 was one of the more gimmicky designs ever to fly. Some of the wonderfulness came directly from it being "tail-less", which sounds like a simplification but introduced complications from a carrier landing standpoint. An airplane with no horizontal tail can't have trailing edge flaps, since there's no way to counteract the nose down pitching moment that flap extension causes. No flaps means a high approach speed, which was unacceptable for a carrier-basing, unless the airplane has lots of wing area and/or approaches at a high angle of attack. In order to minimize the former, Vought relied more on the latter. The high nose attitude resulted in a long nose gear. To reduce the rearward loading on the nose gear strut attachment when the nose wheel touched down, the wheel was spun up to speed before landing by compressed air from the engine impinging on a set of vanes on the nose wheel hub. The main gear could be set in either of two positions, forward for takeoff and aft for landing. And the tail hook was attached to the top of the fuselage, so the nose would not pitch down when the hook engaged a cross-deck pendant. This resulted in the hook being stowed on the top of the aft fuselage instead of the bottom, which meant that it was longer than usual. That led to a three-segment hook that folded back on itself for stowage. 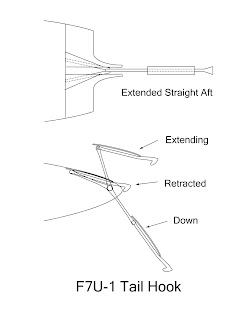 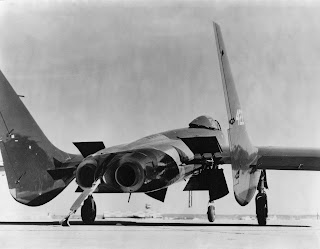 It's difficult to see in either the illustration or the photo, but the most forward segment of the hook  was a V-frame. It was covered by a pair of triangular doors. When the hook was extended, it was retained in its stowed position by a latch until the hook engaged a cross-deck pendant and then was released to pivot in line with the two hook segments aft of it.

As if that weren't complicated enough, the hook throat included another Vought innovation, a "trigger" that forcibly ejected the cross-deck pendant after the aircraft was stopped to insure that the hook released the pendant. If it didn't, a sailor had to run out and knock it loose so the airplane could taxi out of the landing area.

During shore-based trials at Pax, the rectangular fairing over the aft hook segment came off during three arrestments, so it was reattached to the V-frame and hinged to the side to allow the hook to extend. The pendant ejector was deleted "in an effort to simplify the arresting hook assembly." The whole experience was summarized with the statement: "The arresting hook assembly is complicated, and its practicability for service use is doubtful."

The F7U-3 had a conventional V-frame hook attached to bottom of the aft fuselage.

The Knee Bone Connected to the Thigh Bone

There was relatively little innovation in the basic tail hook design. Whether it was a V-frame or a single "stinger" appears to have been based on whether the aircraft structure had a single keel or two heavy stringers on the bottom of the aft fuselage because the tail hook attach point had to tie in to a main structural load path.

For example, the FR-1 Fireball, which was an early attempt to take the jet engine to sea by combining a piston engine in the nose with a jet engine in the tail, provided for removal of the jet engine by making the aft fuselage a separate bolted on structure. To avoid loading that joint and inexperienced with the dynamics of an arrested landing, Ryan engineers attached the tail hook to the aft end of the forward section of the fuselage. When the hook snagged a cross-deck pendant, the result was a nose-down pitching moment. This was really hard on the nose gear and there were failures. 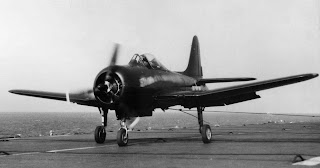 Douglas, somewhat more savvy about carrier operations, initially chose to integrate the tail bumper and the tail hook on the F4D, as shown here on the mock up with the hook in the "stinger" position for taxi over the remaining wires and barriers. 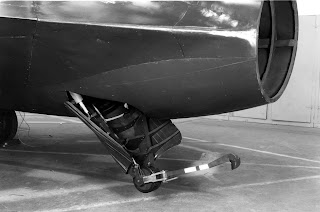 At least one of the two XF4Ds were built with this design, but by the time the XF4D went to sea for initial carrier trials, this arrangement had been replaced with a more conventional V-frame hook that was attached directly to the airframe.
Posted by Tailspin at 11:08 AM No comments:

It Hurts When I Do That 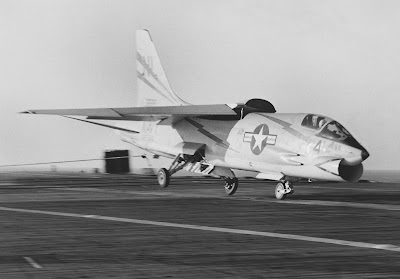 Because of the relationship of the tail hook and the center of gravity, many (Tom Weinel,  F8U pilot and subject matter expert, says this was actually the norm) arrestments resulted in the airplane briefly wheel-barrowing. As you might imagine, the initial impact could be hard on the nose wheel, which sometimes broke. There wasn't much to be done with the geometry and other changes to the hook installation didn't have much effect, so a stronger nose wheel and shock strut with more stroke was retrofitted.

It could have been much worse. The F8U program began while the Navy was still operating jet airplanes from straight-deck carriers. The proposal shows a retractable Davis-barrier pickup on the belly, which was necessary due to the distance between the nose wheel and the main gear and the likelihood, due to the low ground clearance, that the barrier cable might bounce off the belly and drop back down on the deck. It kept the barrier cable up until the main gear could snag it. The landing crash rate of the F8U was tolerable on an angled-deck carrier; on an axial deck, the F8U might well have suffered the same fate as its sibling, the F7U: a terrible reputation and a quick exit from the inventory.
Posted by Tailspin at 8:00 AM No comments: