The CVE was an escort carrier built, in the beginning, on an oiler or merchant-ship hull. They had the smallest flight decks and slowest top speed of all the U.S. carriers. (See http://thanlont.blogspot.com/2012/12/making-it-harder-than-necessary.html) There were also far more of them commissioned during World War II than any other carrier type.

I had thought that during World War II they 1) only deployed "composite" squadrons and 2) never deployed with F6Fs. It turns out that I was wrong on both counts.

A composite squadron at the time, by the way, was called that because it operated more that one type of airplane, e.g. fighters as well as bombers. They came into being because the small number of airplanes that could be carried by an escort carrier didn't justify the bureaucracy associated with two or three squadrons, an air group commander, etc.

The FM-2 Wildcat was specifically developed for CVE-based VC squadrons. It was lighter and had a more powerful engine than the FM-1. The vertical fin and rudder were increased in size to compensate for the horsepower increase. 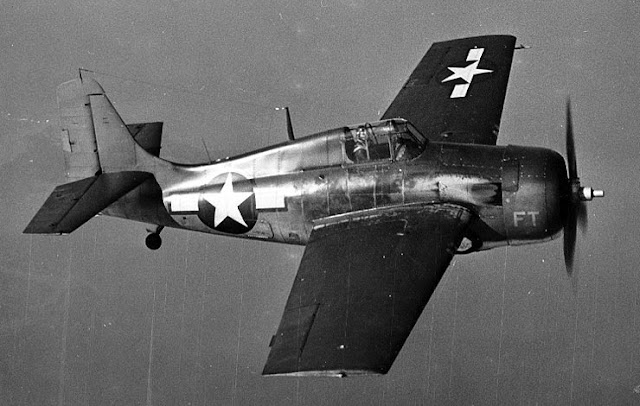 Grumman did a design study in mid-1943 of an F6F-3 modified for operation from CVEs. The "F6F-4" was to be armed with four .50 caliber guns instead of six and have the 75-gallon fuselage fuel tank deleted; the "F6F EX. W.T." was to have a greater wing span. Each wing tip was to be extended two feet and the ailerons moved outboard, with the span increase being split between the ailerons and the flaps by seven inches and 17 inches respectively. The study concluded that the F6F was faster but the FM-2 was smaller and had a lower stall speed and better takeoff performance, making them more suitable for operation from a CVE.

As it turned out, there appear to be many instances of CVEs deploying with Hellcats.

Barnes (CVE-20) reportedly deployed with VF-1 flying F6F Hellcats in November and December 1943. Some of the results were ugly. The pilot was killed in this landing attempt during workups in October. (Note the very unusual variation on the tri-color scheme.)

National Archives 80-G-202611
This one wasn't fatal but still embarrassing for all concerned. 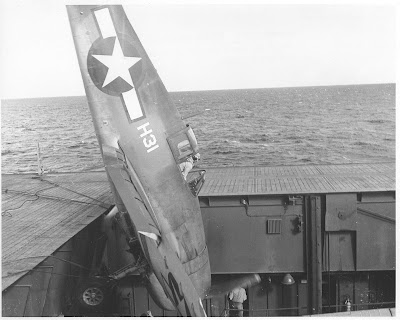 Some Sangamon-class CVEs deployments during World War II were with both a fighter squadron equipped with F6F Hellcats as well as a VT squadron assigned TBMs or a VC squadron operating SBDs and TBMs. The Sangamons (only four were built) were a bit longer and had a bigger hangar deck than the earlier U.S. Navy CVEs. The later Commencement Bay-class CVEs were similar in size and considered big enough and fast enough for Vought F4U Corsair and Grumman AF Guardian operation.

And Now for Something Completely Different II

In April 1956, a VX-1 crew in a Sikorsky HSS-1 was conducting dipping sonar trials off Key West using Corporal (SS-346) as a target when cockpit instruments indicated that there was a problem with the main transmission. Since a transmission failure in flight was to be avoided at all costs, the pilot, CDR W.F. Culley, prepared to ditch while, I'm guessing, the sonar operator signaled the submarine to surface.

In any event, the submarine did surface and Culley quickly coordinated a plan with its skipper, LCDR E.O. Proctor, to save the helicopter by landing it on the deck aft of the conning tower. The ad hoc helipad was reportedly only two inches wider than the tread of the HSS-1's tires. It was unorthodox and risky but successfully accomplished with LTJG G.D. Ellis Jr out on deck serving as the first helo/submarine LSO.

Securely tied down, the HSS-1 was brought back to Key West and craned off. 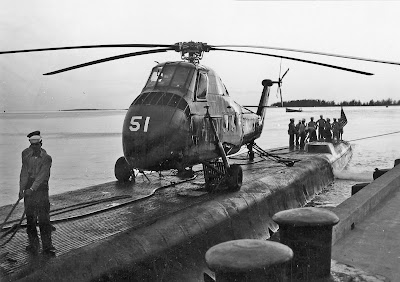 Posted by Tailspin at 1:52 PM No comments:

The best history ever written on the A-6 Intruder is by Mark and Rick Morgan: 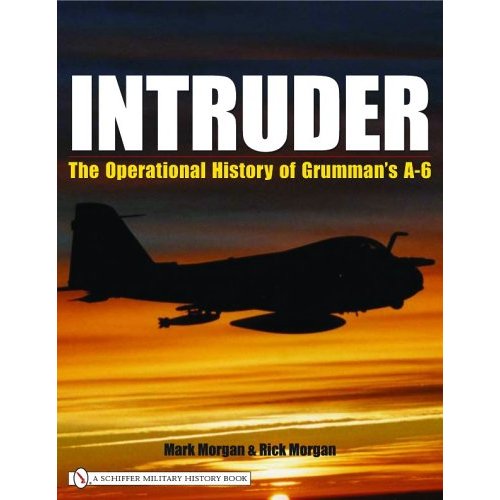 I'm going to go out on a limb here, since I haven't seen it yet, and say that the second-best book on the A-6 Intruder has just been released: 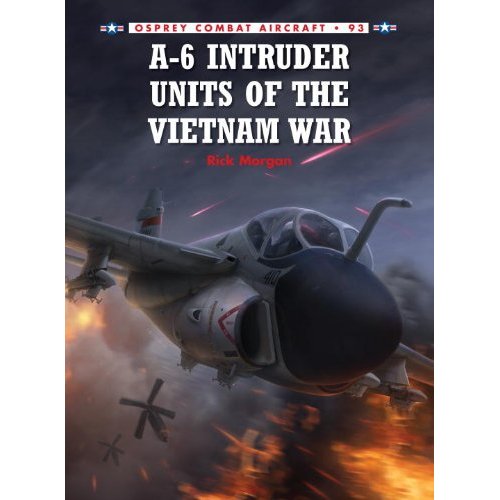 Note that it's by Rick Morgan who I rely on as a subject matter expert. It's available on Amazon and at a substantial discount.

Plus if you buy this book, you'll help convince a publisher to contract with Rick to do a similar work on the A-3 Skywarrior, which I for one would welcome, and a follow-on that covers the A-6s post-Vietnam.
Posted by Tailspin at 6:48 PM 2 comments:

To recap briefly, the 1949 XF3H mockup review report mentions a limit of 25' 4" due to the requirement for two airplanes to pass in the hanger. The span of what was to become the A4D was 25' when it was first laid out by R.G Smith. Based on the actual or proposed spans of some early 1950s single-seat jets, the limit was subsequently increased to about 27' 6". 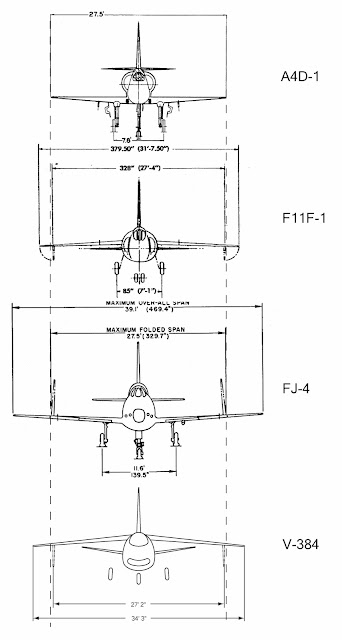 One answer based on this 1948 Douglas proposal illustration is that it depends. Princeton was an early Essex-class carrier. The aircraft shown, an XF4D proposal, has a computed span when folded of 25' 9.5" based on the diagram (it was actually 25' 6"):

Note that the clearance on the left side is only 18," whereas the other two clearance points are two feet apart, and that the clearance on the right is dependent on the height of the wing and then perhaps on the wheel base of the main landing gear. In other words, the limit for the folded span could vary somewhat based on the specific configuration of the airplane. Also, a subsequent ship alteration may have increased the width of this pinch point or resulted in the narrowest passage being someplace else on the hangar deck (fire-door openings didn't count). Another constraint as previously mentioned was the width of the elevator and the desire to move two aircraft up to the flight deck or down to the hangar deck at the same time.

Posted by Tailspin at 2:20 PM No comments:

Making It Harder Than Necessary?

Designing a carrier-based aircraft means dealing with several constraints that don't have to be addressed by designers of land-based ones. These affected folded size, weight, strength, takeoff and landing performance, etc. and varied by carrier class. However, in general, the designer was required to accommodate the most onerous. One across-the-board standard was the number that could be parted in the first 200 feet of an Essex-class carrier deck. 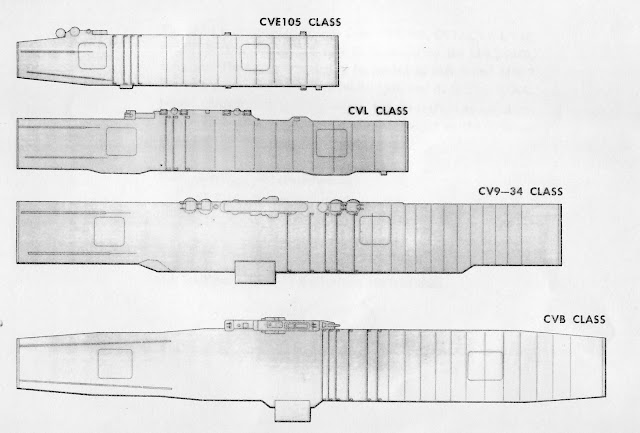 Note that the elevators, deck width, and landing areas were roughly the same size. The major difference in size was total deck area with the escort carriers, CVEs, having the least. They were also much slower than the others, having a top speed of a bit less than 20 knots versus more than 30 for the bigger carriers including the CVLs.

In the early 1950s, due to budget and other considerations, only a few CVEs were deployable. However, many more were mothballed and available for recall if necessary. As a result, design requirements for new programs like the S2F and even the A4D jet attack airplane required operation from CVEs. Northrop proposed an early version of a lightweight fighter to the Navy in the early 1950s, without success, that was specifically focused on operation from CVEs.

Block Island was among the last of the escort carriers to deploy as such (some went to sea later as aircraft transports or communication relay platforms). Here CVE-106 is operating AF Guardians in the early 1950s as an ASW carrier. 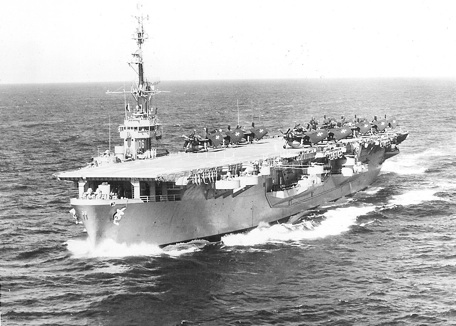 Having to deal with the lower wind-over-deck capability of the CVEs did provide naval aviators with extra margin when operating from the faster carrier classes. It also meant that the A4D Skyhawk could be successfully qualified to operate from former Royal Navy Colossus/Majestic-class aircraft carriers that had been modified with an angled deck, more powerful catapults, and stronger arresting gear like Melbourne, shown here alongside Kitty Hawk.

Somehow a string of what amounts to gibberish (to me, anyway) got inserted into the beginning of the text of "And Now for Something Completely Different". The only browser that couldn't seem to cope with it was Internet Explorer. I fixed it both here and on the most recent post in Tailhook Topics (http://tailspintopics.blogspot.com/2012/12/f-4s-wing.html). Since I don't have Explorer, if those of you who do and have a hang, please let me know with a comment on http://ththomepage.blogspot.com/.
Posted by Tailspin at 12:23 PM No comments: