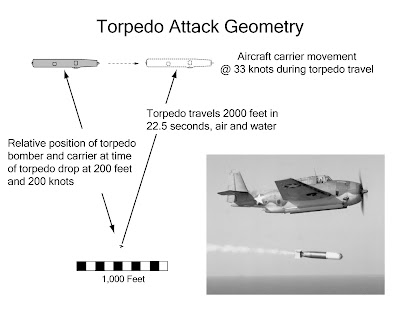 The WWII problem - hit an aircraft carrier steaming at 33 knots with a torpedo that runs at 33 knots. This example is a drop roughly abeam the 800-ft long carrier at 2,000 feet, well inside the 1,000 yards usually cited as the maximum drop distance for accuracy. I've revised the calculation to roughly account for a drop from 200 feet (3.5 seconds of air time) and 200 knots, which increases the average speed of the torpedo significantly and therefore reduces the lead required. It's now obvious that the lead is sensitive to the drop speed and altitude, the ballistics (lift/drag) of the torpedo in the air, and the deceleration of the torpedo in the water until it is at its run speed of 33 knots. The good news is that the lead determination is less sensitive to the target speed, although it's still important, and the ship has less time to turn into or away from the torpedo track.
Posted by Tailspin at 11:03 AM 2 comments:

Sticking With What You Know 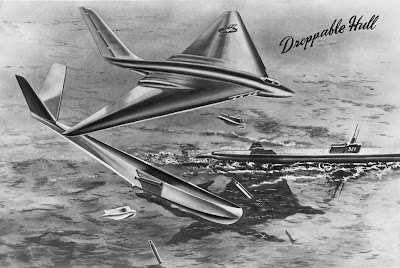 In response to the U.S. Navy's need in the late 1940s for a carrier-based, long-range jet bomber, the Glenn L. Martin Company, the successful purveyor of large sea planes, proposed its Model 245, a hybrid that could fly to the carrier's operating area, refueling from submarines along the way, and then jettison the boat hull for operation from a carrier. It was apparently to be used only from staging from a carrier, because it did not have folding wings. The Navy went with the more conventional Douglas A3D Skywarrior instead.

Pictures and information courtesy of the Glenn L. Martin Maryland Aviation Museum.
Posted by Tailspin at 8:04 AM 1 comment: 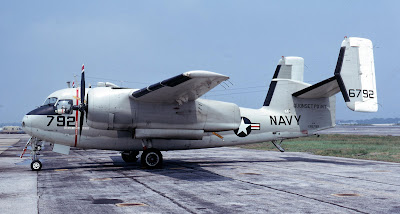 In looking up information to respond to a request, I was reminded of this unique Grumman. It was the cargo version of the venerable S2F ASW airplane, modified to be the aerodynamic prototype for the AEW version of the airplane. The addition of the big radome over the fuselage required the change shown here to the empennage and also a change to the wing fold arrangement. It did not have the stretched fuselage of the production airplane, however, as evidenced by the red propeller warning stripe being so close to the aft edge of the pilot's side window. After flight test, the dummy radome was removed and the airplane resumed its role as a transport.

The production airplane was originally the WF-2, redesignated in 1962 as the E-1B. Strictly speaking, there was a WF-1 but not an E-1A, since the WF-1 was cancelled at the mockup stage. It was to be an S2F airframe simply modified with an APS-20A mounted above the cockpit. This would have preserved the original empennage and wing fold arrangement, albeit with the addition of small fins on the horizontal stabilizer to maintain directional stability.
Posted by Tailspin at 9:28 AM 3 comments: 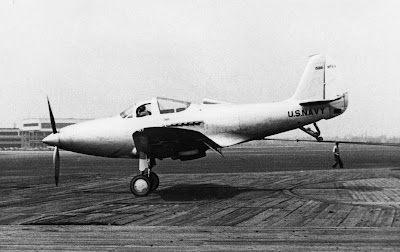 The Bell XFL-1 flunked its shore-based carrier suitability evaluation due to excessive tail rise on arrestment, not that it was being seriously considered for production after the XF4U reportedly exceeded 400 mph in level flight. Note that the pilot is not wearing a shoulder harness, which was surprisingly absent in all Navy carrier aircraft at the time given the abrupt stop involved in an arrested landing.
Posted by Tailspin at 12:02 PM No comments: