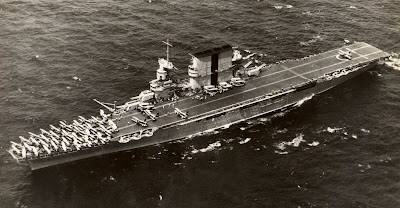 This is Saratoga (CV-3) in the early 1930s with a partial deckload of Boeing fighters, Curtiss or Vought scout bombers, and Martin torpedo bombers. All are biplanes; only the last have folding wings. There are approximately the same number of airplanes on deck as there are in the Hornet picture, with plenty of room left for more. In fact, more than twice as many.

Built on battle cruiser hulls, Sara and her sister ship, Lexington (CV-2), were as big and as fast as battleships, the aircraft firepower augmented by eight 8-inch guns in turrets forward and aft of the island and gigantic exhaust funnel structure. They were slightly bigger and faster than the Essex-class carriers that were built just before and during World War II.
Posted by Tailspin at 3:46 PM No comments:

An Air Group in Transition 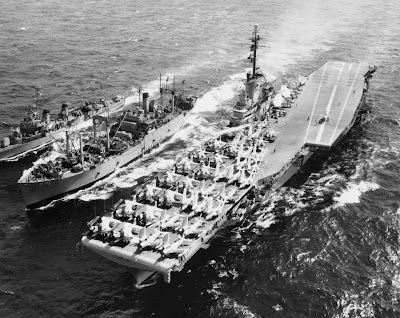 This is Hornet deployed in the Pacific sometime between January and July 1957. The spot configuration appears to be after the last recovery before underway replenishment. All the aircraft, except for the plane guard HUP, are parked to starboard of the foul line denoting the clearance limit for landing aircraft. There are 41 aircraft packed over there, roughly 1/2 to 2/3 of the air group depending on squadron strength. The rest are parked on the hangar deck, which can accommodate a maximum of approximately 40 aircraft depending on the type. (Note that three F9F-8s can be spotted in roughly the same space as two FJs.)

Since these Essex-class carriers only had bow catapults, at least the port column of jets will have to be pulled aft for launches, although the ADs could make deck runs off the angle given appropriate weight and wind.

The deployed air group, CVG-14, consists of two fighter squadrons, one with FJ-3 Furies and the other with F9F-8 Cougars; two attack squadrons, one with AD Skyraiders and the other with F9F-8Bs; and several detachments for airborne early warning (AD-5W), night/all-weather attack (AD-5N), photo reconnaissance (F9F-8P), aerial refueling (the AJs), and utility/plane guard (HUPS) .The F9F-8Bs are place holders for the new light attack jets just finishing development, the A4D Skyhawk and the FJ-4B Fury. The big AJs are at the very end of their useful life, having won a reprieve in the Pacific fleet because of their usefulness as airborne tankers for the jets. They are about to be replaced in their strike role with A3D Skywarriors, the first of which have just been deployed to the Mediterranean.

For some reason, there is no all-weather fighter squadron aboard. This air group had deployed in 1954 with a squadron of F2H-3 Banshees but would then make two successive deployments with no night fighters before VF-141 accompanied it with their F4D Skyrays. 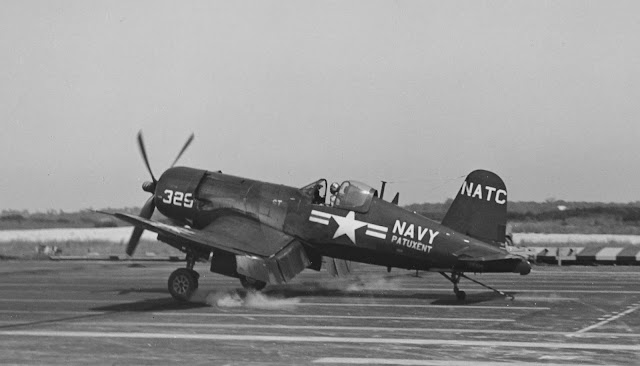 It's actually an AU-1, a close-air support variant of the F4U-5 developed specifically for the Marines Corps since AD Skyraiders were in short supply. It featured additional armor around the engine and accessories, a single-stage supercharger since only low altitude operation was required, and additional stores pylons. This is BuNo 129325 at Patuxent River in September 1952 making a field arrested landing. (AU-1s had been in combat in Korea since June.) However, the AU probably never flew operationally from an aircraft carrier, much less deployed. 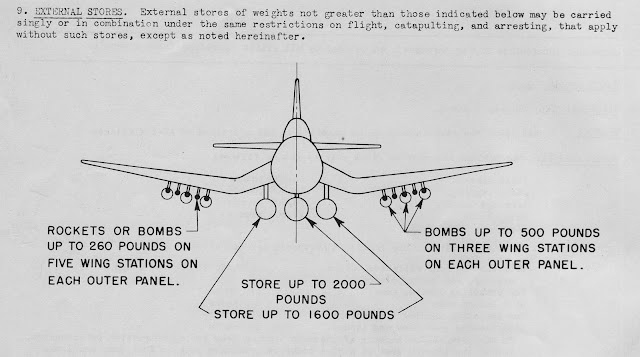 In April 1954, 25 of the 111 built were transferred directly from a Marine Corps squadron to the French Aéronautique Navale to augment its fleet of F4U-7s in Indochina. After the fall of Dien Bien Phu and the withdrawal of French forces, the surviving Corsairs were ferried to NAS Sangley Point in the Philippine Islands and parked until a French carrier was available to transport them back to France. Another five were reportedly transferred to the French in the mid-1950s.
The Marines swapped out AUs for ADs as soon as they could. However, at least a few survived as station hacks through the late 1950s as evidenced by a photo of a gray/white AU assigned to Quantico taxiing out past an early F8U-1, probably at NAS Los Alamitos, CA. (Note that the 'Navy" marking applied in overhaul has been painted over.) These were used to provide ground-based Marine Forward Air Controllers with airplanes to control for close air support training. 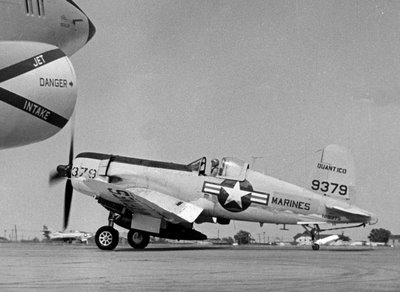 Strike From the Sea Update 3 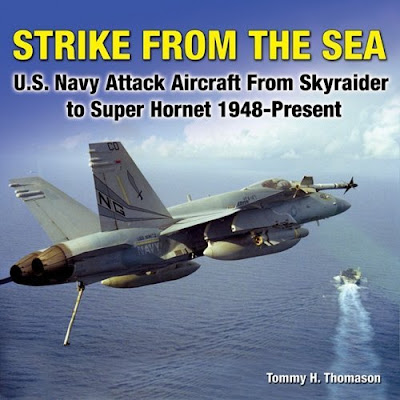 My editor and I have completed the review of the layout proof: all 225+ pages, 300+ pictures/illustrations, and 80,000+ words. As with Naval Air Superiority, it will cover stillborn as well as successful programs, both aircraft and weaponry. The book is on schedule for release in July.

Over the next several weeks, I'll post pictures that didn't make the cut. For example, here is a VX-1 AD-4N loaded with a ring-tail Mk13 torpedo. (VX-1 is an anti-submarine warfare development squadron that can trace its history back to April 1943.) 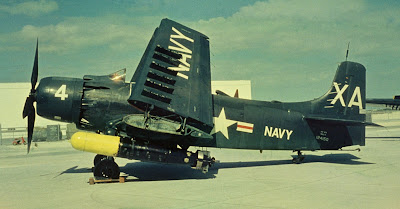 It Seemed Like a Good Idea at the Time II 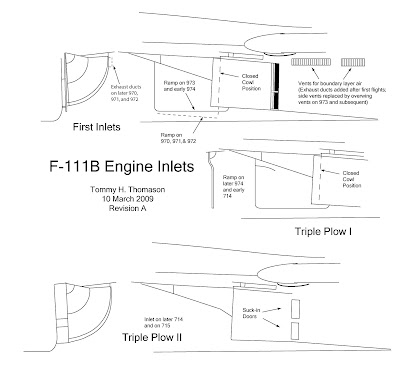 Turbofan engines, which add thrust by compressing more air than will go through the burners and turbine, provided more efficient thrust by increasing the mass flow for the same amount of fuel. The new Pratt & Whitney TF30 and the variable geometry wing were to be combined in the F-111 for far greater range than previously possible in a tactical fighter.

The turbofan had been introduced with commercial airliners so it was considered to be low risk. Unfortunately, in those pre-Concorde days, airliners did not need afterburner or fly at Mach 2. General Dynamics and its subcontractor, Grumman, quickly discovered how intolerant the turbofan was of flow conditions that the fully developed axial-flow jet engines took in stride.

There were three major inlet configurations on the seven F-111Bs that flew, two of which had two different inlets during the flight test program, and Grumman wasn't even the lead for inlet development. It just completed its F-111Bs with the most promising inlet that General Dynamics had defined at the time and retrofitted the carrier-trials prototype and the first pre-production aircraft with the subsequent one.

For a complete and more-balanced history on the F-111B, order my monograph on the F-111B here
Posted by Tailspin at 10:17 PM No comments: 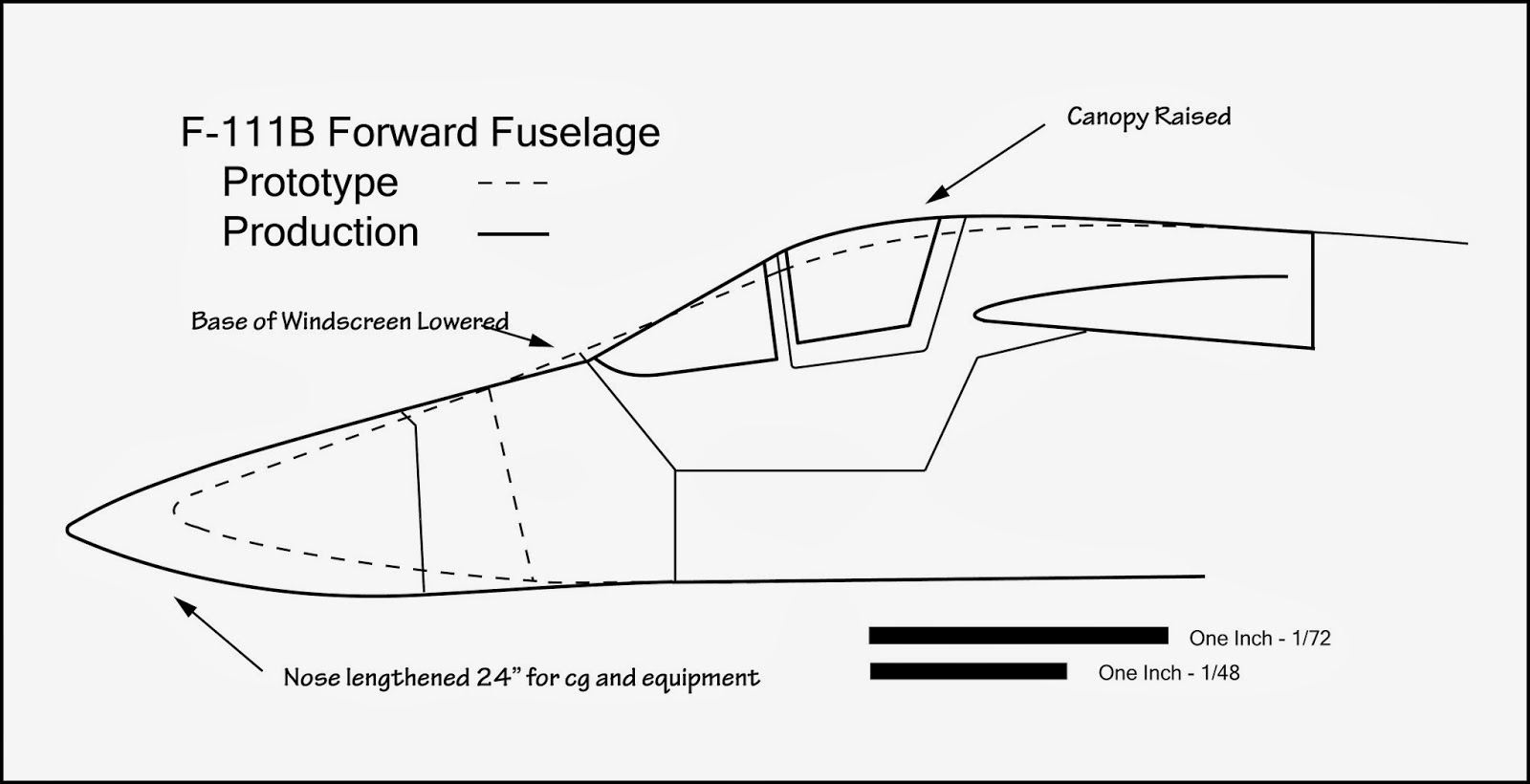