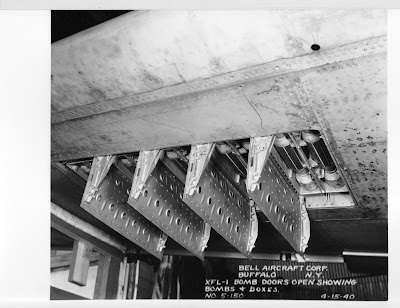 In the late 1930s, the Navy's Bureau of Ordnance developed a tactic to deal with large, heavily defended bomber formations. The fighters would fly above them and drop anti-aircraft bombs. These were small, with a light case containing two pounds of TNT, but would cause considerably more damage than a bullet. BuOrd designed small containers housing two bombs each for installation within the wings, five containers to a side. Twenty bombs were to be dropped at one time, covering an area 150 yards long and 50 yards wide. The pilot was to be provided with a downward vision window for aiming.

This was a requirement in the Navy's 1938 fighter procurement, so the Bell XFL-1 (shown here), Grumman XF5F, and Chance Vought XF4U were all built with the small bomb bays to house the BuOrd containers and a downward vision window. According to a BuOrd history published in 1953: "Although antiaircraft bombs gained a group of staunch advocates, their admirers were more numerous on the higher level of planning than on the lower one of actual combat." The bomb bays were deleted from the production F4U by BuAer although the window remained through at least some (most?) of the F4U-1As. Although BuOrd bought 200,000 anti-aircraft bombs, they were apparently only used as antipersonnel weapons.
Posted by Tailspin at 11:20 AM No comments:

The Navy and Liquid-Cooled Engines 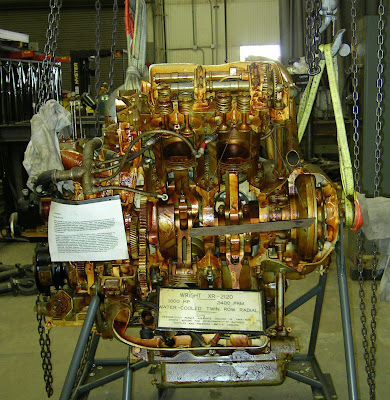 Based on reading most accounts of the Naval aviation history, one would think that the U.S. Navy had no interest in liquid-cooled reciprocating engines for carrier-based airplanes after 1929. Certainly it only deployed ones powered by air-cooled engines thereafter. In fact, the Navy maintained an active role in liquid-cooled engine development into the early 1940s. One example was their selection for evaluation of a derivative of the Bell P-39 Airacobra, the XFL-1, in 1938. The Wright H-2120 was another such effort. It was a very unusual configuration - a twin-row radial engine, but with the six cylinders in the aft row lined up with those in the front row and each such pairing liquid-cooled. The objective was to minimize the frontal area of a radial engine and avoid potential problems with air cooling the aft row of cylinders. The Navy funded development of the H-2120 from about 1933 to 1936, when a 100-hour development test was run at 1,000 shp. At that point, both Wright and the Navy lost interest in pursuing this particular configuration, with the feasibility of air-cooling the second row of cylinders having been demonstrated.
Posted by Tailspin at 2:45 PM No comments:

Not Doing It Right 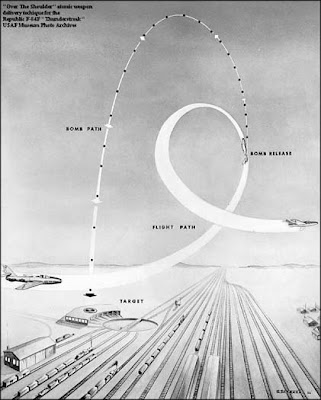 This illustration is what the Air Force Museum is using to depict the "idiot loop" that the Air Force developed in 1952 to more or less safely deliver a nuclear weapon from a tactical aircraft. Safe in terms of both ingress and egress. The problem is, it's depicted as a loop and the actual maneuver is a half-Cuban eight. It starts as a loop (a loop is what you'd be doing on a Ferris wheel if the car you were riding in wasn't free to dangle) but after you go over the top, inverted, you do a half roll back to upright flight while diving back to treetop altitude to depart the premises as fast as possible back along the route you took to get to the target. A loop, as depicted, would keep you in the vicinity of the upcoming blast for too long...

After I wrote this, I discovered that there were proponents (at least one in the Navy, anyway) for the loop recovery from the over-the-shoulder mode and it was evaluated by him at China Lake in an F7U-3. There is a video of it somewhere on the interweb which I can't now find.

It was compatible with LABS since the pilot was free to recover from the inverted climb that he was in by any maneuver he wanted to use. However, in addition to probably not providing as much separation as the half-Cuban eight (I don't have any numbers to compare the two), completing the loop before encountering the ground was not entirely risk free, whereas the half-roll in a dive was. Remember that having enough altitude coming over the top to complete the loop was compromised by having to lug a heavy, draggy bomb a good part of the way up and a dive to build up loop entry airspeed was precluded by both the LABS computation and the need to make ingress at treetop level. The F7U-3 was probably better off from this standpoint because its engines were equipped with afterburners.

In any event, I haven't found any operational descriptions of the use of a loop on the interweb or in the literature other than this report.

This is an illustration of the three LABS alternatives from my book, Strike From the Sea. 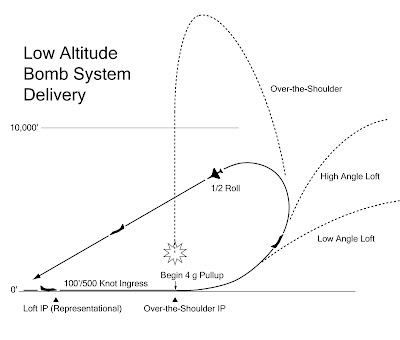