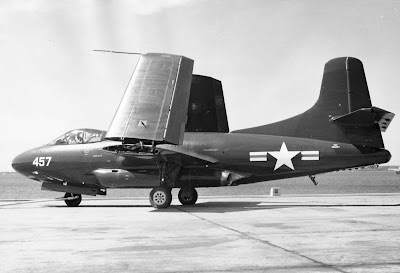 Picture from Roger Besecker
Posted by Tailspin at 5:45 PM 2 comments:

Self Boarding for the Douglas Skyhawk

Up until the early 1950s, self-boarding was a requirement for U.S. Navy carrier aircraft. Boarding ladders were unwelcome on a windy, crowded carrier deck. (Similarly, you didn't see pilots walking to and from their airplanes wearing parachutes: the consequences of a parachute accidentally opening were too serious. As a result, the parachutes were left in the cockpit and the pilot strapped it on or connected it to a torso harness once he was seated.)

With the advent of the large jets that set nose high like the F3H Demon and F7U Cutlass, however, self-boarding provisions began to require mountaineering skills. See HERE and HERE for the two different approaches McDonnell used on the F3H Demon, for example. These proved to be inadequate, particularly on a wet, windy flight deck.

The Douglas A4D Skyhawk appears to have been the first exception to the self-boarding requirement, justified by Ed Heinemann's focus on weight reduction and the degree of difficulty involved in providing a self-contained boarding capability for it. The bespoke ladder was equipped with a tube that inserted into a hole in the left side of the fuselage. Wheels on the bottom of the side frames of the ladder minimized the loads on the mounting structure. 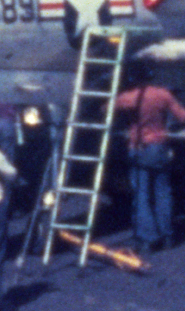 Boarding ladders were subsequently provided for the F3H and F7U although the self-boarding "feature" was retained. The XF4D self-boarding capability was removed for production and a ladder similar to the A4D's provided by Douglas for it. However, there were few exceptions made to the requirement— or provision of boarding ladders as GSE—after these aircraft were retired. (The North American A3J/A-5 Vigilante was one.)

Since a ladder was not always available, particularly for an urgent dismount, some Skyhawk pilots occasionally used the inflight refueling probe installation on the right side of the fuselage to exit the cockpit and move aft around the inlet to the wing and then jump off the trailing edge. 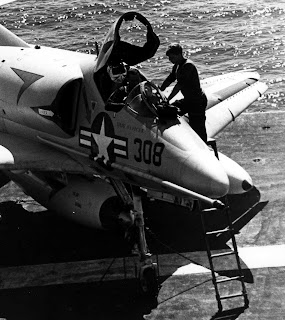 The more surefooted and athletic would go forward and execute a high bar dismount. (In the midst of the Forrestal fire, with his A-4's ladder having been removed, John McCain simply got out onto his probe, went forward on it, and jumped off.) Former gymnastics reportedly even gained access to the cockpit by muscling up on the probe.

With the introduction of the A4D-5 and the strakes forward and below the engine inlets, the degree of difficulty of self-boarding was somewhat reduced and became more common, particularly if malcontent sailors had tossed all the boarding ladders overboard as happened on at least one deployment. It helped if you were flexible and had long legs (but not too long because of the size of the Skyhawk's cockpit) like young T.J. (Jeff) Brown pictured here. 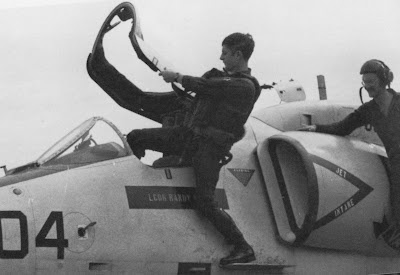 Douglas provided a self-boarding capability for the Blue Angel A-4s that consisted of a very narrow folding ladder stowed in a tube extending from the 20mm gun port in the left wing root. 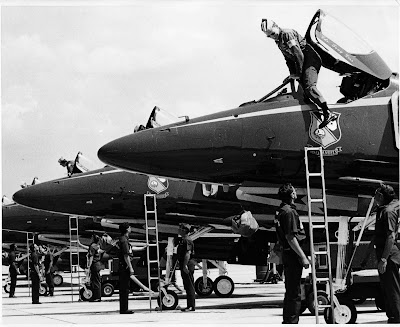 The two-seat TA-4s had a ladder with a stepped platform that provided access to both the front and rear cockpits. 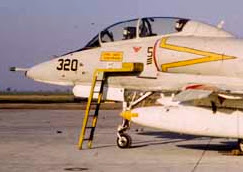 The TA-4s used for training were much more likely to fly into airfields that didn't have appropriate ladders for ingress and egress. As a result, some squadrons formally condoned and marginally improved the use of the strakes and the cover over the IFR pipe by treating them with a skid-resistant coating on them, as well as on the aft end of the external tanks and a wing walkway as shown here in a picture provided by Rick Burgess: 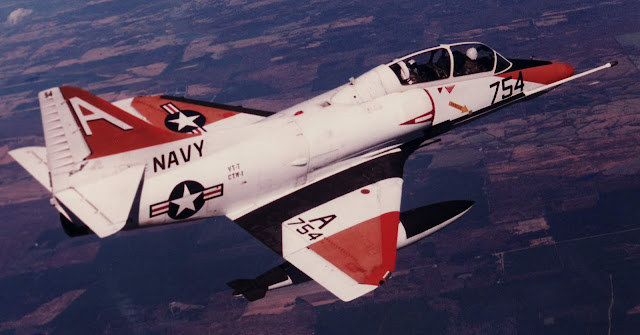 The front seater used one of the fins on the right external tank to get up on the wing and then went forward around the inlet to the strake and thence along the refueling boom. The guy in the back seat could enter and exit from either side using the strake. 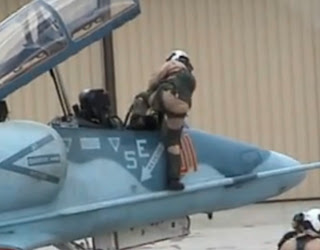 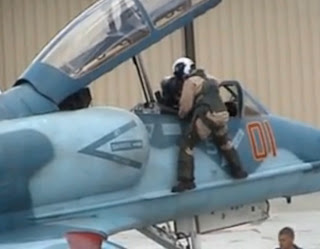 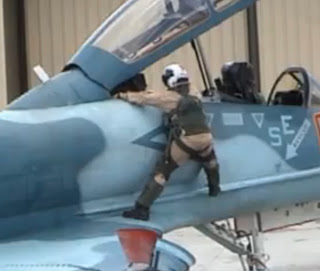 A video of this egress is on Youtube: HERE
Posted by Tailspin at 7:07 PM 5 comments:

As I said, I'm very pleased with the publication quality of my history of the A-4 Skyhawk, Scooter!, which should be shipping from Amazon, among others, in a couple of weeks. One small disappointment, however, was the reproduction of the picture of Capt Pablo Carballo and Lt Carlos Rinke's attack on Broadsword on 25 May 1982. It wasn't a very high resolution picture to begin with and this regrettably resulted in it being too small in the book to provide the impression that I wanted to convey. Here it is as big as I can make it (click on it for a larger size) and annotated as well: 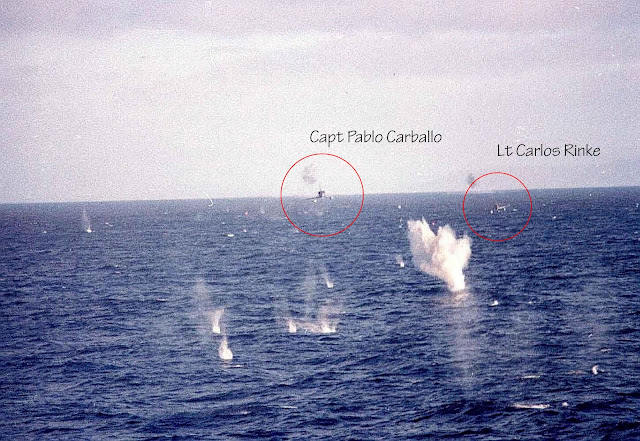 Both Carballo and Rinke survived the attack (as did Broadsword), reportedly because the Sea Wolf missile system could not choose between their A-4s in the short time that they could be engaged.

Noted Argentinian aviation and maritime artist and illustrator Carlos A. Garcia created the following painting of the action, The Volcanos, based on this picture and interviews with Capt Carballo: 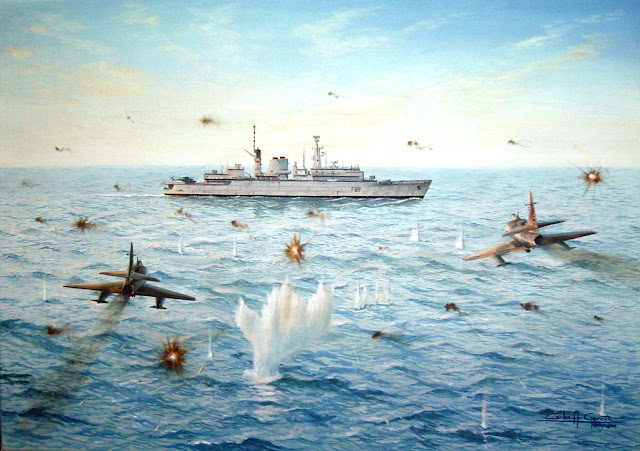 More of Senor Garcia's work can be seen at his website, http://www.aviationart.com.ar/Carlos_Adrian_Garcia_eng/Welcome.html.
Posted by Tailspin at 2:49 PM 2 comments: