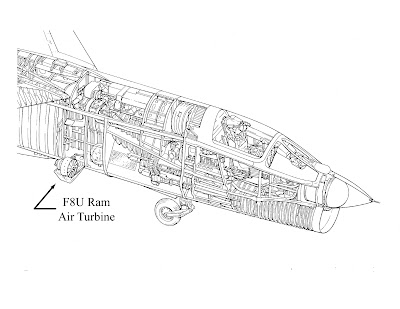 Aircraft manufacturers tried in vain to avoid the weight and complexity of hydraulic control systems. Some also tried to provide a manual backup, such as an extendable control stick to allow the pilot to contend with the loads. The F7U-1 Cutlass had a complex system with an automatic switch over to manual control via spring-loaded tabs on the ailevators. This proved troublesome and at least one pilot was killed as a result of an unnecessary and ineffective switch. As a result, the production F7U-3 wound up with four hydraulic pumps for the flight controls.

Eventually, the fallback for a hydraulic pump or engine failure on most aircraft was the Ram Air Turbine or RAT, which was extended into and turned by the air stream to provide hydraulic (and/or electric) power. These were released by unlatching an uplock, so no hydraulic or electric power was required to bring them into play.

The F8U RAT was unusual in that it had large number of blades of high activity factor and the fan was shrouded.  Most RATs now have only two blades and are not shrouded. This picture of an RF-8 with the RAT extended was taken by Joe Youngerman at the National Air and Space Museum. 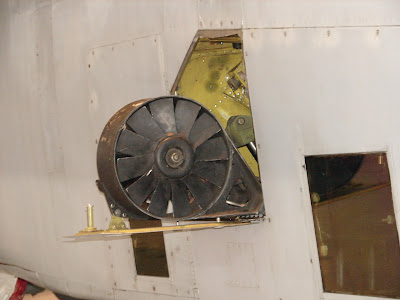 Posted by Tailspin at 9:25 AM No comments:

It Seemed Like a Good Idea at the Time 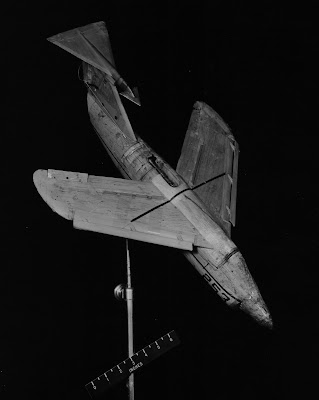 As jet airplanes flew faster, hydraulic assist on the pitch and roll control surfaces became necessary. Since this added weight and complexity, Grumman tried to avoid a powered control system in the design of the XF10F.  The horizontal tail was positioned by much smaller version of the tail which the pilot controlled directly without any hydraulic assist. Roll control was accomplished by lift-spoiling tabs that rose vertically out of the wing, with some additional control and the requisite "feel" provided by small ailerons. Unfortunately, neither pitch nor roll control approach was successful, with the lag in pitch control making the aircraft all but unflyable.
In this picture of the spin test model, the small tail surface is pointed down, which forced the leading edge of the big tail surface down, leading to the stall that would precede a spin with the rudder, ailerons, and right wing spoiler tabs positioned as shown here. (The leading edge wing slats are shown out since they extended aerodynamically as the airplane approached a stall.)
Posted by Tailspin at 12:33 AM No comments:

Not As Easy As It Looks 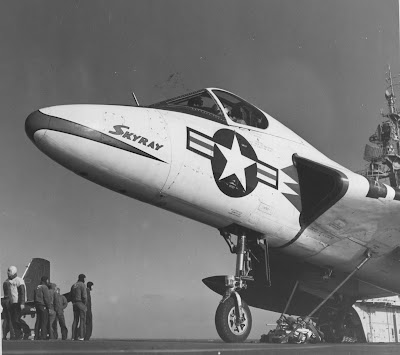 Or more precisely, not as comfortable. The combination of the mechanics of the hydraulic catapult and the geometry of the catapult bridle hookup resulted in a very uncomfortable launch for the Douglas F4D Skyray pilot.

The hydraulic catapult was a piston mounted crosswise (athartships) and aft of the start of the catapult track. It pulled on a long cable, which was turned by pulleys, first to go from sideways to forward and up, and then at the front of the track to go back to the launch point, where it was connected to the catapult shuttle, which was the shoe that extended above the deck to which the bridle was attached.
As a result, when the catapult was "fired", no matter that the shuttle had been tensioned against the holdback, there was some elasticity in the cable/pulley system such that its initial acceleration was even more sudden than the hydraulic piston's initial movement, what engineers would call a snatch load.
To compound this effect, the F4D's bridle pulled the nose down at the onset of the snatch since it was acting along a line quite a bit ahead of the aircraft's center of gravity. The nose gear shock strut was first compressed so it almost bottomed, and then as the snatch load fell off, rebounded to cause a noseup pitch. This happened so fast that there was enough time for at least one more violent oscillation before the Skyray reached the end of the catapult stroke.
The effect on the aviator was disconcerting to say the least, particularly at night. Imagine getting hit in the head with a baseball bat, twice, and then having to regain your wits and start flying, on instruments. However, based on the very low incidence of launch accidents, it wasn't so bad that they couldn't cope. Nevertheless, the steam catapult, with its more gradual onset of motion, was a welcome relief.
Posted by Tailspin at 11:42 AM No comments: