While in the process of preparing a set of notes and illustrations about the F4U-4 configuration changes, I was somewhat surprised to find that the cannon-armed variant was designated both F4U-4B, the one I am familiar with, and F4U-4C, which didn't ring a bell right away other than C has been taken to mean a modification to add cannon armament, as in F4U-1C, SB2C -1C, and as it turns out, F8F-1C. My first thought was that the F4U-4C designation might be bogus until I discovered this photograph of BuNo 97448 in my files. It is clearly cannon-armed and almost certainly fresh off the Vought production line at Stratford, CT. 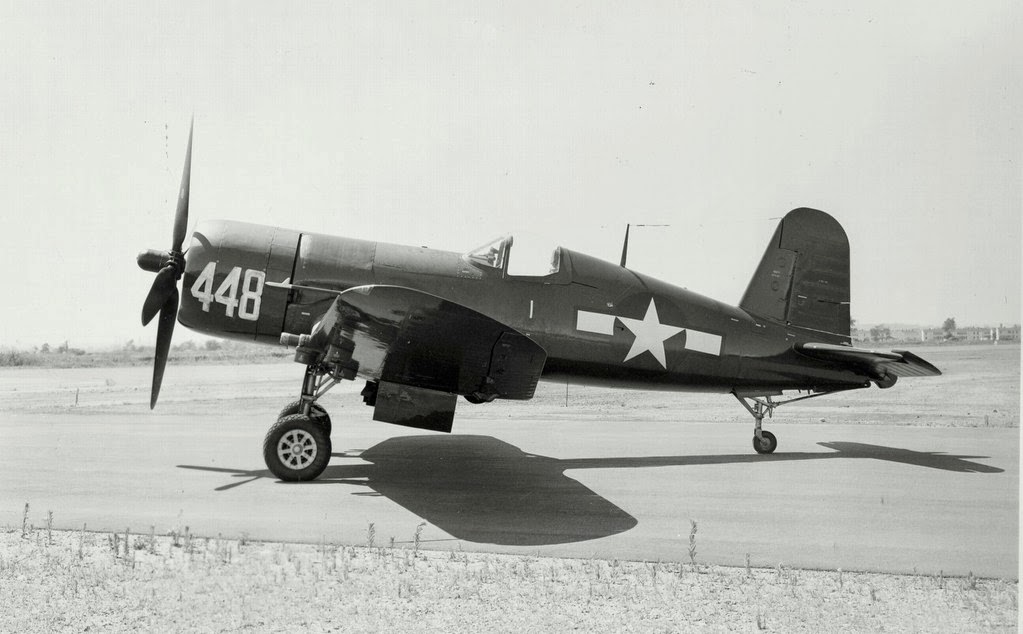 This is a closeup of the markings on the vertical fin; you may have to take my word for it, but F4U-4C is marked on the rudder:

I have written about the confusing conflation of Navy designation suffix meanings used during different time periods (see http://thanlont.blogspot.com/2013/06/navy-aircraft-designation-suffixes.html). Basically, the meaning of a letter not only changed over time but should be separated into two categories, a specific added/changed capability (C for cannon armament) and a simple revision letter (C as the third minor change but one worthy of differentiating the airplane from its predecessors). Actually, I argued that C, at least early in the war, was used for the first notable change because the suffixes A and B were reserved at the time for a Navy airplane delivered to the U.S. Army and one delivered to Britain, respectively.

As it turns out, the use of suffixes by BuAer and its airplane manufacturers during the war was not well regulated and more specifically, there was no published definition for suffixes C or D as there came to be over time for A, B, E, F (briefly and replaced in effect by Z), H (except for the PBJ-1H), N,  P, R, and S. After the war, in January 1946, definitions were added for the suffixes J, K, L, Q and W.

In March 1946, however, BuAer decreed in Aviation Circular Letter 43-46 that henceforth—among other additions, deletions, and changes—that the suffix B would be used for "Special armament version" and C for "Carrier operating version of a non-carrier aircraft". In the case of the cannon-armed F4U-4C and the F8F-1C, the change was made retroactive so they became the better-known F4U-4B and F8F-1B. In the case of the F4U-4B, at least, speculation resulted decades later that these were Corsairs destined for Britain but taken by the U.S. Navy instead (or in one account on the interweb, dumped at sea by the Brits in lieu of expending the cost to return them to the U.S. after the war in compliance with the terms of use).

This suffix history is described in full in a draft monograph apparently prepared by the history section at BuAer in May 1955. See http://www.alternatewars.com/SAC/Use_of_Suffix_Letters_in_Model_Designation_of_Naval_Aircraft_-_May_1955_Monograph.pdf
Posted by Tailspin at 3:51 PM No comments: