For a summary description of this Lockheed P2V's record distance flight, see http://thanlont.blogspot.com/2011/01/truculent-turtle.html

I knew the overloaded takeoff from Perth, Australia was a close-run thing, but I just came across this video recently posted by Ken Horner:

Note that for maximum takeoff benefit from JATO, you fire the rockets so that burnout occurs just after liftoff. That is why there is no JATO boost during the first part of the takeoff roll.

In the event of an engine failure at or above 1,000 feet after takeoff, the crew had a fuel-jettison plan (including getting rid of the tip tanks) to get down to a weight that would allow them to climb before they hit the ground. It doesn't look like they got to 1,000 feet for a while...

Posted by Tailspin at 9:55 AM No comments:

How Hard is It to Land on an Aircraft Carrier?

I was recently asked "How hard is it to land on an aircraft carrier?" I regret to say that I don't know personally. My only pilot experience in that regard is making an approach and landing a Lockheed S-3 in a Navy flight simulator. My only actual carrier landing was as self-loading freight facing backwards in the cabin of a Grumman C-2 Greyhound transport. (I can say in that case there was an unsettling amount of flight control activity and throttle changes on short final before a very firm arrival and impressively short stop.)

However, I have a lot of second-hand knowledge based on reading books/articles, an overnight stay on an aircraft carrier being used for day and night carrier qualifications, listening to naval aviators, etc. The degree of difficulty also depends on the era. In the beginning, landing speeds were much slower and crashes less dramatic, at least as far as the pilots were concerned. As airplanes got bigger and heavier, higher landing speeds were required and crashes became much more colorful. The introduction of jets reached the upper limit of practicality and the Navy was in danger of exceeding it. 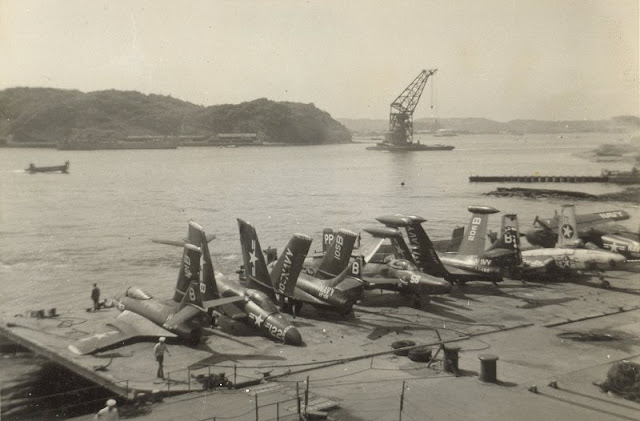 The angled deck and the mirror-landing concept were adopted just in time to restore a reasonable amount of repeatability to the landing process. (The fact that carriers were getting bigger and bigger was also beneficial.) The latest automated landing systems now being qualified promise to make the carrier landing a non-event, the equivalent of the self-driving car.

For the time being, however, a carrier landing requires a high degree of precision with potentially fatal consequences for getting it wrong, similar to a high-wire circus act without a net or safety harness. The precision required is akin to flying under a low bridge, a high-risk and foolhardy maneuver. Hitting the bridge, its supports on either side, or the water is likely to be fatal.

The penalty for being too high in the event of a carrier landing is not fatal but means not being able to land on that approach. Another is required, prolonging the time the carrier has to spend on that course and potentially delaying the subsequent launch cycle.

Being a bit too far off to the left or right on a carrier landing is almost as bad as hitting the bridge supports. It risks a crash into parked airplanes on either side of the landing area and/or going off the deck into the water. 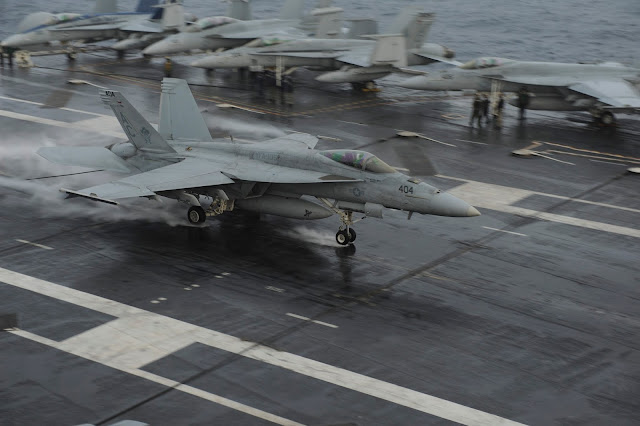 Being too low is the worst, resulting in a ramp strike. A bit too low might just mean damaging the tail hook, which requires a diversion to a shore base or a landing on the carrier using the barricade which again disrupts carrier operations. Hitting the ramp with the airplane itself is frequently fatal. 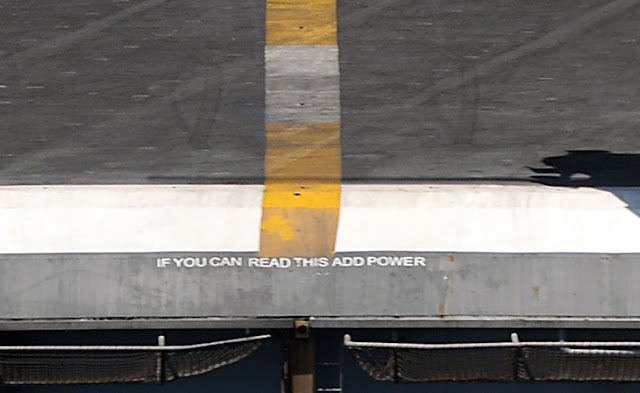 How big is the opening? About 20 feet by 20 feet. The target height for the end of the tail hook at the target angle of descent is about 14 feet above the ramp. Being only four feet or so higher means missing the last wire and having to take off again, a bolter.

The width of the opening is constrained by the imperative to keep either wingtip safely distant from the "foul line" that other airplanes and equipment are kept behind. In other words, the naval aviator can touch down as much as 10 feet on either side of the center line as long as the sideward drift, if any, is toward the center line and not away from it.

However, simple passing through the imaginary opening about 20 feet high and 20 feet wide is not sufficient. At that instant the airplane must also be traveling at the target airspeed and with the target rate of descent so as to put the tailhook on the deck between the second and third wires. Being too fast or at too shallow a rate of descent means touching down beyond the last of the four wires and boltering; too high a rate of descent, while insuring that the hook touches the deck before the last wire, risks exceeding the strength of the landing gear.

The resulting ejection was successful. 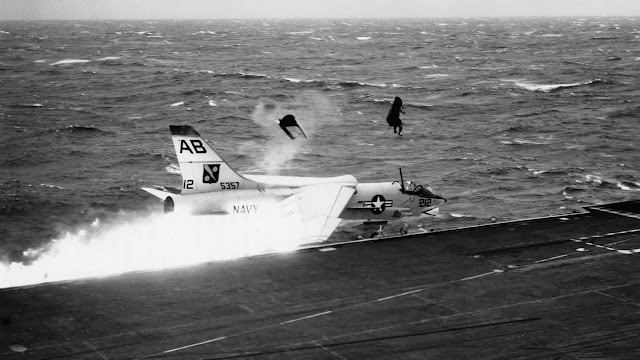 It helps that the target rate of descent, while high—about eight knots or nine miles per hour—is not much more than one third of the demonstrated capability of the landing gear. Landing gear strength is one of several differentiators between airplanes designed for carrier operations versus those that fly from airfields. The stronger landing gear means that the naval aviator does not have to, in fact should not, flare to decrease the rate of descent as part of the landing because not flaring increases touchdown accuracy.

It doesn't help that a lot of time is not allowed to get lined up with the opening and stabilized at the target airspeed and rate of descent. There is often a compelling reason to get all the airplanes aboard in as short a time as possible (for one thing, the carrier has to be headed into the wind for landings and that may very well not be the direction that the battle group needs to go). As a result, the time allotted for the final approach is on 15 to 18 seconds in daytime.

Moreover, unlike an opening under a bridge, the one that the naval aviator must pass through is moving. Even the biggest carriers are affected by stormy or ocean-swell conditions: depending on the sea state, a carrier can move in six different ways—pitch, roll, yaw, heave, sway, and surge—in various combinations. Although the ship movement isn’t quite random, it is not really predictable either. The current big-deck carriers, at least, don’t move quite as much as the smaller ones did. 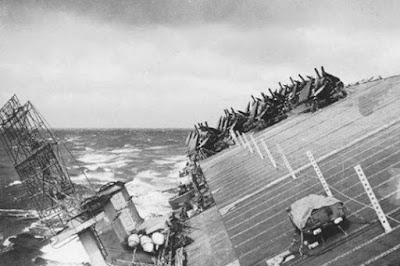 The rate of change of a big-deck carrier from one extreme to another is also usually relatively slow. Nevertheless, under certain sea conditions, the ramp can move about 20 feet, the height of the imaginary opening, or more in only 10 seconds.

There is also the added degree of difficulty of having to fly "under the bridge" at night from time to time, with only a few lights as guidance as to the location of the opening. As a result, the final approach is then lengthened to about 25 seconds.

Although the naval aviator is alone in the cockpit, he or she is assisted by the advice and counsel of a Landing Signal Officer (LSO) standing on the deck who monitors the approach and can often detect an unacceptable trend developing with it or with carrier motion before the aviator does. The LSO's command to abandon the attempt, a wave off, must be complied with. 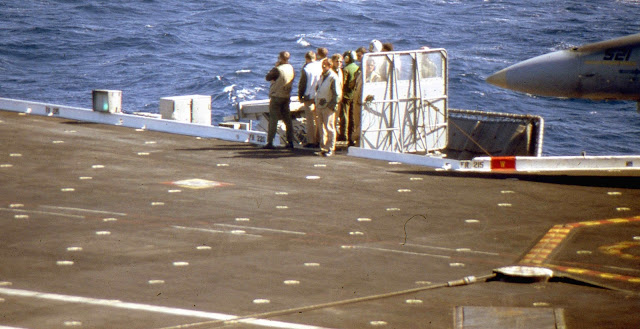 Tom Wolf in his book, The Right Stuff, observed that test pilots and race car drivers are not preternaturally brave or foolhardy but instead have convinced themselves that they have the skill and knowledge to not crash as opposed to those who have. Prospective naval aviators go through a training program that is designed to instill that level of confidence in them. It also ruthlessly eliminates individuals potentially inadequate to the task. (For more on this, see my book, Training the Right Stuff, HERE.)

The naval aviator prowess at carrier landing continues to be closely monitored during his career by the LSOs, squadron commanders, and the Carrier Wing Commander for poor performance at sea. The result is a very low crash and casualty rate in what is widely regarded as the most demanding aviator skill, the carrier landing.
Posted by Tailspin at 10:09 PM 1 comment:

See http://thanlont.blogspot.com/2012/05/navy-joint-fighter-conference-october.html
for added information (scroll down).
Posted by Tailspin at 10:40 AM No comments: