While looking for something else, I discovered that the Centennial of Naval Aviation newsletters issued beginning in 2009 to publicize the year-long event in 2011 are still available online: 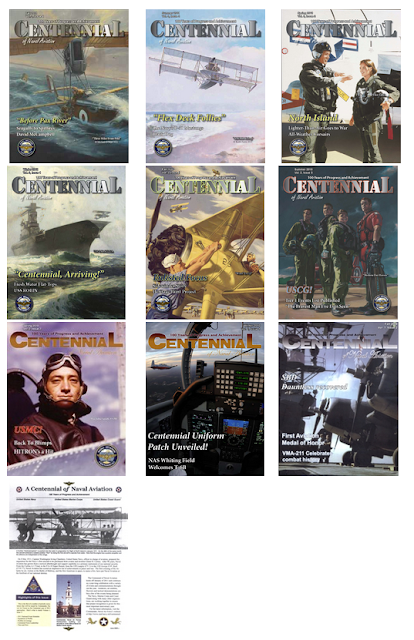 These contain interesting articles of events both historic and then-current. They can be downloaded at: http://www.public.navy.mil/AIRFOR/centennial/Pages/Multimedia.aspx
Posted by Tailspin at 9:08 PM No comments:

In the process of doing some research for another author on the North American FJ-1 Fury, I had a senior moment that I documented with this post, which I have now corrected. My apologies.

VF-5A was equipped with FJ-1s before NATC finished its evaluation of the type. The urgency to get jets aboard carriers resulted in an unusual clearance direct from the Chief of Naval Operations in February 1948, He issued authorization for the squadron to conduct limited at-sea operations "to expedite carrier operation jet aircraft prior (to the) completion (of) all customary trials." Restrictions included no catapult takeoffs, limited gross weights, no tip tanks, and keeping "vertical impact velocities at a minimum". It advised that at the maximum approved takeoff gross weight of 11,600 lbs, a takeoff run with 35 knots wind-over-deck would be 840 feet on a "hot" day and 680 feet on a standard day (59° F), "based on test results obtained with experienced pilots under optimum conditions". Note that an Essex-class carrier deck was 862 feet long.

On 10 March 1948, with those restrictions, guidance, and permission in hand, VF-5A squadron commander CDR "Pete" Aurand and his executive officer, LCDR Bob Elder, made the first carrier takeoffs and landings by a more or less operational jet squadron from Boxer, CV-21. Life magazine photographers were aboard and aloft to capture the event. Landings were relatively easy, with notably better visibility of the deck than in a prop plane. Deck-run takeoffs were dicey and begun using all the available deck. 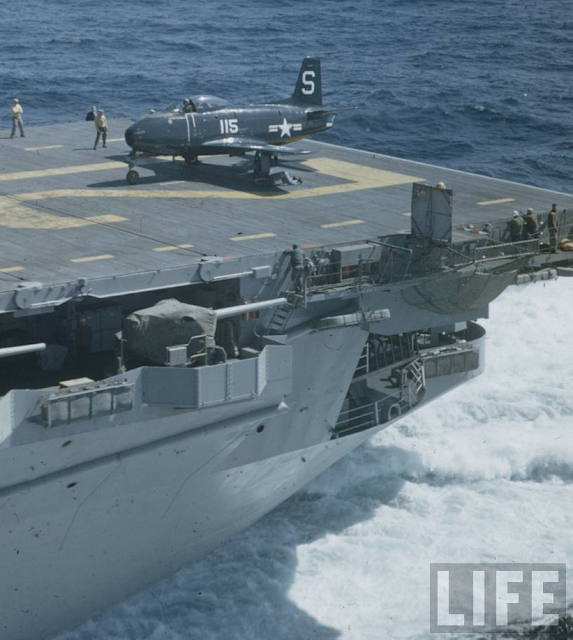 During this outing or outings, either the NATC restriction on catapult takeoffs had been lifted or Aurand made a command decision to be catapulted off rather than make deck runs for some of the takeoffs. 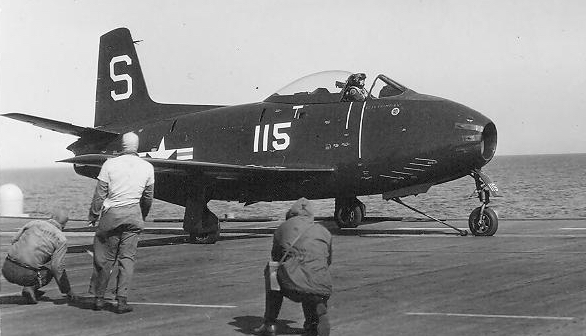 Based on his and Elder's successful evaluation, Aurand attempted to get all the VF-5A (now VF-51) pilots qualified for carrier operations beginning on 3 May 1948 aboard Princeton. It did not go well. A wing broke off the fourth Fury to land; the wing stayed on deck but the rest of the airplane went over the side (the pilot was rescued). There were too many trips into the barriers, some resulting in damage that precluded continuing without significant repair. The week-long qualification period was reportedly terminated after only two days by the ship's captain. The crippled Furys were craned off at San Diego.

If this was an attempt to claim bragging rights as the first Navy squadron to carrier qualify in jets, it was a failure. On the east coast, VF-17A—flying McDonnell FH-1 Phantoms from the smaller Saipan, CVL-48—was making their first carrier takeoffs and landings, perhaps a few hours before VF-5A began qualification as a squadron but possibly a day or so later. Moreover, VF-17A experienced no incidents, flying as many airplanes off the carrier as they had craned aboard on 1 May and qualified all their pilots. Tragically, the success was marred by a fatal mid-air collision between the commanding officer, CDR Ralph A. Fuoss, and his wing man upon return to NAS Quonset Point. For more, see Squadron Takes Jets to Sea

It is not clear when NATC's formal at-sea FJ-1 carrier-suitability trials were accomplished. I'm all but certain that it was aboard Princeton with these two jets with photo-reference markings. One carried a large "A" on the forward fuselage (BuNo 123066) and the other, a "B" (BuNo 120369). 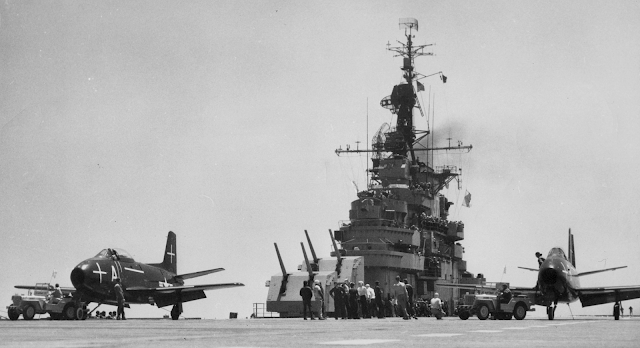 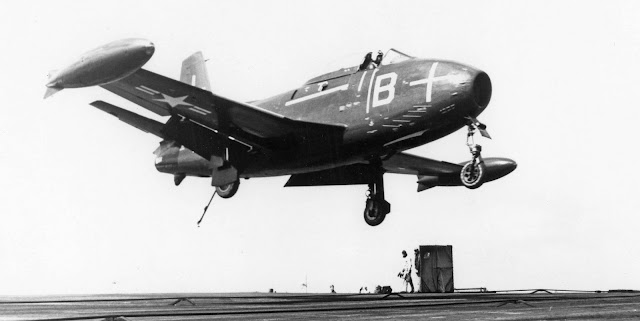 Based on a note to myself from research several years ago at the Washington Navy Yard, I'm pretty sure that it occurred in August 1948 on the west coast after appropriate beef-ups and modifications were made to the Fury, determined to be required by Aurand's premature attempt to carrier qualify VF-5A. My notes indicate that one of them, "A" , suffered a hard landing with a structural wing failure; however, an excellent picture of BuNo 120366 provided by Rob Eisenberg (his father William was one of the photographers aboard for the trials) indicates that it was stopped by the Davis barrier, which resulted in a nose gear collapse and significant damage to the underside of the nose. The tail hook does not appear to present, which suggests that it may have become detached during the landing. Nevertheless, these trials cleared VF-5A, then designated VF-51, to go back aboard a carrier and qualify as a squadron, which they did in September.

VF-51 provided jet familiarization in squadron strength with their FJ-1s for at least three west-coast carriers before transitioning to the Grumman F9F-3 in 1949.

Kneeling - it seemed like a good idea at the time. The U.S. Navy's first carrier-based jet, the McDonnell F2D-1/F2H-1 Phantom, had conventional folding wings to maximize the number that could be parked on deck or in the carrier's hangar. 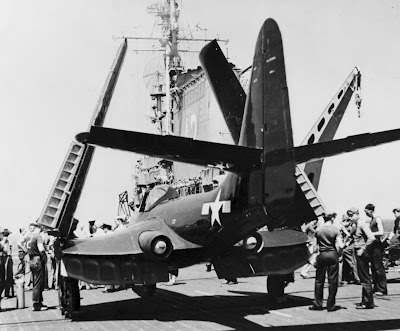 At some point (and this is not an April Fools joke), possibly suggested by Grumman as shown in one of their brochures, the concept of kneeling gained favor: A "parking dolly" would be inserted under the nose and the nose landing gear retracted so the tail was raised.

Once the pilot had taxied out of the pack while kneeled, the nose gear would be lowered and the parking dolly removed.

The primary benefit was to direct the hot and powerful jet exhaust above airplanes and deck crew. According to the Grumman brochure, there were other benefits as well. 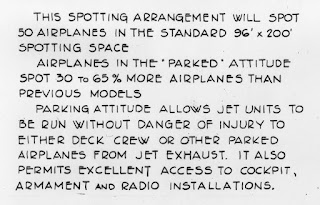 It also made deck parking compact enough that wing folding was not absolutely necessary, reducing structure and system complexity and eliminating the weight, cost, and maintenance burden of that feature.

The Bureau of Aeronautics liked the idea so much that it was a requirement for the next round of Navy carrier-based jets. Ironically, Grumman didn't receive a contract.

The North American FJ-1 Fury's approach was to stick the "kneeling dolly" into a socket in upper strut of the nose landing gear after opening an access door in the forward-facing nose gear door. 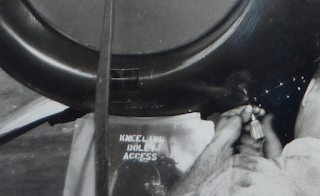 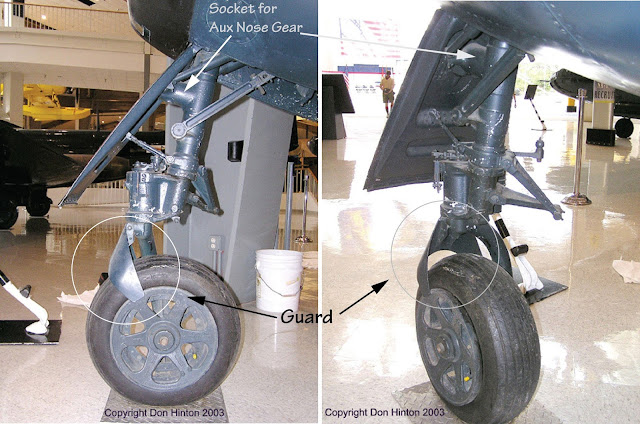 I'm not sure what the "guard" was for. It is too flimsy for protection from the arresting gear cables. My guess is that it was to keep the nose wheel from hanging up on something in the wheel well as it pivoted and unpivoted to lay flat. In any event, it appears to have been added after the surviving FJ-1s were assigned to the reserves.

The nose gear was then retracted using a hand pump. 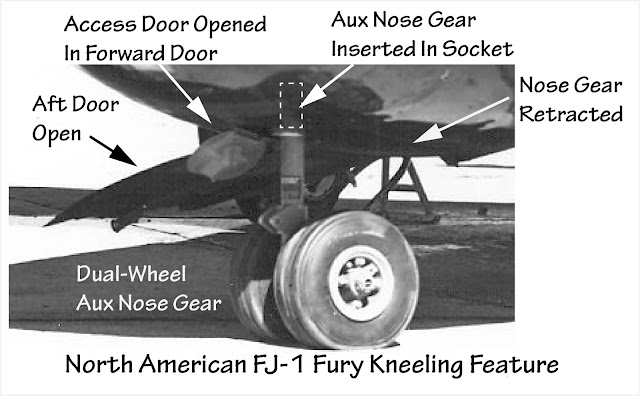 The Vought F6U Pirate's "Nose Parking Wheel" was inserted into a socket on the bottom of the nose just forward of the nose wheel well. 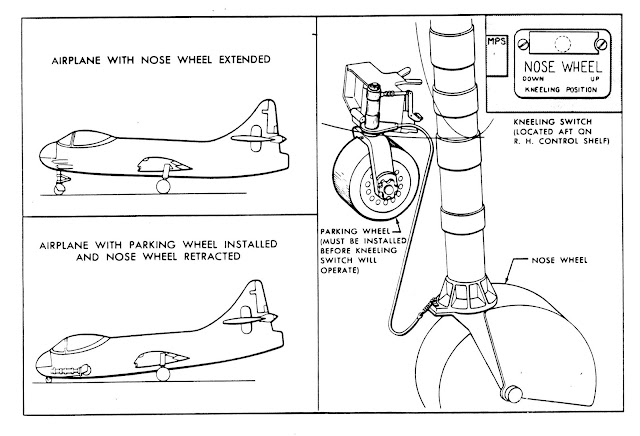 Indicative that the primary purpose of kneeling was the redirection of the jet exhaust, kneeling was also required on the McDonnell F2H Banshee procured in the second group of carrier-based jets even though its wings folded, unlike those of the FJ-1 Fury and the F6U Pirate. 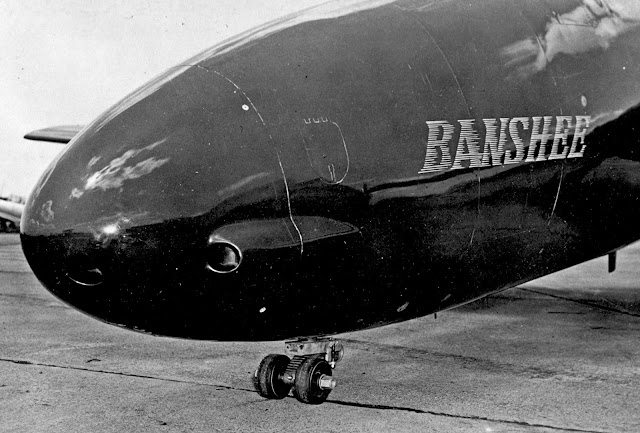 Vought considered partially retracting the nose gear to kneel its Model 346A, which became the F7U-1 Cutlass, but decided that since it was tailless, overlapping its nose over the wing of the airplane in front was adequate.

The Banshee's kneeling capability continued in production for a while, as evidenced by this F2H-2N photo.

However, kneeling appears to have rarely, if ever, been utilized operationally and was not required of the next generation of carrier-based jets, including the Grumman F9F Panther.