It's surprising how often something new shows up for something old. I wrote about approach lights here: http://thanlont.blogspot.com/2012/04/night-carrier-landings-in-beginning.html

It was just brought to my attention that the F-4 had a green light on the left side of the fuselage that the LSO could use at night to determine roll attitude when he could not see the position light on the right wingtip, e.g. if the Phantom was turning left for lineup. It can be seen in this picture just below the crossbar in the A in NAVY. It looks like it is at the same waterline as the left-wingtip position light. I'm surprised that it is flush rather than protruding like a similar one is on the E-2.

The picture is cropped from a walkaround by Howard Mason of an F-4J on the Prime Portal website here: http://www.primeportal.net/hangar/howard_mason/f-4j_155563/

Posted by Tailspin at 9:25 PM No comments:

And Now for Something Completely Different

While doing research for my book on the development of U.S. Navy carrier-based jet fighters, I came across a cryptic reference to a proposed rocket-propelled interceptor. 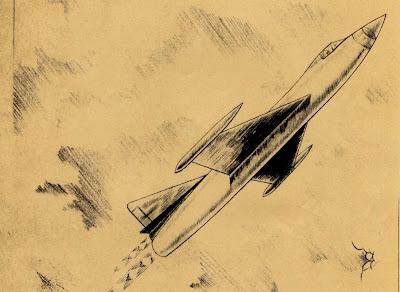 I dismissed it out of hand although the Germans had not. In World War II, they developed the cannon-armed Me 163 interceptor that was rocket powered and had very high performance. One of the first aviation books that I remember reading as a preteen was Rocket Fighter by Mano Ziegler, a WW II Luftwaffe pilot who flew it.  Although legend has it that the Komet was more dangerous for its pilot than the B-17 crews that he was attacking, it was reportedly easy to fly and phenomenally fast for the time. The main problem was its fuel, C-Stoff (57% methanol/ 30% hydrazine/ 13% water), and oxidizer, T-Stoff (80% concentrated hydrogen peroxide / 20% oxoyquinoline. The combination was hypergolic, meaning it ignited just from being mixed, without the need for an ignition source. The Germans developed a process for safely fueling the Komet but a crash on takeoff or landing (particularly from the rough-and-ready fields available) was likely to result in an explosion or fire.

It turns out that the rocket-propelled interceptor proposal was a paper dated 8 June 1950 that was written by a U.S Navy officer, Commander Robert C. Truax, who was also literally a rocket scientist. It was a summary description and analysis promoting the development of a destroyer-based, rocket-powered interceptor.  In this case, furfural alcohol was the fuel and  nitric acid was the oxidizer. A small engine was provided for services and cruise;  a much larger one provided the thrust and control for vertical takeoff and acceleration. 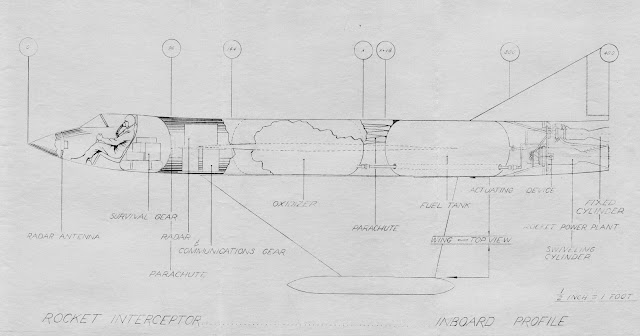 In Truax's mission scenario, the interceptor would be launched vertically from the fantail of a picket ship, in this case a Gearing-class destroyer that would carry five of the aircraft. 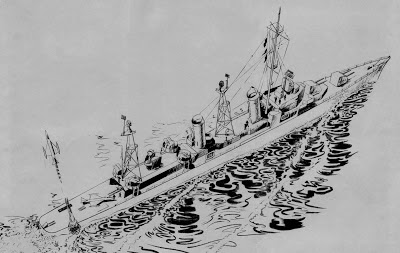 After a flight profile measured in minutes, it would descend by parachute to the sea, from which it would be recovered to be prepared for its next mission. 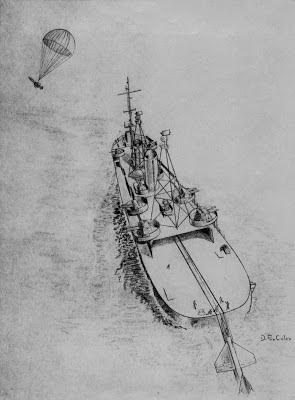 The range depended on the profile flown, ranging from zero ballistic (70 nm) to full ballistic (150 nm). Top speed was about Mach 4.

(Note that the full ballistic profile meant a recovery about 80 nautical miles from the launch point for a straight-out mission.)

An AN/APS-25 radar was to be used to locate and navigate toward the incoming bombers. 1,500 lbs of the 13,000 lbs gross weight was allocated to the weapons, which were yet to be defined. Aerial mines detonated by proximity fuses were one possibility. 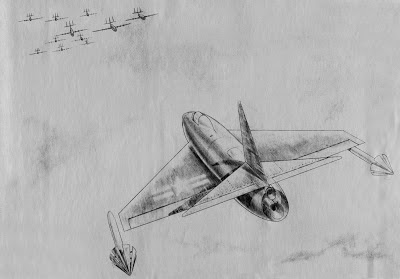 In his paper, Truax noted that significant experience had been gained since the war with liquid-fuel rockets, including over 200 flights of the Bell X-1 with a rocket as its sole power plant. The Douglas D-558-2 was about to fly with a rocket engine. The smaller rocket engine in his design was one in development under contract to the Navy.

Although far-fetched, Truax's proposition received formal consideration at the Navy’s Bureau of Aeronautics and garnered at least one letter of support. However, even if the Korean War hadn’t become a distraction shortly thereafter, it seems very unlikely that the Navy would have taken any action on his rocket-powered interceptor after BuAer's review.

Truax retired from the Navy in 1959 as a Captain and went on to a career at Aerojet, after which he founded his own company, Truax Engineering. Among other things, he designed the Skycycle X-2 for Evel Knievel’s Grand Canyon jump. For more on Truax, see http://en.wikipedia.org/wiki/Robert_Truax .
Posted by Tailspin at 2:49 PM 3 comments:

My long overdue monograph on the F7U-1 Cutlass for Steve Ginter's Naval Fighters series is finally done and at the printer. 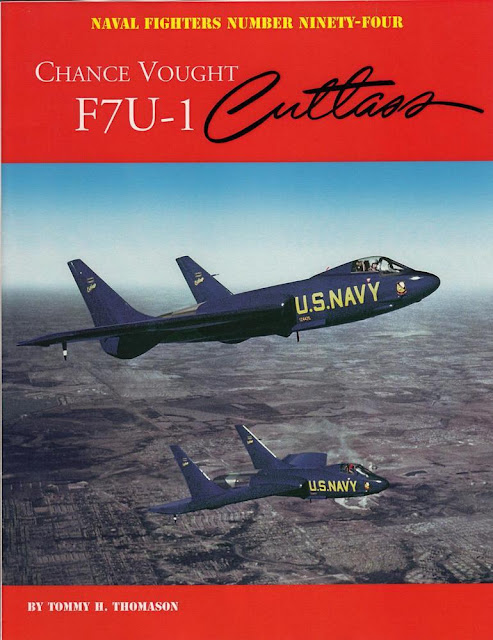 It is available from Amazon: http://www.amazon.com/dp/0984611479 , Sprue Brothers, Specialty Press, and Steve Ginter himself (http://www.ginterbooks.com/NAVAL/NAVAL.htm).

I guarantee that it has pictures and illustrations that you haven't seen before.

The F7U-1 was ahead of its time in many ways.

Rogue markings were indicative of much more audacious decisions that resulted in F7U-1 development falling well behind schedule and the production program being terminated. I hope you agree that I've done its story justice.
Posted by Tailspin at 1:02 PM 2 comments:

Waving Them Aboard - The LSO

I did a very brief summary of Landing Signal Officer (LSO) history and responsibility here: http://thanlont.blogspot.com/2009/05/waving-them-aboard.html  This is an expanded discussion that is limited to landings on axial-deck carriers.

The LSO was a very early innovation in the development of aircraft carrier operations. He stood on a platform on the aft port side of the ship and visually coached the pilot of the approaching airplane into position for a successful landing or directed him to go around for another try.

According to legend, the first LSO was CDR Ken Whiting, the executive officer of Langley, the U.S. Navy's first aircraft carrier. He reportedly watched many of the first landings from what would become the LSO position and eventually grabbed two white sailor's hats to make his corrections more visible. Standardized signals and the creation of the LSO's paddles followed in short order. 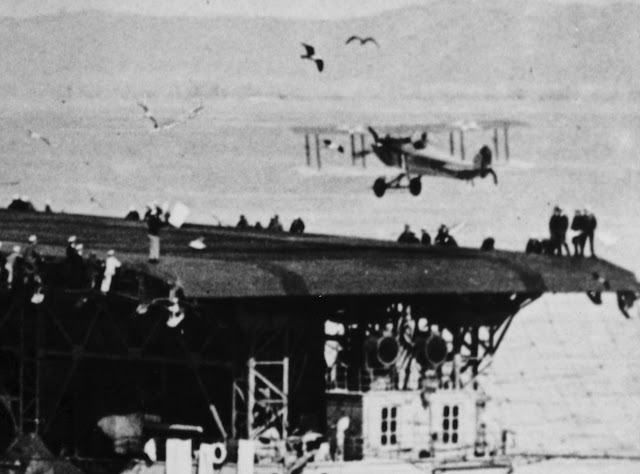 To land on an axial deck carrier, the U.S. Navy pilots approached as for a short field landing, "dragging" the airplane in a speed just above stall and a constant altitude only about 20 to 30 feet (wheel height) above the deck. Upon receiving the "cut" signal from the LSO, the pilot closed the throttle, which resulted in an immediate descent onto the deck in the midst of the landing wires.

The pilot first had to get to the start of the "groove", which was where the LSO's coaching began. At the risk of oversimplifying, the groove began a few hundred yards (less for propeller-driven airplanes) behind the ship, where the pilot had completed his turn from his base leg and was lined up and on speed at approach altitude in level flight. At this point, the LSO's signals were visible and he began coaching the pilot as to height, airspeed, and line up in that order of priority. Those signals were advisory in nature relative to the two mandatory ones, which were the cut and the waveoff. Given the speed of the aircraft, there was only a few seconds for coaching and correcting before the LSO had to give the pilot either the cut or the waveoff signal. These were the basic signals: 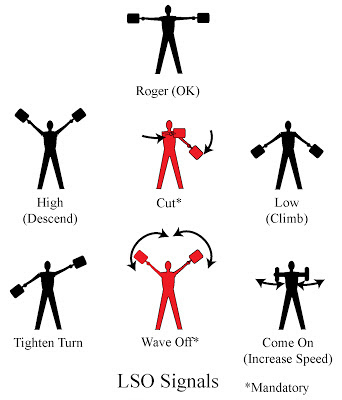 There were several more, as illustrated in this article from Naval Aviation News in 1945: 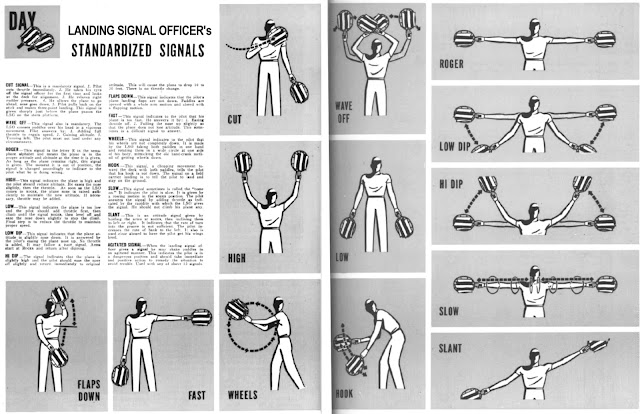 Note that these were the "Day" signals. I haven't yet found a description of the corresponding "Night" signals.

The "slant" or "tighten turn" were used to coach the pilot as to line up, since—particularly with the F4U Corsair—the groove might well begin while the pilot was still turning to line up with the carrier. If the LSO thought that the pilot was in the process of making a good approach, he might therefore be given a Roger signal even while in the turn.

A wave off wasn't necessarily indicative of a poor approach. In order to bring all the airplanes in as quickly as possible, the interval between them left little margin for a problem getting one out of the landing area. A wave off might therefore result from a foul deck. 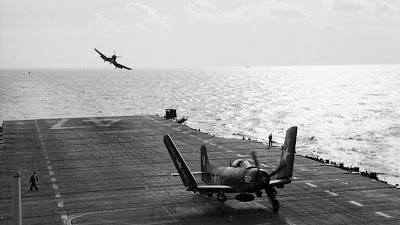 The LSO might also realize that the deck movement, which he could feel before the pilot could see it, was out of sync with the airplane's ability to settle into the landing area without being long (deck descending) or  touching down too hard (deck rising).

There were also variations in the LSO signals, possibly unofficial and specific to an Air Group. For example, these are the ones that Frank Bon used to wave AD Skyraiders in 1955: 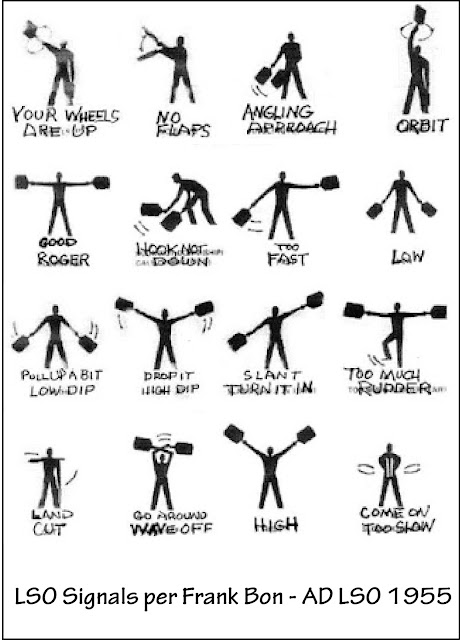 Note the addition of the angling approach signal, which meant that the pilot was coming in at an angle to the axial deck rather than turning to line up with it. That may be the signal that this LSO is giving the pilot of the F9F Cougar during field landing practice or he may have stopped waving and commenced to relocate himself farther stage right. (The caption given with one instance of this picture's publication that he's giving a cut signal, which is clearly not the case.) 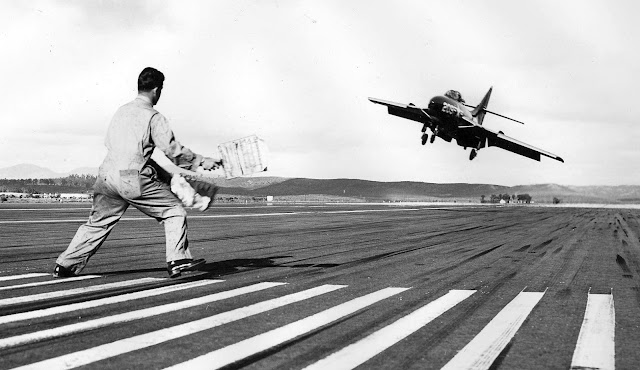 This is a good illustration of the cut signal: 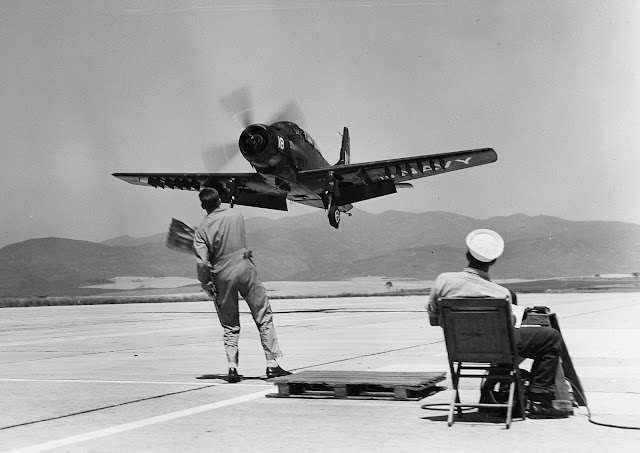 Note that jets had to be cut farther out than the propeller-driven airplanes because they did not lose speed and settle as quickly: 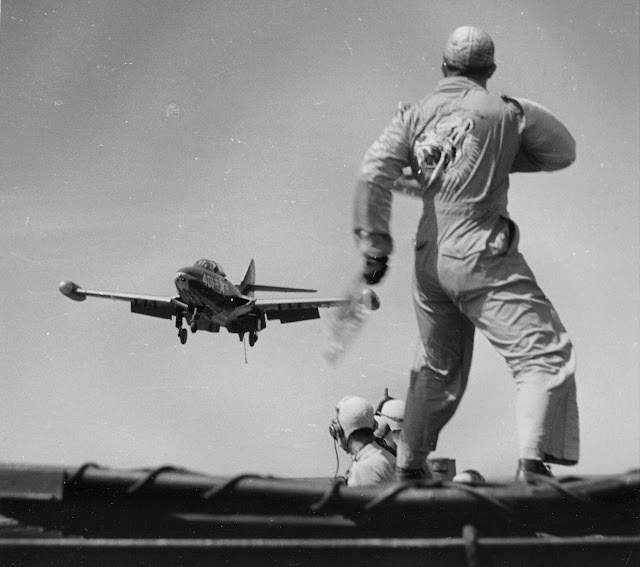 The student LSO, who was invariably a Naval aviator, had to become well acquainted with what a good approach looked like, both in altitude and speed, from the LSO's viewpoint. With jets, angle of attack was the better indicator of the proper approach speed since the speed varied with weight (which could be significantly different due to the jet's much higher fuel burn) and the angle of attack did not. Early on, jets were marked with stripes, first on the nose and then on the vertical fin, to provide an angle of attack reference based on which stripe a certain part of the airplane, like the horizontal tail, was aligned with. 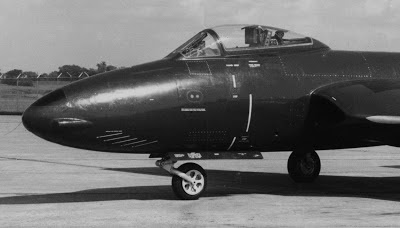 Getting the picture mean watching many landings waved by an experienced LSO. (The Brits also had the trainee LSO practice with experienced pilots who were unlikely to be misled by LSO judgment errors.) At first, the neophyte LSO would only be qualified to work with one type of aircraft. Over time, he might gain enough experience to bring other types aboard.

The paddles used were traditionally hand-made by the LSO himself. As a result, there was significant variation, for example round vs. square or oval. 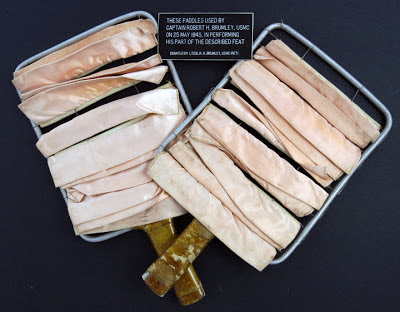 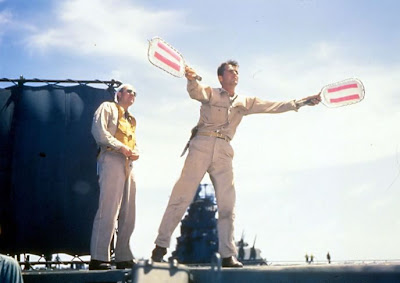 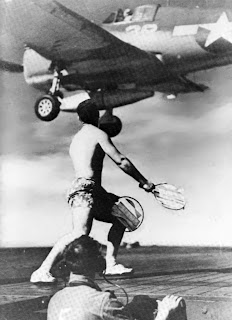 When the higher speed of jets required that the LSO be visible from a greater distance, standard flight suits were modified to provided a more obvious indication of the relationship of the LSO's body and his arms. 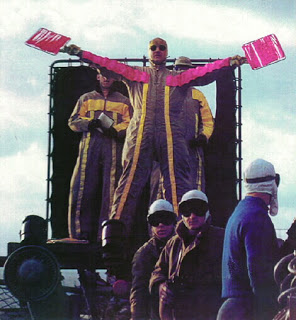 The requirement for all-weather and night landings increased the need for better visibility of the LSO. This was initially provided by a suit with stripes and paddles that fluoresced with black light but that was soon replaced with a lighted suit and paddles as shown here. 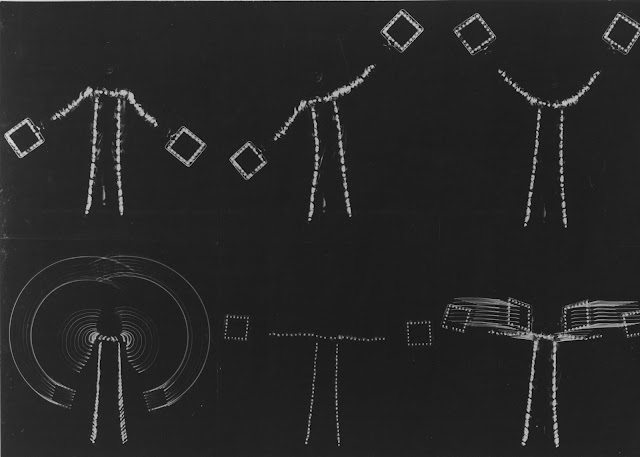 A readily available example of the activity on the LSO platform is provided by the excellent movie, Bridges at Toko-Ri. 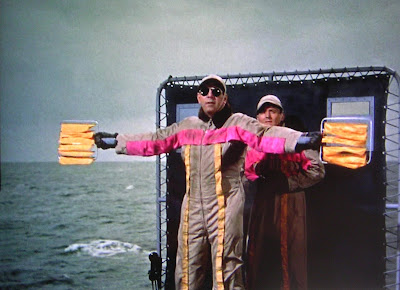