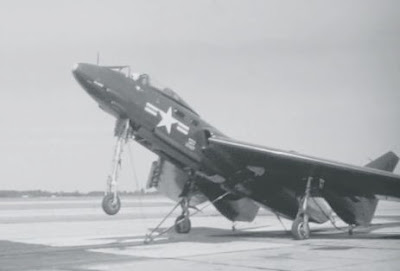 In the early 1950s, the weight and end speed requirements of new jet airplanes were at the upper limits of the capability of existing hydraulic catapults. One technique explored to get the maximum benefit out of what was available was the tail-down launch at maximum angle of attack.
The F7U Cutlass was already positioned at an exaggerated nose-up attitude when on its wheels but this catapult lash-up made it more so. The holdback fitting, main gear strut extension and position (it was angled forward for takeoff), and the little "grocery-cart" wheels added under the vertical fins allowed the catapult crew to tension the airplane at the steepest possible angle. You'll note that the tires are notably flattened by the forces involved.
However, the shore-based trials at Patuxent River demonstrated that there was no benefit relative to a more conventional hookup to the catapult: The angle of attack off the bow was greater but the end speed less, so the lift attained at the end of the catapult stroke was about the same. The extra time required to force the airplane into this position for launch was also a drawback. In any event and fortunately for Naval aviation,  Colin Campbell Mitchell's timely development of the steam catapult allowed a significant increase in the upper weight and end speed limits.
Posted by Tailspin at 2:00 PM No comments: 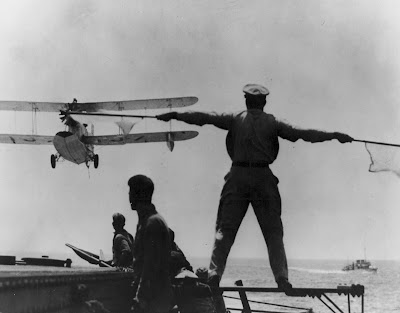 Pictured is an Loening OL-8 landing aboard Lexington, CV-2, with the Landing Signal Officer (LSO) giving the Roger signal, for the pilot being at the right airspeed and altitude and lined up correctly, and about to give the cut for descent and touchdown.

The LSO was one of the earliest innovations in landing aircraft aboard carriers. He stood on the port side of the deck near the ramp and by using a standard set of signals, assisted the pilot in touching down among the arresting wires at minimum speed and a low rate of descent.

For some reason, the Royal and U.S. Navies developed slightly different techniques for landing aboard. Royal Navy pilots were taught a descending approach and the LSO signal for the pilot being above the correct approach path was lowered paddles, meaning descend. The U.S. pilot made a low, flat approach and the LSO signal for being too high was raised paddles. (The signals for lineup were the same since the U.S. Navy signals for correcting height and lineup were inconsistent, like tilting down to the pilot's left to ask for tightening the turn and raising the paddles up for descend.) Fortunately, there was very little cross decking between the services during the war.

In 1948, the Royal Navy elected to change to the U.S. Navy LSO signals and shortly after that, adopted the low, flat approach as well. A reduction in accident rate resulted although it's not clear why. The British subsequently developed the mirror landing approach aid. The mechanics of the mirror concept combined the original British descending approach and the American signal for being too high, with the ball on the mirror going up when the airplane was above the desired "glide" slope.

Following the transition to the mirror-guided approach, the LSO role was initially downgraded to more of an administrative one in the belief that the pilot no longer needed his guidance. It was soon established that the LSO could detect a trend quicker than the pilot and moreover, had a better sense of deck motion, which affected the validity of the mirror display even though it was gyro stabilized. As a result, the LSO was again established as the controlling authority for the approach.
Posted by Tailspin at 10:19 PM No comments: