The statement that the F8U/F-8 Crusader was the first is in the subtitle of Bill Spidle's excellent book on its development (see yesterday's post). Some might quibble with that (many think it was the F4D Skyray if the claim is defined as supersonic speed in level flight) so I undertook to determine which airplane had bragging rights from that standpoint.

After World War II, the Navy embarked on an ambitious program to develop high-performance swept-wing jet fighters, contracting for the Vought F7U-1 Cutlass, Douglas F4D Skyray, Grumman F10F Jaguar, and McDonnell F3H Demon. All were intended to have afterburning engines and be supersonic, at least in a dive. The F4D was expected to be supersonic in level flight.

It was only capable of about Mach 0.9 in level flight. The thrust required as you approach Mach 1, the speed of sound (which varies with air temperature) is significant as depicted, approximately, in this illustration. 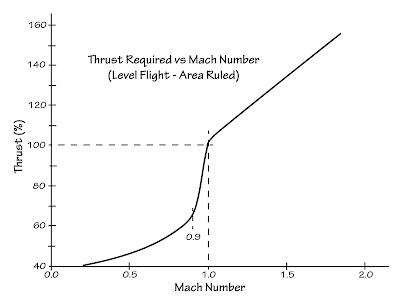 Note the dramatic steepening of the curve at about Mach 0.9.

None of the other fighters of its generation (or the F7U-3 for that matter) were capable of staying supersonic in level flight either. The XF10F was never dived faster than Mach 0.975 (for one thing, Grumman was never provided an afterburner for its J40 engine) in a single high-speed test flight on 11 October 1952, five months after its first flight. The sleek XF3H Demon, which first flew in August 1951, was probably the fastest, having been dived to Mach 1.3, but as far as I know, it never broke the sound barrier in level flight and the heavier production Demons were not as fast.

What of the F4D? Douglas projected its top speed would be Mach 1.2 in level flight. Its first flight on 21 January 1951 was with an interim J35 engine. After the more powerful J40 finally became available (without an afterburner), an XF4D was dived through the sound barrier in mid 1952. In October 1953, finally equipped with an afterburner, it set an official absolute speed record on a three-km low-altitude, sea-level course of 753.4 mph. That wasn't, however, supersonic. The speed of sound at 15 degrees C and sea level is 761.1 mph but the successful attempt was made, deliberately so, when the temperature had reached almost 37 degrees C (even though it decreases engine thrust, a higher temperature is your friend when you don't have quite enough thrust to go supersonic in level flight) because that raises the speed at which the transonic drag increase begins. The speed of sound was therefore about 790 mph on the course, which means that the XF4D's speed was about Mach 0.95.

Although Douglas engineers and test pilots strove mightily to reduce the F4D's transonic drag and achieve supersonic speed in level flight, they were unable to do so, as reported by the Navy following its formal acceptance tests in late 1957.

Nevertheless, the belief persists that the Skyray was supersonic in level flight, justified by a statement to that effect in Wikipedia and/or any of several books. Tellingly though, neither Bob Rahn (a Douglas experimental test pilot who made many of the F4D development and demonstration flights) nor Ed Heinemann mention it in their respective books. In fact, Rahn describes the effort to do so and dives at well over Mach 1 but never states that it was; Heinemann doesn't either and he was never known to hide his light under a bushel. My good friend and mentor, Hal Andrews, who was an engineer at the Bureau of Aeronautics for many years as well as a very well respected naval aviation historian, had personal knowledge of the program and insisted that the F4D was not supersonic in level flight.

If you restrict claimants to supersonic speed in level flight, there is one other contender, the Grumman F11F Tiger. It was probably the first fighter to be area-ruled by design. Grumman expected it to reach a level flight speed of Mach 1.21. Grumman received "go-ahead" for the program a month before Vought was notified that it had won the OS-130 competition. It first flew, as the F9F-9, on 30 July 1954. However, Grumman didn't receive an afterburner for it until late 1954 or early 1955 and the first attempt to fly supersonically with it on 25 January 1955 was terminated at Mach 1.03 when it failed catastrophically. Wright wasn't able to provide another flight-worthy one for more than a year. In May 1956, the F11F would finally just break the sound barrier in level flight; according to its Standard Aircraft Characteristics Chart, its top speed was Mach 1.1 at 35,000 feet. During BIS evaluation, it failed to meet guarantees but was definitely, if barely, supersonic (the second colum is the specification requirement; the third column is Pax River's measured performance):

I've heard that the training-command F11Fs were unlikely to be capable of breaking the sound barrier in level flight but easily did so in a descent.

Meanwhile, Vought had flown its F8U for the first time on 25 March 1955, breaking the sound barrier in the process, possibly but not necessarily in level flight.

Because of ongoing modifications required to make the F11F suitable for operational use, the F8U was delivered to VX-3, the cognizant Navy Air Development squadron, in December 1956, whereas it didn't receive its first F11F until February 1957. However, deliveries to operational squadrons of both airplanes were made in March 1957 and VX-3 took both aboard for at-sea evaluation in April. In the end, although probably not predicated on the fighters' respective readiness, VF-32 deployed with its F8Us aboard Saratoga on 1 February 1958 while VA-156 with F11Fs didn't go out aboard Shangri-La until 8 March 1958.

So Grumman received a contract for the supersonic F11F a month earlier, flew for the first time several months earlier, went supersonic two months earlier, and then faltered on the back stretch, finally deploying in what amounts to a dead heat. It should also be noted that the F11F was just barely supersonic in level flight, while the F8U was really supersonic. Although when the excellent J79 was substituted for the so-so J65, the F11F could arguably match the F8U in speed and altitude capability...

After all that, I think the edge goes to the Crusader over the Tiger for the first supersonic U.S. Navy fighter but it depends on your definition of what constitutes "first" and it won't be by much.