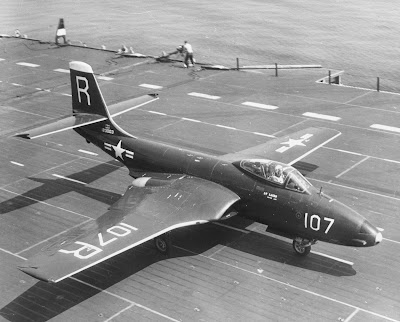 The F2H-1 Banshee fuselage was not shorter than the -2. Only the three XF2H prototypes had the shorter fuselage. The stretch was made in belated recognition of the need for more fuel. The main difference between the -1 and the -2 is that the former did not have provisions for tip tanks. (Still not enough fuel.) As a result, the -2 wings could not be unfolded (or folded) with fuel in the tip tanks. Full tip tanks were also an overload condition with a lower g limit imposed.

Which leads me to the second and more serious canard. The F2H did not have "weak" wings. A Navy pilot pulled the wings off one at Patuxent River in May 1949 but that's because he exceeded the 6-g limit, which was the fighter standard for the time. The problem was that F2H was initially a bit light on the controls so overstressing it was too easy. That was fixed with a control system modification to add a bob-weight that increased stick force with increasing g.

The F9F Panther may have been stronger than specification-the incident at Pax when the rear fuselage came off on an arrested landing not withstanding-but the F2H was strong enough. It could also fly higher and longer than the F9F Panther, carry more ordnance, and may have been a bit easier to bring aboard on a dark and stormy night. The need to spread its wings to fill the tip tanks was an operational deficiency, however: too much space required in the spot for launch. (It may have also reinforced the reputation for "weak" wings.) 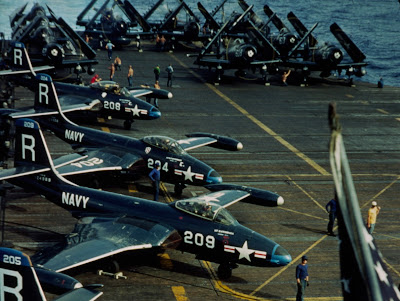 The top photo is from the National Archives, 80-G-406268, and is of a VF-171 F2H-1 aboard FDR on 8 August 1949, only a year after the first production F2H-1 flew. If I remember correctly, the bottom photo is from Bob Lawson's collection and is of VF-172 aircraft aboard Essex during the Korean War.
Posted by Tailspin at 9:27 AM No comments:

Just When I Thought I'd Seen Everything II 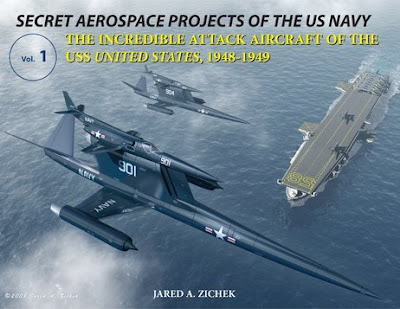 This is an amazing collection of the proposals for the competition won by Douglas with what became the A3D Skywarrior. As far as I know, at least 95% of the contents have never been published. Jared Zichek did a thorough job of documenting the Boeing F8B, and this is even more exceptional, not to mention welcome.
If you're interested in Naval aviation history, you won't need any more convincing. If you aren't sure, go here for a page-by-page thumbnail review.
Order here
Posted by Tailspin at 9:51 PM No comments: 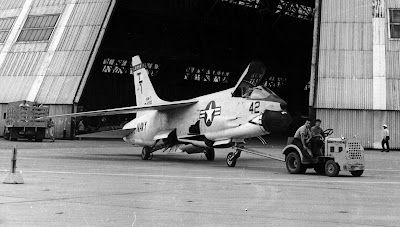 For more on Crusader armament changes, see http://thanlont.blogspot.com/2013/03/a-brief-history-of-f8u-crusader-armament.html
Posted by Tailspin at 9:12 AM 2 comments:

Missed It By That Much 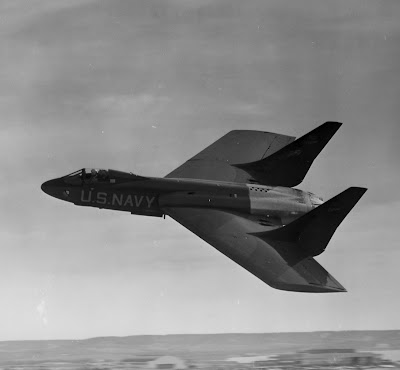 If Vought hadn't made the F7U-1 control system so complicated, underestimated the empty weight by so much, or realized that the visibility over the nose had to be a lot better than the existing specification on an airplane approaching at such a high angle of attack; Westinghouse had done as good a job initially on the J34 with afterburner as they did on the J30; and the Navy had figured out sooner that landing on an angled deck was a lot easier than an axial deck, then the F7U-1 would have been trolling for MiGs over Korea: It was faster than an F-86 with twice the rate of climb and a terrific rate of roll...
Two served briefly with the Blue Angels. The show was spectacular but the stars were failure prone so it was a short run.
Posted by Tailspin at 11:02 PM No comments: 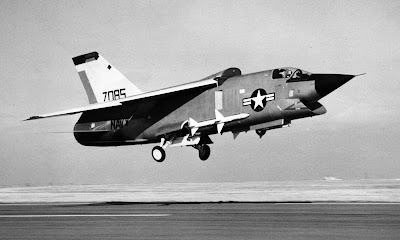 Unfortunately, the F8U-3 was a single-seat fighter and the Navy had become convinced that a two-man crew would be at least slightly more likely to shoot down a Soviet bomber whose crew was intent on sinking an aircraft carrier. Given the unacceptability of even damage to a carrier, that advantage trumped faster, more maneuverable, etc. Following the cancellation of the program in December 1958 (and Merry Christmas!), Vought unsuccessfully proposed the Crusader III to the Air Force and the Canadians. NASA flew the prototypes for a year or two in a supersonic transport research program and then they were scrapped.
Pictured is the first production airplane and the last of three -3s to fly. A monograph on the F8U-3 is my winter project. I'd appreciate the loan of any unpublished pictures or documentation so it will be as complete and thorough as possible.
Posted by Tailspin at 12:36 PM No comments:

Just When I Thought I'd Seen Everything 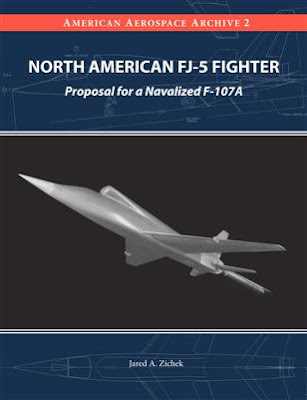 In 1955, Grumman and North American were at a disadvantage relative to Vought in the competition to furnish the Navy's next day fighter. The F8U Crusader was powered by the new P&W J57. Their candidates, the F11F and the FJ-4, had the less powerful Wright J65. The FJ-4 didn't even have an afterburner. Both proposed a J79 alternative, Grumman the Super Tiger and North American, the "FJ-5" which was similar to its F-107A but smaller. The Navy was interested enough in the Super Tiger to give it a new designation, F12F, and at least begin the production contract process but ultimately only bought two conversions of production Tigers as F11F-1Fs to provide early J79 in-flight experience before the XF4H first flight. North American's consolation prize was development and production of the FJ-4B.
For more information on Jared Zichek's excellent FJ-5 monograph and to order it, go here.
Posted by Tailspin at 11:36 AM No comments: 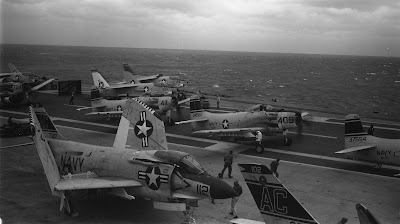 Once upon a time, specifically January 1958 aboard Saratoga. The picture was taken by Aviation Week's Pete Bulban. Two F8U-1 Crusaders are on the angled deck catapults, one with the wing up and the other with the wing down and folded. ADs are taxiing either to the bow catapults or for a deck run, with a widebody AD-5W at the far left. The airplane and tail in the foreground are F3H-2 Demons, a much maligned airplane but actually a relatively long-serving workhorse. The Crusader may have been capable of 1,000 mph, but on a dark and stormy night it was the Demon that would be aloft protecting the carrier from a bomber threat.
Posted by Tailspin at 4:51 PM No comments: