Today I read an article in an English modeling magazine by a well-known aviation history author who repeated the error that the F2H-2 fuselage was longer than the F2H-1's, whereas the length increase actually occurred between the XF2D-1 and the F2D-1 (F2H-1). I decided to fix that on Wikipedia as a public service. In the process of doing so, I also fact-checked statements about the fuel capacities of the three airplanes. That's when I discovered that I had only resolved part of the length error that continues to be promulgated.

At the time of the XF2D-1 mockup review, its Standard Aircraft Characteristics (SAC) chart dated 1 May 1945  lists the fuel capacity as 510 gallons internal plus a 345 gallon external tank. Unfortunately, there were no drawings on this SAC chart. However, the length was given as 38' 9.5". The external tank was probably similar to the one provided for the FD-1 (FH-1) as shown here in November 1948.

A month later, an addendum page was added providing the "effect of mock-up changes on XF2D-1 preliminary data sheets dated 1 May 1945": "Subsequent to the distribution of the XF2D-1 data sheets, mock-up board recommendations revised the fuel system to eliminate the external droppable tank and provide instead an increase in internal protected fuel capacity from 510 to 847 gallons."

The XF2D-1 SAC chart dated 1 June 1946 shows an overall length of 38' 11.5", an increase of only two inches. The total internal-fuel capacity shown is the required 848 gallons, including the two tanks in the stub wings that presumably was 90 gallons of the more than 300-gallon increase required. I would guess that the fuselage was deepened from the mock-up configuration to provide most of the rest. 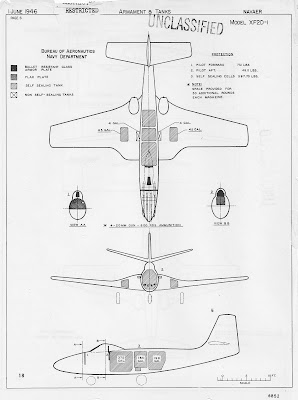 Note that there are three large fuselage tanks, again similar to the FD/FH fuel system configuration.

According to the SAC charts, the F2H-1 internal fuel capacity was increased by only 29 gallons over that of the XF2D-1. What's a little confusing is that the 1 April 1948 F2H-1 SAC chart page for Armament & Tanks is identical to the one above for the XF2D, almost certainly an error in compiling the SAC chart since the correct fuel quantity of 877 gallons is listed on its Page 1. (Each tank has a small but different capacity, with the largest difference being the aft tank at 223 gallons instead of 198.) Another oddity is that this SAC chart lists 200-gallon tip tanks for the F2H-1, whereas it's clear from the Pilot's Handbook for the F2H-1 dated 1 October 1949 and the F2H-2 SAC dated 1 November 1949 that the F2H-1 did not have provisions for tip tanks. Note that the F2H-2 SAC page for Armament & Tanks once again uses the XF2D artwork although it has been updated to show the -2 tip tanks and label each fuselage fuel tank with its correct volume without changing the size or shape of the tanks from the original XF2D illustration. 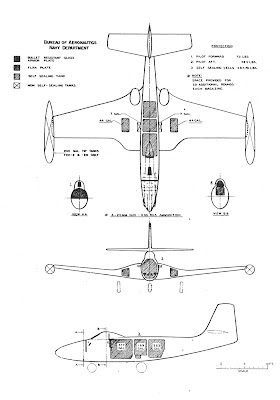 Not withstanding all that, the revelation to me is that the increase in fuel system capacity does not account for all or even most of the fuselage length increase ahead of the engine inlets between the prototype XF2D and the production F2D (F2H). A net increase of 31 gallons in the three fuselage tanks (the wing stub tanks were reduced in capacity by one gallon each) requires a net increase in length of the tanks of only about five inches, not 12. The remainder may have resulted from the need for additional interior volume for equipment and/or the desire to increase the fineness ratio of the fuselage and canopy to reduce drag. A center-of-gravity correction can't be ruled out, either.
Posted by Tailspin at 6:38 PM No comments: 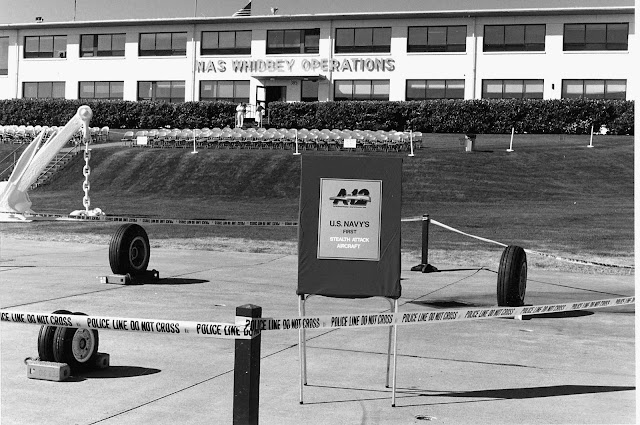 The Supreme Court has agreed to hear part of the A-12 appeal by Boeing and General Dynamics. (See here, here, and here for the background; the case status is provided here.) Note that they are limiting their review to the Fifth Amendment issues and not reviewing the termination for default issue.

09-1302 BOEING COMPANY V. UNITED STATES
DECISION BELOW: 567 F.3d 1340
LOWER COURT CASE NUMBER: 2007-5111, 2007-5131
QUESTION PRESENTED:
1. Whether the Due Process Clause of the Fifth Amendment permits an appellate court to adopt a new legal rule, inconsistent with its own prior ruling in the same case, and then apply it retroactively to the record established in the trial court pursuant to the prior ruling, without remanding to afford the parties the opportunity to prove their case under the new rule. 2. Whether the Due Process Clause of the Fifth Amendment permits the Government to maintain a claim while simultaneously asserting the state secrets privilege to bar presentation of a prima facie valid defense to that claim. 3. Whether the Government may terminate a government contract for default on the ground that a contractor has failed to make adequate progress toward timely completion of that contract where the Government has not set a valid deadline for completing the contract.
CONSOLIDATED WITH 09-1298 FOR ONE HOUR ORAL ARGUMENT
09-1298 LIMITED TO QUESTION 1
09-1302 LIMITED TO QUESTION 2
CERT. GRANTED 9/28/2010
Posted by Tailspin at 11:50 PM No comments:

For example, I have sometimes referred to any angled-deck Essex/Ticonderoga-class* carrier as a 27 Charlie. The nickname comes from the SCB (Ship Characteristic Board) design number for a set of Essex-class carrier modifications that began to be defined in the late 1940s, when the Navy realized that a major upgrade program was needed to allow them to operate jets, which had to be launched and recovered at higher speeds, and larger attack aircraft.

While doing some fact checking for my Skyhawk book for Specialty Press, including trying to figure out why a hangar-deck illustration appeared to show two starboard deck edge elevators on an Essex-class carrier (see here), I discovered that I was in error. As it turns out, the SCB 27 modifications added more powerful catapults and arresting gear, a reinforced flight deck, larger centerline elevators with additional lift capability, a new island, and an increase in the aviation gasoline storage capacity, among other things,  but not the angled deck or starboard deck edge elevator. The first nine modified were 27As with the new H-8 hydraulic catapult and the final six were 27Cs (hence the Charley nickname) with the even newer and more powerful C-11 steam catapult, the most significant difference between the two upgrades. The nine 27As and three of the six 27Cs were completed and placed into service as axial deck carriers; the addition of the angled deck was accomplished in a subsequent overhaul period. (Only one SCB 27 carrier, Lake Champlain, did not eventually receive the angled deck.)

Not, strictly speaking, a 27 Charlie (Kearsarge) 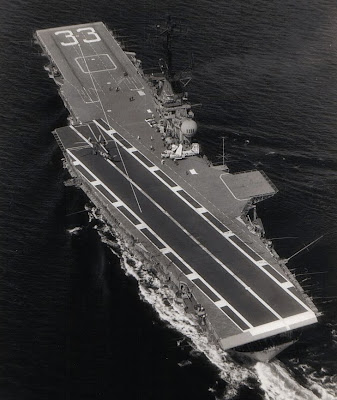 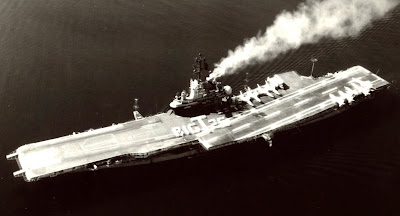 
In short, of the 15 (including Antietam) Essex/Ticonderoga-class carriers with angled decks, there were only six 27 Charlies: Intrepid (CVA-11), Ticonderoga (CVA-14), Lexington (CVA-16), Hancock (CVA-19), Bon Homme Richard (CVA-31), and Shangri La (CVA-38).
The last three (Intrepid, Ticonderoga, and Hancock) of the six 27Cs modification were completed with the angled flight deck, so-called hurricane bow, and a starboard deck edge elevator replacing the aft centerline elevator. These modifications were the major part of SCB 125, which was then applied all but two of the carriers updated by SCB 27A and 27C. (These three were also unique in that the starboard deck edge elevator was located farther aft than on the other three 27Cs or any of the 27As subsequently modified in accordance with SCB 125, hence the hangar deck illustration mentioned above showing two locations for that elevator.)

The 27 Charlies are also distinguished by a 70-foot long forward elevator. However, the three modified at Puget Sound (Lexington, Hancock, and Shangri La) were originally completed with the standard SCB 27 54-foot forward elevator for some reason, with the 70-foot version being retrofitted at some point.

More than half of the angled-deck Essex-class carriers were therefore 27 Alphas plus the SCB 125 changes. One, Antietam (CVA-36), was neither a 27A or C but it was modified with an angled deck for an evaluation, which resulted in SCB 125. The starboard deck edge elevator was not incorporated. Antietam was eventually relegated to a training role.

Strictly speaking, it is not even correct that all angle-deck carriers with steam catapults were 27 Charlies. The first carrier to be modified in accordance with SCB 27A, Oriskany (CVA-34), had its hydraulic catapults replaced with steam catapults in the late 1950s when the angled deck was finally added to it. This was the unique SCB 125A configuration. From a capability standpoint, it was equivalent to the other 27 Charlies.

For much, much more on the subject of the development and description of U.S. Navy aircraft carriers, I recommend Dr. Norman Friedman's excellent U.S. Aircraft Carriers: An Illustrated Design History, Naval Institute Press, 1983, ISBN 0-87021-739-9.

* The most significant difference between the so-called Essex and Ticonderoga classes, if I understand correctly, is that the Ticonderoga-class had the upper part of the bow extended slightly to accommodate a second quad 40 mm cannon emplacement just in front of and below the flight deck. This gives rise to the categorization of short hull (Essex) versus long hull (Ticonderoga) ships; they were the same length at the waterline and the flight decks were essentially the same size.
Posted by Tailspin at 5:05 PM 4 comments: