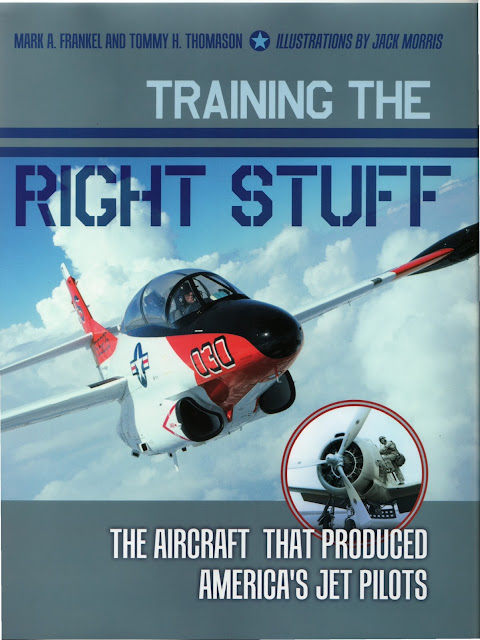 "A comprehensive study of the training aircraft used to transition the United States military into the jet age. At the end of World War II, high-performance jets with unfamiliar operating characteristics were replacing propeller-driven airplanes. As accident rates soared, the Air Force and Navy recognized the need to develop new trainers to introduce fledgling as well as experienced pilots to jet flight. The first step occurred in 1948, when a two-seat jet trainer, the T-33, was developed with private funds. It was welcomed by the Air Force and subsequently the Navy, allowing both services to start building modern air arms. Over time other new trainers were developed to serve specific needs while innovations, such as high fidelity simulators, accelerated the process, reduced costs, and increased safety. The evolution continues today with the goal of producing high-quality newly winged aviators for assignment to operational squadrons."
Posted by Tailspin at 12:47 PM 2 comments:

Once upon a time, the Navy had the luxury of margin in its airplane inventory. In the mid-1950s, an air group might have three fighter squadrons or even four assigned to it. Since it would usually deploy on a carrier with only two, that meant the one left behind could be transitioning to a new type, which occurred much more often in those days.

Up until then, these squadrons were only assigned "day" fighters. All-weather fighters were provided to the air group for a deployment by so-called composite squadron as detachments (see http://thanlont.blogspot.com/2013/12/composite-squadrons-and-detachments.html). That was beginning to change however.

Carrier Air Group One is an example. For its history, see this excellent monograph by Douglas Olson and Angelo Romano: 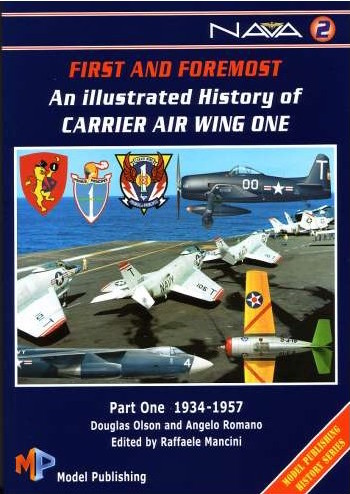 It is regrettably out of print and no longer available from the publisher, but try and find it elsewhere.

CVG-1 was blessed with four fighter squadrons in 1953. One of them, VF-11, the Red Rippers, began a transition to the Douglas F3D Skyknight in August. Note the very colorful red trim of the first squadron.

Prior to this, this big, two-man, three-radar, twin-engine all-weather fighter was only assigned to composite squadrons VC-3 and -4 and Marine all-weather squadrons. However, they proved to be unpopular aboard the carriers and only VC-4 made a handful of deployments. One of them culminated in the F3Ds (and their crews) being offloaded to a Marine night fighter squadron during the Korean War, where they were welcomed with open arms.

The Navy therefore decided to reequip VF-11 with its newest all-weather fighter, the single-seat F2H-4 for CVG-1's next deployment. That transition began in December 1953. Its 14 Skyknights were transferred to a sister squadron, VF-14, the Top Hatters, beginning in January, replacing its obsolete F4U-4 Corsairs, and introducing its pilots to the jet age.

As it happened, the number of Navy carrier air groups was set by Congress. However, the surge and operating tempo of the Korean war had required more than that number so the Navy created Air Task Groups, which "borrowed" squadrons from existing air groups for a deployment.  (See http://www.navalaviationfoundation.org/archive/sfl/sflshow.php?id=9085.) ATG-201 was formed up in June 1954 with one of its squadrons being VF-14, deemed surplus to CVG-1's immediate requirement. It retained its 4xx side number and yellow trim. The tail code was amended to be ATG.

VF-14 participated in an ATG-201 workup aboard Intrepid in October/November 1954.

(Note that the A and G have not been added to the T on the wing.)

However, when the time came for ATG-201 to deploy with Bennington in 1955, it was with CVG-1's VF-13 flying F9F-8 day fighters instead. The all-weather fighter capability was provided by a VC-4 detachment of F2H-4s.

Nevertheless, VF-14 continued to fly F3Ds through mid-1956 with CVG-1, reverting back to just T for the tail code (note the over-paint of the other letters on the fin), here bringing a high-ranking Defense Department official aboard Forrestal. 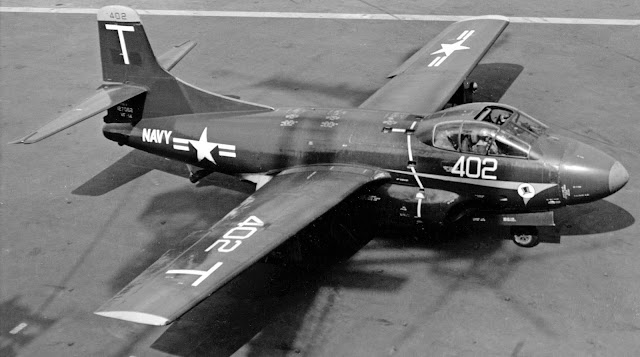 VF-14 did not, however, deploy with CVG-1 either while flying the Skyknight. After it transitioned to the F3H-2N Demon, it finally deployed with Forrestal in 1957, ending a four-year hiatus. 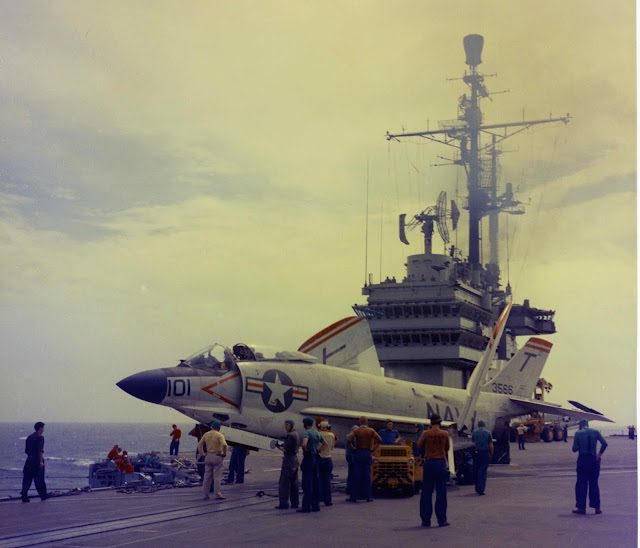