Okay - it's a bogus designation, based on the Navy practice of designating a research aircraft with its identifier for the manufacturer and the manufacturer's model number of the design, e.g. Douglas D-558-1 Skystreak. (Also see http://thanlont.blogspot.com/2010/07/navy-research-aircraft-designations.html) In this case, it was Republic's AP-46, the Air Force's XF-84H informally known as Thunderscreech, a flying test bed for supersonic propellers. While the model number is correct, an R for Republic is conjecture on my part. Neither it nor its predecessor, Seversky, was apparently ever assigned a manufacturer's designation by the Navy.*

I first read of the Navy's prospective involvement in the program in the 3 May 1954 issue of Aviation week, which stated that the XF-84H was to fly in August. It also stated "the Air Force will use the plane to check supersonic propeller characteristics" and, of more interest to me, after being "fitted with another type Aeroproducts propeller, it will also undergo Navy carrier trials".

As it happened, it didn't fly until July 1955 and there was no Navy testing. In fact, there was very little Air Force testing, since the two XF-84Hs only flew a total of 12 times, making precautionary landings on 11 of those occasions. As a test-pilot friend of mine once noted, it doesn't take long to take a close look at a hot horseshoe.

I had assumed that the Navy's interest in the airplane, if true, had been as a backup for the Douglas A2D Skyshark, which was powered by the same Allison T40 turboprop engine. 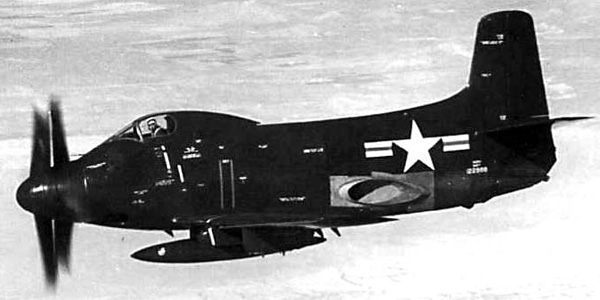 However, the timing was way off, the XA2D having first flown in May 1950. Also, its engine was more or less unsatisfactory from the get-go, suggesting that the Navy's backup for the A2D, if it had one, would have used a different one.

I just now took another look at the XF-84H program since Steve Ginter has released the latest in his excellent series of monographs on Navy and Air Force aircraft. 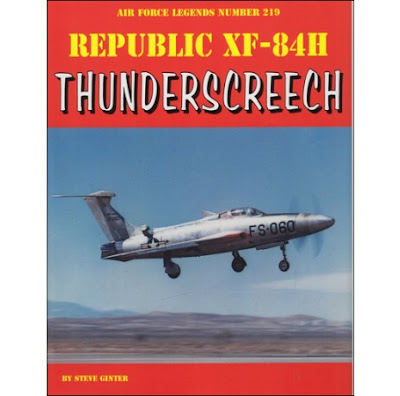 To order from Steve (he makes a few more bucks that way) see http://www.ginterbooks.com/AIRFORCE/AFL219.htm

There aren't many details about the Navy's involvement, but by happenstance, John M. Leonard updated his fascinating online article (http://www.enginehistory.org/Allison/XF-84Propulsion.html) about the XF-84H propulsion system for the latest issue of the American Aviation History Society Journal (Fall 2015). If you're not a member, you should be. This issue alone is worth the price of a year's subscription.

He describes what little is known about the Navy involvement, which was basically the funding of design and whirl test of an Aeroproducts six-bladed, two-row propeller beginning in late 1949 or early 1950. This is a picture from his AAHS article: 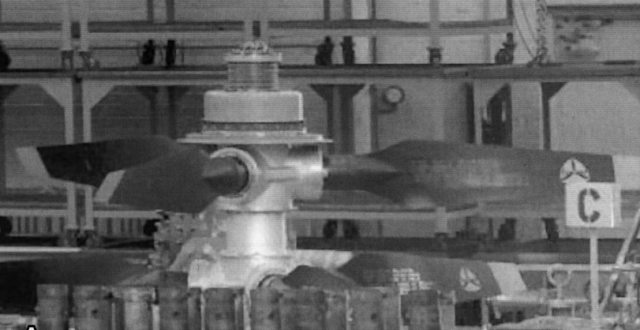 The aft (bottom, as depicted here) propeller is obscured in this picture. The propellers were nine feet in diameter and separated by about 18 inches longitudinally. The aft propeller was offset by 15 degrees and, surprisingly, given the amount of torque involved, rotated in the same direction. I assume that the shock waves from the front propeller dictated this configuration.

In the late 1940s and early 1950s, the Navy was interested in a supersonic propeller in order to get more range and endurance from a fighter with with jet performance, not to mention the takeoff and wave-off benefits of the propeller.

As far as I know, the Navy never got as far as assigning a Bureau Number to its AP-46, which would have been the third one built. Instead, the Air Force reportedly agreed to install the Navy gearbox and propeller in the second XF-84H after its initial flight test. That, of course, didn't happen.

* Seversky did propose a carrier-based variant of its P-35 to the Navy in 1937 and furnished one, free of charge, for an evaluation that included the Brewster F2A Buffalo and the Grumman F4F Wildcat. Seversky promoted it as "NF-1", signifying Navy fighter number one, but it was civil registered and as far as I know, not assigned a Bureau Number or Navy designation. For one thing, it was on loan from Seversky and not owned by the Navy. The Navy reportedly referred to it as the XFN-1. This is possible—albeit only informally since the designation had previously been assigned to a Naval Aircraft Factory fighter, BuNo A8978, several years before and the Navy rarely reused a designation even when, as in this case, the NAF design wasn't built. According to several websites, the P-35 evaluated by the Navy was modified by the Naval Aircraft Factory and therefore designated XFN-1; I suspect that this is a conflation of the two designations leading to an erroneous conclusion. For one thing, the Grumman XF4F-3 was assigned BuNo 0383 and the Brewster XF2A-1, 0451. If the NAF did modify the P-35 and it was assigned a BuNo, it would have almost certainly been higher than 0451, not 1,400 BuNos lower in the previous A series.

Mark Nankivil passed along the following from Jack Abercrombie:

While watching the Banshee at  https://www.youtube.com/watch?v=khVPlD2rNfc, which shows a ground crewman exiting on the right side. the question occurred to me—on which side of most top-entrance jet aircraft are built-in steps, left or right? And what about external, crew chief erected boarding ladders?

Which got me to thinking. It turns out that carrier-based propeller-driven fighters tended to have the boarding provisions on both sides of the fuselage, like the F6F Hellcat. 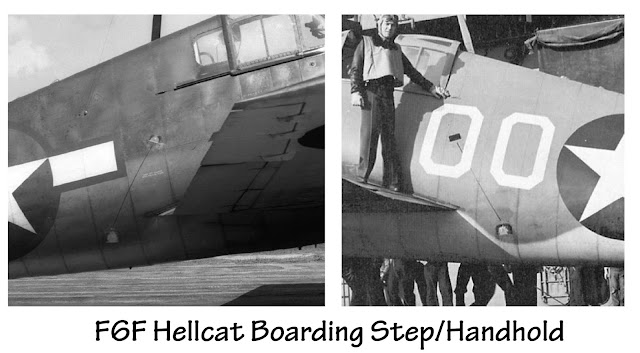 These big engines needed to be warmed up. This allowed a crew chief to do so if desired and then climb out of the cockpit on one side while the pilot climbed in from the other.

The F4U Corsair had a similar arrangement, but eventually the boarding provisions on the right side were somewhat more user friendly than the ones on the left, as with this F4U-5P that had a boarding step extending out from the fuselage.

The earliest jets were a mixed bag. The FH-1 had boarding steps on the right side but not on the left. 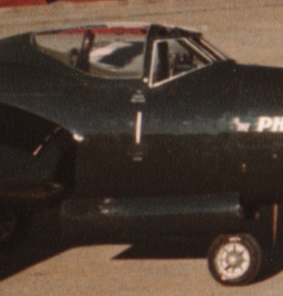 Note that there was a non-skid patch on the nose landing-gear door for the first step with the left foot.

The FJ-1 had boarding steps on both sides (there was also a door that opened on the left side as there was on the right). 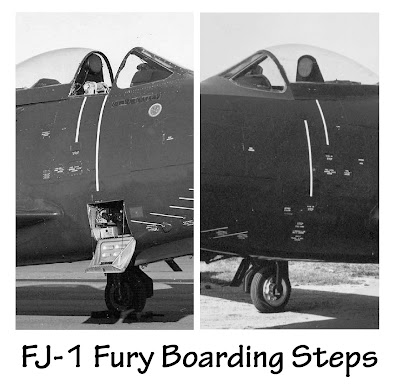 Since boarding provisions were heavy and jets didn't need to be warmed up, my guess is that it was quickly determined that only access was required from only one side. But which side?

The F6U Pirate was boarded from the left side. 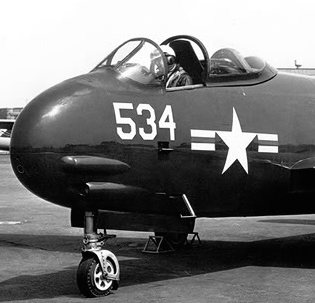 But the F3D was boarded from the right. 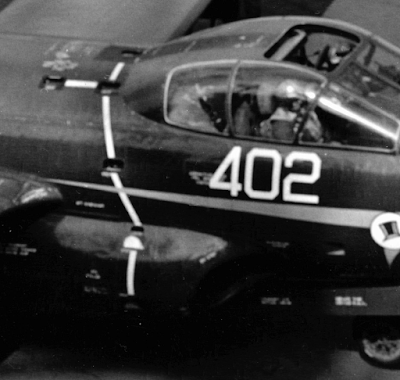 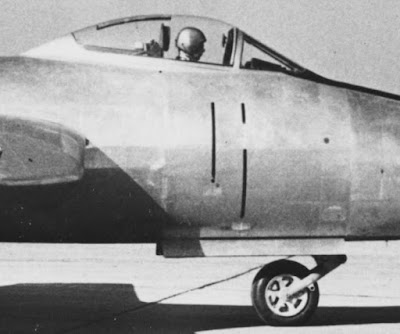 (Note that the landing gear door was not used as a step.)

However, the production F2H was boarded only from the left, with the gear door again serving for the first step. 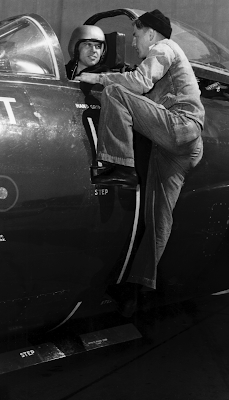 The F9F Panther was also boarded from the left side, which was now standard. 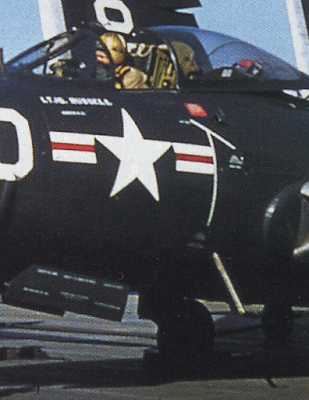 With the advent of bigger jets with a nose-high stance for low-speed lift like the F7U-1 Cutlass, providing for self-boarding began to be a challenge. 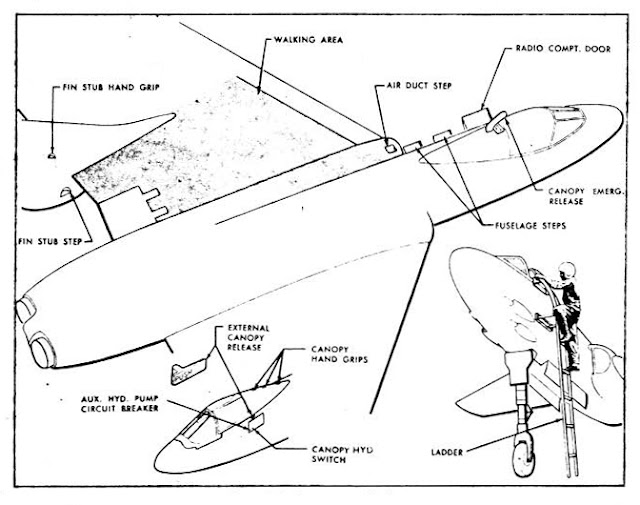 Ladders were still anathema on the carrier, but widely used ashore.


There were only two exceptions to the self-board requirement. One was the A4D Skyhawk. Self-boarding was one of many things left off in the pursuit of minimum empty weight (also see http://thanlont.blogspot.com/2011/09/self-boarding-for-douglas-skyhawk.html). The other was the F4D Skyray. In the latter case, both the mockup and the prototypes featured self-boarding from the left side. 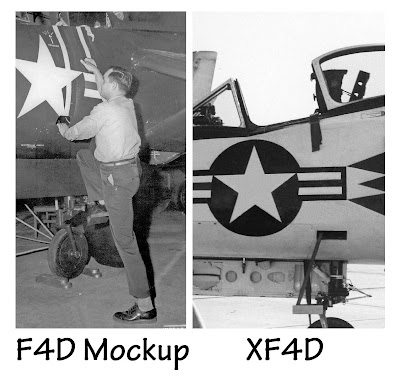 However, by the time the XF4D was ready for at-sea carrier qualification, it had more of a nose-up stance and a ladder (mounted on the left side) was needed to reach the cockpit. 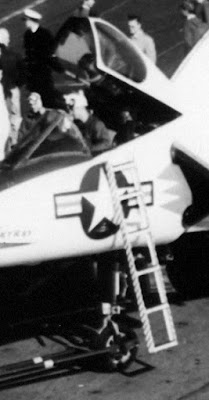 Somehow Douglas convinced the Navy to forego F4D self-boarding, probably because its contemporary, the A4D, didn't have self-boarding and used a similar ladder, (different than the one shown above) that could be attached only to the left side of the fuselage.

Similarly, the F3H Demon, which was delivered with self-boarding capability (see http://thanlont.blogspot.com/2009/06/self-boarding.html for the XF3H and http://thanlont.blogspot.com/2008/05/i-had-hoped-to-find-picture-like-this.html for the F3H), was allowed to have ladders even aboard carriers as was the F7U-3, which probably avoided several broken bones or worse (note that the F7U-1 steps have become pegs with a giant step required from the engine nacelle to the first peg and another from the second peg to the cockpit).

Why access from the left side? My guess is that given the primitive fuel controls of the first jet engines, a pilot's first start or two during his initial checkout in jets needed to be demonstrated and/or closely monitored in order to avoid overtemping the engine. Since the throttle was on the left side of the cockpit, the instruction by an experienced pilot or crew chief needed to be from the left side of the airplane.
Posted by Tailspin at 12:39 AM No comments: