Bob Sikkel called my attention to a detail on the McDonnell F3H-2 Demon that I hadn't noticed before, a post-mounted blivet out on the underside of the wingtip. I found excellent pictures of it in Don Hinton's walk-around photos of the F3H-2 at the National Museum of Naval Aviation in Pensacola.

Note that the "saucer" of the skid itself is clearly intended to be readily replaceable.

It's a definite oddity, since I don't remember anything like it on other Navy swept-wing jets. I was familiar with the XF3H-1 originally having a much longer version of it.

However, that skid disappeared from the XF3Hs when the wing was changed to move the ailerons inboard.

Nevertheless, a very short tip skid turns out to have been incorporated on the ill-fated production F3H-1. 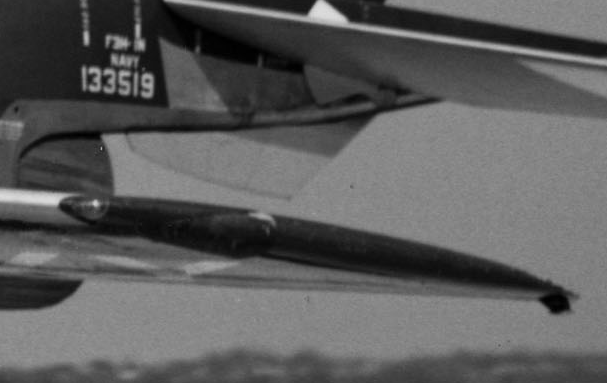 And it is present on the F3H-2 wingtip in almost every picture of it with sufficient resolution to discern it. It is identified in a F3H maintenance-manual illustration as the "wing tip skid". (Thanks to a Royal, a volunteer at the Emil Buehler Library at the National Naval Aviation Museum, for finding that for me.)

So what was that all about? The only other evidence of a similar device is on a circa 1946 Douglas predesign three-view of its D571-1, the predecessor to the F4D Skyray. 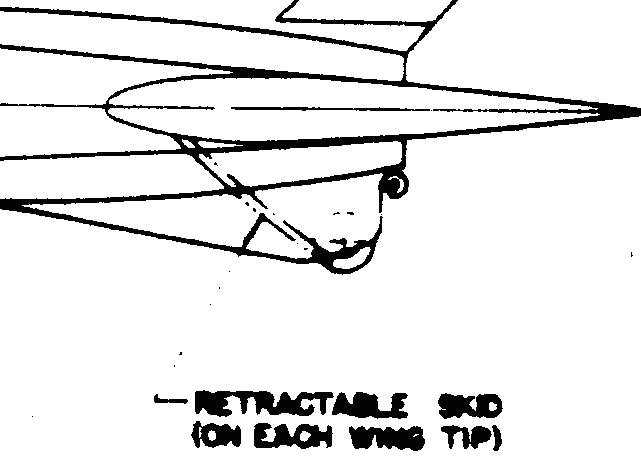 I haven't seen any evidence of one on either the F4D mockup or XF4D prototypes.

The Navy was nervous about the approach-speed handling qualities of a swept-wing carrier-based airplane so they contracted with Bell for a swept-wing conversion of its P-63, designated the L-39, in 1946. (Also see http://thanlont.blogspot.com/2011/04/bell-l-39-wing-sweep-evaluation.html) 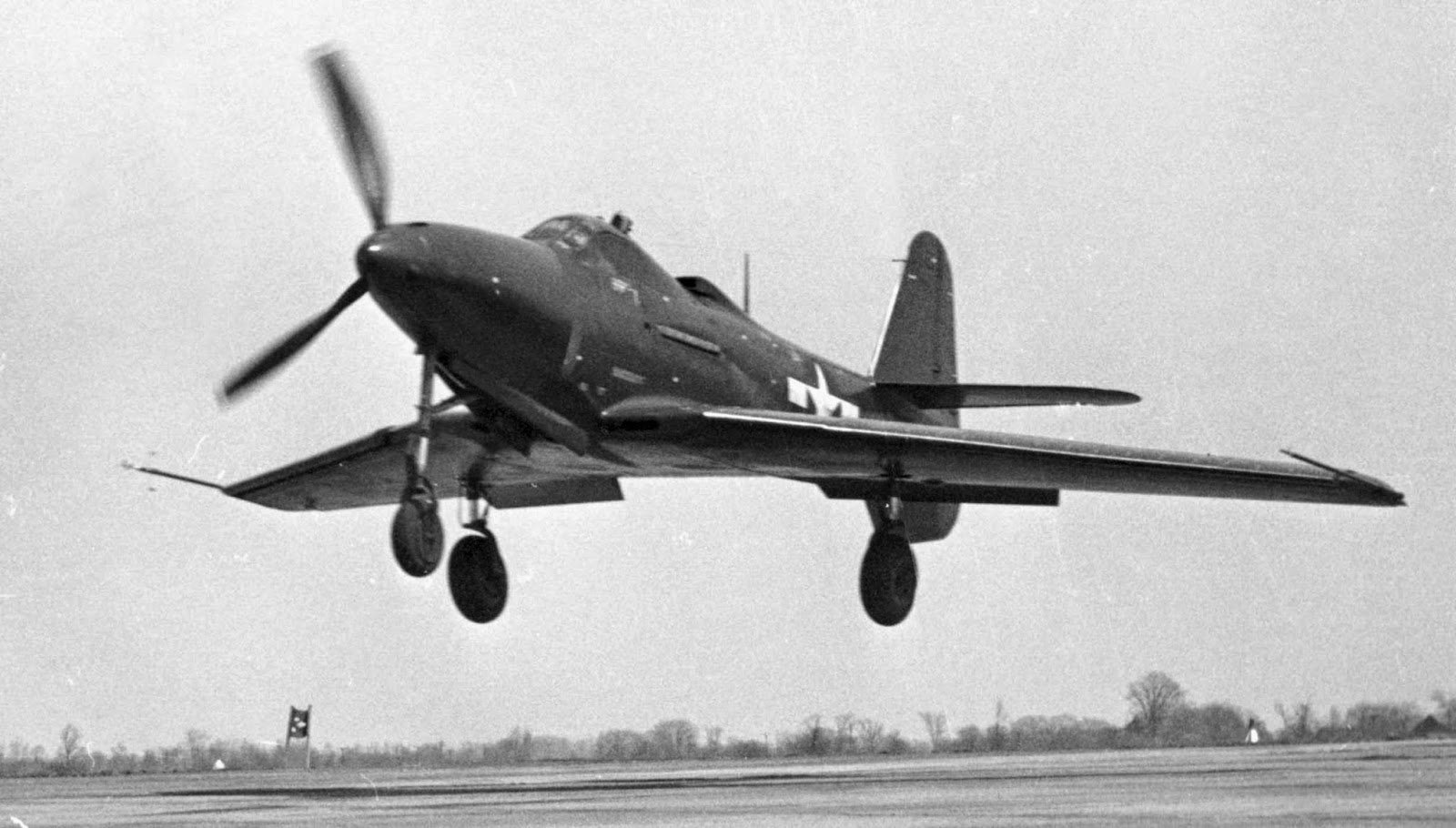 There's no evidence of tip skids on it or any mention in the flight test evaluation of the need for them.

If there was a concern at the Bureau of Aeronautics about swept-wing tip contact with the deck/runway, it didn't reach Vought or was ignored in 1945 when it was proposing what became the F7U Cutlass. There is no evidence of a tip skid in any of the proposal documents or the mockup or the XF7Us themselves.

Similarly, the earliest swept-wing studies at Grumman in 1947 don't feature tip skids and they weren't on the XF10F mockup, which was constructed about the same time as the McDonnell proposals for the F3H in 1948.

My guess is that the tip skid was required on the F3H because of the minimal ground clearance of the tip when the tail skid made contact, even when the wings were level.

There was no assurance that the wings would be level in a tip back situation, particularly in the event of a barricade arrestment.

The F2G was a Corsair developed by Goodyear and powered by the Pratt & Whitney R-4360, a four-row, 28-cylinder radial engine instead of the R-2800, two-row, 18-cylinder engine of the stock Corsair, roughly a 50% increase in horsepower. The advantage dropped somewhat with altitude, however, because the R-2800 had a two-stage supercharger and the R-4360 in the Corsair, only a single stage. And because the F4U-4 was about 650 lbs lighter with full internal fuel, it wasn't at much of a disadvantage from a speed or rate of climb standpoint even at sea level.

It is usually written that the F2G was created to counter the Kamikaze tactic that the Japanese introduced in the Pacific, first recognized in October 1944. If so, someone was prescient, since the decision to install an R-4360 in the Corsair had been made well before that. Pratt & Whitney used two F4U-1s for R-4360 for engine testing. The first one was for ground runs only, which began in May 1943. The second first flew on 12 September 1943.This picture was taken to illustrate the difference between the R-4360 configuration (referred to as F4U-1 WM for Wasp Major) and the R-2800 one:

Goodyear got a contract in March 1944 for 418 F2G-1s and 10 F2G-2s. The -2s were to be fully carrier-basing compatible. Don Armstrong flew the first FG modified with the R-4360 on 26 August 1944. So strictly speaking, the F2G's raison d'etre was not to counter the Kamikaze tactic, at least not originally. (My tongue-in-cheek explanation is that someone in BuAer wondered how fast a Corsair would go when powered by the humongous R-4360.) The F2G apparently was really intended to be supplied to shore-based Marine squadrons, as almost all of the order was for the -1 that didn't have a tail hook or powered folding wings.

In any event, only 10 F2Gs—five land-based -1s like BuNo 88454 in the first picture and five carrier-capable -2s—were built along with several Corsairs modified for flight test of the configuration. The Navy had elected to equip itself with the Grumman F8F Bearcat instead. 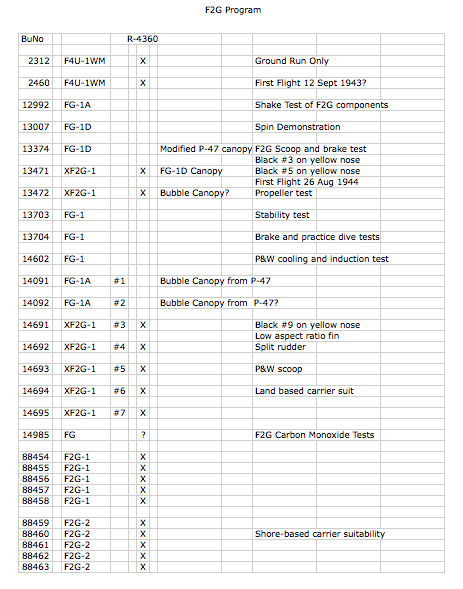 One XF2G was flown with a lower aspect-ratio vertical fin that replaced the side area lost by the change to the upper aft fuselage to accommodate the bubble canopy. (The rudder was not changed.) 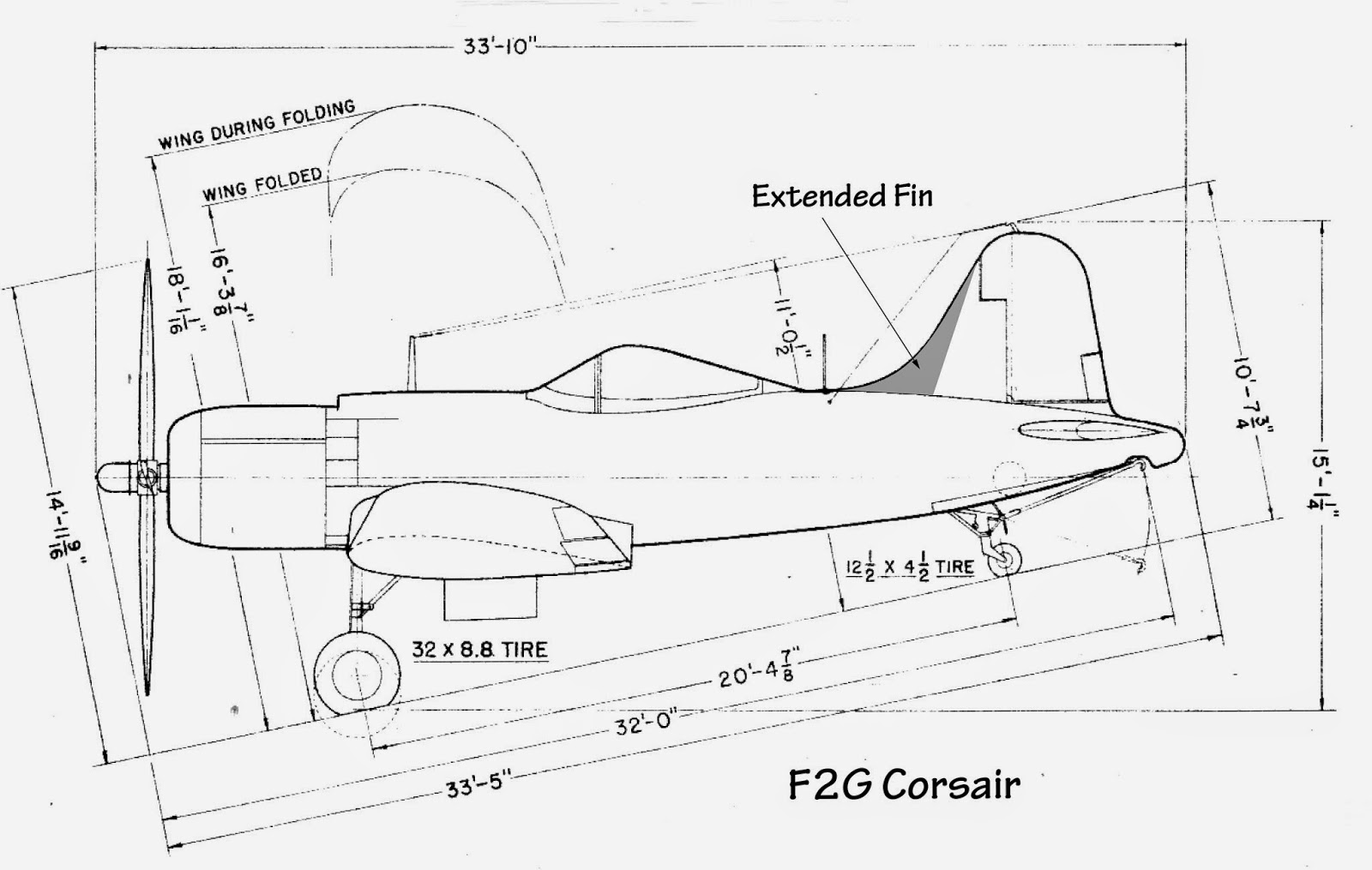 Goodyear decided instead to add a 12-inch plug to the bottom of the fin, which also provided for the addition of an auxiliary rudder for additional yaw-control power during a waveoff or go-around at low speed. 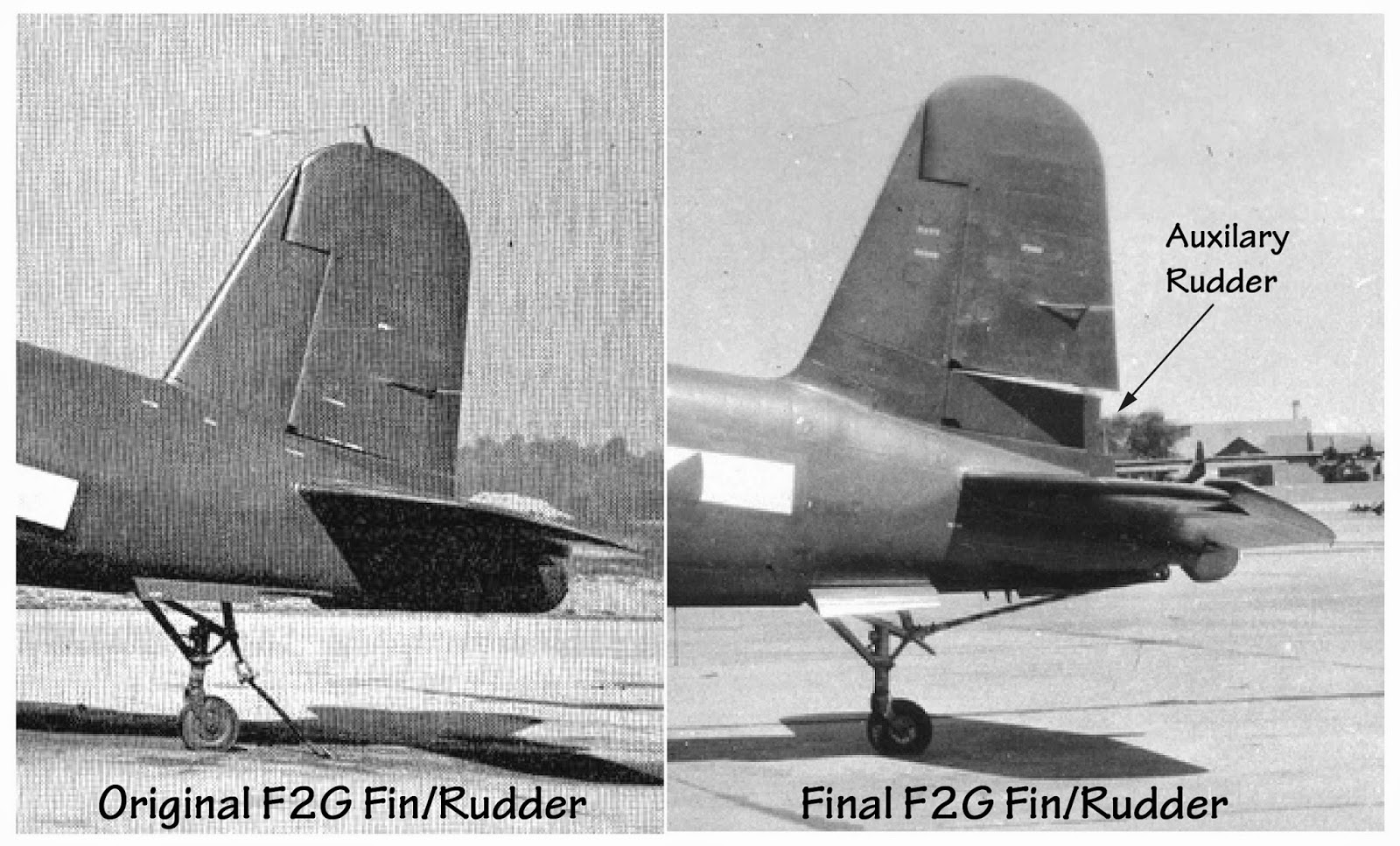 The auxiliary rudder deflected 12.5 degrees right when the flaps were more than 30 degrees down. (Full flaps was 50 degrees; recommended takeoff flap setting was 20 degrees.) The main rudder deflected 7 more degrees to the right than to the left.