In the summer of 1951 when this picture was taken by VF-51 squadron mate John Moore, Neil Armstrong was not yet 21 and had just been promoted to Ensign.  Air Group Five, of which VF-51 was a part, had just deployed on Essex and they were enjoying a day at the beach in Hawaii on their way to the Korean War.

Armstrong had completed four semesters of college at Purdue University, financed by the Navy under the Holloway Plan that obligated him to three years of service at that point before completing his degree. He was designated a Naval Aviator in August 1950, two weeks after his 20th birthday and two months after the start of the Korean War. Although still only a Midshipman, he had the good fortune to be assigned to VF-51 in November. The squadron was in the process of reforming with new personnel and equipment following a deployment on Valley Forge. Although jet transition units had been established to check out pilots, Neil's first flight in a jet was solo in a VF-51 F9F-2B Panther on 5 January 1951. (The Navy was more casual about training then and yet to realize that more rigor was necessary to avoid a horrendous loss of pilots and airplanes.)

Air Group Five deployed aboard Essex on 26 June 1951. The picture of young Armstrong at the beach was taken during final workups in July in Hawaii. On 29 August, little more than a year after becoming a Naval Aviator, he flew his first combat mission. Less than a week later, a cable strung between two hills as a crude antiaircraft booby trap cut off six feet of one of his wings. He managed to herd the badly damaged jet out over the water where he could eject without much risk of capture. He went on to fly a total of 78 combat missions.

Armstrong left the active Navy in the fall of 1952—although he  continued to fly in the Naval Reserve through late 1960—and returned to Purdue. He graduated with a bachelor's degree in Aeronautical Engineering and joined NACA. It was a most satisfactory beginning to a storied career.

Thanks to the staff at the Emil Buehler Library at the National Naval Aviation Museum for the pictures. Many of the facts included above were taken from First Man: The Life of Neil A. Armstrong by James R. Hansen.
Posted by Tailspin at 5:44 PM 1 comment: 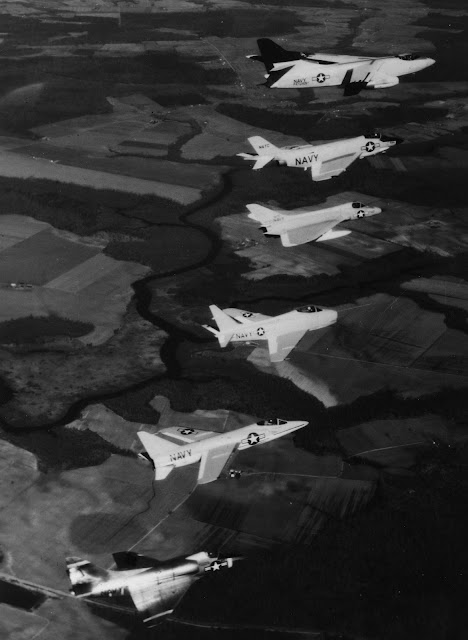 I'm not sure yet when this photo was taken but it is probably late 1955 or early 1956. The aircraft are all newly assigned to NATC for test and evaluation before being declared suitable for service use. Leading the echelon is an Douglas A3D-1 Skywarrior that was to be participate in at-sea carrier trials in June 1956 aboard Forrestal. The change from the overall blue to the gray/white scheme had just been decreed in February 1955, which is why its folding fin, rudder, folding wing sections, flaps, and ailerons are blue.

The two new all-weather fighters were the McDonnell F3H Demon that is next in the formation with a Douglas F4D Skyray below it. These are finally about to get to the fleet, having been in development since first flights in 1951. Both were delayed by the J40 engine fiasco (as was the A3D, but it had an earlier start) that required an engine substitution. The A3D and the F4D were subsequently powered by the P&W J57 while the F3H had to make do with the Allison J71.

The last three are all powered by the Wright J65 engine. From top to bottom, they are the North American FJ-4 Fury, Grumman F11F-1 Tiger, and Douglas A4D-1 Skyhawk. None of these three (or the F4D for that matter) were selected for development after a formal competition. The FJ-4 and the F11F (as the F9F-8 and then F9F-9) were initiated with budget designated for product improvement of a production airplane, the FJ-3 and F9F-6 respectively. The A4D rose from the ashes of the A2D program and was the beneficiary of its budget. (Before McNamara, the services had a lot more flexibility in airplane development.)

Most of the six were not as successful as hoped. The FJ-4 and the F11F were what the fighter class-desk officer at the time believed to be most appropriate for a day fighter: light, small, simple (inexpensive), maneuverable. The FJ-4 didn't even have an afterburner although Grumman had the foresight to add one to its F11F. As a result, the F8U, which was won a true competition against a specification that emphasized speed, almost literally blew them away. The FJ-4 fighter was relegated to the Marine Corps; the Navy subsequently bought some FJ-4Bs as an attack aircraft to give Ed Heinemann something to think about during early A4D development and production when it felt that Douglas wasn't being responsive to its concerns.

The F4D never got an armament capability that made it an effective all-weather aircraft. Although it deployed several times, it was really not suited for defending the carrier if the skies were cloudy. The Marine Corps operated it longer and didn't mind its shortcomings. The F3H wound up armed with the Sparrow missile, so it had a true all-weather capability. It also begat the McDonnell F4H Phantom and that alone justified its existence.

As for the big A3D and the little A4D, they both enjoyed long and honored careers, the A3D in part because it was big and the A4D, because it was little...
Posted by Tailspin at 8:01 PM 2 comments: