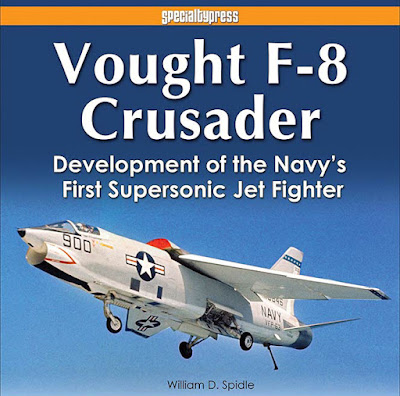 If you're considering buying this book—and you really should if you have any interest in carrier-based airplanes—note the subtitle. It covers the predesign, proposals, engineering design, test (and tragedy), and marketing (think record-setting) of the Crusader and its derivatives from Vought's vision of a true supersonic carrier-based fighter through their retirement. Look elsewhere if you prefer stories beginning "There I was, upside down, in cloud, on fire, nothing on the clock except the maker's name, when suddenly...". There are several available of that genre on the F-8, whereas there are none about it that go into this level of illustrated detail.

Bill Spidle is uniquely qualified to be the author. He had unfettered access to the Vought archives that were maintained by Vought-retiree volunteers and stuffed with documents, pictures, reports, etc. contributed by Vought employees over time. Rare among company archives (some now jealously guarded and almost unavailable to researchers by the company that had absorbed them), Vought's were accessible. In exchange, he helped review and catalogue the material for several years. As a result, his book incorporates pictures, illustrations, and information not only not previously published but which I had not seen before.

Another point to consider is that it is published by Specialty Press, which is once again adding to its sales catalogue of aviation books. As a result, it is a large format (10 inches square) tome with many color and high-resolution photos printed on heavy, glossy paper, a joy to behold and peruse.

One note on the subtitle: The Navy's First Supersonic Jet Fighter. The first ones to reach the fleet were the swept-wing placeholders for those with afterburners that the U.S. Navy had ordered after World War II, the Cutlass, Skyray, Demon, and Jaguar. Like them, however, the F9F Cougar and FJ-2/3 Fury could only break the sound barrier in a dive. And that includes the F4D Skyray, often cited as the first Navy fighter to be supersonic in level flight. It was stubbornly subsonic except in a dive despite Douglas' best efforts to make it otherwise (more on that in another post). Some might argue that Grumman's F11F Tiger was the Navy's first supersonic fighter in terms of level-flight speed since it was on contract and flew before the F8U Crusader did. However, its initial flight test was without an afterburner, whereas Vought test pilot John Konrad took the F8U supersonic on its very first flight. Moreover, F8Us were delivered to Navy development squadron VX-3 in December 1956 whereas the first F11F did not arrive there until February 1957 after a somewhat protracted development required to make it satisfactory for deployment.