3 September 2021: Revisions made as a result of additional research

Some airplanes just don't get any respect. The Vought F7U Cutlass suffers worse than most: "Ensign Killer", "the engines put out less heat than Westinghouse's toasters", "Gutless Cutlass", and so forth. And then there's the iconic photos and video of the VF-124 F7U-3 ramp strike: 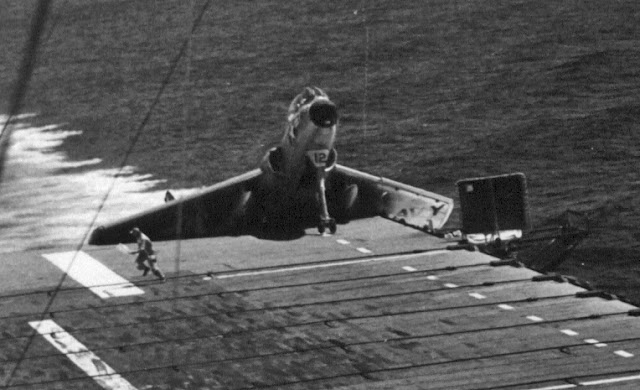 Yes, that is the LSO sprinting across the deck to get out of the way, which he did. Contrary to what's reported in various places on the internet, he wasn't hurt and there were no serious injuries to anyone else on deck. The pilot was killed.

In fact, the F7U-3 had about the same thrust-to-weight ratio as its contemporaries, the F9F-8 Cougar and the FJ-3 Fury, albeit in afterburner. And that's even though Westinghouse did not meet the original engine-thrust specification. Unfortunately, it was the first fighter with afterburning engines that the Navy took to the carrier. The pilots did not understand the trade off involved. Their initial perception was that "dry" engine thrust was only 2/3s of thrust in afterburner and using afterburner involved the burning of prodigious amounts of fuel, significantly limiting range and endurance. 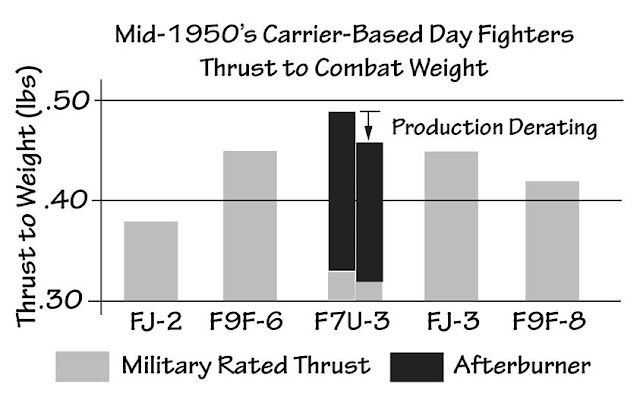 However, there weight and performance benefits of substituting a small jet engine with an afterburner for a big jet engine with the same thrust without afterburning and Westinghouse did subsequently deliver J46 engines with the originally promised thrust.

This reliance on afterburner for "full" power would not have been quite so evident but for the fact that the Cutlass lacked a horizontal tail. It therefore required a big, thick wing for low-speed lift since no horizontal tail precluded the use of trailing edge flaps; there was no means of counteracting the pitching moment change that was caused by them. This is a comparison of the F7U-1 and the F-86. 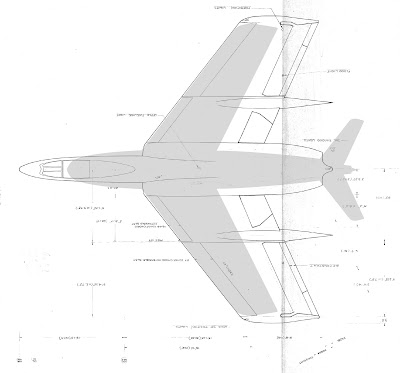 As a result, at low speed on a low, flat approach to an axial deck carrier, pulling the stick back to increase angle of attack actually decreased lift initially. The subsequent increase in lift was accompanied by a very large increase in drag. From the flight manual: "To change angle of attack alone results in excessive loss of altitude, and the rate of descent is so difficult to control as to preclude safe answering of altitude correction signals from the Landing Signal Officer."

So to recover from being low or settling meant adding thrust, preferably even before the pilot got low or settling began. Unfortunately, the relatively low military thrust and high drag at the angle of attack required to attain a low approach speed meant there wasn't much excess thrust unless the afterburner was used. Which was problematical with the early afterburners. From the flight manual again: "Because increases in angle of attack from flight conditions such as making a turn, stopping a rate of descent, and initiating a climb increases the drag, caution should be exercised to assure that the airplane is accelerating prior to entering the aforementioned maneuvers. (A waveoff) must be initiated relatively early because selection of (afterburner) is accompanied by a thrust delay lasting up to two seconds. For the first three seconds following power increase, better airplane acceleration is attained in military power; after three seconds a marked acceleration advantage is obtained in (afterburner)."

The horrific F7U-3 ramp strike was actually preceded by a routine approach and landing by the pilot. The accident investigation determined that the airplane was above the maximum approach weight when it crashed, which meant it was even heavier on the first, successful, landing. However, on the second approach the pilot got low and was slow to respond to the LSO's "come on" signals.

Another frequently repeated and undeserved observation was that the Cutlass had a "weak" nose landing gear. There were several incidences of nose gear collapses (including a fatal one) but they almost entirely due to either pilot error (landing short or long, resulting in an overload of the nose gear actuator when the nose wheels hit something) or mis-set/malfunctioning arresting gear/barrier engines, the abrupt stop again overloading the nose gear actuator. This Cutlass ran off the runway in Japan: 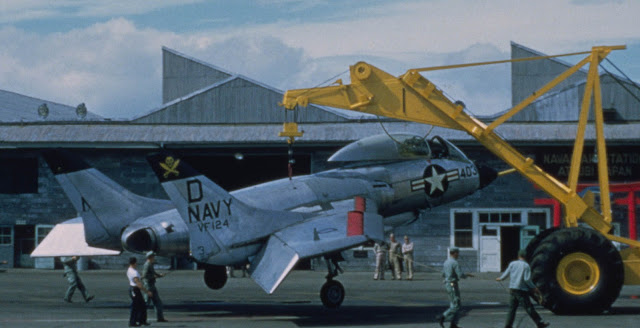 Contrary to another widely repeated canard, the nose landing gear strut never failed upward and speared into the cockpit, ejecting the pilot. There was one carrier-landing incident when a barrier malfunction caused an overload of the nose gear that caused the airframe attach point of its extension/retraction actuator to break loose. The upward movement of the fitting knocked the canopy off, which armed the ejection seat, and then it hit the seat's firing mechanism, ejecting the pilot. The aft side of the ejection seat headrest was modified as a result so it would only fire if the pilot pulled the face curtain.

The belief that the Cutlass was underpowered stems from the Navy's decision to repurpose the F7U-3 as a fleet air defense fighter armed with guided missiles. The addition of Sparrow I missiles, the requisite fire control system, and additional internal fuel resulted in a significant increase in weight; however, the Navy elected not to also add more thrust since the resulting F7U-3M was considered to be a placeholder until the Sparrow III armed F3H-2 completed development and qualification. That version of the Cutlass was therefore considered to be "under powered" although the thrust was adequate for the mission, particularly since its deployment was from angled-deck carriers employing a descending approach rather than a flat one. There were no incidents due to a lack of thrust.

Ironically, the F8U Crusader's handling qualities on approach were at least as challenging as the F7U's and its accident rate not much better even though it only deployed on angle-deck carriers. However, supersonic performance combined with outstanding endurance meant it was revered instead of reviled and ridiculed. 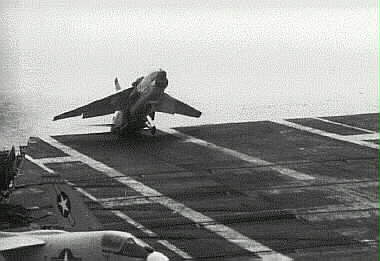 The Crusader pilot reportedly boltered with a badly damaged aft fuselage and was sent to the beach, where he landed without incident.

Posted by Tailspin at 6:49 PM No comments: