Snapshot of A Transition 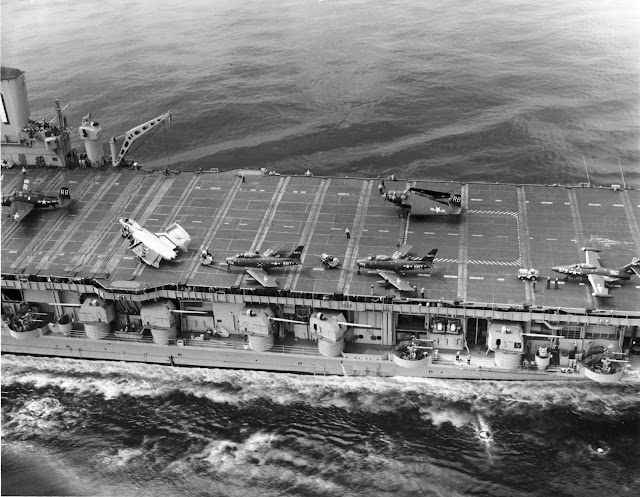 It's August 1952 aboard Midway. The Korean War has been raging for more than two years and the Navy still does not have a swept-wing fighter that can be deployed aboard its carriers. The natural-metal tailless Chance Vought F7U Cutlass was to be its first but has been delayed by development problems. A major redesign with a more powerful engine is finally ready for its first at-sea trials as shown here but it will still be a few years before it can be deployed. The Navy's other late 1940s transonic jet fighter programs are also delayed. Grumman's variable-sweep-wing F10F Jaguar will never get this far in its development. Both the Douglas F4D Skyray and McDonnell F3H Demon won't get aboard for another year and even then, only for an initial evaluation. Both will have to go back for carrier qualification trials after they are redesigned with a different engine.

The two swept-wing fighters on deck are XFJ-2s, minimal modifications of the very successful North American F-86 Sabre Jet that the Navy has had to turn to in desperation for an interim swept-wing fighter. As it happens, the FJ-2 Fury will be deemed only marginally satisfactory for carrier operations and have to be re-engined as well. Fortunately, Grumman was successful in quickly developing and qualifying a swept-wing derivative of the straight-wing F9F-5 Panther that is aft of the Furies. (It is probably aboard to evaluate a fix to reduce the F9F-5's stall speed that is being implemented after fleet pilots have difficulty in carrier qualifications in the jet.)

The two propeller-driven airplanes are Grumman-designed, General Motors-built TBM torpedo bombers that have been converted to transport people and cargo to and from the carrier as an early implementation of Carrier On-board Delivery (COD)
Posted by Tailspin at 6:46 PM 3 comments: