The Short, Tragic Operation of the F-4 Phantom by the Blue Angels 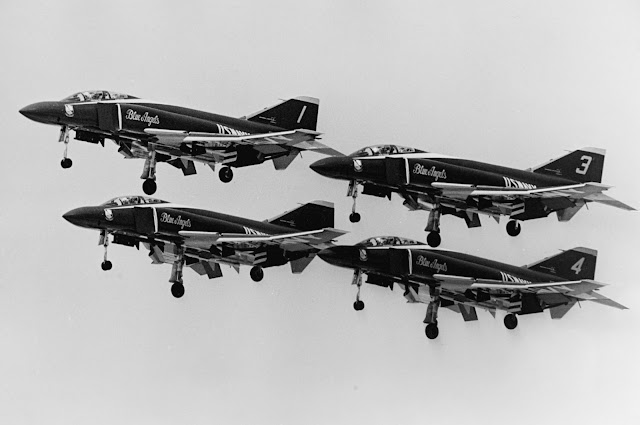 In the process of doing some fact checking on the operation of the F-4 Phantom by the Blue Angels, I discovered that many of the online articles about it are somewhat incorrect, beginning with the statement that it served with them from 1969 to 1974. In fact, the 1973 season was tragically terminated early and the Blues resumed flight demonstrations in early 1974 flying Douglas A-4 Skyhawks.

In 1968, the Grumman F11F Tigers, which had served the Blues well for a decade, were increasingly hard to campaign with. Various alternatives were evaluated, but by chance the seemingly ideal candidate was the so-called lead-nosed F-4J. The F-4J was succeeding the F-4B on the production line in St. Louis. The major changes were the AWG-10 radar and fire control system and the J79-GE-10 engine (the identical dash numbers were coincidental). As it happened, both were government furnished equipment and deliveries were behind schedule. The Navy agreed to let McDonnell complete and deliver the first of the Js with lead ballast in the nose (hence the nickname) and the B's -8 engines. Otherwise the airplanes were identical to the J configuration: removal of the IR detector under the radome, bulged inner wing for the bigger main landing gear tires introduced with the Air Force F-4C, lift improvements introduced late in F-4B production, etc. (see http://tailspintopics.blogspot.com/2012/12/you-cant-tell-phantoms-without-score.html)

There were 18 of these built, five in production block 26 and 13 in production block 27, BuNos 153071-153088. Although the Navy had other non-deployable uses for them, their assignment to the Blues was logical since neither the lack of a radar (which allowed the nose to be used as a baggage compartment) or the slightly lower engine thrust of the -8 engine was a drawback. The only external difference apparent from a -10 powered J was the visible portion of the afterburner nozzle (also see http://tailspintopics.blogspot.com/2012/12/j79-exhaust-nozzles.html).

The difference between the nozzles was more apparent when the engine was running but not in afterburner because of the different way the reduction in area for "dry" thrust was mechanized. 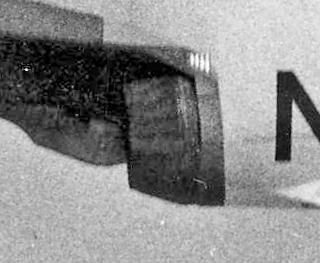 Many modifications were made to convert most of these Js to the Blue Angels configuration. These included installation of the Air Force anti-skid braking system, additional radio and navigation avionics, the smoke system, a gaseous oxygen system, etc. The flight control and throttle systems were also modified to provide more precise control in formation and early activation of afterburning. (Joe Debronski, McAir's chief test pilot at the time, flew a formation flight on the wing of the Blues leader at the time, CDR Bill Wheat, in 1968 as the latter put his F11F through the maneuvers required: "(Bill) had requested that I do this to help me understand the need for changes they wanted in the longitudinal control-feel system".)

Wheat accepted the first of an initial seven Blues F-4Js on 23 December 1968. Twelve of the lead-nose Js were eventually converted to the Blue Angels configuration and flown by them at air shows. Ten of them, plus one of the two replacement, -10 powered, Js were destroyed:

Half were the result of three midair collisions. Although trading paint was not unknown because of the extremely close formation flying that the Blues were famous for, actual collisions resulting in a crash had been rare up until then. However, up until the last midair only one of the crashes had been fatal.

Some internet articles also incorrectly identify the specific Phantoms operated by the Blue Angels. One of my F-4 subject-matter experts, Peter Greengrass, provided the following list based on F-4 Aircraft History Cards and other sources;

Note that 153077 is not on this list although it is sometimes identified as a former Blue Angels F-4J; Peter wrote that it was assigned for its entire service life to NATC, Patuxent River. There were also only two later Js assigned. In this picture of the two solos in formation, the -10 powered F-4J is inverted and the -8 powered one is right side up. 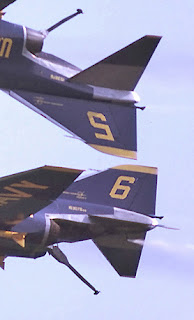 Peter also identified three F-4Bs that were briefly assigned to the Blues early on for training/proficiency/hack duties: 150996, 152982, and 153068. These were stock and did not sport the Blues livery.

1973 was both a triumph and a tragedy for the Blue Angels. It began ominously with a three-plane collision during training in March at El Centro. All three pilots ejected successfully but leader LCDR Don Bently was injured and had to be replaced by former Blue Angel LCDR Skip Umstead. In June, he led them on a multi-venue European tour including performances at the prestigious Paris Air Show. Tragically, he was killed along with Marine CAPT Mike Murphy and Ronald Thomas, one of the two Petty Officers flying with them when they collided during arrival at Lakehurst, NJ for a show.

That disaster ended the Phantoms use by the Blues and the 1973 season. It also almost resulted in the Blues being disbanded but in part due to the support of the Chief of Naval Operations, the team was reformed that winter with Douglas A-4F "Super Fox" Skyhawks (see http://tailspintopics.blogspot.com/2011/02/super-fox.html) that had been made redundant with the introduction of the Vought A-7 Corsair. A successful 1974 season resulted.

For more information on the F-4 Phantom with the Blue Angels, see the following on Ron Downey's excellent blog:

Information and Markings
Posted by Tailspin at 11:32 AM 6 comments: