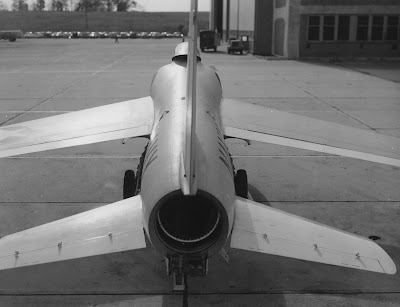 The area rule for transonic drag minimization was postulated and demonstrated by NACA engineer Richard Whitcomb. The rule was that the total cross-sectional area of an airplane should smoothly increase and then decrease. The result was that the fuselage cross section needed to be reduced beginning at the point of attachment of the leading edge of the wing and indented as necessary to compensate for the cross sectional area of the wing at each successive fuselage station going aft. The theory was provided to U.S. aerospace contractors in a confidential Research Memorandum in September 1952.

As it happened, Grumman had already defined and proposed an area-ruled fighter design to the Navy in December 1951. The result was the sleek F11F Tiger. Grumman went so far as to design special area-ruled external wing tanks for the Tiger.

Unfortunately, the engine chosen, the license-built Armstrong-Siddeley Sapphire, did not meet specified thrust. Although supersonic, the airplane fell well short of the guaranteed top speed. Performance with the substituted engine, the General Electric J79, was excellent but the Navy chose to standardize on the 1,000 mph F8U Crusader. Tiger production ended with only 201 built. After a very brief operational career with a handful of carrier-based squadrons, most of these were relegated to a training role. It also served for several years as the mount for the Blue Angels flight-demonstration team.
Posted by Tailspin at 9:43 PM 2 comments:

After World War II, it was by no means clear to all Naval Aviators responsible for the development of future carrier-based aircraft that jets could be safely operated from aircraft carriers. The powerplant division and the attack class desk at the Bureau of Aeronautics teamed up with Douglas to promote a turboprop variant of the new Wright R-3350-powered AD Skyraider. It was "designed as a general purpose carrier attack airplane and as a fighter of conventional arrangement and construction." The Aircraft Characteristics & Performance (ACP) chart went on to state that it could "function as a fighter with better climb performance and maneuverability at high altitudes than most turbo jet fighters." (The very unusual insertion of an advocacy statement in an ACP was indicative of the infighting involved.) Fortunately, the earliest jets showed enough promise that the dead-end development of turboprop and mixed powerplant fighters was ended. The XAD-3 proposal was carried forward as the A2D, which was eventually terminated after its flight test was plagued by problems with its Allison T40 turboprop engine, including one fatality.

Thanks to Ryan Crierie for a copy of the April 1947 XAD-3 ACP chart, the forerunner of today's Standard Aircraft Characteristics chart.
Posted by Tailspin at 9:35 AM No comments:

All the prior stuff about RATs was foreshadowing and vamping while I tried (and failed) to find a better copy of this McDonnell XF4H picture, which is a scan from a tattered Aviation Week cover. Although the long-lost cover caption may have identified what those open doors were for on the leading edge of the wing, it was a mystery to me until I recently read a Vought competitive systems analysis of the F8U-3 and the F4H and discovered that the latter originally had two RATs, one in each wing as shown. When the leading edge slats had to be extended inboard for slower landing speeds, this arrangement was no longer viable. The F4H RAT that I was familiar with as a McDonnell flight test engineer extended from the left side of the upper mid fuselage.
Posted by Tailspin at 1:25 PM No comments: