25 May 2020: A partial update of the original post; A complete update is in work for a forthcoming F7U-3 monograph for Steve Ginter's Naval Fighters series.

Although much maligned, the F7U Cutlass racked up a number of firsts or close seconds for Navy jet fighter airplanes. If Westinghouse had delivered engines with the thrust and fuel consumption that Vought and the Navy were expecting, its reputation might not have suffered so badly. Of course, the Navy would also have had to institute a more formal checkout program (NATOPS) and introduce the angled deck and descending carrier approach sooner. For more, see my monograph on the F7U-1 and my book on the development of U.S. Navy jet fighters. 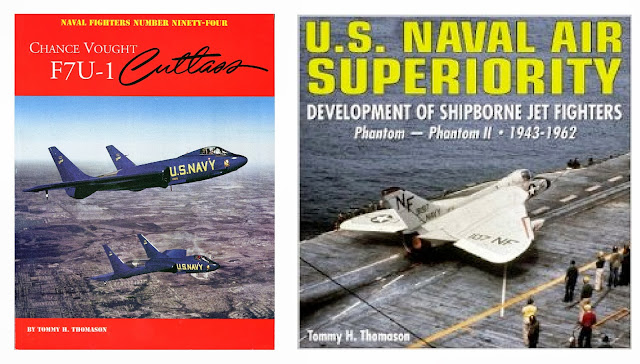 The F7U-3 was so late to the fleet and disappointing that the Navy made it a one-tour airplane, which meant that few went through a repair and overhaul depot after their initial operational use. Vought also incorporated some light but not very durable structure in the design, such as "metallite", a sandwich of balsa wood between thin sheets of aluminum, and magnesium skins/fittings. Both were prone to deterioration.

So it's somewhat surprising that there are any survivors on display or being refurbished for display. A few, of course, succumbed over time. There are fond memories of gate guards at NAS New Orleans and NAS Jacksonville (the designated repair and overhaul facility for the F7U-3) and playgrounds at the Wheaton Regional Park in Maryland and Holiday Park in Fort Lauderdale (BuNos 129722 and 129582 respectively, the latter last seen at Fort Lauderdale's Executive Airport). Another, 129680, was abandoned at NAS St. Louis (located on Lambert Field) due to maintenance issues while on a cross-country and subsequently towed to Jefferson Barracks Park in South St. Louis County for playground duty. However, all these were eventually scrapped.

There are, however, still a handful, a few of which are likely to avoid becoming aluminum cans for many more years.

BuNo 128451: The very first F7U-3, it was rescued from a Navy dump at Socorro, New Mexico for display at the Fred E. Weisbroad Aviation Museum in Pueblo, Colorado. Never restored and in poor condition, the airframe was transferred to the USS Midway Museum in San Diego, California for prospective use in their rebuild of BuNo 129565. However, because it was the prototype, very little of the structure was of use and it has been returned to the Navy for disposition.


BuNo 129554: It ended its Navy career at Geiger Field in Spokane, Washington (now Spokane's International Airport) as a maintenance trainer. Purchased by Len Berryman in May 1958 and displayed outside the Berryman War Memorial Park in Bridgeport, Washington from 1958 until 1992. In June 1992 it was sold to Tom Cathcart of Ephrata, Washington for restoration to eventual flying condition at the Museum of Flight in Everett, Washington. The incomplete project was subsequently sold to Al Casby of Project Cutlass in 2014 and moved to Phoenix, Arizona over the next few years. In October 2019, the move was completed with the arrival of the center section, including the inboard wings.