One of the useful aspects of the Vought F4U Corsair's long career is that it can be used to illustrate three decades of U.S. Navy color schemes and markings. With the exception of two schemes, one arguably and the other definitely experimental, it lasted from the "yellow" wings of biplanes of the 1930s through to the change to gull gray and white in the mid 1950s.

n.b. Federal Standard 595 was first issued in March 1956 to provide a reference for "Colors Used in Government Procurement." The colors are identified by five-digit numbers but no names. Before that, there was Federal Specification TT-C-595 issued in January 1950 that identified colors by four-digit numbers. It was preceded by  an Army/Navy Aeronautics Bulletins that identified colors by three digit numbers and names. For some, this will be a gross oversimplification of aircraft color specification history but it's not my specialty.

The XF4U-1 flew for the first time on 29 May 1940. In conformance with the exterior color scheme at the time, metal surfaces were painted with aluminized lacquer and fabric surfaces were finished with alumininized dope except for the upper surface of the wings (including the ailerons), which was painted Orange Yellow so an airplane could be easily spotted if ditched in the ocean. (It would float because like most Navy airplanes of the era, it was equipped with flotation bags in the wing.) 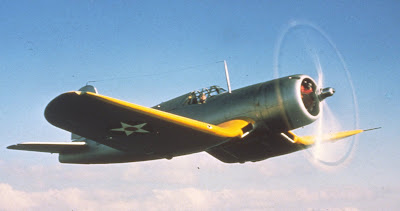 Note that the national insignia is a blue circle with a white star encompassing a red circle and that the propeller tip has bands of blue, yellow, and red.

The first scheme that the F4U missed (the first production airplane did not fly until mid 1942 and the prototype doesn't appear to have been repainted) was an overall Light Gray scheme with white markings that marked the prewar change to low visibility in early 1941 as illustrated by this Grumman F4F Wildcat. It also added the national insignia to the sides of the fuselage and removed it from the upper right and lower left wings.

The single shade of gray approach was short-lived and replaced with a Blue Grey over Light Grey scheme for carrier-based airplanes on 20 August 1941. On 5 January 1942, the national insignia was reinstated on the upper right and lower left wings. 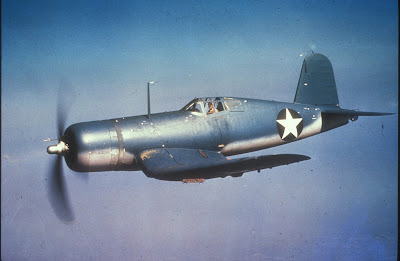 Note that the red centers have been removed from the national insignia as of 15 May 1942 in order to avoid confusion with the Japanese red rising-sun markings. (The original scheme, which did not appear on the first production Corsairs, also had red and white rudder stripes that somewhat detracted from the camouflage effect and were removed by the same directive. For more details, see http://tailspintopics.blogspot.com/2012/12/early-world-war-ii-usn-paint-and.html) 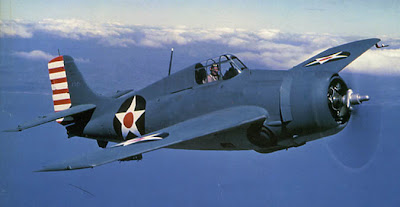 In January 1943, the U.S. Navy released a specification that replaced the simple Blue Gray over Light Gray camouflage scheme scheme with a complex one that employed counter-shading and counter-shadowing. Four colors were used: Semigloss Sea Blue on upper surfaces, non-specular Sea Blue on the wing leading edges, non-specular Intermediate Blue Sides, and non-specular Insignia White on the lower surfaces. Four-place national insignia were again decreed on 1 February 1943 in order to further minimize the likelihood of confusion with Japanese six-place markings.

It took some time for the Navy to repaint delivered aircraft and probably a month or more for the contractors to develop and switch over to color schemes in accordance with the specification. For example, VF-17, which was working up for combat, was still flying Corsairs in two-tone gray scheme with six-place national insignia when carrier qualifying aboard Charger in March 1943. 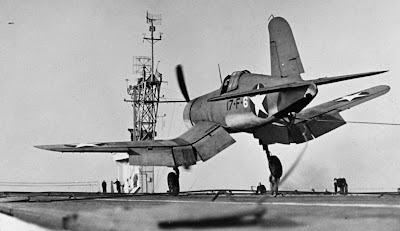 However, by the time that Bunker Hill was available for shakedown of its air group in July 1943, VF-17 had F4U-1s that had been repainted by the Navy rework/repair facility at Norfolk, Virginia in their version of the new multi-color scheme. (Click HERE for background on it.)

The addition of white bars with a red surround of the national insignia was decreed on 28 June 1943. At least one VF-17 F4U-1 received the change in time to participate in the pilot qualifications and proficiency operations on Bunker Hill in July. 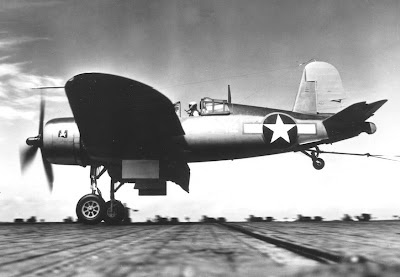 In August, VF-17 reequipped with factory new (and factory painted) F4U-1As for their departure on Bunker Hill to the Pacific. In September 1943 the red surround was ordered to be replaced by blue, again due to reduce the potential for confusion with the Japanese markings. (It had already been deleted in the Pacific by an edict on 31 July 1943.) Note the difference in demarcation between the upper and side colors on the repainted airplanes above and this one. 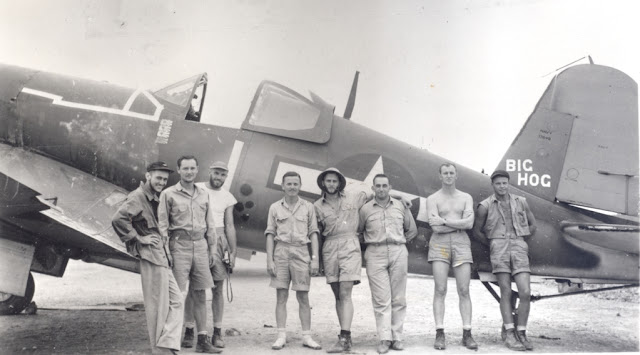 This VF-17 Corsair, BuNo 17640, is marked with 1 and "Big Hog" for the squadron commander, Tom Blackburn, who is fourth from the left. (The dark patches behind the "1" are reportedly repairs of bullet holes made when one of his pilots mistook his airplane for a Japanese fighter.)

The complex multi-color scheme was eventually replaced by an overall gloss Sea Blue one by a directive issued on 26 June 1944.

This provided a direct comparison of the Sea Blue and Insignia Blue, although neither may be accurately represented here. 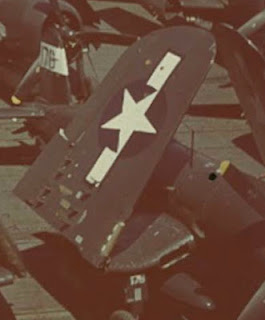 It was eventually suggested, probably by Grumman, that the Insignia Blue surround of the national insignia was redundant and should be eliminated on all-blue airplanes. It was reportedly deleted well before the official authorization to do so was issued in June 1946. A red bar was added in January 1947 to reinstate all the colors of the U.S. flag. 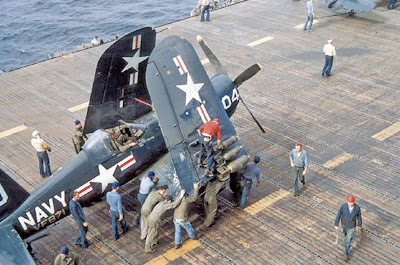 Although no Corsairs were involved in the experimental (and again short-lived) unpainted approach of the early 1950s (click HERE for a brief discussion), there was an F4U-1A created from various wrecked Corsairs by Service Squadron 11 of Marine Aircraft Group 11 based at Espiritu Santos (Vanuatu). However, it appears to be not unpainted but instead have been given an aluminum paint finish. "Sally" was marked on the cowling. 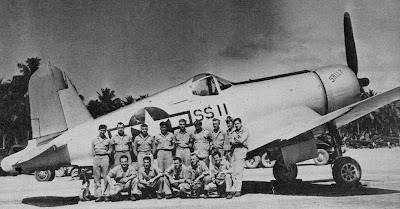 The Corsair lasted long enough in service, as the AU-1 attack version, to be repainted light gull gray (36440) and white in accordance with the change introduced on 23 February 1955. This one was assigned to Aircraft Engineer Squadron-12 at Quantico, Virginia, circa 1957, to provide training for air-to-ground controllers.

New soft-cover Corsair books well worth your consideration have been published recently: Jim Sullivan has completely rewritten and re-illustrated his F4U Corsair In Action published by  Squadron/Signal Publications. Is is a very good summary of the various versions with many previously unpublished photos. 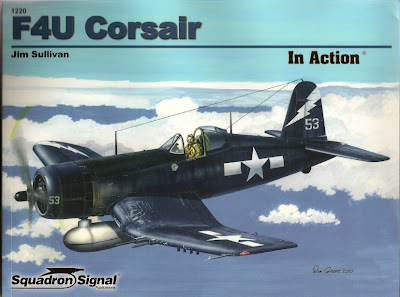 Rafe Morrissey and Joe Hegedus have authored The Vought F4U Corsair: A Comprehensive Guide, SAM Publications. As you might guess from the title, it provides more detail (and more than twice as many pages) as Jim's monograph, including coverage of the kits and decals that had been produced at the book's publication. 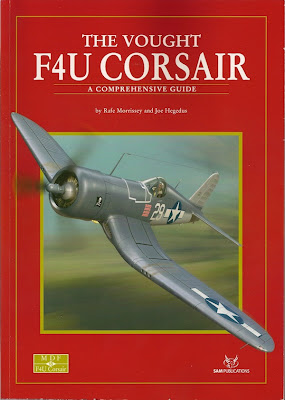