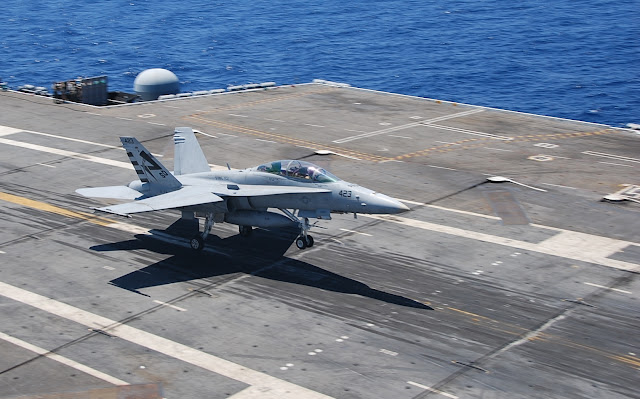 The unmanned aircraft being emulated is the Northrop Grumman  X-47B, which is currently in flight test and scheduled for at-sea carrier-suitability testing in 2013. 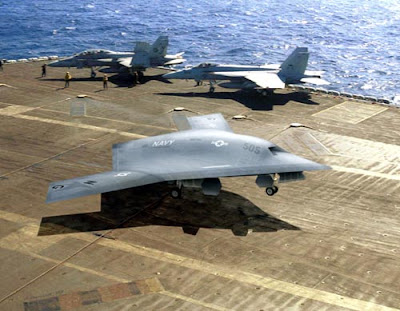 As it happens, the hands-off carrier landing capability has been around for a long time, with the first aboard a carrier being accomplished more than 50 years ago and used operationally since 1965. However, the X-47B system has to provide greater functionality—for example a hands-off bolter (a touch down with no arrestment)—and much greater reliability. since there is no pilot to take over when the electrons and ones/zeros begin to lose their way.

The impetus for a hands-off system in 1950 was the desire to minimize the shortcomings of jets with respect to all-weather operations and the amount of time that a carrier was unable to operate aircraft due to ship motion or ceiling/visibility. In those days, before inflight refueling, jets were unable to wait out poor weather due to their limited endurance.

Bell Aerospace won a competition with Honeywell and began developing the system in the early 1950s. It was ship-based, with a computer using radar data to determine the airplane's location relative to the glide slope and then sending corrections to the airplane's autopilot to alter its flight path to fly to and on the glide slope at the proper approach speed. All the pilot had to do was fly the airplane through an imaginary gate four miles aft of the ship on final approach and verify that the airplane was being guided by the ACLS, All-weather ( or Automatic) Carrier Landing System.

The first automatic landing of the Navy test airplane, a Douglas F3D Skyknight, took place in May 1954 at the Niagara Falls Airport, New York.

One addition required to the airplane in addition to an auto throttle was a corner reflector, seen above just in front of the nose landing gear doors, to insure the best possible radar data for the ship-based system. 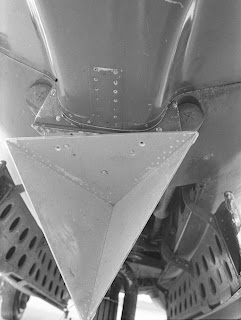 Part of the interval between the successful demonstration at Bell and the first landing aboard a carrier was dedicated to developing a ship-motion compensation capability. During the last 12 seconds before the touchdown, ship motion was included in the computations;  a second or two from touchdown, the corrections to the autopilot ceased and it simply maintained pitch and bank.

The first at-sea demonstration was on Antietam in 1957. At the time, the system was housed in large vans and not ready for deployment in the operating environment aboard an aircraft carrier. Redesign and environmental (shake, vibration, EMI, etc.) qualification testing was required now that proof of the concept had been demonstrated. 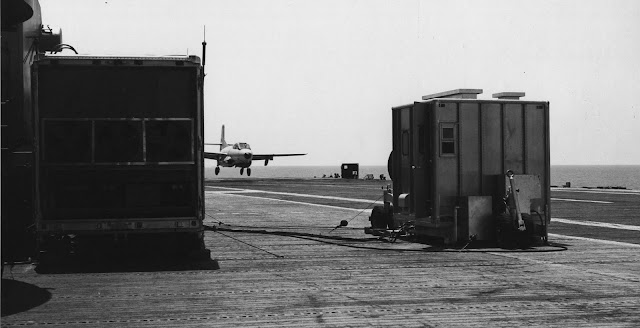 A production contract was finally awarded to Bell in March 1960 for the SPN-10 ACLS. NATC accomplished the first fully automated landings with the production system in June 1963 on Midway with an F-4 Phantom and an F-8 Crusader, modified for the capability. However, another round of development and improvements were required so the first operational use was delayed to late 1965, when operational evaluations were accomplished with F-4Gs, ACLS-modified F-4Bs, aboard Kitty Hawk. The capability was subsequently retrofitted to F-4Bs and incorporated in new production F-4Js. After a Vietnam deployment aboard Kitty Hawk with VF-213, the 11 surviving F-4Gs (one was shot down) became F-4Bs again. (Either the Navy's F-4G's existence was forgotten/considered irrelevant or used to disguise the purpose of yet another F-4 variant, the Air Force F-4G Wild Weasel.)

The radar reflector on the aircraft was substantially reduced in size and made retractable. On the F-4, it extended from a compartment just forward of the nose gear. 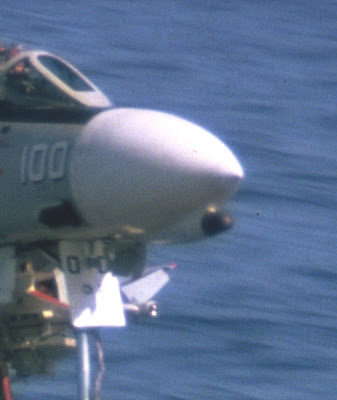 For a closeup picture and illustration of the reflector, see https://tailspintopics.blogspot.com/2017/08/f-4-phantom-acls-radar-reflector.html

On the F-111B, it was smaller and mounted on the upper link of the nose gear torque scissors so it deployed into position when the gear was down.

When the system was working, the performance was brilliant, the airplane coming down the glide slope toward a three-wire arrestment like it was on rails. As might be expected from the vacuum-tube-based technology of the time, however, reliability proved to be a problem. A field change was made to improve SPN-10 reliability but at the expense of its automatic touchdown capability: the pilot had to take over at weather minimums and make the final corrections before touchdown.

In 1966, Bell received a contract to "digitize" the system with solid state electronics and computers and restore full functionality. The redesigned system was designated the SPN-42. A subsequent improvement, the SPN-42A, incorporated an X-Band radar for better system performance in heavy precipitation. It was operationally approved in 1968.

Development of the next ACLS generation, the SPN-46, was begun in 1980 to take advantage of advancements in  gyro, computer, and radar technology. It was declared operational in 1987 after an operational evaluation involving Kennedy and F-14s. It is being continually improved but will eventually be replaced by a GPS-based system being developed as a joint service program, JPALS (Joint Precision Approach and Landing System).
Posted by Tailspin at 12:19 PM

At end of the paragraph just below the X-47 picture, I think you meant "begin" vice "being".

BTW, you going to Omaha?

Re Omaha, no: 1)I don't have anything new to sell (Scooter! won't be available until September and I'm still obsessing over getting the details right in the F7U-1 monograph) and 2) it's a bit too far.

Tommy,
Do you have any more information on the reflector that came down on the nose of the F-4G. Like shape and how it came down. The one picture you show it is a bit fuzzy and I would like to incorporate it into my drawings.

Tommy, in all my time in the Navy (mid 70s to mid 90s), we referred to the Automatic Carrier Landing System as ACLS, not ALCS. Was it redesignated as ALCS or is my mind getting fuzzy after all these years?

Oops - ACLS it is