The U.S. Navy carrier-based jets did not initially have nose-wheel steering. The reason at the time was that implementation was thought to restrict the turning radius, a critical capability for deck parking and taxiing onto and off of a deck-edge elevator. 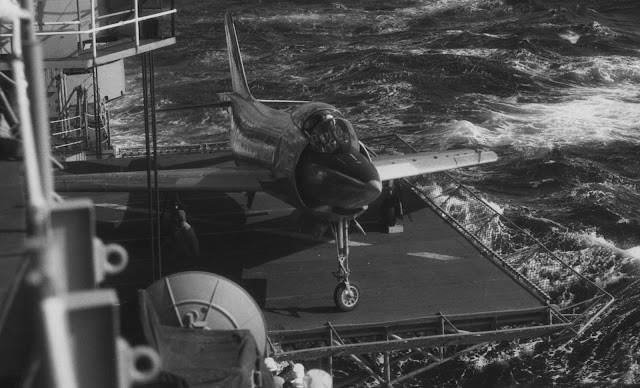 Judicious use of power and brakes was used instead. A tiller bar slipped over or into the nose wheel axle was sometimes used to provide more precise steering by a deck hand.

The deck crew would also sometimes just push on one side of a forward fuselage to help align the airplane with the catapult or for parking.

The free-castering of the nose wheel could sometimes result in an incident. This AJ was launched with the nose wheel facing aft. As a result, the nose landing gear jammed so it could not be fully retracted.

However, that did not preclude carrying on with the assigned mission. The nose wheel would almost always recenter on landing without drama. Some air groups had the right side of the AJ's nose wheel painted white to insure that the Savage was catapulted with it properly aligned. 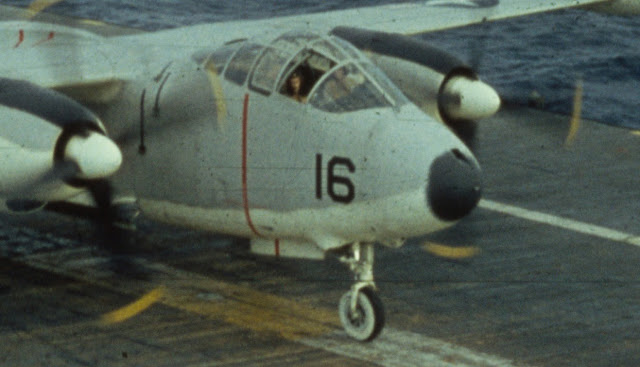 One of the changes that the Navy made to the Air Force's T-34 when it procured it for training was the removal of nose-wheel steering so that its aviators would learn to taxi without it.

The F7U-3 is reportedly the first Navy carrier-based jet with nose-wheel steering. It was big, it was heavy, and the forward fuselage was too far above the ground to be used for alignment by several sailors. Note the tiller bar. 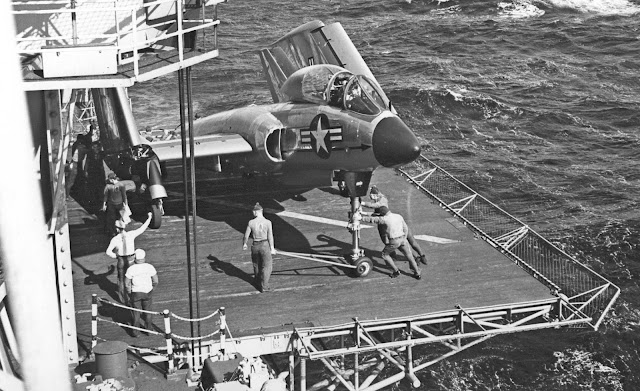 The actuator was added to the landing gear scissors. On most airplanes, a button on the stick grip enabled steering via the rudder pedals.

Most, if not all carrier-based airplanes were equipped with nose-wheel steering thereafter. In fact, later models of the A-4 Skyhawk, beginning with the TA-4, were equipped with it, probably to provide better crosswind takeoff and landing capability. 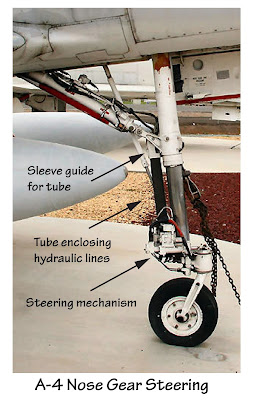 However, it reportedly did not provide fine-enough steering control for lining up with the catapult track. As a result, the tiller bar was often employed.

One problem with that was the risk of the pilot absentmindedly employing his nose-gear steering when the tiller was attached. It was then a large and very powerful bat. As a result, some A-4 squadrons removed nose-gear steering for a deployment. Also see Jeff Brown's report here: http://thanlont.blogspot.com/2011/11/scooter-stuff.html

Carriers have gotten bigger but the need for excellent steering control remains. 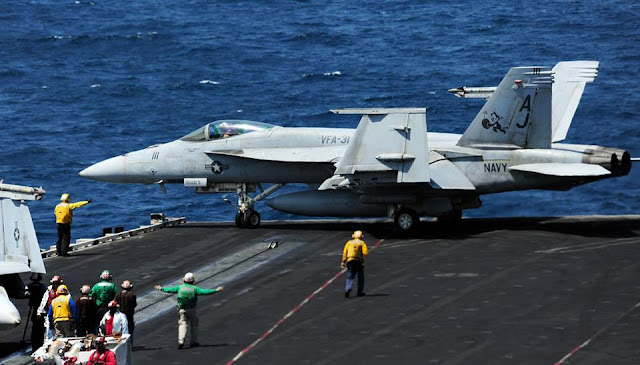 Tommy, the Savage picture causes me a silly question.
Assuming the dark panels on the engine cowlings are anti-glare,
why does it not extend onto the inboard sections of both engine
cowls instead of the tops only?