One of the interesting aspects of the maximum folded span of 27 feet six inches that set the wing span of the Skyhawk was that it was two feet less only a few years earlier.

I haven't made a complete review of folded spans but of the early jets, the biggest by far (not counting the FJ-1 and F6U that did not have folding wings but were to use a retractable nose gear feature to reduce the spot factor) was the Douglas F3D Skynight. Its mockup review was in April 1946 and the folded span appears to have been somewhat more than 26 feet. If this was a problem, it wasn't significant enough to be mentioned as a concern.  The folded span was measured on the XF3D-1 at 26 feet seven inches and shown on the F3D-2 SAC as 26 feet 10 inches. 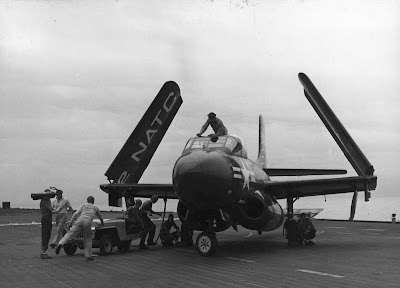 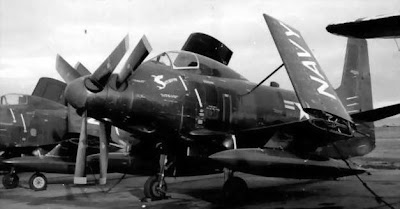 The Navy's report on the F4D mockup review held in March 1949 mentions that the folding scheme had originally been to manually fold the outboard four feet of each wing downward. Assuming that the wing span at the time was the same as the XF4D's, that would have resulted in a folded width of 25 feet six inches. "However, in later design studies it became apparent that the wing break would have to run diagonally instead of fore and aft. This necessitates wing folding upward. It was thought that manual folding would be unsatisfactory from an operational viewpoint, therefore power folding is required." There is no concern expressed that the folded span would be 26 feet two inches with the slats open. 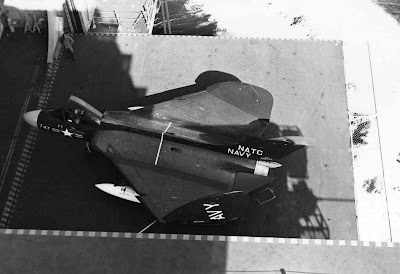 By the July 1949 mockup review of the McDonnell XF3H Demon, a limit has been established. "The Board requested the contractor to study the feasibility of providing manual instead of power wing folding. The unfolded span is not a limiting factor on carrier elevator and folding would be required primarily to permit passing of aircraft on CV-9 hangar decks. Since other operational considerations such as spotting on the flight deck did not appear to be seriously affected, the Board was of the opinion that the substantial weight saved by manual wing folding would be highly desirable in an interceptor. In addition, the contractor was asked to move the wing fold outboard, but under no circumstance is folded span to be greater than 25' 4" (max allowable to permit passing of aircraft on hangar deck)." 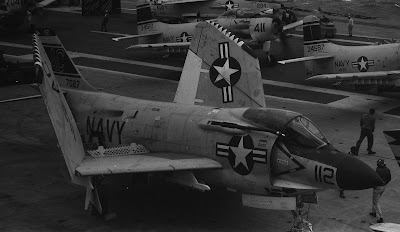 My current guess is that there were pressures to move the wing-fold joint outboard (lower loads on the fold joint and therefore somewhat reduced weight, for one thing). Since the pinch point on the hangar deck could be avoided by foresight in positioning aircraft, the new limit of 27 feet six inches was probably established in 1952 by the longer elevators being introduced on the Essex-class carriers modified in accordance with SCB 27A that were beginning to appear in 1950 and 1951. As shown in previous posts, this folded span permitted two airplanes to be loaded on the longer elevator at the same time.

How to explain the Navy approving a folded span of 28 feet five inches for the F5D at its mockup review in 1953? Perhaps because Douglas fit two in... 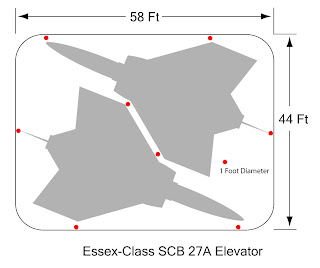